My one of the most memorable moment with Rimworld is day 1 game over lol.

A hungry bear decided to eat my pet cat in one bite, then decided to chomp on my 3 colonists too because clearly, a cat was more of an entree for the bear. lol.

Have fun with Rimworld!

Haha, yes it's actually a fun game to die in, it just takes a very different mindset..
Not that i enjoyed dying from basically not remembering how the hell i'm supposed to self-tend (it's really not that hard).

My current guys are doing ok. We Survived winter which had toxic fallout the whole time, with absolutely no animals or food in sight.. They had to resort to cannibalism (eating raiders). They weren't happy but they survived.

…this just happened, how romantic: 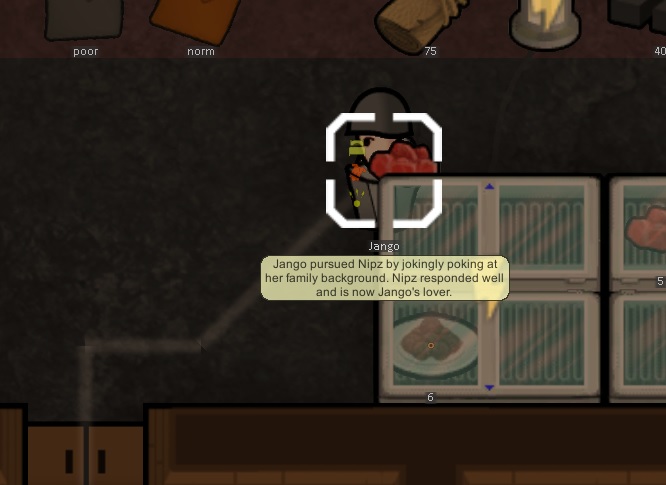 May 19th, 2019, 20:06
Still romping through Cthulhu….come for the combat, linger for the humour and fourth wall breaking commentary!
Quote

The dev has been out of his mind to not let this be a more commercial game since way back imo, he'd be a millionaire

I don't know about that. The game being free is really nice, even if, to some people, the graphics are shitty. You get way more than what you bargained for if you invest the time.

I totally get about the devs, both brothers, making money off the game. That is totally possible, but I don't think they would be millionaires. The game has a steep learning curve, which could block many people from actually buying it.

The only reason why they're putting their game on Steam is to pay off medical bills. One of them, I don't know which, is going through treatment. Hopefully putting the game on Steam will help.
Quote

I don't know about that. The game being free is really nice, even if, to some people, the graphics are shitty. You get way more than what you bargained for if you invest the time.

I totally get about the devs, both brothers, making money off the game. That is totally possible, but I don't think they would be millionaires. The game has a steep learning curve, which could block many people from actually buying it.

The only reason why they're putting their game on Steam is to pay off medical bills. One of them, I don't know which, is going through treatment. Hopefully putting the game on Steam will help.

One of the main reasons it has a steep learning curve is because the interface is not very beginner friendly.. There are numerous examples of complex games which has become really huge successes..Paradox makes very complex strategy games that can take weeks to grasp and they're still super hits.. i've worked on small indie games (Kenshi for example) and even though they are rather complex the creators has made a nice a buck (to say the least). I'm sure they'd pale to this if they put in real effort for graphics and interface tweaks.. The game already has cult status, all the bigger gaming sites will write about it when it arrives on Steam, so it'll sell a ton just from that alone.
--
Latest creations: Fallout NV: A Wasteland in Bloom / Fallout NV: WFO v3.5
Quote

May 20th, 2019, 16:27
Hopping between a few … Shadow of Mordor (stressful because of Nemesis/no manual saves), Lego LotR ( not so stressful! ), The Division (on Uplay so son can use my Steam account), Mirror ( amongst other activities you can stick a tentacle in a Nun's ass

May 20th, 2019, 23:46
Had a free couple of hours so playing some of west of loathing. No clue what I am doing and some of the puzzles while simple in nature are not as simple as they appear. Well done game but requires a wee bit concentration then I can afford right now.
Quote

May 20th, 2019, 23:51
I completed Cthulhu earlier today, so this afternoon I started up Dragon Quest eleven, finally! I'm enjoying it so far, the only complaints I have for now are you can only save at certain places, and exiting the game seems to be a logistical nightmare, for some reason. I only got in a few hours today, just long enough to tick off some king and get tossed in prison!
Quote

May 21st, 2019, 01:53
Dragon Quest 11 in a nutshell (not even puff puff scenes managed to save it, but at least made it somewhat bearable):
https://corpseruncomics.com/corpse-run-890-adolts/

The re-use of character models is… rather disastrous and incredibly immersion breaking. IIRC, the enhanced edition (which I'm playing of course) improved on this so I can't even imagine what it was like playing before.

It's… okay otherwise. The combat system is lackluster but serviceable I suppose, and man, I was getting annoyed with all those respawning drowners in the swamp.
On the other hand, I really like the setting and atmosphere, and there's some nice main- and side-quests.

In between Grimoire sessions, I've been playing the tried and true CK2, with the AGOT mod.

Solid choice. My favorite CK2 mod, the game simply lends itself perfectly to the setting. It's been a while since I spun it up, how is it?
--
Exitus acta probat.
Quote

Solid choice. My favorite CK2 mod, the game simply lends itself perfectly to the setting. It's been a while since I spun it up, how is it?

It runs smoothly and works best with the latest version CK2. I honestly think this is the best GoT-like game out there that's not a hack and slash RPG. I think I've played the mod more than the original game. I have no complaints.
Quote

May 22nd, 2019, 22:32
Playing a zombie apocalypse game that reminds me a bit of 7 days to die. It's called Road to Eden and it has you waking up on a road after being knocked out by the zombies. Your wife and daughter are missing, but you really have no clue where to look. This is your basic loot and build game with the zombies there to keep you on your toes. Human bandits are around also, so you have to be wary of weapon use when you run into those. Otherwise, this is pretty standard fare.

The game is early access, so I'm not sure how many zones exist at this stage. Even though there is a respawn mechanic, I generally start over if I die and I die alot

The game is early access, so I'm not sure how many zones exist at this stage.

Any word on how many zombies exist at that stage?

May 24th, 2019, 15:48
I'm getting pretty deep into Dragon Quest eleven, I've played maybe twenty hours so far. I like how the zones are set up, very reminiscent of Everquest one, and that's a huge compliment. Each area is a full and rich place to explore, and I do so checking every nook and cranny. So far the game has been fairly easy, none of the named fights have been very difficult, but I suspect it might get a bit harder as I progress further.
Quote

May 28th, 2019, 14:01
Puh.. I Need a break from Rimworld after getting absolutely obliterated.. it can be such a grim game.
Highlights: a colonist got sad (and lost her mind) after her dog died. She dug up one of the graves and displayed the corpse. My negotiator (a former prisoner of mine with a high social skill) got her to calm down before anyone else saw it. Haha, so weird, never seen that before.

Travelling outside the colony with 2 of my colonists (male, female) they set up a crappy little camp site to be able to mine for some rare minerals. Constant thunderstorms and then heavy rain.. Almost the entire map burned down. Lucky i didn't send them there for wood chopping.. They got into a social fight due to all the shitty conditions there. They calmed down, she had to patch him up. Later they fell in love. Awww.

The last, devastating raid.. Unknown heavy armored soldiers attacked, never seen them before or their weapons (way too powerful for us). They killed off everyone, burned down and destroyed much of the colony. The last survivors (2 pacifists, hiding inside the base) they eventually got to and kidnapped them. Game over man!
It's a little sad when you put so much effort into the base and characters, but these random and organically evolving stories are just so cool too.. I need a break and time to process lol.

Been playing State of Decay (YOSE) I quite like, more than i did years ago when i tried it briefly for like 2h. I've looked SoD 2 a bit, it doesn't seem as atmospheric, at least that's the feeling i'm getting, it's a little bit prettier but lacks grit. I really like the setting here, the cottages and small villages.. very Friday 13th'ish and Walking Dead'ish.
--
Latest creations: Fallout NV: A Wasteland in Bloom / Fallout NV: WFO v3.5
Quote

May 28th, 2019, 19:52
I finally finished with Deadfire and I'm now playing Unavowed. Its a point and click adventure game rather than an RPG, but it seems to have a fair bit of choice and consequence. The premise is that you have been possessed by a demon for a year and commited nasty crimes, and the police are after you - the game starts with a group of demon hunters (the Unavowed) exorcising the demon and then recruiting you into their ranks. Decent characters and story so far, I'm enjoying it.
Quote

May 28th, 2019, 20:37
Glad you are enjoying unavowed. I'm unreasonable excited for it for a while now. The premise seems just so cool for an adventure game (I watched the first 3 minutes). Hope to pick it up at its first discount.
Quote

Dragon Quest 11 in a nutshell (not even puff puff scenes managed to save it, but at least made it somewhat bearable):

My "inner cynic" says : "Shows who's *really* playing adult games …"
--
"Any intelligent fool can make things bigger, more complex, and more violent. It takes a touch of genius and a lot of courage to move in the opposite direction." (E.F.Schumacher, Economist, Source)
Quote

May 30th, 2019, 14:56
Me? If me then…
Yes and no. Got bored with so called adult games, just as majority of other releases it's stuck in the past. Noone is pushing forward, it's clones of clones with reskin.
Past few years when something was released, if there was nothing kinky inside, I kinda didn't care any more. Or dropped it when it got crappy. For example Harem Heroes started relatively okay but instead of improving content soon turned into yet another avoidware falsely advertised as adult RPG trying to milk you dry.
--
Toka Koka
Quote