Normally I'd agree, but I find it hard to be enthusiastic about a team that includes Ronaldo, great player though he is.

Yes, he is an obnoxious little poser.
--
"Where can the horizon lie, when a nation hides its organic minds in a cellar, dark and grim? They must be very dim." David Bowie, All the Madmen (1970)
Quote

June 26th, 2018, 13:15
So for Iceland to advance today they need to win and have Argentina win also, but by only 1 goal I think. Wonder how hard Croatia will play? Belgium is looking like the team to beat. The England-Belgium match will be interesting because they both will be playing to lose and they are tied right now. Could come down to fair play rules.
--
"From knowledge springs Power, just as weakness stems from Ignorance."
Quote

June 26th, 2018, 13:23
If there was a United Kingdom team could you imagine how many titles they would have won. Ireland, Wales, Northern Ireland, and Scotland all have some real good players and came close to qualifying. Too bad all the limey bastards can't get along

June 26th, 2018, 13:38
The UK is still very factional, unfortunately - even within the nations. The Protestant vs Catholic clubs in Scotland border on tribal warfare!
--
"Where can the horizon lie, when a nation hides its organic minds in a cellar, dark and grim? They must be very dim." David Bowie, All the Madmen (1970)
Quote

June 26th, 2018, 15:45
Indeed you can see it bleed out most of the time during matches anywhere in the United Kingdom. It seems the hooligans always have enough pocket money to travel somewhere to cause strife. I'd pay real money to see a few of them show up in Russia, can you say hello gulag? =p

Still, it would have been nice to see another UK team representing. Perhaps next time another team or two will advance.
Quote

June 26th, 2018, 17:13
How could we possibly know that? Their next match starts in cca 3 hours from now.
Feel free to use crystal ball before it finishes.
--
Toka Koka
Quote

How could we possibly know that? Their next match starts in cca 3 hours from now.
Feel free to use crystal ball before it finishes.

Consolations to Iceland though, maybe next time!!! And Argentina made it through by the skin of their bloody teeth.
Quote

But surely htey had a previous match before their next match.

And? Top two teams (points wise) from groups move forward. Iceland lost tonight and it's the end for them in this "championship" (world cup). Although I'm with the opposite side obviously, Iceland's display tonight is worth of respect. They've practically appeared only a few years back and every time they're playing better than before.

June 27th, 2018, 03:59
Hey, I never cared what the title of the thread was, I'm just happy to see others discussing the best sport on this planet. Yup, love my hockey and rugby, but football is just the best for so many reasons.
Quote

June 27th, 2018, 10:41
Well, i made up my mind. I clearly support every team that playes against Argentina. So dissapointed with Maradona. Giving the finger to who? The Nigerians, one of the biggest football power of the world? Ppff..
Quote 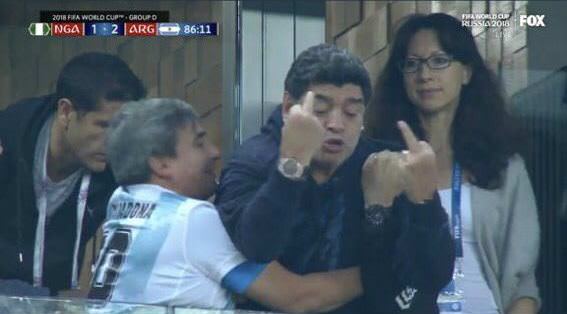 No surprise in the South Korea vs Mexico match-up, except I'd say the Koreans were pretty game in the conflict. They gave the Mexicans a pretty good battle, in my opinion. It could have gone either way.

Well, Australia is out

crossing my fingers for Korea vs Germany but realistically, not much hope for korea to make it to top16.
--
Favourite RPGs: Baldur's Gate II, NWN: The Aielund Saga, Pathfinder: Kingmaker, Icewind Dale I, Stardew Valley
Quote

June 27th, 2018, 14:03
Iceland had so many chances in the first half against Croatia and Nigeria but when you don't convert those chances bad things happen. Iceland played hard and for a first World Cup they have nothing to be ashamed of.

Now I just want to see exciting games and will root for England or Belgium. Would love to see a first time winner.
--
"From knowledge springs Power, just as weakness stems from Ignorance."
Quote

crossing my fingers for Korea vs Germany but realistically, not much hope for korea to make it to top16.

What's this in F group today? Only one match left and anyone can pass, even Mexico with two previous wins isn't safe. Crazy.
Sure, Korea winning is near impossible, but in this sport nothing is 100% certain.
--
Toka Koka
Quote