I feel that there are continuity errors in the questing

More like continuity bugs.
A few of us already posted questgiver thinks the target is dead when just stunned or alive when killed, and yesterday I got a SMS from the brawl sidequest guy who I didn't take the car from asking me what am I doing with his car is it in the garage or I'm driving it all over the place.

Couch, I know you have finished your first play, could you pop under a spoiler tag what level you were when you finished to give me some idea of where I might be at.

Dunno about him but I can tell you mine without spoiler tag.
- I'm stalling the point of no return main quest (some letters and numbers)
- There is no blue NCPD activity on the map, cleared them all
- There are only two side quests not done (also bought all the cars)

I hit the cap and am level 50 both general XP and street cred.
No I did not grind trashmobs all over the map. If crimos are not aggressive I don't touch them.
Only in two stealthbased sidequests I did not kill/KO all hostiles. In other such sidequests I cleared the area of all "guards", turned off all cams, disabled most of mines and looted/hacked everything I could.
Only one psycho I killed (I believe it's a bug, but in the end seems that one didn't matter), the rest I managed to KO.
I actually read shards and in some blue mappoints there was an additional "secret" (people locked in a container, people locked behind an underground door).
I got chased by the police a few times, only once I didn't run but killed them.

Difficulty - normal (didn't switch it anywhere).
The game has plenty of XP to gain without grinding nonmission trashmobs.

One thing to remember is some quests aren't automatically given.

Some you have to call to activate. some require a certain street cred level.

December 22nd, 2020, 00:21
One of my favorite things now in C2077 is driving my motorbike all around listening to tunes. Its relaxing and fun. Especially on the outskirts where you can open up the throttle.

I sometimes spend close to a half hour doing nothing but driving and listening to music. Other times I drive around and get into scraps with criminals or simply explore.

Poor V has a lot on his mind these days so its a good way to let off steam and energy.
--
Character is centrality, the impossibility of being displaced or overset. - Ralph Waldo Emerson
Quote

December 22nd, 2020, 02:59
I'm about 47 hours in, and have reached a certain Point Of No Return. Got there with a healthy mix of main quest, side quests, and map-points. I still have some lesser side quests left and gigs left, but an absolute heap of map-points I haven't investigated yet. Sometimes they're a bit generic, but sometime they can lead to a surprisingly well fleshed-out job.

Even after all that, I haven't really got into the brawling circuit side of things, or tried the mantis-blade ninja route, so heaps left to look at.
--
Proud leader of the Shit Games Liberation Front
All your shit games are belong to us

December 22nd, 2020, 03:37
Gigs do not affect the finale.
Vehicles neither.
Other type of sidequests (yellow exclamation marks), half of them I think, do.

Blue points of interest have no effect on the final questline.

After 110 hours I'm done.
Took the nomads route in the finale and I quite like it's bittersweetness.
As I have the save game intact I'll try the other two choices too. Not today though.

A tip: Don't bother to loot stuff in the final quest, you can't keep any of it.
--
Toka Koka
Quote

December 22nd, 2020, 20:00
Hmm. Not that I'm there myself, or will be for a while, but I've seen reported in several places that after the main quest ends you're able to continue in NC, doing gigs and such. So I would think you'd be able to keep that loot.
Quote

December 30th, 2020, 02:02
The bugs sucks extra much in this type of game which is so very big on immersion. This game can be so damn immersive, but then I'm taken out of it by some weird ass bug. Almost every quest has at least 1 bug

December 30th, 2020, 03:54
One of the lucky ones - got 100 hours in with pretty much zero bugs. I do see graphic glitches from time to time - floating item, stretched out dead corpse arm, occasional cut scene with some item not where it should be … but all really minor and not much different from other games I have played before they got patched up.

Nothing immersion breaking for me but then when it comes to immersion I am already used to blocking out the fact I am looking at the monitor, that there is an inventory, mouse, dialogue choices I have to make (don't do those in real life), and much more. Fairly easy to just ignore a glitch here and there compared to all the rest.

This week I completely cleared Watson in act one before going to act 2. Did every main quest, side quest, gig, police scene, and criminal place. Never had any big issues. Very rare actually.

Playing the game in parallel with 4 friends on Discord in our "tavern" channel and they say the same thing. Course I know that is all very ad-hoc and I have scene videos of big bugs and crashes and so on. Some of that is also probably related to the power of the rig they are using. Others just seem to have more bad luck. But most of the folks I know playing (including Nexus and Flickr) have all reported the game as a major win for them and they have had few issues. They are all playing on the PC though with at least a 10XX to 20XX card GTX card.
--
Character is centrality, the impossibility of being displaced or overset. - Ralph Waldo Emerson
Quote

December 30th, 2020, 04:48
The main quests have been completely bug free for me, but I've encountered lots of minor bugs and glitches in the smaller sidequests, and a few not so minor ones as well.

One of the nastier bugs I had…

Spoiler
In the quest where Delemain asks you to track down and retrieve his rogue cabs, for some reason the scanner he gave me wouldn't initiate no matter how close I was to the cabs or how long I stayed near them.
Quote

December 30th, 2020, 05:07
Yea that is a bad one. I don't think the game is bug free by any means. Just that me and my friends have been lucky overall. I have had two small quest bugs. One I was able to resolve with a reload. The other I had to go back to an earlier save.

Also seen in one of the cinematic dialogues someone holding a bottle of wine instead of their hand being empty.

And one time when taking a call from Regina she teleported right behind me for some reason. As soon as I moved a few feet she vanished. I wrote it off as a holographic image

For me and others I have chatted with, however, the game overall has been plenty playable on the PC at least.
--
Character is centrality, the impossibility of being displaced or overset. - Ralph Waldo Emerson
Quote

Just had another annoying one, not gamebreaking or anything, just annoying. 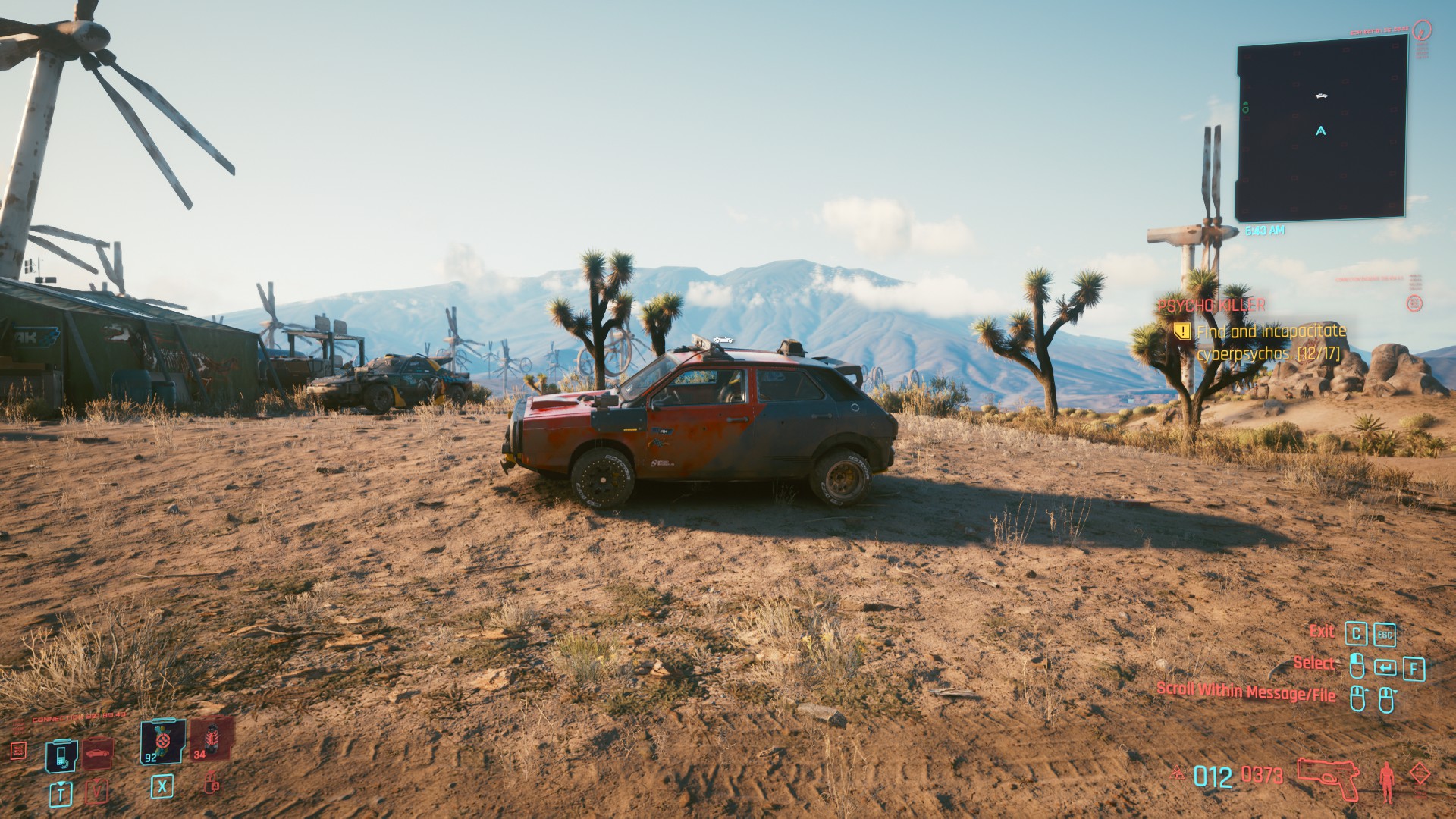 See the hints on the bottom right on the screen. Got this after using a computer terminal and it won't go away no matter what I do. My only option seems to be to turn off hints entirely in the options menu.
Quote

--
Think of how stupid the average person is, and realize half of them are stupider than that.
Quote

See the hints on the bottom right on the screen. Got this after using a computer terminal and it won't go away no matter what I do. My only option seems to be to turn off hints entirely in the options menu.

You'll notice the same thing happening with subtitles sometimes after loading an autosave. If you find yourself with subs stuck on the screen, just go to the menu and toggle them off and then back on.
Quote

December 31st, 2020, 01:02
Yeah, I got those glitches as well. I even had some BD and hacking related messages stay up. But I've still yet to have any completely game-breaking bugs or CTDs. Plenty of minor ones like floating cars, or accidentally sitting "inside" someone in the driving seat.

I'm at 64.5 hours, and for the last 20 hours or so I've been at the point of no return as far as the MQ goes, but I keep finding decent side quests. This game has way more content than some early reviews lead me to believe.
--
Proud leader of the Shit Games Liberation Front
All your shit games are belong to us

This game has way more content than some early reviews lead me to believe.

It's because most reviewers only played the main quests and that makes the game short around 25-30 hours at best. The gigs and hidden quests are the meat of the game.

Not kidding the side content extends the game by 50-60 hrs depending on how you play.
--
Think of how stupid the average person is, and realize half of them are stupider than that.
Quote

December 31st, 2020, 01:18
Nah, nothing works with this particular bug. Tried reloading, tried restarting, tried flipping on and off. Still there.

Only option that works seems to be having hints flipped to off.
Quote

December 31st, 2020, 16:36
Had a major sidequest break for me just now. Had to reload to an earlier save several times until a dialogue triggered all the way through, so that I could finish it. First reload it got a bit further in the dialogue, but not quite all the way. A couple of tries later the entire dialogue progressed as it should. Fun times!

On a good note, the HUD-bug mentioned above seems to have sorted itself out after a couple of missions.
Quote

December 31st, 2020, 23:42
Seriously?
Well, in Cyberpunk I didn't get two Jesus walking on water instead of immersing into it: 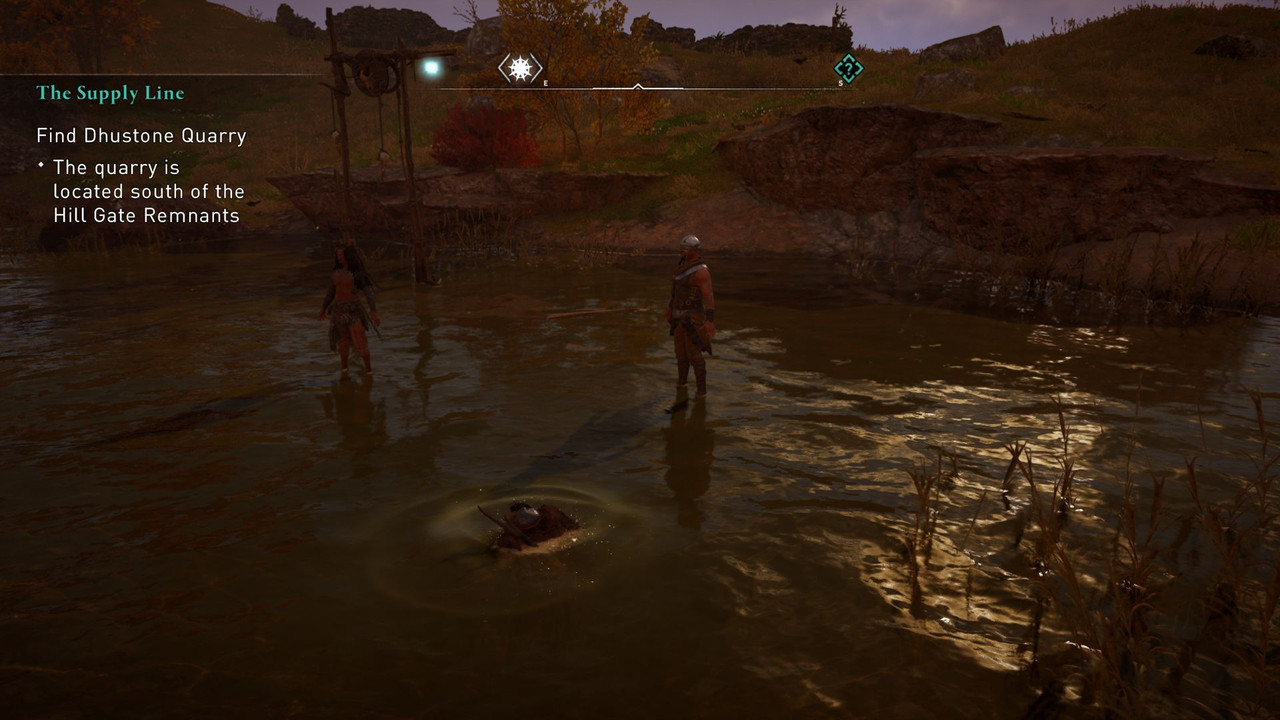 For those who don't know, this is AC Valhalla scene. And one of it's numerous bugs.
--
Toka Koka
Quote