Das Geisterschiff is a turn-based adventure/dungeon crawler hybrid (with survival horror elements) set in a cyberpunk world where you get to pilot your own mech and fight for the corporation.

The game is heavily inspired by the survival horror genre. The resources are scarce and if one wants to improve their stats, they need to explore and seek upgrades as well as workshops to apply them. Because of that, the combat is risky and one needs to master it or learn when (and where) to run in order to stay alive. Full recovery is only possible between the missions and short-term thinking will lead you nowhere. 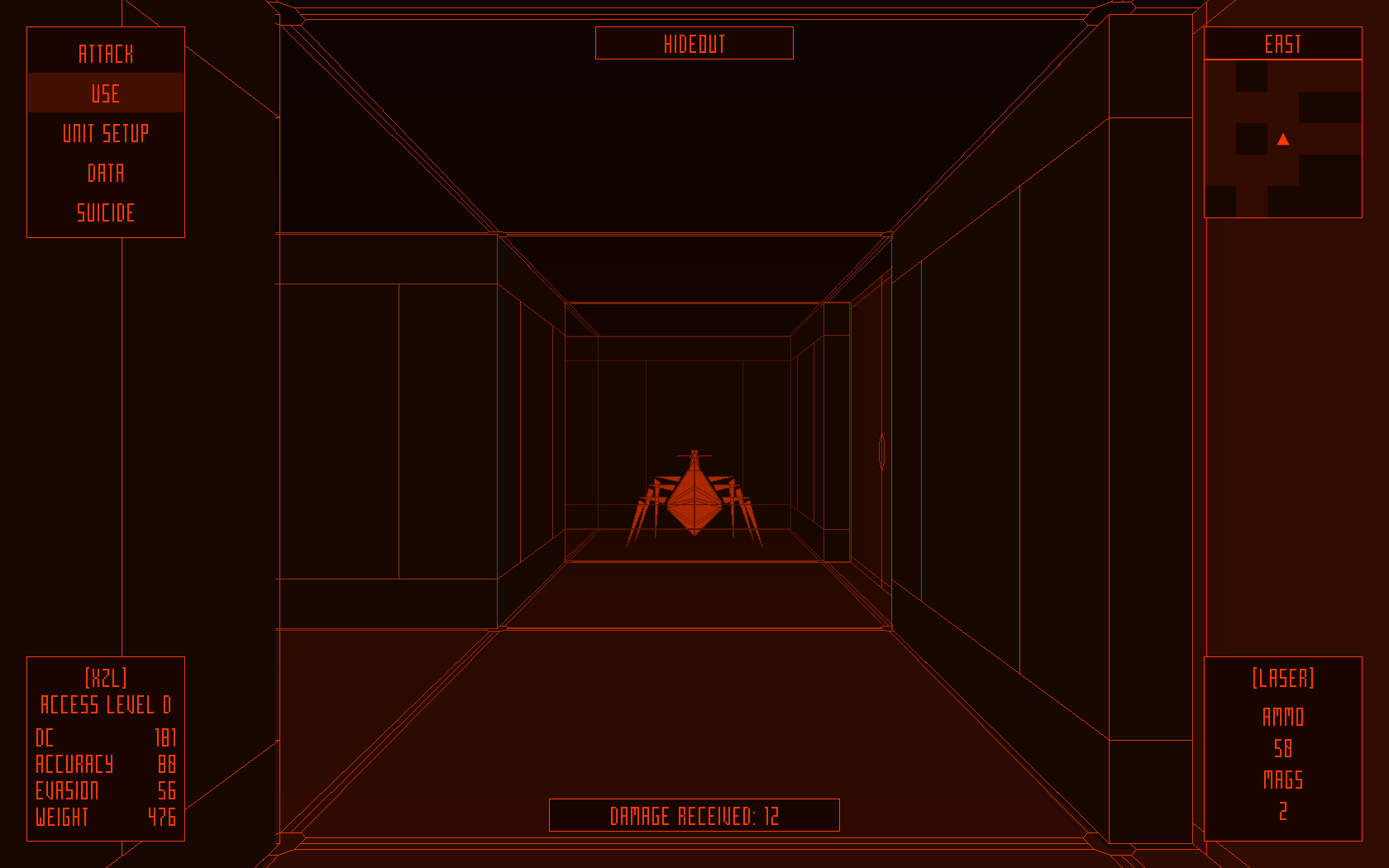 I'm seeking some honest feedback, so your impressions are very appreciated.

Looks interesting! I'll download the demo next week and give it a go.

Enjoy! Some things may feel too different to a dungeon crawler fan, but I'm working on a small tutorial chapter to give the players some sort of a learning tool.
Quote

February 18th, 2018, 09:59
Just in case: the demo has been updated with a critical bugfix and some small tweaks. More information @ changelog.

February 19th, 2018, 20:11
Hey @zwanzig_zwoelf, I played the demo tonight for about twenty minutes. My thoughts were:

Graphics - I liked the wireframe style. It doesn't translate so well in the screenshots, but the movement is smooth and walls, floors and doors are all very clear and easily discernable. Its also kinda stylish! A bit more variety wouldn't go amiss though, and the environments were a bit static on the whole. When I found the room with the spinning mines I thought they were a neat graphical touch, a few more "moving" props or things like that would be nice.

Sounds Yeah good. The background sounds were atmospheric, very foreboding, and the effects for my guns etc worked well.

) they worked quite nicely. I liked that there were options to close ground on your enemy and "bash" them at close range or retreat etc. It looked like the different types of guns might offer some interesting tactical choices but I didn't experiment with them. I liked the way that enemies weren't always immediately identified so I didn't always know what I was getting into.

exploration I think there's potential here, but I didn't really enjoy the demo level to be honest. The map consisted of a lot of identical paths leading to doors that usually opened only one way - so you could go through them, but then not get back unless you bashed them open at a cost to health - so I basically spent my time trying to work out in which order to progress through the maze so that the doors would open the right way. It felt like I was slowly working through a fairly frustrating puzzle rather than exploring the lair in a satisfying way.

Overall, I think there's potential with das Geisterschiff and I look forward to seeing what you do with it. Thanks for posting the links!
Last edited by Pongo; February 19th, 2018 at 21:22.
Quote

February 21st, 2018, 07:37
Hey Pongo, thanks for trying the demo and providing fair feedback. I'm currently going through the notes taken after the latest update and going to make some adjustments to the gameplay and also the first level to make the area a little bit less frustrating to navigate without changing the overall structure of the level. I'll make sure to post an update once it's done.

February 28th, 2018, 09:56
I had the chance to try an early demo of this and it was very promising, I advise everyone to check it out.
--
--
Exiled Kingdoms, the classic RPG in your pocked
http://www.exiledkingdoms.com
Quote

Spoiler – Changelog
Additions:
-- Added "move back" function to the S and Numpad 5 key. The functionality of X/Numpad 2 remains, though.
-- Doors are shown on the minimap now to make escape routes easier to plan.
-- Added a menu to the death screen which allows you to load a savegame, restart the current map/chapter or quit the game.
-- Savepoints are now used while loading the game or restarting a chapter.
-- Added more details to the Tunnels level.
Changes:
-- Notification about unapplied armor upgrades has been added to the status report.
-- Hitting the wall by accident no longer ends the turn.
-- Reloading with a full mag no longer wastes the mag and results in an end of the turn.
-- UI tweak: UNIT SETUP > WEAPON MENU > RELOAD now reloads the currently equipped weapon.
-- ESC key can be used to skip the text faster.
-- Certain strings have been slightly modified.
-- Certain upgrades are applied upon pickup now to reduce backtracking.
-- The color of doors has been changed to make them easier to see on the minimap.
-- Balance has been revised.
Fixes:
-- Fixed an oversight where bazooka attack sound would play twice.
-- Fixed a crash which would occur if the player saved at certain spots and loaded the game from another level.
-- Fixed improper loading of player save data if the player was located in a different level.
-- Fixed feedback effect from ramming appearing at wrong times.
-- Fixed the UI not refreshing upon applying soft upgrades.
-- Fix to a minor issue where the enemy would turn towards the next waypoint from their expected new position even if their current position hasn't changed due to obstacles/other reasons.
-- Enemy AI has been refactored.
-- Minor code optimizations.

Played it and made some notes, maybe those can help you somehow:


Thanks for the feedback, HobGoblin42!

I'm considering the shift to more ambient music depending on the area. The style was chosen as a mix of ambient and engaging music to suit the exploration and combat at the same time. Atmospheric sounds are under consideration right now, it's more of a matter of finding the right sounds and the right places for them.

Footsteps and idle sounds were considered but currently on hold until I pick the right sounds and timing for them. Also, attack and death sounds are present in the demo, or you meant additional sounds?

Automap was never considered tbh and the minimap is more of a tool to track the enemy movement as well as the state of certain objects to plan your escape routes or attacks. As for the faster movement when holding down Shift -- great idea, will definitely look into it.

I'll look into your notes again a bit later, some of these suggestions are spot on. Thanks again.

June 2nd, 2018, 15:49
After two years of work on this project in my spare time, multiple restarts from scratch and over 9000 Virtual Boy jokes, the beta version of Das Geisterschiff is finally available for those interested in getting more than just a demo and supporting the final stages of the development.

The beta version features the first half of the game, which is set on Earth and offers 2-4 hours of gameplay (depending on how fast you'll learn the mechanics and your playstyle) and should be pretty much finalized at this point and allow you to prepare for the second half of the game and the ghost ship itself.

You can grab it here as well as the updated demo: https://surt-r.itch.io/das-geisterschiff

The Demo was also updated so hopefully you'll be surprised by these improvements and changes.

Reminds me of System Shock but turn-based. Nice.

Thanks! System Shock is one of the main sources of inspiration for this one.

What in the name of god, have you created here zwanzig? Feels like staring into the abyss.

A game where the abyss stares back at you, of course!
Quote

August 26th, 2018, 15:35
At first I was on the fence about the look of it, but I'm certainly loving it now. Surprisingly atmopsheric too, which I suppose says a lot.
Quote

Das Geisterschiff launches on September 19 on Itch and December 13 on Steam. 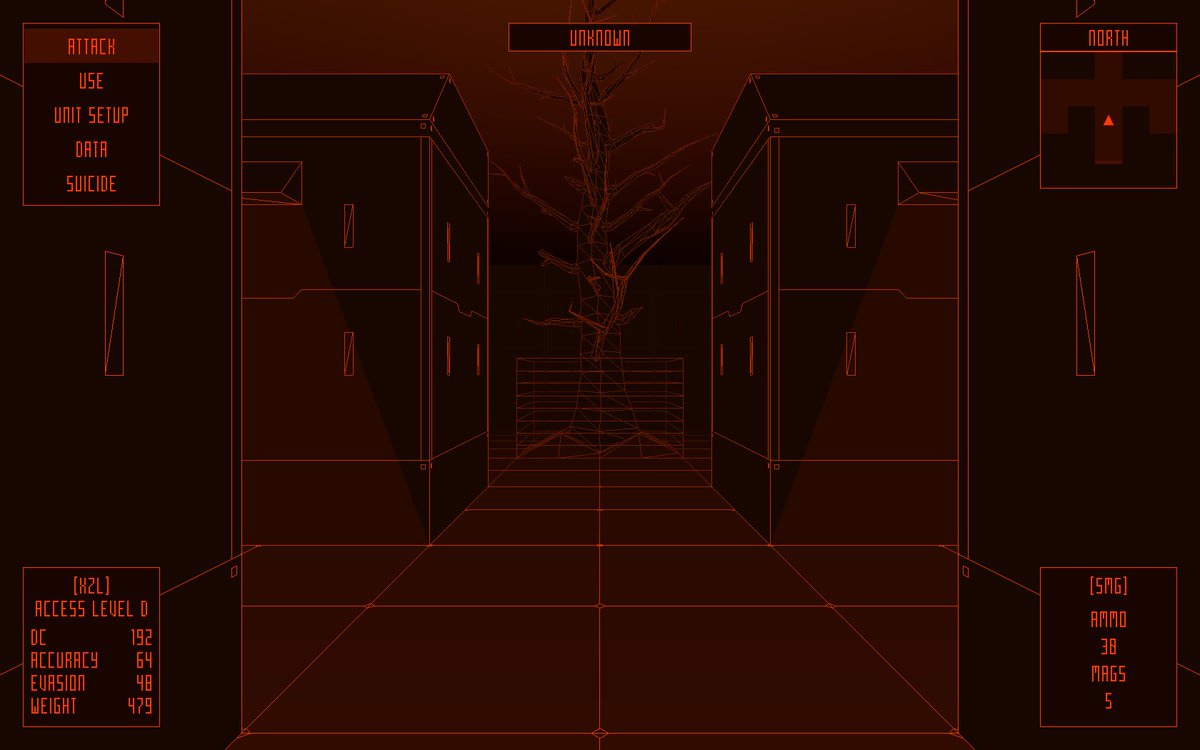