May 13th, 2018, 17:35
Wow! This looks really good. Totally off the radar too. Please keep us in the loop as much as you can. I really like the models.
--
c-computer, r-role, p-playing, g-game, nut-extreme fan
=crpgnut or just
'nut @crpgnut
aka survivalnut
Quote

Just small update. I have reworked the UI. I guess it's better now. Much better… Also you can see my draft of base abilities and skills. It's *not* a final yet and could be changed. But I can say for sure no Charisma will be.

You know, in general - the concept of ‘Charisma’, as for me, quite loose. If one of the person is considered charismatic for a couple of others, then it's not a fact that he will be charismatic for everyone else. With these thoughts, I decided to add such a thing as - the archetype. And now a little bit more details – how this parameter will change a role-playing component of the game.

At the moment I’m planning to introduce seven archetypes:


On these archetypes will be based mechanics of how other NPC will relate to the player. For example, playing as an Anarchist type, the player will feel strong pressure from local 'cops' (I mean local representative of the law). But at the same time, the player will be easier to communicate with the underground. This will bring the variability of the getting the quests and completing them.

Small demo: different archetypes can get the same quest 'Find a murderer of Lora' in the city Dark Water's Peak but its gonna be in different ways

And here, I guess, comes the question: there are will be some quests that are available to this or that archetype? The answer is – not exactly, but there will be certain nuances: if the main character is Nomad but has high Repair skill, then the probability of getting the quest 'Repair of the air purifier' in Vetrograd is very high.
Quote

May 17th, 2018, 20:52
The new UI looks good, and the game looks like a better Underrail.
--
"Wise men speak because they have something to say; Fools because they have to say something." & "What is the secret to eternal happiness? To not argue with fools."
Quote

May 17th, 2018, 21:07
I really like the sound of your archetype system! Its great when a game world reacts to your character in an intelligent way.
Quote

May 18th, 2018, 01:33
I've been replaying Fallout the second for the….uhmmm…..well, I've played it a lot, and I get a similar vibe seeing this game, and that is a high compliment. Keep up the great work, I look forward to playing this!
Quote

Yet another share about the game mechanics. As you can see there two progress bar next to the player picture - red one and violet one. So the violet one is a IFS indicator. Whats this mean?

That's my from my WIKI:

Name: IFS stats which characterizes the ‘morale’ – player’s intoxication, fatigue and so on
Value: from 0 to 1 fractional. For example: 0.01, 0.15 and so on
Description: IFS Intoxication/Fatigue/Spirit

This stat grows up with multiple battles without rest, when receiving damage from heavy weapons (grenades, machine gun, etc.) and also from taking any painkillers that raise health during the combat (intoxication). Its growth is affected by almost everything that does not calls as 'peaceful' actions. The higher value then chances of getting a critical action is higher (fall, or drop weapons, shoot yourself in the leg). Also, the probability of a miss will increase.


Can be removed only by going to the Doctor or by using stats 'Medicine', sleep-rest, gambling, relaxing with girls (or boys as you wish) or by using medbot camera.


And WIP - one of the details of buildings. Those heads will be on corners of some buildings . I think it's gonna be more interesting. So I'm planning a lot of statues. Small update! New props! No 'living' monitors yet. But it will be. Right now I'm working on it cause I'm trying to create more living world. 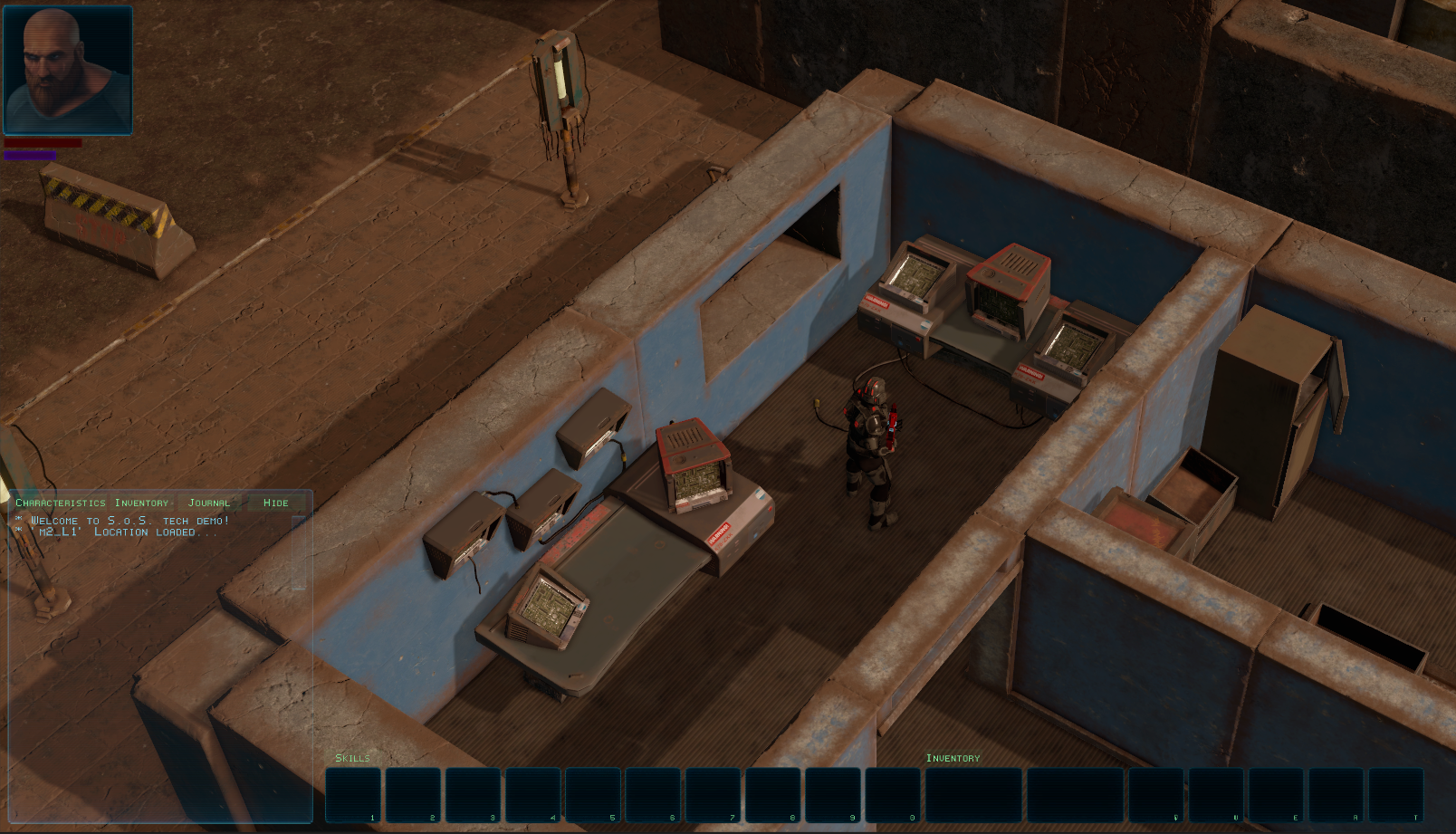 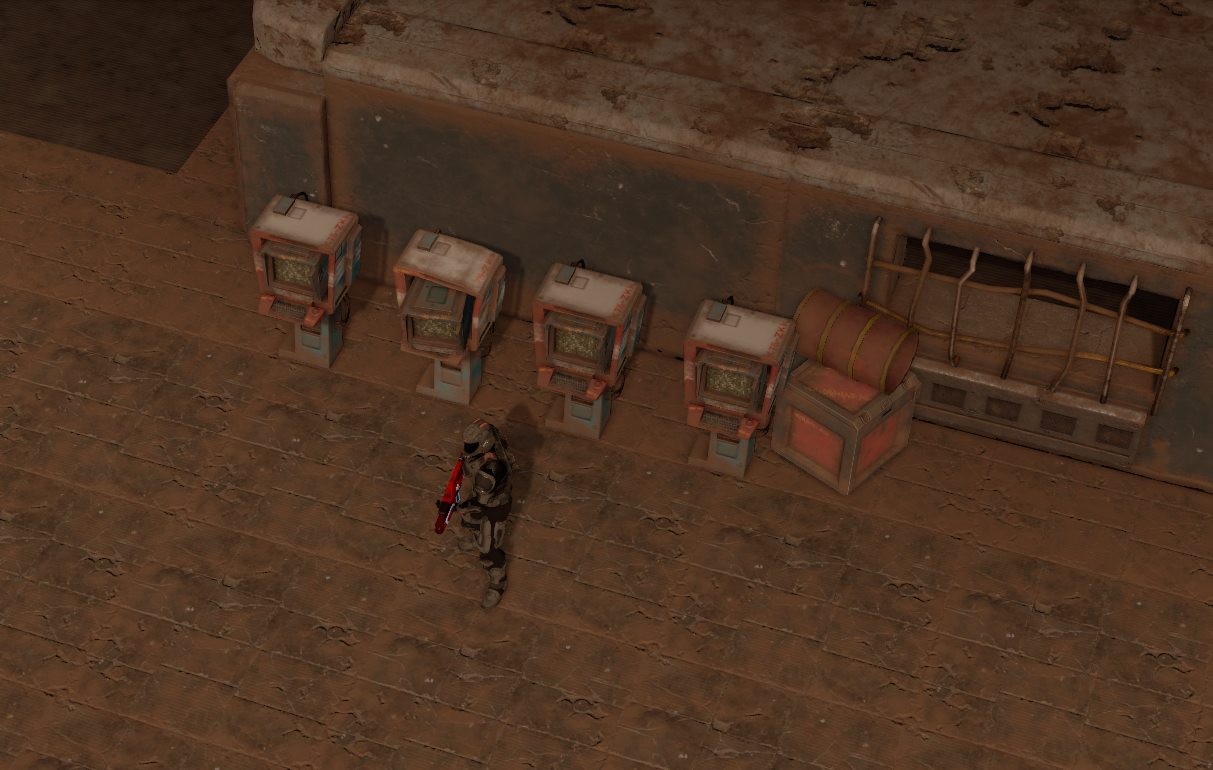 Thanks for your support!

Still working on props and locations and I want to share with you some basic game mechanics.

There are seven of them so far. Below, short description each of them:

1. Strength - influence on weapons, lockpick (you can use the strength on all locks), hand-to-hand combat and throwing weapons
2. Constitution - effects on the health points, the number of implants and its work, and a little bit on PSI abilities
3. Intellect - impact on the conversation, the overall impact on the characteristics, getting the level
4. Fortune - in some way the impact on all (you know what actually fortune means)
5 .Intuition - influence on the view range, the range of fire, and the combat queue, speech skills
6. Dexterity – action points in combat, armor, skills to sneak/steal
7. Will – PSI abilities

All these basic characteristics affect on one or another skills group. In general, everything is standard here.

As you can see from the screenshot, I’m planning three types of PSI skills:

Bio psychokinesis acts only on organic (bleeding from the eyes, intimidating, diarrhea etc.).
The cyber psychokinesis acts only on non-organic (for example - you can hack a robot (or some machine) during the combat and it will stand on your side for several turns)
Telepathy it’s not combat skills, it’s player’s abilities - for example, to uncover the fog of war in a closed room for a few seconds.
Only the Androids and Cyborgs will be apart, because it is both organic and mechanic, so some PSI from cyb and bio can be applied on them. But not all.
PSI are directly dependent on implants and Will characteristic. By default, all PSI are available for the player, but it can be used only if player has an implant - PSI booster.

The math of combat is quite simple. Almost all standard variables for RPG in general: 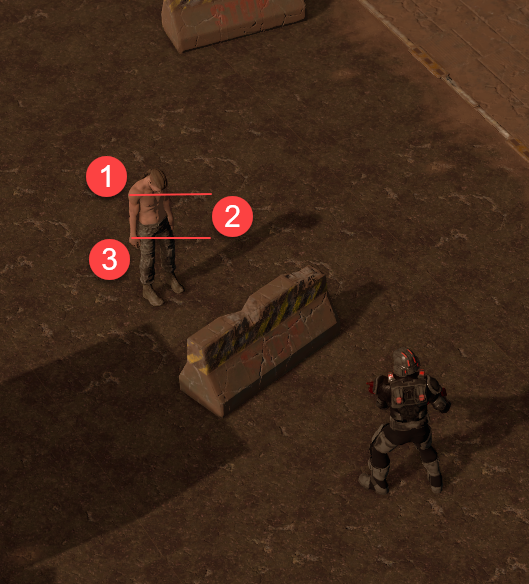 The last but not least - obstacles also calculated. The NPC has three points and player too - the head, torso and legs. If one of the points is not visible, then the chance of hit falls. And the last check is type of armor.
If the armor is a full kit (like Power Armor), then it is considered like minimum open areas. And if there are different parts of the armor, that more open areas are.

In generally I’m planning that the locations will be static. Randomization will be only when the player will found/buy/steal the coordinates of the unopened bunker or place. In this way the location will be generated randomly. This, I guess will bring some kind of dynamics to the game. And the loot and the size of the bunkers will depend on Fortune obviously. All other locations will be static.

It’s going to be an open world, so the player can travel the entire planet as he wishes.

And some NPC avatars: 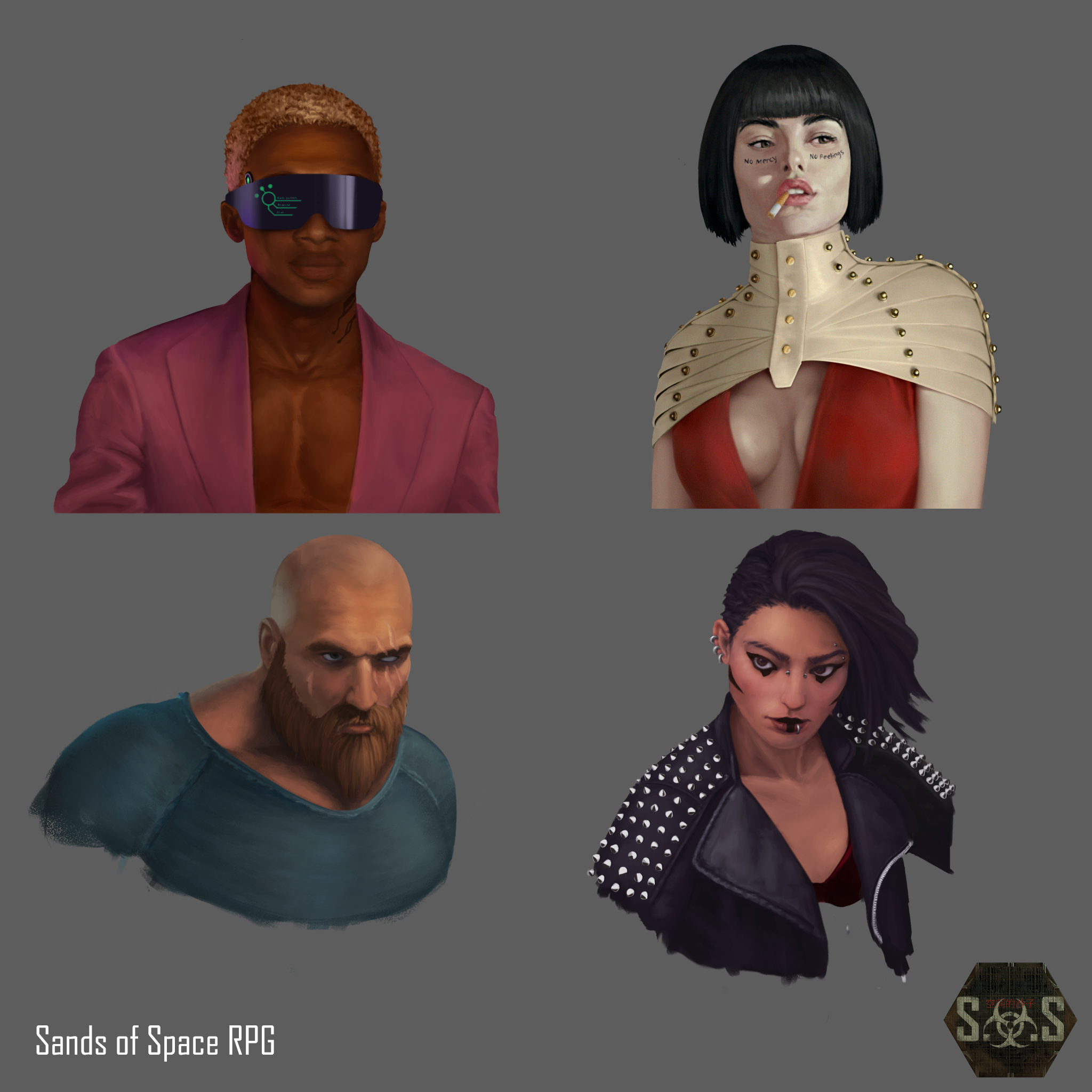 June 3rd, 2018, 22:45
Looking good if you need help with your game you can always try asking here. As a few members are experienced modders, and helped a few larger RPGs games at one point.
--
"Wise men speak because they have something to say; Fools because they have to say something." & "What is the secret to eternal happiness? To not argue with fools."
Quote

Looking good if you need help with your game you can always try asking here. As a few members are experienced modders, and helped a few larger RPGs games at one point.

This site has a good reputation among RPG's fans so it's not surprising that so experienced modders are here. And thats really cool! But right now I'm really want to release some small part of the game aka playable teaser for free of course.

I have a thoughts about to release also modders software and maybe someone will be interested in it.
--
Sands of Space Old School scifi RPG with turn based combat
Quote

WIP, small props. Haven't finished all of them but you can check how it looks. 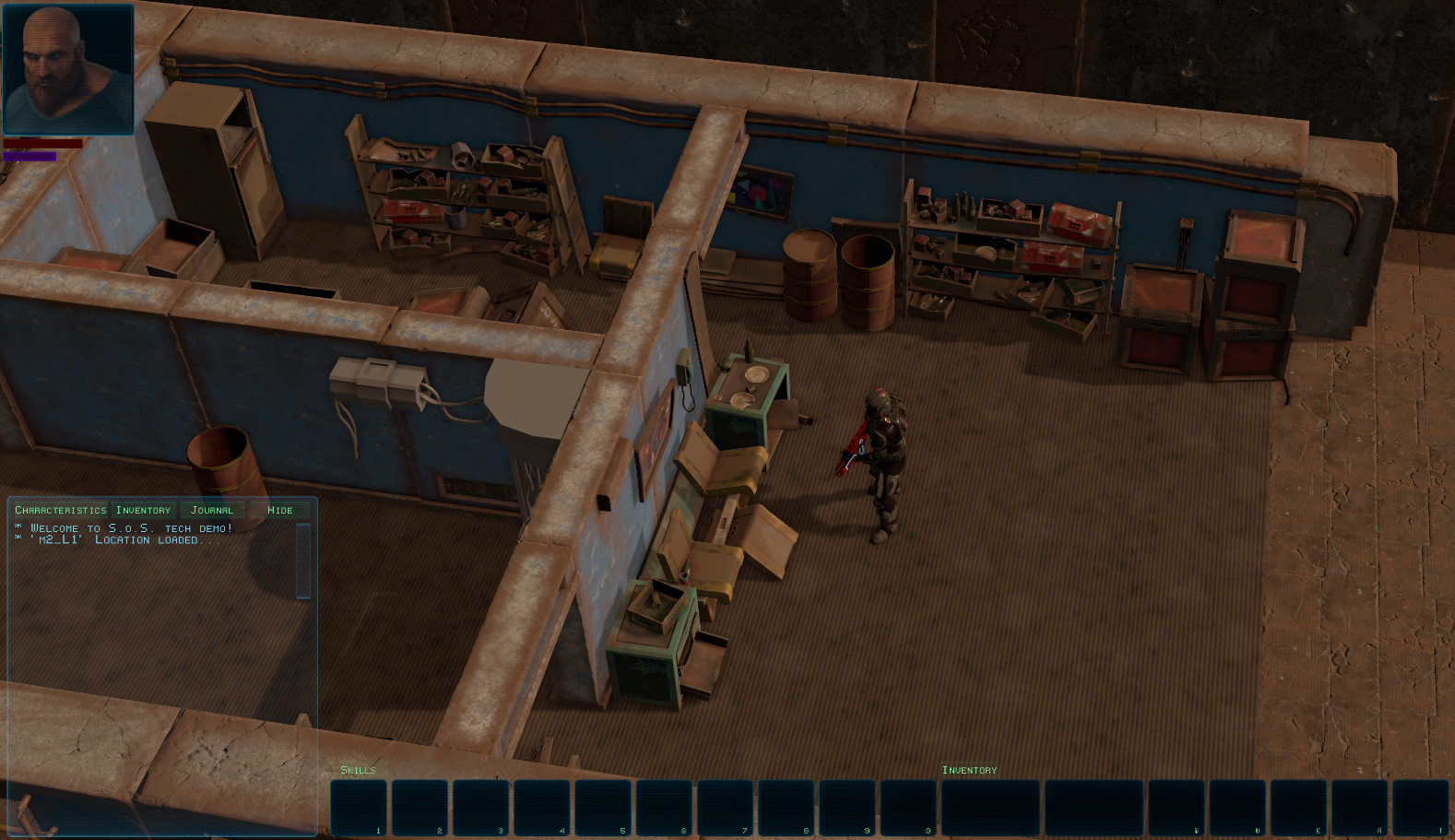 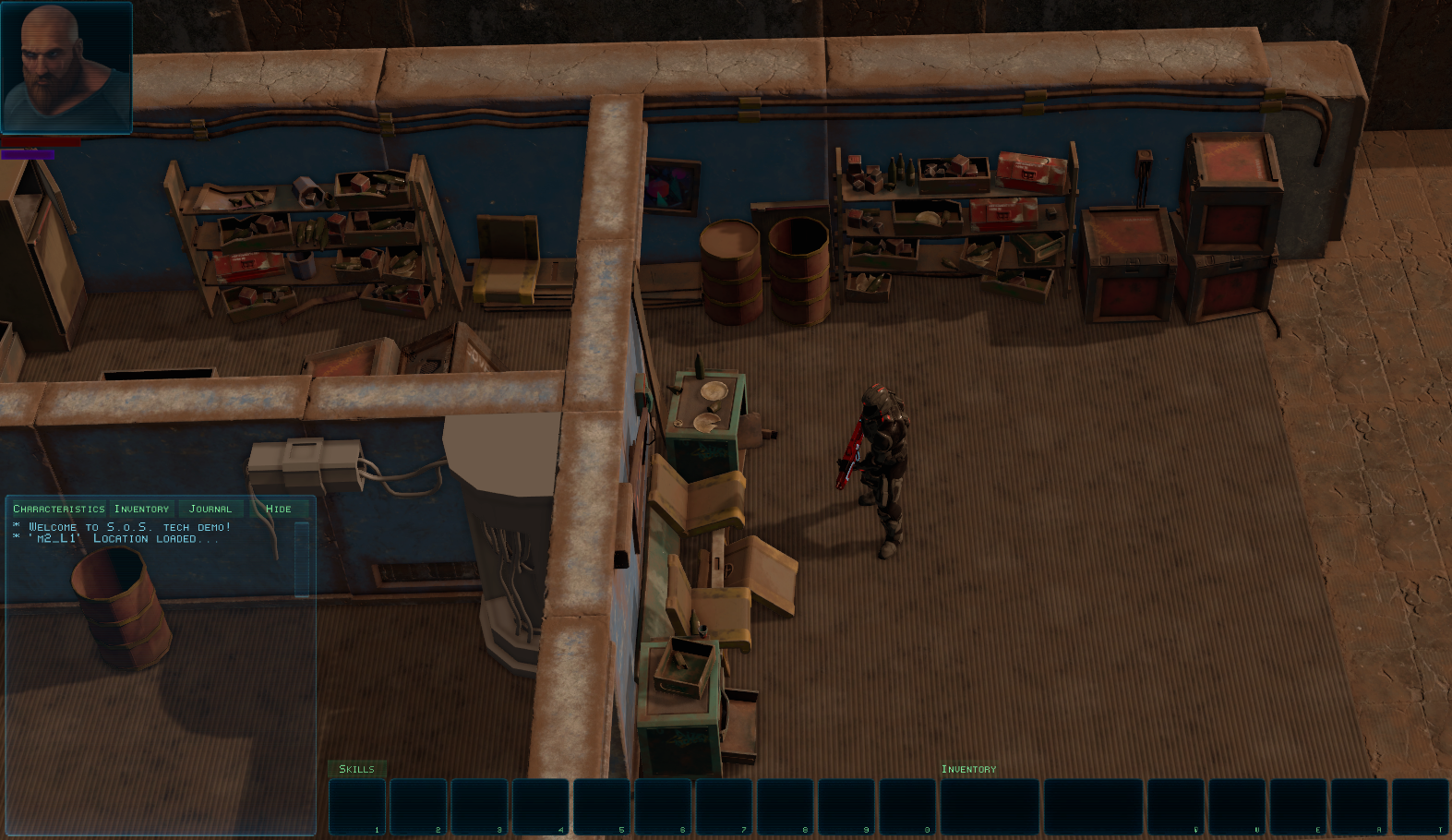 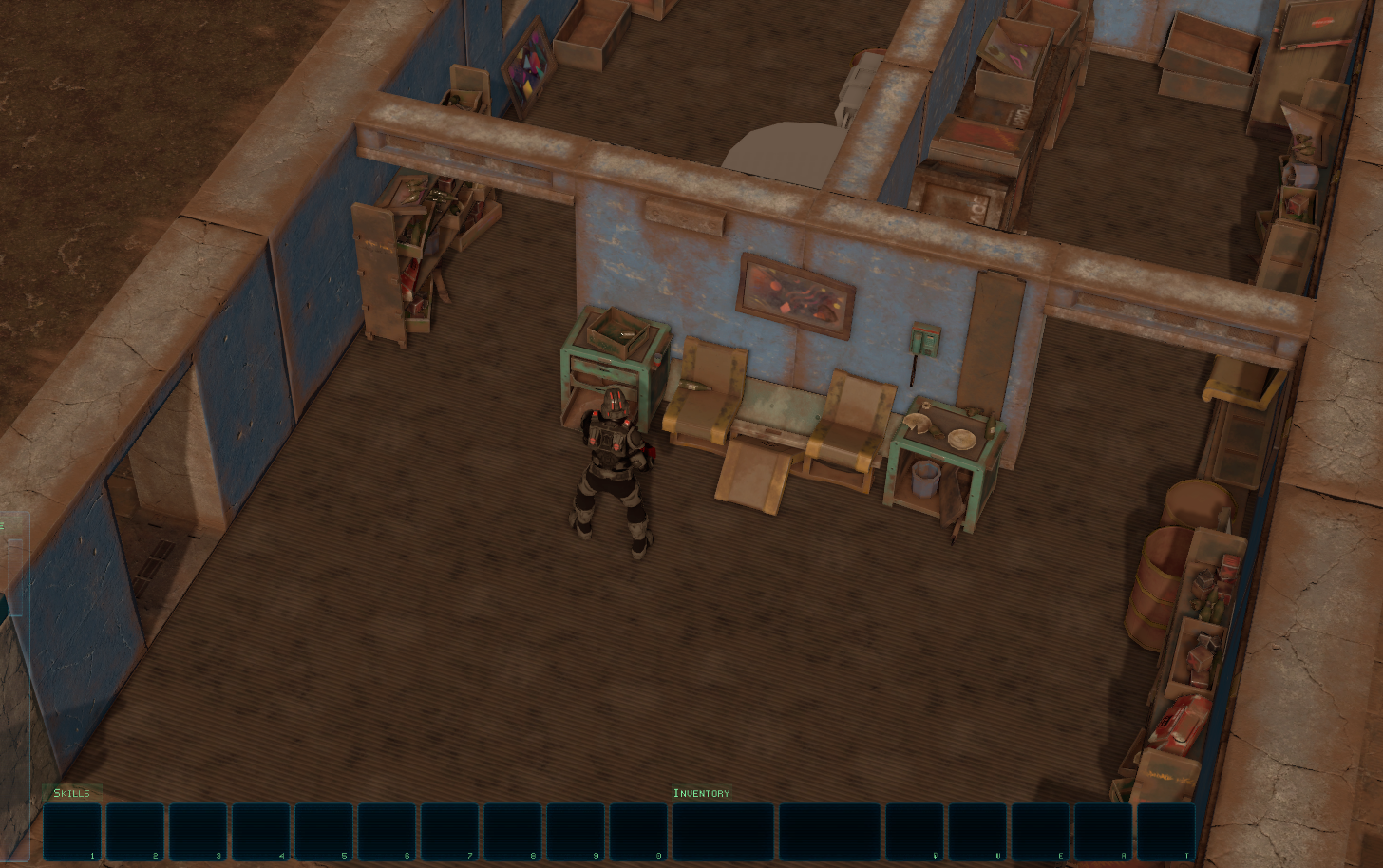 Now I'm working on a vehicle fleet. And this is, I would say, not so easy as I thought.

So, 'Interceptor' model is finished for now! Here, the variations of this model that you can see in the game.

Lil history of this model: Interceptor originally planned as a low-cost car for local security agencies. Fast, with low maintenance and easy to repair. Later, this model was modified for different needs - like taxi. Also this type of car was mafia bosses favorite.

Small fact: all vehicles in S.o.S. are dangerous. Not only vehicles, also all equipment and mechanisms. If you go next to a car then there is a probability that the alarm system will turn on. Then the enemies will notice you. The alarm function on the cars is randomly, so it will be useless to remember. You should think carefully to think through your way if you don't want to be noticed. 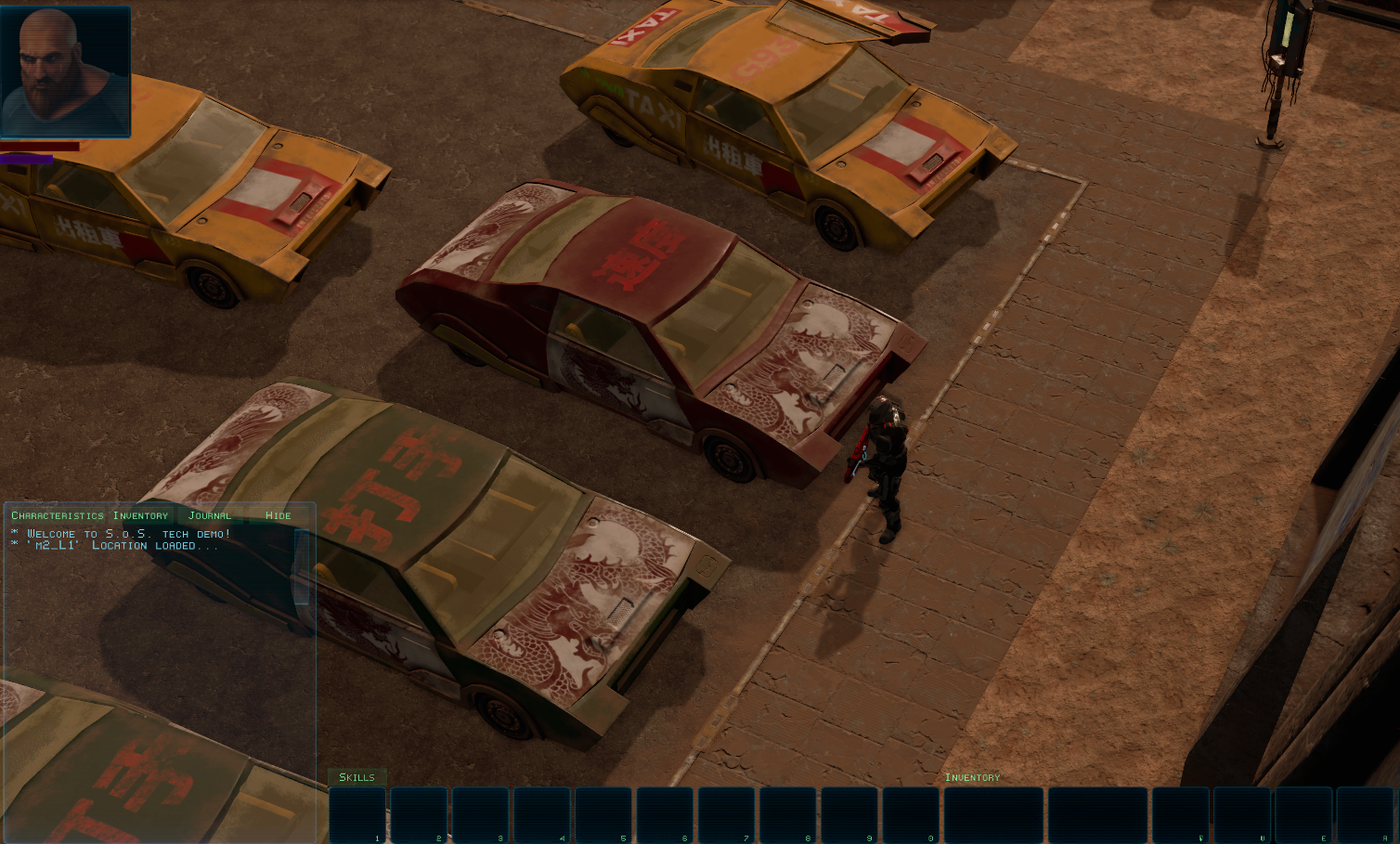 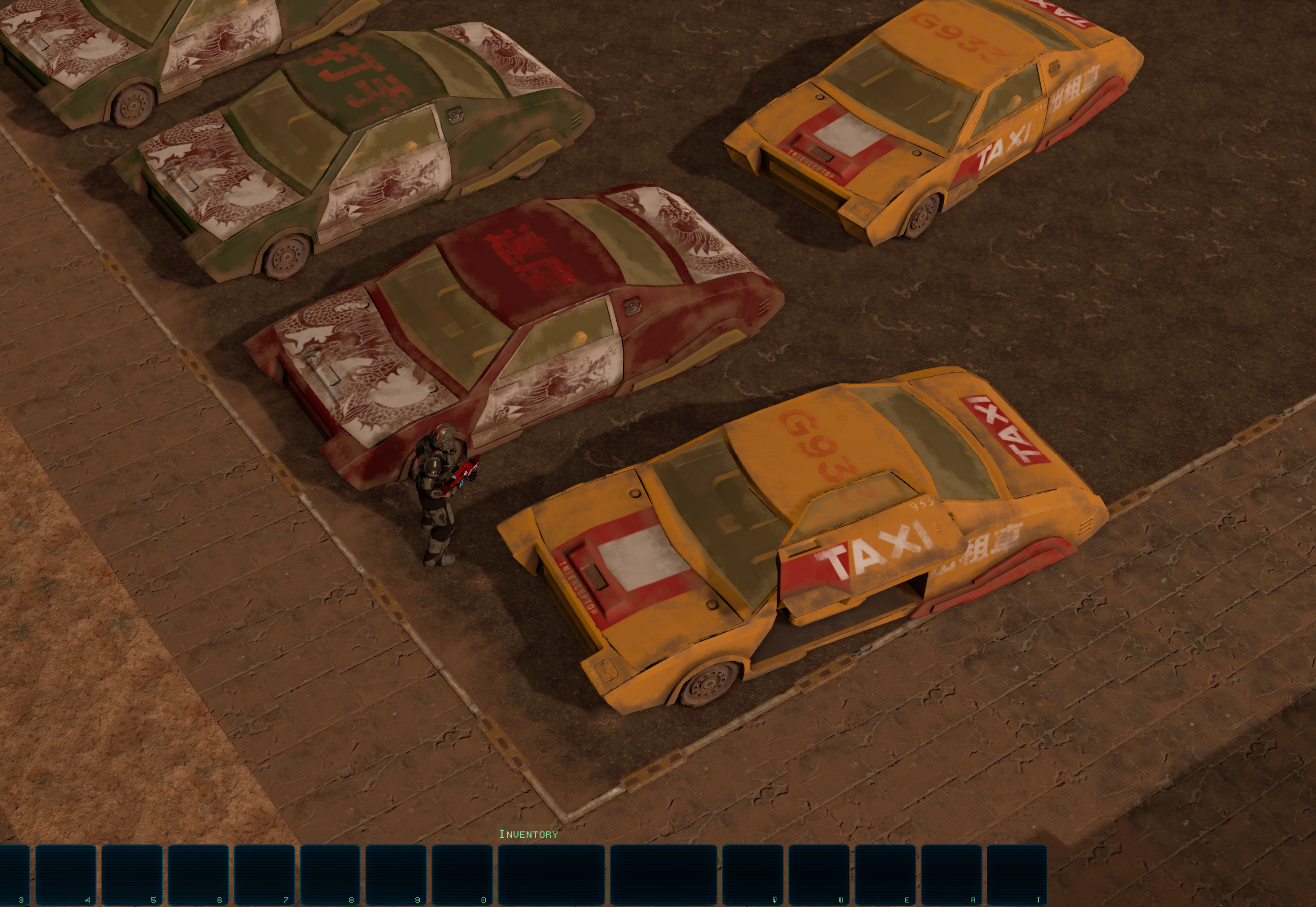 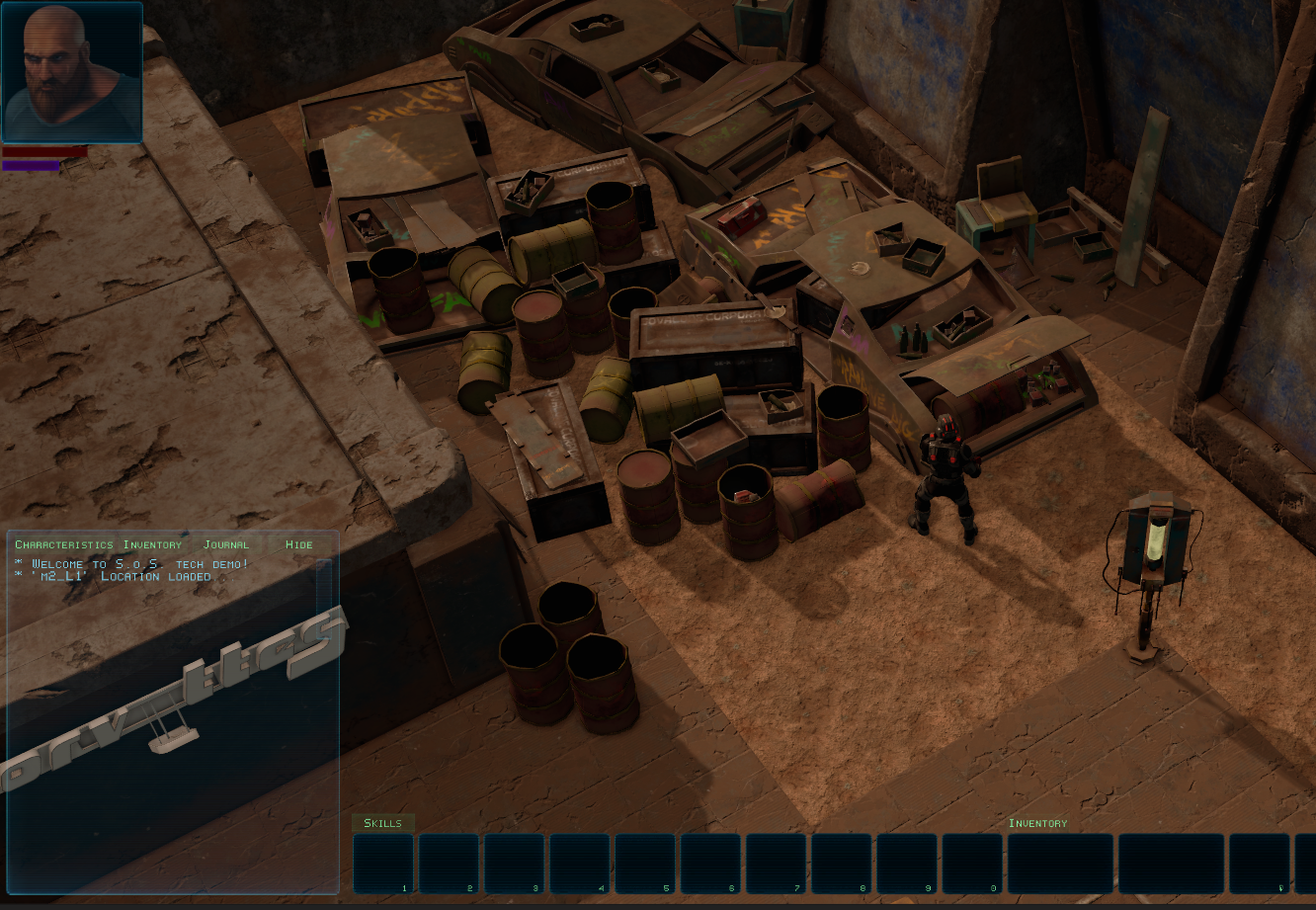 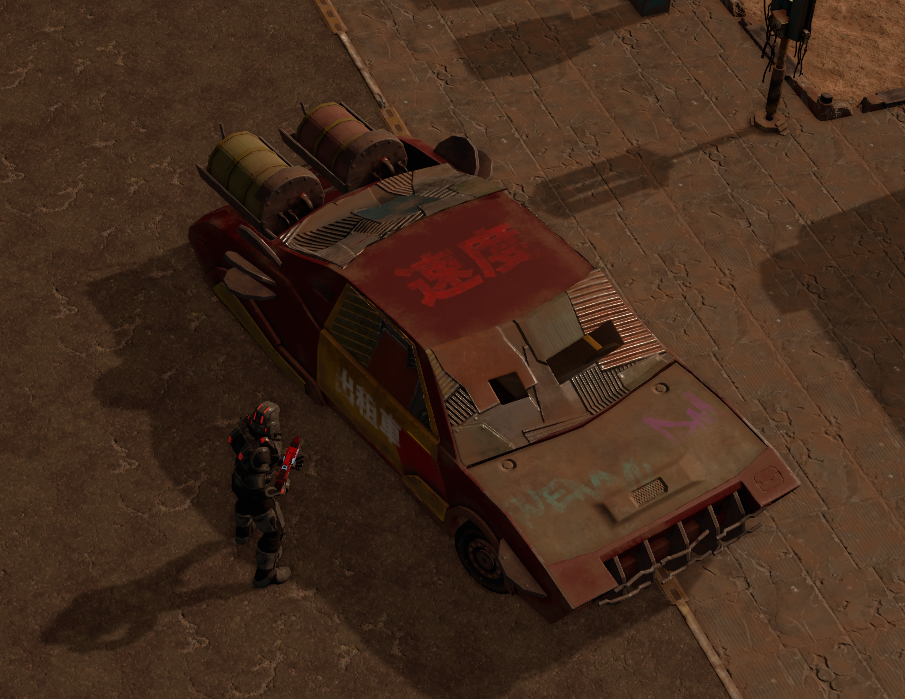 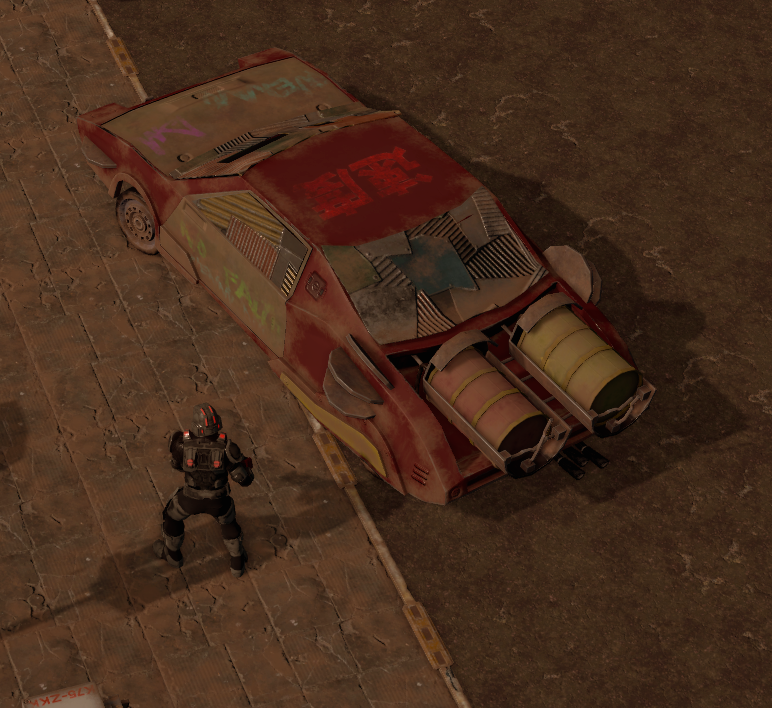 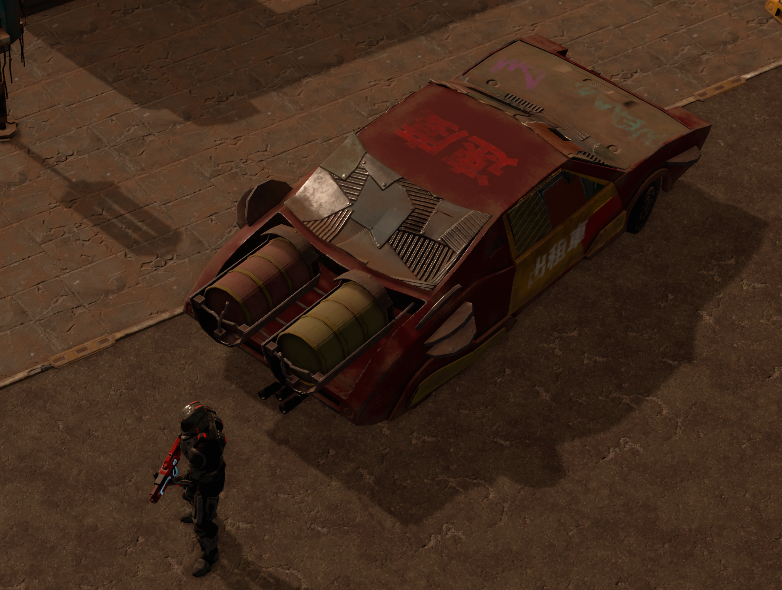 Some part of the icons have done! Stealth, repair, science etc. Also I reworked some textures and finished scifi tank model. And a lot of new models are not on the picture 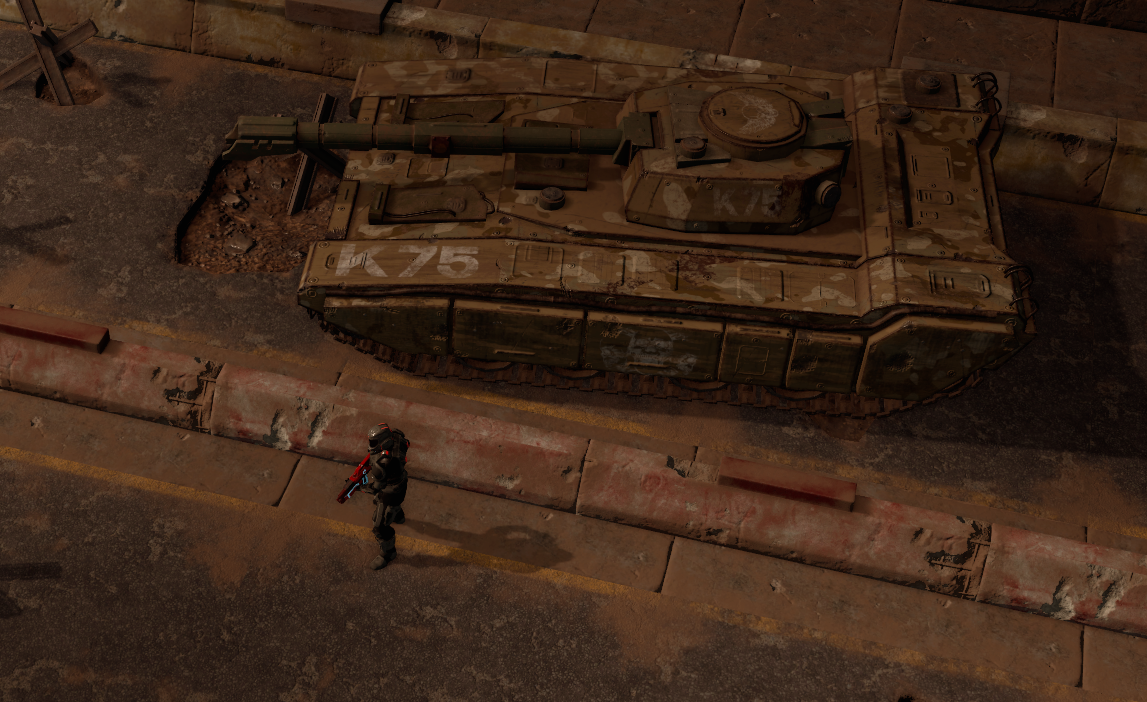 Good news. Common icons are finished like a stealth, burst, science etc. Also some psi abilities got icons too. But locations still in progress 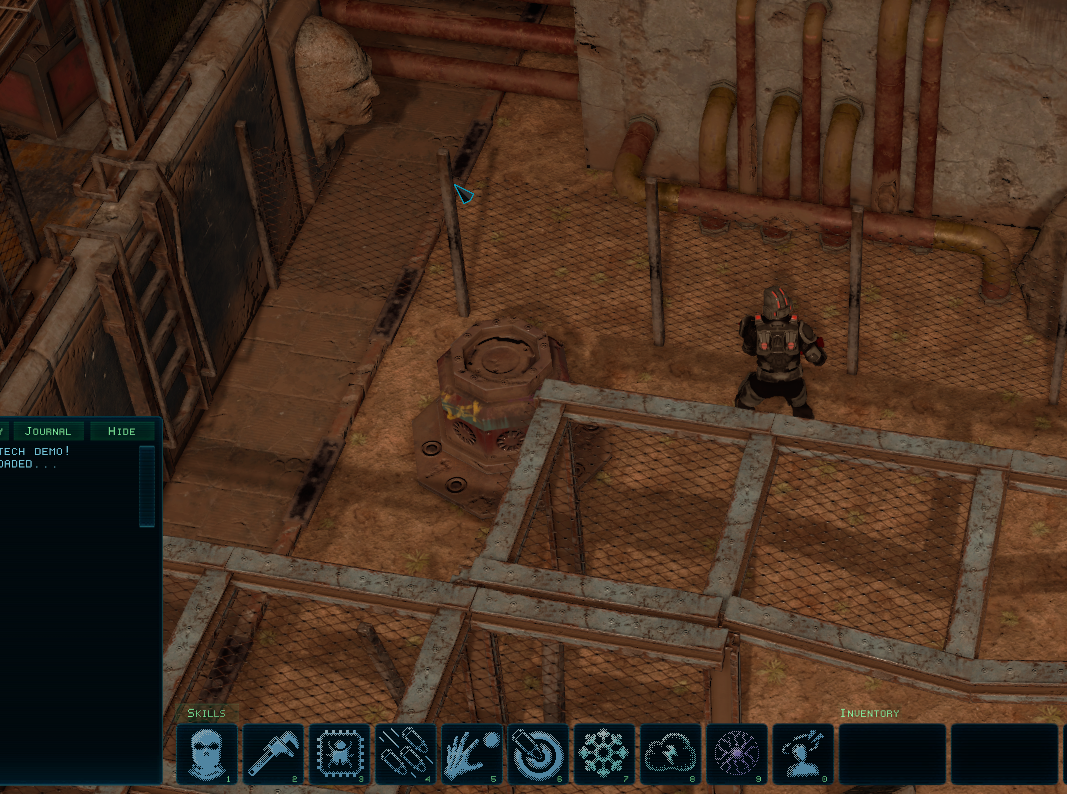 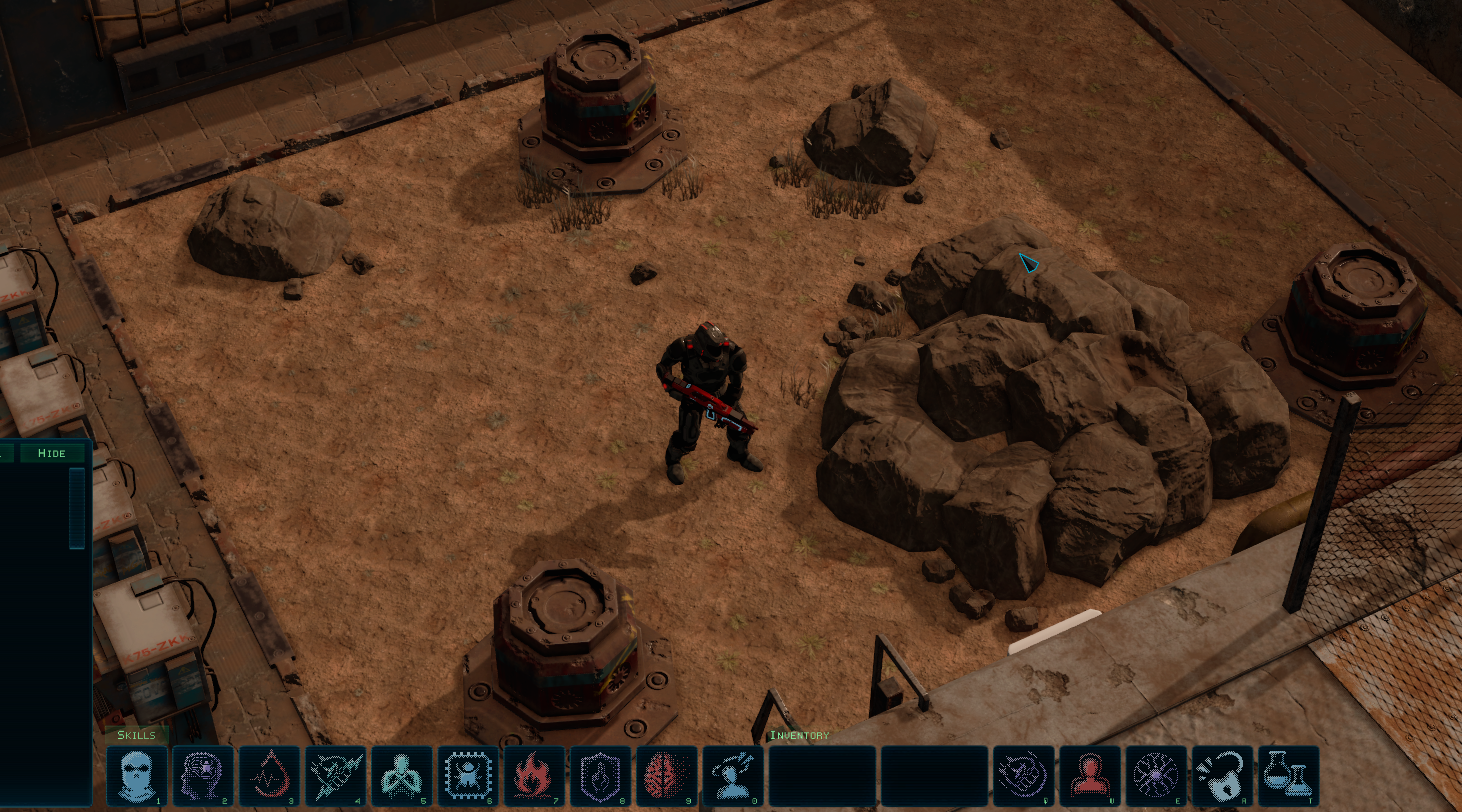 In a game full of the text the main bottleneck is a font. The font should be readable and not complicate the player's life. But choosing a font is very difficult process, as is its color. Plus, here goes the screen resolution and everything is getting worse.

I was planning to order a font. Make it like the old pixel (no, there is no thing like this I guess, but they are very similar to pixels) IBM PC fonts. But, unfortunately, the designer couldn't get the job cause he is very busy. So, I decided to look for a free font that would pass under three main requirements:

1. Absolutely free, up to commercial use.
2. Cyrillic support and at least a couple of languages - French and German (maybe someone will translate it if I find money for this)
3. And my favorite test a set of symbols - "Illegal1 = O0" (zero, letter O, numeral one, and English l and cursive letter l (L)

And I found it. This is the Iosevka font. It's totally free and almost passes the point #3

I will not stop looking for the font of my dreams, but so far, the choice has been made. I hope you like the font. And even if not, it will cause less irritation than Comic Sans.

One more thing. The font size on the screenshots is the minimum that can be set in the game, further - you can only make it larger. The font size changing option will be for sure. 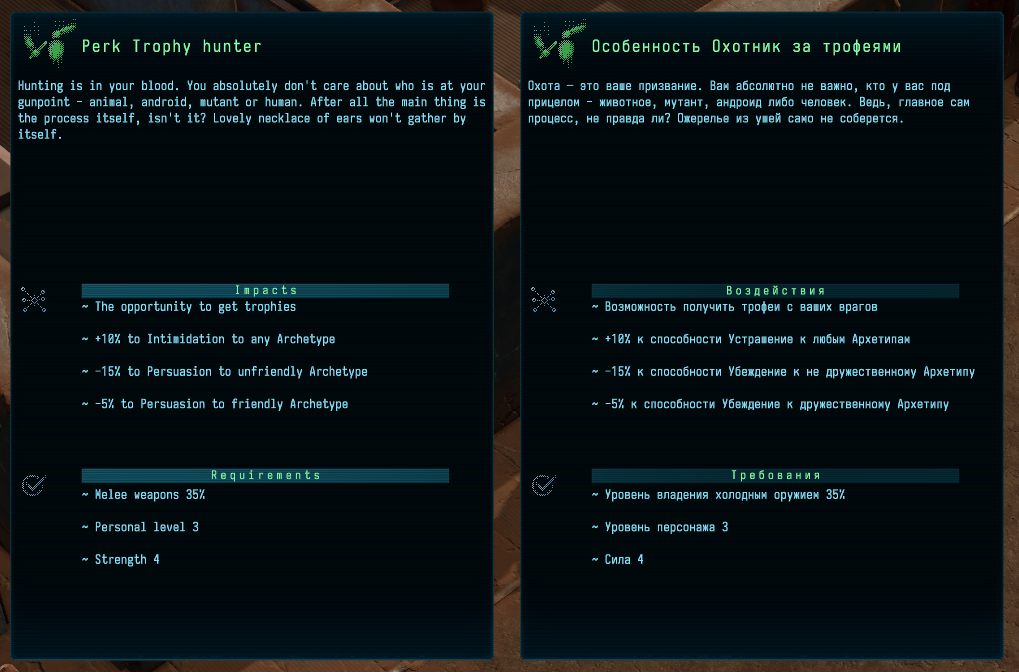 And I'm still in progress of creating models for the environment. 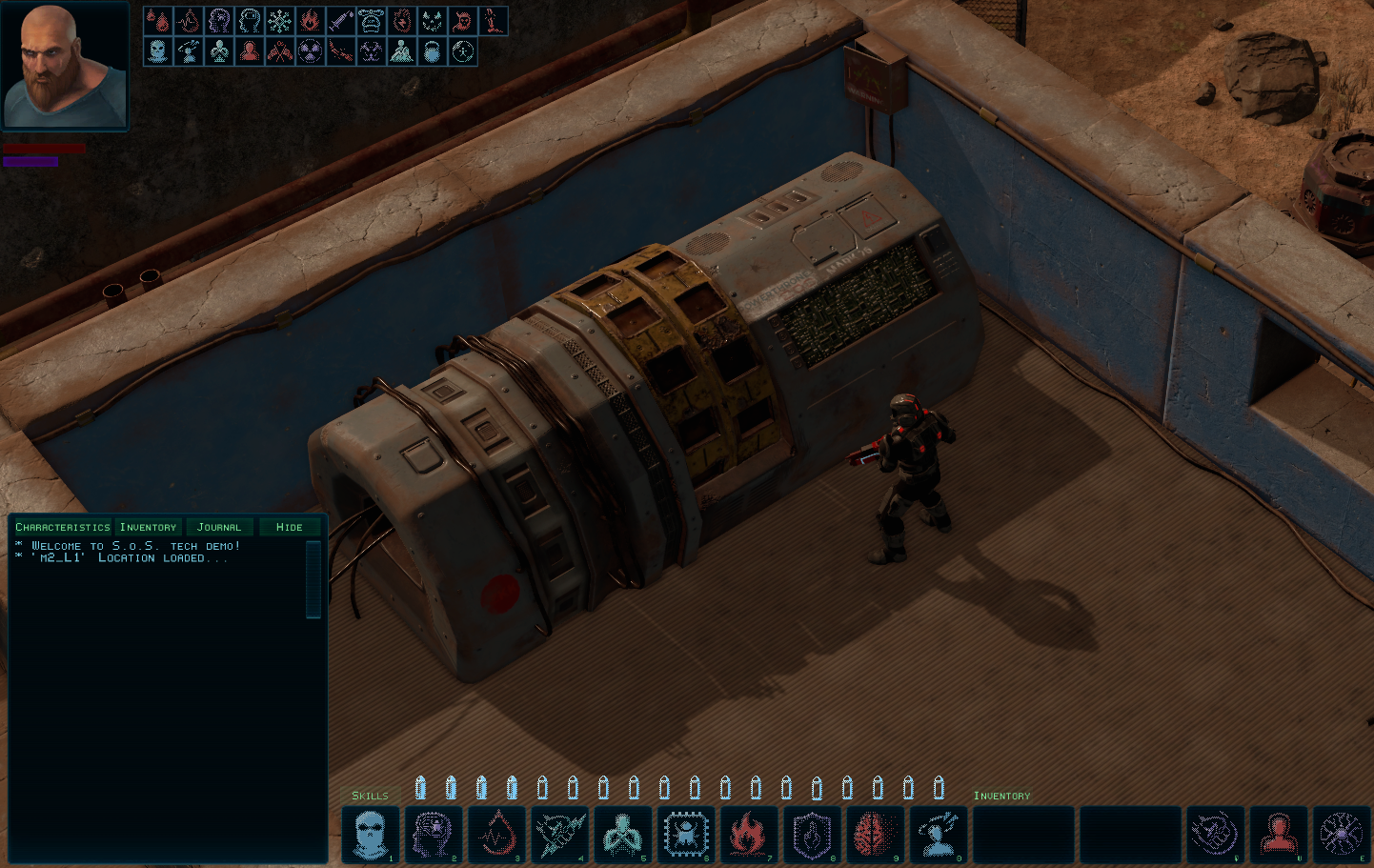 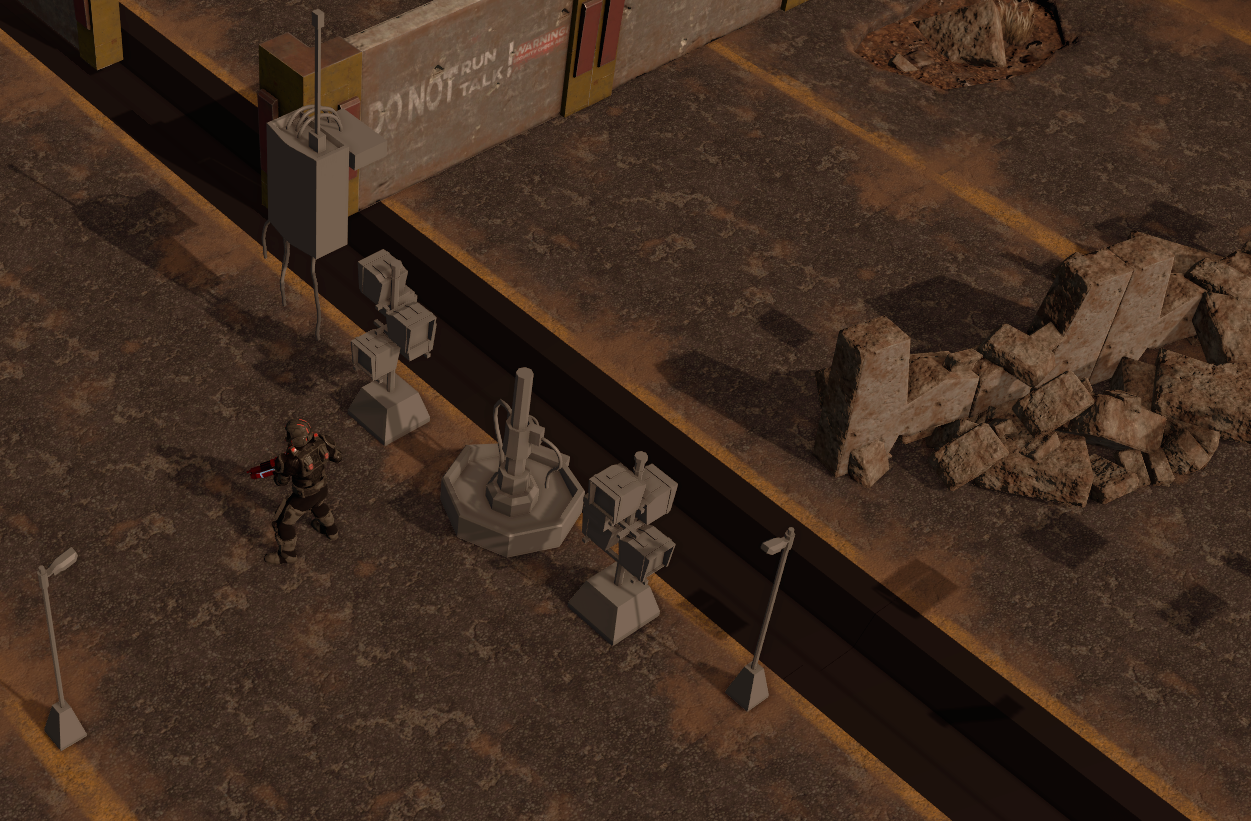