Imagine if I told you that there was a game out there that blended the lush visuals of Nintendo's genre-defining The Legend of Zelda: Breath of the Wild, with the intensity of an action-driven RPG. Picture a world that is teeming with life, characters, and all manner of challenges. Now imagine if I told you that not only did such a game exist, but it was free to play.

At this point, I'd be wiping the coffee off my face that you'd just excommunicated at high velocity from your mouth, because you wouldn't believe me. At this point, you'd ask me what the catch is, no doubt thinking of some grievously awful microtransactions and freemium barriers. Here's the real kicker though: Not only is Genshin Impact a damn good game that's well worth sinking a multiple hours inside of, its premium elements hardly feel intrusive.

Genshin Impact may be one of the biggest surprises of the year: A free-to-play RPG that gives players an absurd amount of freedom and content to dip into. Some barriers can still be found in the absurdly rare drop rates for premium characters and the world shows some growing pains, but you're still receiving a gorgeous fantasy world that doesn't press-gang you into spending money on it.

Gacha games are video games that implement the gacha mechanic. This is somewhat similar to loot boxes, inducing players to spend in-game currency to receive a random virtual item. Most of these games are free-to-play mobile games, where the gacha serves as an incentive to spend real-world money.

--
"My news thread updated weekly for anyone interested in more news." - Couchpotato
Quote

I've played the game for 80 hours now.
My adventure rank is 31
My main character: lvl 60
I've reached the (current) end of the main storyline.

I've paid nothing for it and had a wonderful time.
Quote

MC is level I have no idea I don't use MC in fights only in certain MCexclusive puzzles. Anyway, whichever level MC is, will stay that way. No more wasting time nor ress on MC.

Depending on puzzles though sometimes I switch in MC, Amber or Lisa who are all some low levels Maybe level 40. Not more than that.

As I got Venti pretty much after I've explored everything, I'm currently working on him (or her?) as a second DPS in Abyss.
Barbara+Kaeya can solo their chambers easy peasy, but Xian+Noelle are seriously lacking some cc.

I paid nothing too.
I have some more characters than those I just mentioned, but I can't care less about them and they're all doing expeditions. For example Fischl - I got her *after* I got Venti. Well Too late. Not enough $ nor XP items to pump her up. Currently

Because I can't remember, I can post a pic: 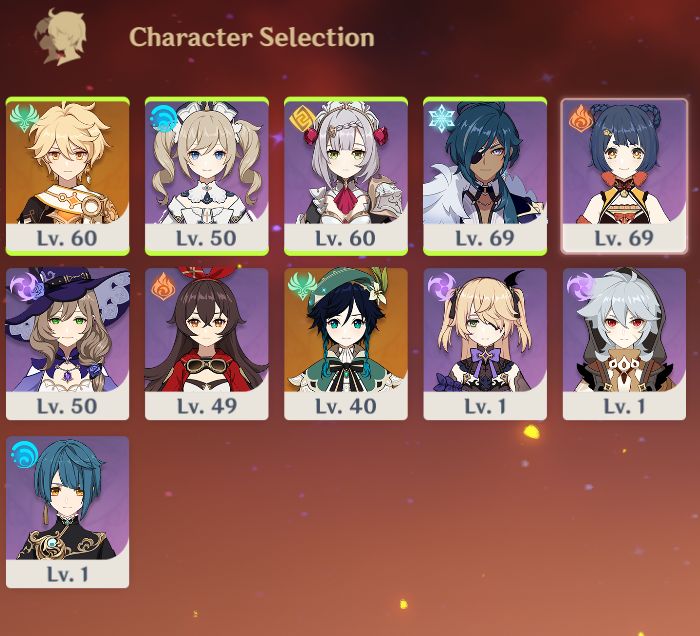 As I understand you get some side-quest 'til adventure level 36.
But the main story ends at adventure rank 29 at this moment.
Quote

My main party is Me (Lobo), Amber, Kaeja and Diluc.

As I understand you get some side-quest 'til adventure level 36.
But the main story ends at adventure rank 29 at this moment.

Those are not sidequest but story quest.
You can always see solved story quests of which one can be unlocked on adv lv 32, another on 34 and the last one on 36.
You can't see solved side-quest anywhere.

A suggestion: Amber is an utterly useless character. I wish I had someone better earlygame so I don't spend too much of time and ress on her. Kick her out - you already have a firebased character in the main party (Diluc).
Keep in mind however that she is needed for some special puzzles (Qingce Village 5 platforms puzzle with barrels, start with amber and shoot the lowest barrel, fly up with Noelle then destroy top two while E is active and then shoot 2nd and 3rd again with Amber from above).
Once you've dealt with all puzzles on the map, feel free to send Amber on expeditions as she's worthless in dungeons and in coop boss fights.

If someone has just started the game, remember. Amber is okay earlygame but as soon as you get another fire based character, stop leveling her.
Sadly, I was so unlucky I had to wait for Xiangling for too many hours.

Wow, Joxer hooked on a Chinese MMO, never thought that would happen

Wouldn't say hooked The fact is that one of my RL friends is playing it too so there. He just texted me to help him later with a certain boss (Oceanid, trivial with Kaeya and any electricity based character).

Also it's not the first chinese game I've played so that's not odd either.
--
Toka Koka
Quote