August 27th, 2020, 08:55
Still remember watching his first big movie Home Alone as a kid myself after all these years as well. Hard to believe he's a year older then I am. To bad his career fizzled out.

Pro-tip don't let your family manage you and take all of your money.
--
Opinions are like assholes, everybody's got one and everyone thinks everyone else's stinks.
Last edited by Couchpotato; August 27th, 2020 at 09:29.
Quote

Why do birds sing?

Because they're all on drugs.

As are koalas, stoned all the time! (At least in urban mythology.)
Quote

Why do birds sing?

Because they're all on drugs.

So much bird hate!

What I mean with "it is intuitive" is, that even with a Dyscalculia, the built-in maths skills are sufficient to let the body work through such a problem, and present that to the surface of the conscious human being as "Emotions".
Symmetry is instantly felt. Symmetry just "feels good". And at this level, Geometry is imho understandable through Emotions.
I think that "Emotions" then are the tool of the built-in mostly unconscious maths skils everyone has to present the result of the "calculation" on the built-in math skills to the conscious being we call "humans" at the surface.
--
"Any intelligent fool can make things bigger, more complex, and more violent. It takes a touch of genius and a lot of courage to move in the opposite direction." (E.F.Schumacher, Economist, Source)
Quote

Non-repayable government grants will help fund a range of projects, from prototypes to 40m+ AAA games

If I lived in Germany, I'd quit my stupid job and go videogames developer.
--
Toka Koka
Quote

September 27th, 2020, 13:23
I just found this via another thread about Canadian culture :
http://mcpei.ca/resources/library/ac…s-and-legends/
These are stories coming from Mi'kmaq culture, as far as I understood this page.
--
"Any intelligent fool can make things bigger, more complex, and more violent. It takes a touch of genius and a lot of courage to move in the opposite direction." (E.F.Schumacher, Economist, Source)
Quote

September 28th, 2020, 18:21
I stumbled across this idea from a chap who came up with a solution for a webcam with more natural eye contact. It can be done with a cardboard box and a sheet of two-way mirror. He liked it so much, he went on to get a proper housing cut, and add a DSLR camera.

I think I might have a go, as I'm using more videochat in these weird times, and I don't like the way it's usually set up. If it works, I may be distributing little wooden boxes from my shed to friends and family.

For once I'm going to treat Australian issues rationally.

I once read this: Is the inland taipan dangerous? Yes - if you are a laboratory rat. AFAIK it's still recognized as the snake with the most potent venom, but according to the web there actually hasn't been any recorded deaths from inland taipan bites.

a pibbur who thinks deadly spiders are the worst. Because they're deadly, and yeeeechy.
--
Over the mountain watching the watcher
Quote

As are koalas, stoned all the time! (At least in urban mythology.)

Some more info on koalas (from qi):

October 4th, 2020, 11:36
The Isleworth Mona Lisa : https://en.wikipedia.org/wiki/Isleworth_Mona_Lisa
Who are its owners ? https://news.artnet.com/art-world/se…awsuit-1614043
--
"Any intelligent fool can make things bigger, more complex, and more violent. It takes a touch of genius and a lot of courage to move in the opposite direction." (E.F.Schumacher, Economist, Source)
Quote

Agatha Christie was an avid surfer and could surf on all kinds of boards in all kinds of styles as early as the early 1920s. She even surfed in far off places such as South Africa and Honolulu. In fact, it was her no.1 pursuit when holidaying. 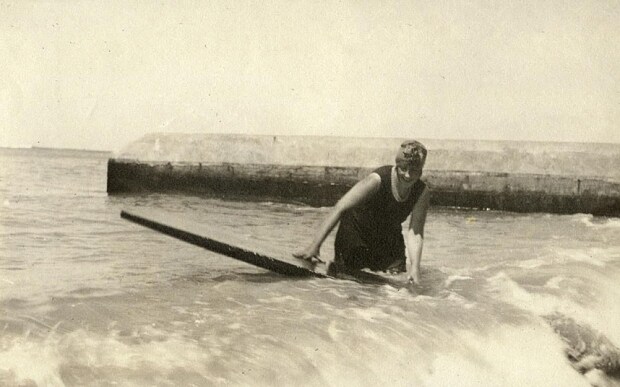 
It's the Texas Instrument's Cal-Tech pocket calculator, a prototype made in '67 for the later Canon Pocketronic thingy (released in 1971). It's regarded as the first electronic hand-held/pocket calculator. Only two of those '67 machines are known to exist today. One of them is at the Smithsonian. The other is now up for sale at Bonham's auction house (https://www.bonhams.com/auctions/260…ngth=96&page=1), expected to sell for 30K-50K USD.

a pibbur who might want to get it if 1) he collected calculators (which he doesn't) and 2) had the money (which he hasn't) and 3) got the wife to agree on the investment (which she won't).

PS. Back in '74 when I started med school, pocket calculators were still fairly expensive. So I used a slide rule for my chemistry calculations. I still have it. Somewhere. DS.
--
Over the mountain watching the watcher
Last edited by pibbuR; October 28th, 2020 at 18:07.
Quote

October 29th, 2020, 00:55
I still have a slide rule as well which I also used with high school chemistry calculations. I thought they were incredible tools back in the day!!

I still have a slide rule as well which I also used with high school chemistry calculations. I thought they were incredible tools back in the day!!

a pibbur whose only misgivings about said devices are limited support for symbolic calculus.
--
Over the mountain watching the watcher
Quote

Had some problems with this one, it seemed to be a week late. Then I discovered that the US end-of-daylight-saving-time on the 1 of November indeed is a week late.

a pibbur who doesn't rely on mnemonic aid tricks to remember the direction of adjustments. But who admits that occasionally it takes a day or two before he notices he forgot something.
--
Over the mountain watching the watcher
Quote

Imagine being a dairy farmer who has to train his cows to change their milking time twice a year!!!!

Daylight Saving Time (or Summer Time," as it's known in many parts of the world) was created to make better use of the long sunlight hours of the summer. By springing" clocks forward an hour in March, we move an hour of daylight from the morning to the evening. On the first Sunday in November, we fall back" and rewind our clocks to return to Standard Time.