@Ripper quote him next time, to catch him red-handed

Yesterday, 17:38
I don't quite know what's wrong with me, but I've been a little sad at the thought of never having a new Windows version again.

So, this W11 news was a positive for me - just through the name alone.

I guess I'm not that smart

Well, except that I was right in absolutely not understanding why they'd stop taking money from people by incrementing numbers on a box.

As for this version, I don't know. I don't remember the last time Microsoft impressed me with their OS upgrade. Maybe Windows 2000/XP - that seemed a proper upgrade.

Of course, coming from the AmigaOS - it wasn't until Windows 95 (with actual multitasking) that I started to appreciate Windows - and it wasn't until 2000/XP that I considered it a comparable OS.

Obviously, having invested a minor fortune in the right hardware (including the right SSD, GPU and so forth) - I'm happy to hear that I might one day get to experience load times resembling the actual capacity of my gear.

But, from what I've seen, W11 won't be anything to write home about.

I'll use it as an excuse to re-install from the ground up, I guess. I used to do that every 3-6 months.

I don't bother with that at all, anymore.
Quote

Quote him next time, to catch him red-handed

Lol, yeah - I try to remember to do that, but I keep forgetting.

Go ahead I rarely do what you say I do anyway.

Most of my post edits are because of grammar errors as I type fast. As a mod you have the tools to see what I changed or deleted. I'm guilty in the political forum though.

As sometimes the reply is not worth it.

Yesterday, 22:45
Not a big deal. Just not the first time you've left me with people wondering what the hell I'm responding to.

Today, 00:20
The requirement for new hardware to run windows-11 seems heavy handed. While enterprise frequently update the hardware every three years home user might keep the same hardware or at least the motherboard/cpu for 8+ years. From a performance perspective a 10 year old i7 is more than fast enough for most games. This suggest that microsoft has little interest in meeting the needs of the home user with windows 11 and it is largely aimed at enterprise. This would beg the question what the future plans are with support for games and if there might be greater divergent between the console and pc support for such esp if microsoft wish to encourage user to use the console. I realize that these comments are largely speculative in nature but it does seem the focus of the new development.
Quote

Today, 02:03
Starting to get targeted with communications for this, its annoying. I usually updated early as I used to do light software tech/IT at work and so was always testing newest OS. No longer doing IT for work so meh.

Still I was curious on the support and this was on their FAQ:

What if my PC doesn’t meet the minimum hardware specifications? Can I stay on Windows 10?

Yes! Windows 10 continues to be a great version of Windows. We have committed to supporting Windows 10 through October 14, 2025.

They mentioned a TPM.MSC which I ran and said my PC didn't have TPM. The PC was pretty state of the line at the time so was surprised although I guess I shouldn't be.

EDUT: So Windows pulled their app but there is a nice one at GitHub which I ran. Does say I fail for win11 (and I have a really nice PC that even now runs fantastic) so that is frustrating.

On the other hand it might just be disabled on the BIOS although I don't know why … but then I am so not a hardware/computer-guts person so I avoid anything to do with the BIOS. 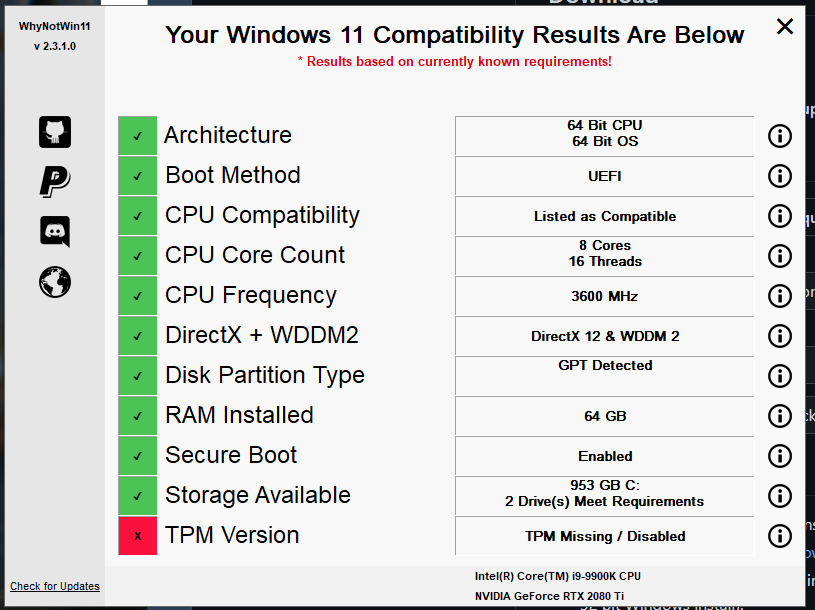 EDIT TWO: So I am just an idiot. I rebooted and went into the BIOS and I do have TPM 2.0. It is disabled and gave a warning about enabling it so left it off since everythng is working fine right now.

At least I know that is the problem - its disabled not missing. I was really surprised at the idea of it being missing.

Still I may end up with a new PC soon anyhow as I have been looking around for something with one of the newer Nvidia cards.
--
Character is centrality, the impossibility of being displaced or overset. - Ralph Waldo Emerson
Last edited by wolfgrimdark; Today at 02:19.
Quote