This image really says it all: 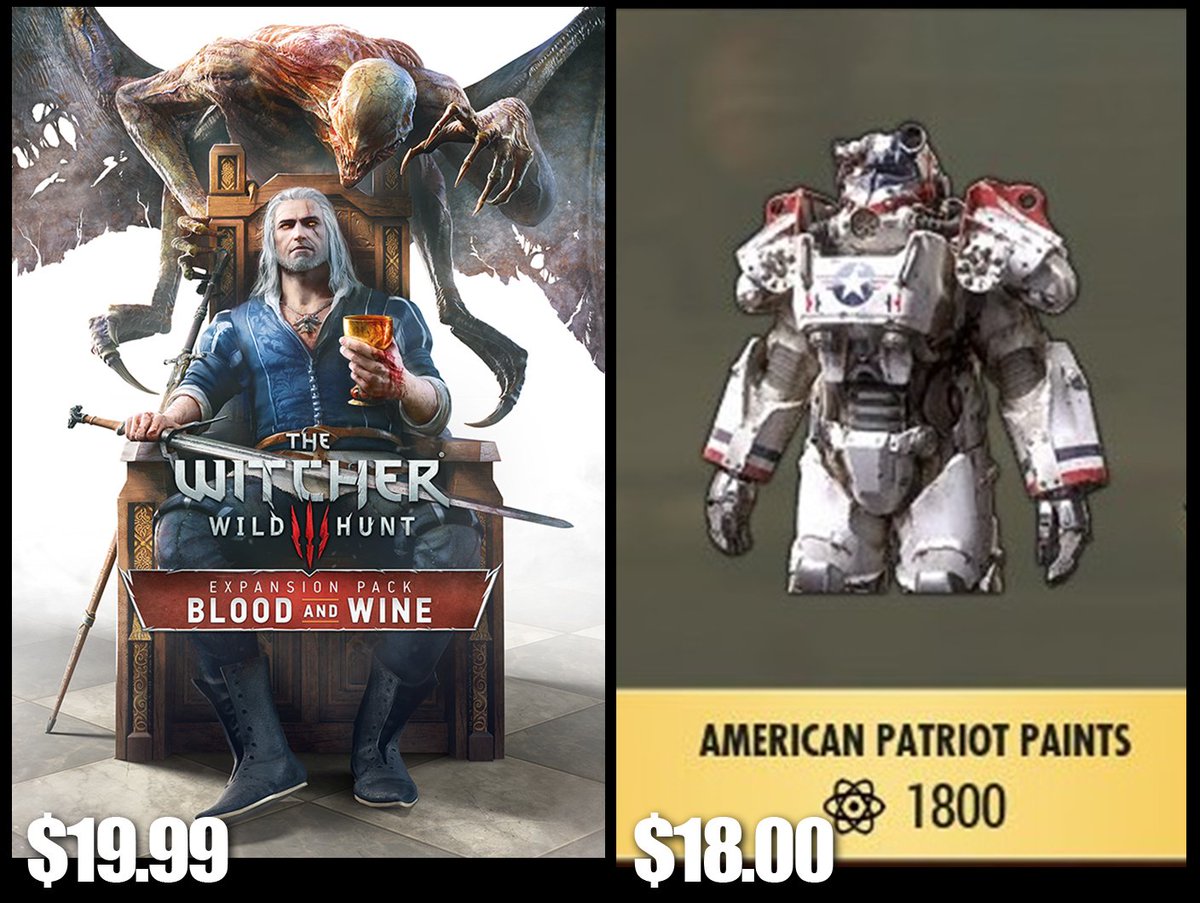 December 17th, 2018, 23:19
Bethesda really have to start asking themselves if they are still game developers. What will their legacy be if they continue down this road?
Quote

Bethesda really have to start asking themselves if they are still game developers. What will their legacy be if they continue down this road?

Hmm I remember reading on reddit that Zenimax or Bethesda hired a new boss. So this new trend could be due to new hires emulating other publishers/developers.

It was mentioned it was someone from EA but I cant find any info online.
--
Think of how stupid the average person is, and realize half of them are stupider than that.
Quote

I complained too, but they said there was a worldwide shortage on that texture.
--
Developer of The Wizard's Grave Android game. Discussion Thread:
http://www.rpgwatch.com/forums/showthread.php?t=22520
Last edited by Lucky Day; December 17th, 2018 at 23:47.
Quote

Bethesda aren't even trying to put out the fire, they've gone full pyromaniac.

Some more great news: 'Looks like Fallout 76 is about to also offer damage buffs for premium currency'

Link - https://www.reddit.com/r/Games/comme…_offer_damage/
--
Think of how stupid the average person is, and realize half of them are stupider than that.
Quote

Anyways, seems they've completely gone off the hill to max short term profits. Don't know what is going on in their studios, but there was an odd leak ( this is 4chan, so take this with a mountain of salt) on it:

December 18th, 2018, 00:34
Well considering all the fake news on the internet these days at least we know we have at least one trusted source of information. If you can't believe a post on 4chan then what can you believe.
--
Character is centrality, the impossibility of being displaced or overset. - Ralph Waldo Emerson
Quote


Bethesda CEO, Robert A. Altman, wishes to monetize pretty much every aspect of his games and have little knowledge of actual game design. The post basically called Altman a “criminal.” This also puts a question mark on the future of The Elder Scrolls 6. It is another project that’s using the same Creation Engine.

The leaker is a young Bethesda coder (“Code Boy”) working at the Maryland studio. He has been with the studio since the development of Fallout 4 under Todd Howard. He is part of a”strike team” that moves from project to project with set objectives. He is currently working on ships in Starfield and says he is trying to get the “ladders” to work. He compared the “ladders to Fallout 4’s elevators.


So, I read through the main post, all the questions, and "Leaker" answers. To be honest, I don't know what to make of it, but in my mind this is probably the most legit looking leak I've seen for Starfield in a year, so I thought I would post it. I got this link from an original post from the BethSoft official sub. For those who don't want to look it through, I will summarize briefly.

--
Think of how stupid the average person is, and realize half of them are stupider than that.
Quote

Noone at Bethesda is panicking about Fallout 76. Maybe there's some frustration for some of the people who were actually working on it. But I'd say they still make a solid profit with it. Management is probably beaming.

Or this "threatening physical violence" part. Like anyone would need to go that far.
It probably would go like this:
- "Hey guys, I really need you to put lootboxes into Fallout 76, about a few weeks after release."
- "They're already coded, just tell us when."
- "How dare you to question my deci… wait, what?"

But since it's 4chan, the batshit crazy part at the end is probably true.
Quote

This is another hate on Fallout 76 thread.

Still the leaks above do add credence that one Starfield is having development trouble, and two we should expect more overpriced monetization of future Bethesda games.

Anyway back on topic $18 for a power armor skin sounds crazy, and overpriced. What's next $100 for pre-built settlements, or maybe charging $20 for weapon packs.

--
Think of how stupid the average person is, and realize half of them are stupider than that.
Last edited by Couchpotato; December 18th, 2018 at 01:30.
Quote

December 18th, 2018, 03:40
Who would even buy that garbage, seriously? Maybe some ten year old that got hold of a parents' credit card, but certainly no adult would waste the money. I don't care how much cash you have on hand, just buying that kind of stuff makes absolutely no sense at all, to me.
Quote

But it's only a rip off if people actually buy it. Is anyone doing so?
--

Who would even buy that garbage, seriously? Maybe some ten year old that got hold of a parents' credit card, but certainly no adult would waste the money. I don't care how much cash you have on hand, just buying that kind of stuff makes absolutely no sense at all, to me.

Trust me, people are buying that stuff. Adult people. Only a minority of all players, sure, but those that do usually spend quite alot.

If you want more extreme examples, look at Star Citizen. There are people who spend 10000$ on that "Game".
Quote

December 18th, 2018, 18:52
I remember a time where Zynga was considered as the Villain and the bad example for a game developer. People have been a bit unfair: At least they were shipping games without that many obvious bugs. Greedy bastards, yes, but at least professional and competent ones.
Quote

December 19th, 2018, 14:07
The situation is getting out of hand. The result of cultural selection at this stage as players were selected for their compulsive buying habits.

An explanation to reach the conclusion reached by this article. So having to fork $20 for a DLC is equivalent to maybe forking out $20 on a cosmetic item that may be acquired another way. Genius.

FO76 distributes in game currency as the simple consequence of playing which means that by playing the product, a player is able to buy the cosmetic item. Yet it is considered the equivalent of being forced to fork out $20 for a DLC that can not be acquired without forking out $20.

Them see, them get. Dominated by buying compulsion. Content is available, they must get it.

Cosmetic items that turn available by simply going through the product yet players feel the urge to spend money to acquire those items.

The situation has got out of hand: make content accessible through playing and buying and players rage as they are overwhelmed by their compulsion. Knowing they can buy the item without playing is enough to burn them out.

December 19th, 2018, 17:08
In regards to Chiens post, how much Atom shop currency can you get by simply playing the game a reasonable amount of time? Is it constant grinding for weeks or months to reach that 1.8k or is it doable for anyone?

Not that it actually matters to me since I'm no longer part of Beths target audience, but it does matter when comparing real money and in game currencies.
Last edited by TomRon; December 20th, 2018 at 20:36.
Quote

December 19th, 2018, 19:58
One word : Zynga.
--
"Any intelligent fool can make things bigger, more complex, and more violent. It takes a touch of genius and a lot of courage to move in the opposite direction." (E.F.Schumacher, Economist, Source)
Quote