September 21st, 2017, 19:07
no earlier save wolf?
--
"As democracy is perfected, the office of president represents, more and more closely, the inner soul of the people. On some great and glorious day the plain folks of the land will reach their heart's desire at last and the White House will be adorned by a downright moron."  H. L. Mencken
Quote

I just got to the boat last night (Lady of War) and left the island. I hadn't been aware about the teleport glove so no teleporting for me. Worse I somehow sold my disarm trap and lockpick kits so screwed myself. Haven't found any way to replace them yet. So no lock picking, disarming, or teleporting for my team unless I can find something in act 2.

There are treaders on the ship that sell the teleport spell skillbook.
Not sure if anyone sells disarming kits, but you don't need that while on ship nor early on the next island.
For lockpicks others already said what needs to be said.

More about crafting? Yes, right?
At a certain moment you'll get NPC to help you hunting for items. Make him search for pixie dust! Why?

Means, when you spot pixie dust or superior stardust at a trader, buy the damned thing. Maybe when I get enough of different runes make a list what possibilities are (with ignoring effects from small and medium runes ofc).

Runes have to be of the same type. You can't combine frost rune with fire rune!

In case someone didn't notice, runes you put on equipment are removable. You can switch them any time and can't ruin anything.
--
Toka Koka
Quote

Oh good idea. I have a hammer if I can find some nails. I just got off the ship last night at Reapers Coast and haven't started to explore yet. I really need to find some merchants as I have tons of gold and even more loot to sell.

I seem to be missing stuff as I haven't found many skill books or trainers either. My main guy I started as two-handed and at level 2 switched to rogue (more or less) like skills. But then I saw Griff do a teleport backstab thing and I was like damn … I lost that as well. I have a really gimped rogue at the moment.

Many of my characters have more memory slots than they can use as I don't seem to find a lot of spell books I can use (I have found a lot but not the ones I want). I mean I have some but my rogue really needs some special abilities. I thought the respec might help with that but no. I ended up not respeccing anyone except my main to remove the one point in 2H weapons and move it to Dual. I actually dislike respec a lot in games as it pretty much kills immersion - so doubt I will bother with it.

Anyhow thanks for the lock pick tip.

If you have an undead in your group they can use their fingers as lockpicks.

Aye I have Fane but he has no points in the skill and I don't see him as a rogue so don't want to waste points on that skill on him. My main is the lock pick person.

no earlier save wolf?

I have tons of saves (think I had 50 by the time I left the Fort Joy island). It is more lost time. I would start over but the combat kills me. I don't mind it and it is fun at times but it is soooooo slooooooow. I don't think I can stomach doing all the same battles all over again right away. Some battles I have been in have lasted over 25 minutes. If I finish the game and play again it will be different since some time has passed. But to go back now and lose 20 hours or so and just repeat everything I just did over the last week … ugg can't.

Plus in some ways I like to live with my mistakes on my first game. On my second play through of any game I have all the meta-knowledge which lets me play a more "perfect" game but it is also less "realistic" (within the context of the game world). Part of me likes to play my first game as a character growing and learning, mistakes and all.

I did find some teleport pyramids although not sure if they will make up for not having the glove or not.

Plus getting the glove is somewhat against my character. He didn't take that quest as the guy said only he could escape and Wolf isn't the type to abandon his companions. So I didn't do that quest on purpose … although at the time I also didn't know how the quest would actually work out and the thing with the glove.

Anyhow I am sure I will be able to finish the game without the glove (if it was that vital to finishing I suspect it would be more apparent) and I think there are spells later on to let you teleport.

All I really want right now are my lockpicks, disarm trap kit and the backstab-teleport-behind-enemy rogue skill I missed out on.
--
Character is centrality, the impossibility of being displaced or overset. - Ralph Waldo Emerson
Quote

I know the NPC you mean. They are getting potion bottles right now but next time pixie dust.

Hmm a trader on the boat - Haven't found one yet. I hope it wasn't Tarquan as I killed him. Don't like Necromancers that much and I didn't trust him.
--
Character is centrality, the impossibility of being displaced or overset. - Ralph Waldo Emerson
Quote

September 22nd, 2017, 14:47
There is a lot of skill book traders in Fort Joy and they add books at certain level thresholds. In Reaper's Coast, you just have to make it to Driftwood, it's the town right to you left after going north a bit to where you "land".

Also, always check what people are trading when you talk to them (preferably before advancing the conversation just in case you know). On kb/mouse, that's the icon on the left side, if you play with a control, it's supposed to be Y. You don't need to have the "I want to trade" dialogue option.
--
It's developer is owned by Sony which means it'll remain a hostage of inferior hardware. ~ joxer
Quote

btw, another trick. Fane's Shapeshifter mask is not undead exclusive. You may use it on others. Why would you do that?
Some characters won't even talk to you if you're not an "appropriate race" and these tend have a persuasion check. Assuming you have maxed persuasion and have pet pal on a sidekick who is the "wrong race" in an encounter, well, just (ab)use Fane's mask!

September 22nd, 2017, 16:34
Ah yea I thought you could only trade with people if they had the dialogue option for it.

I miss having a real manual for this game.
--
Character is centrality, the impossibility of being displaced or overset. - Ralph Waldo Emerson
Quote

September 23rd, 2017, 02:23
Driftwood solved everything. 20K gold later my crew is stocked up on skills, spells, and supplies

I even have a rogue teleport ability.
--
Character is centrality, the impossibility of being displaced or overset. - Ralph Waldo Emerson
Quote

You're a life savior!
Not that I didn't start mixing and writing down my findings, but this is… Huge! Probably not work of one man.
--
Toka Koka
Quote

September 23rd, 2017, 03:43
Looks like the special tag hero (and I guess villains) can be obtained in Act 2 and not just in Act 1. I unlocked Hero by doing a quest today near Driftwood.
--
It's developer is owned by Sony which means it'll remain a hostage of inferior hardware. ~ joxer
Quote

September 24th, 2017, 01:54
Do not craft Eternal Armor the moment you gather all ingredients!
It scales the way you get the version that's your level!

Spoiler
If you craft it on level 18: 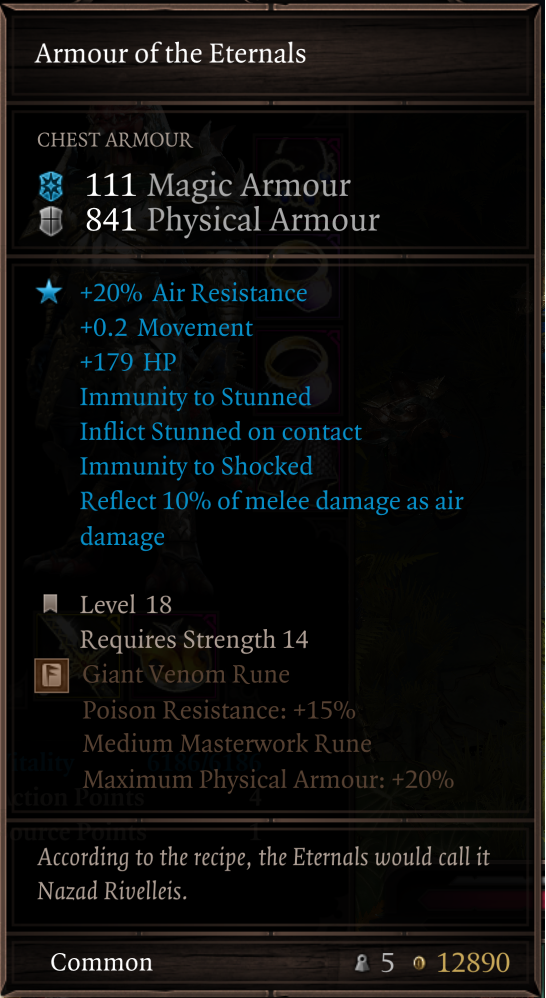 Unbeatable if your fighter is paired with electricity based mage, right?

Do not craft Eternal Armor the moment you gather all ingredients!
It scales the way you get the version that's your level!

Spoiler
If you craft it on level 18:

Unbeatable if your fighter is paired with electricity based mage, right?

You will actually find stuff to make more than one (at least two).
--
It's developer is owned by Sony which means it'll remain a hostage of inferior hardware. ~ joxer
Quote

September 24th, 2017, 13:32
Perhaps I should get that wiki up and running again, so you can store those tips in there and save them for mankind

--
In the beginning the Universe was created. This has made a lot of people very angry and been widely regarded as a bad move. Douglas Adams
There are no facts, only interpretations. Nietzsche
Some cause happiness wherever they go; others whenever they go. Oscar Wilde

September 25th, 2017, 00:54
Not sure if this is a tip or not. But I was rather hoping that since Ifan's wolf depends on summoning level that you could also buff it with summoning spells. Sadly not. Bit of a waste. They should have just made Afrit (the wolf) level with Ifan if you can't even buff his companion wolf.
--
Character is centrality, the impossibility of being displaced or overset. - Ralph Waldo Emerson
Quote

September 25th, 2017, 01:21
It's not just the wolf. All unique pet summons seem poor, I don't bother with summoning any of them any more. Wolf, cat nor eagle.
Alas maybe I'm wrong and perhaps if the "owner" has summoning level 10 it produces better experience, but I don't have a summoner in my party, so…
--
Toka Koka
Quote

September 25th, 2017, 02:28
Summons were vital to my OS1 tactical playthrough (especially early game). I'm agreeing that they do seem very underwhelming in this game.
Quote

September 25th, 2017, 02:39
The incarnate is nice. I made Loshe rank 10 in summoning and her incarnate with a buff made quick work of a high level magister. But I am skipping all other summoned entities and sticking to just the incarnate and things to buff it. Summons has a few other nice spells so it works well with her. She also covers air. I gave Ishan 1 point in fire for haste and clear mind.

Will see how this goes. Also picked up some upgrades on items although broke again

September 25th, 2017, 04:41
The incarnate is awesome, and the cat is great to have for utility because of the swap with owner ability, saved my summoner's bacon more times than I can count.
Quote

September 25th, 2017, 12:24
Summoning 10 (incl. skills on gear) is pretty much mandatory for any "power gaming" style character, but not for the unique summons. The ones that really make a huge different:
- Incarnate, the big version that you get at rank 10, especially once you empower it. Remember that it can be infused by an element, though physical damage is often the most practical (use blood to infuse it if you can, as that is basically the regular version + a few stats and an extra physical skill).
- Widow, the necromancy skeleton summon. Very good tank unless the enemy has good CC spells (it has no magical protection).
- The geo plant. Hilariously high damage against anything that doesn't have poison resistance.
Quote