August 27th, 2021, 21:31
After completing Final Fantasy two, my first inclination was to go ahead and play the third game, yet Peaky Blinders (the game) caught my eye first. So that's next on the list, shortly to be fired up!
Quote

August 29th, 2021, 02:21
Hades. Almost done. I wasnt planning on it, but unlocking the epilogue is nearly done (the goal was just the official credits). It certainly is addicting with the 'just one more run' syndrome (it's 2:00am here).

I don't think it deserves the goty that everyone was shouting about. I find it difficult to nominate a rogue lite for that.
Quote

August 29th, 2021, 03:30
And after finishing Peaky Blinders earlier today, I dove straight into Dark Deity, a game which I got as a Father's day gift a few months back. I've only done two maps so far, and enjoying every second! Good, tight, challenging battles.
Quote

First and foremost, I confess I have a soft spot for tactical squad games, so my impression will be, yes of course, totally biased

Settings.jpg
Settings Menu: Simple and functional, it also has the Keybindings submenu (I won't show it here but it's pretty much the same as always). I don't know if the devs have plans to implement more graphics options, not that I miss them. I'm OK with the options presented here. The Profanity Filter option was previously presented here.


HQ.jpg
HQ Screen: Where we get missions, buy weapons bla bla bla. After the first real mission in the demo I had $15,000. I saved and reloaded and my money vanished

Certainly some demo weirdness, I already posted this on Steam discussions page.


WeaponModeling.jpg
Sample of Weapon Modeling: The saddest part of having zero money is not being able to buy a beauty like this.

Attributes&Skills.jpg
This screen shows the characters' Attributes and the assortment of Skill Trees we'll have access to (some of them - like the Light Armor - are unavailable in the demo).

I didn't finish the demo yet. Having said that, I will share here some few impressions:

-The first "mission" is, in fact, a very short tutorial where we'll learn the basics (moving, shooting, line of sight, reloading, changing stances, the usual drill);
-The demo lacks an Autoloot feature/button when mission ends, which would be very useful. In the demo we have to manually get near the downed enemies and retrieve their gear;
-That goes without saying the game is turn-based with Action Points;
-There is an Overwatch-like feature, called Interruption. As soon as the enemy enters your LoS, you can act (shooting etc) as long you have AP left to do it. Yes, enemies can and will Interrupt you too;
-For those who like some degree of customization, there is no such menu in the demo. Perhaps in the final version, who knows;
-Some chars can heal others, provided they have the means to do that (e.g. medkits). Having said that, in the first mission Scarlett healed Fang when he got shot, but when she herself got hit and started bleeding, she couldn't heal herself (even if her medkit still had one use left). All she could do was crawl around the scenario, she couldn't even shot at the enemies. Since Fang couldn't help her either then she bled out to her death and I had to restart the mission. I don't know if I made some mistake but anyway I think this could be avoided if she (while conscious, of course) could heal herself as well;
-One thing I always get myself complaining about is the text font size, but this time it won't be a concern. The text is crisp and the font used is similar to that one from XCOM2 (if not the same);
-I like the graphics, I am not a graphics-whore. As for the voiceovers, they are nothing to write home about, ranging from average to plain boring in some cases. But this don't detract from the fun I'm having

August 29th, 2021, 22:18
Falling in love with Fallout 3 all over again thanks to Tale of Two Wastelands. It's an entirely new ballgame when you can infuse that old game with the quality FNV mods that have really taken off in the last few years thanks to .dll libraries expanding the engine's capabilities. 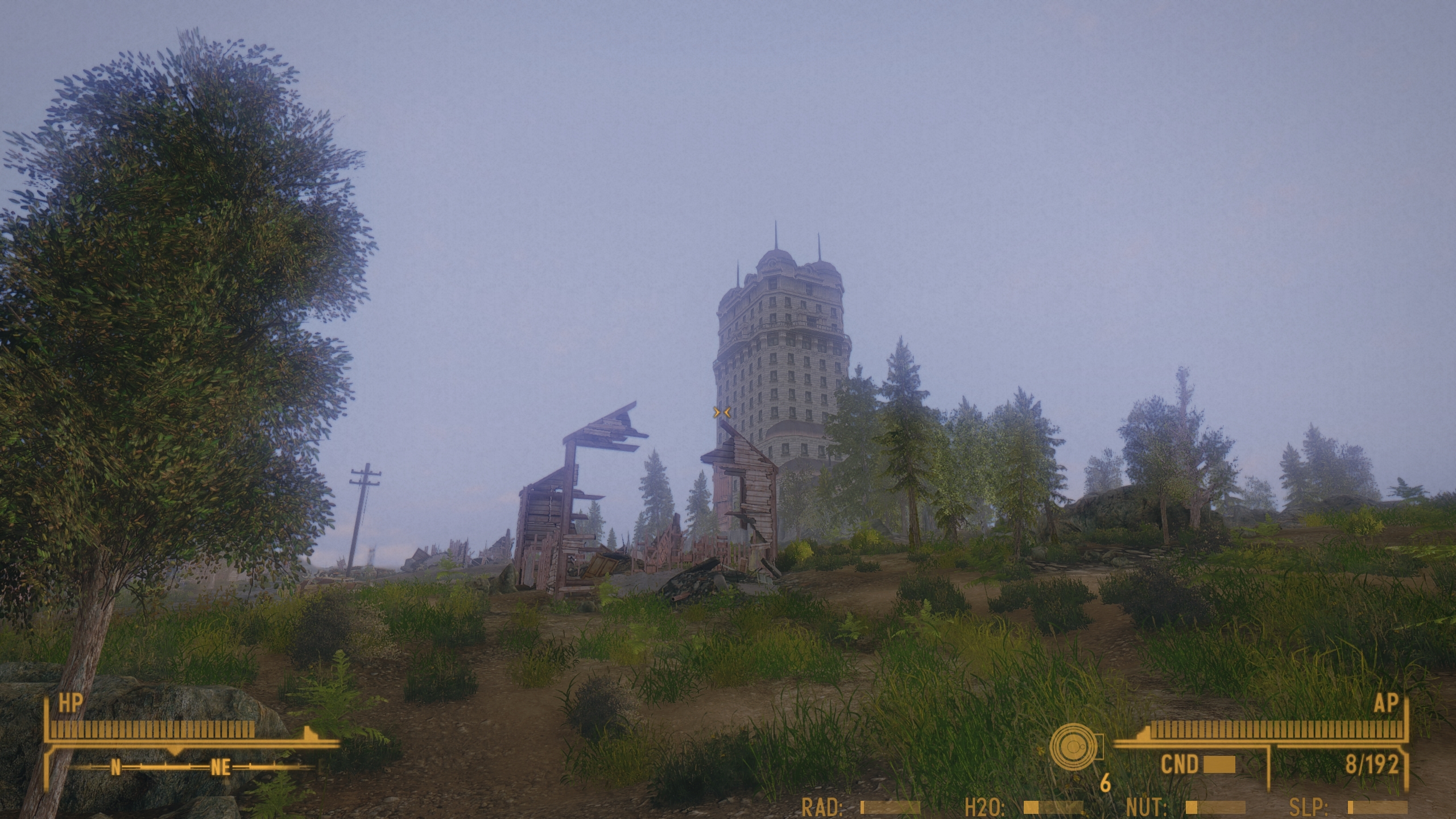 As I've written above, I also posted some of the suggestions/impressions I have on the Steam's game discussion page. And the devs quickly answered (post #2 here), I'll copy-paste their answer below:

"Hey! Thanks for the feedback! The money issue is actually just visual, if you spend any money the correct value will show up. Will fix though!
We'll also have a end-mission screen where you can select what loot you want to pick up (up to your characters weight limit).
As for the healing, we don't mention it anywhere but if you get close to Scarlett with Fang, you can pick up her first aid kit and have Fang heal her. Self-healing will be a skill!

+1 for the devs being so kind and quick to answer.
--
Sou tricolor de coração!

August 30th, 2021, 03:14
I tried playing Mutant: Year Zero. It started out great, but it grew pretty tiresome. The battles are very stealth oriented. Once you fire a noisy gun, everything comes after you. If you're outnumbered by more than a little, you probably aren't going to survive. So you need to pick apart every spawn, using silent weapons and mutant powers to take down as many enemies as you can - then finish off the ones you can't stealth.

Thing is, the game doesn't tell you this, or at least I sure didn't get the memo. Putting precious upgrade points into noisy weapons made the game a lot harder than it should have been. Even if I hadn't, though, taking a spawn of enemies apart one by one gets incredibly tedious.

So now I'm playing Mechwarrior 5. MUCH more fun! The modding scene is doing quite a bit to help the game out, so I've been having a good bit of fun. Even with my limited Battletech-world exposure, it's a bit weird to hit a Locus in the back with an L laser even once without having it explode, but battles would be over in 30 seconds if they stuck with the rules I've grown used to.
--

August 30th, 2021, 15:26
I finished the Project Haven demo and, summing up, I liked it. Last demo mission was tough (even playing the game on Normal mode), especially when our team fulfills the mission objective and has to go back to the extraction point.

The game has potential to be really good, and the devs are quick to answer questions/doubts over the Steam discussion page.
--
Sou tricolor de coração!

August 30th, 2021, 18:10
Fallout three is pretty awesome, it might have more to do for me with where it's actually set than anything else. I've played it through four or five times to date, and know I'll be replaying it again!
Quote

I finished the Project Haven demo and, summing up, I liked it. Last demo mission was tough (even playing the game on Normal mode), especially when our team fulfills the mission objective and has to go back to the extraction point.

The game has potential to be really good, and the devs are quick to answer questions/doubts over the Steam discussion page.

The only thing that might keep me from getting it is the setting. I prefer some kind of sci-fi or fantasy in games like this. It gives more variety to the enemy types.
Quote

The only thing that might keep me from getting it is the setting. I prefer some kind of sci-fi or fantasy in games like this. It gives more variety to the enemy types.

JDR13, I recommend that you (and everyone else interested in this game) check the Steam discussion page and read the feedbacks posted by the gamers. The devs address to most questions/comments (even one long, negative feedback comment) and they said they've already done some tweaks to the game that still didn't appear in this demo. They also share the ideas and features they wanna implement.

As for the manual aiming, their words:
Aim mode: (…) I understand that not everyone will prefer, but we feel it adds immersion and is overall a plus.

To each his own, of course. This is a game I intend to follow closely. If they release a new, updated demo, I'll play it again

Fallout three is pretty awesome, it might have more to do for me with where it's actually set than anything else. I've played it through four or five times to date, and know I'll be replaying it again!

I've only played it twice, ever. Mostly due to the lack of a good narrative (ala Bethesda) but also because of how primitive the gameplay is. TTW definitely helps on the latter and I've really been enjoying a return to Gamebryo modding, for the most part.

Have you played it using TTW at all, Carnifex? The new FNV mods built on xNVSE, kNVSE, & JIP really mature the game into something truly wonderful. And it's stable than ever.
Quote

August 31st, 2021, 03:35
No, I've not played Fallout Three other than how it was originally released, with all the additional content. I don't have much luck figuring out how to implement mods for the most part, lol. Unless they do it automatically, those sometimes I succeed in!
Quote

What an excellent demo. I wishlisted the game as soon I as was finished. It's available to be purchased now in early access, but I'm going to wait for the full release.

I've never been real big into space games, but this hooked me from the start. It's a space sim/RPG hybrid that plays similar to Freelancer. Many thanks to @Moriendor for making me aware of it.
Quote

September 4th, 2021, 03:14
I'm glad to hear something positive about Everspace 2. It's been a long time since I've played a space game, so this just might be on my future shopping list.
Quote

September 4th, 2021, 10:07
Three games right now.
Probably a few more games this month as well so I'm busy.
--
Opinions are like assholes, everybody's got one and everyone thinks everyone else's stinks.
Quote

September 7th, 2021, 06:04
I downloaded Freespace 2 from my GOG library and messed around with that for a bit. I never played it back in the day, but I've seen a lot of praise for it over the years.

Sheesh, talk about a learning curve. This game is a great example of how much more complex older PC games were compared to most games today. There's literally a different command attached to every single key on the keyboard and a bunch more with Shift+ keys as well.
Quote

September 7th, 2021, 17:54
Yeah man, Freespace two is really good and deep. And yeah, a total history lesson on how great games used to be, compared to most of what we see these days. The worm turns, and not always for the better.
Quote