October 14th, 2021, 14:09
When I don't have enough time to play a demanding RPG or if I want to change my mind, sometimes I'm playing puzzle games (among others). I recently tried a demo of Manufactoria 2022 on Steam - it's not on GOG unfortunately. Here's my first impression in case some of you like that sort of game. There are a few others I may report here later (Opus Magnum, [the Sequence], Unit 404, SpaceChem), so don't hesitate to share other puzzle games here as well.

The dev is PleasingFungus Games, they have made another game before, Silicon Zeroes, that I haven't played but the reception was "very positive".

This one is in the category of "assembling something", or "mini-factory". Robots are put on a conveyor belt and you have to design the assembly line to perform some operations, mainly sorting out the defects by testing if the "program" is correct, or modifying their "program". The "program" is simply a succession of blue and red tokens, that you can detect (if next is red, go right; if blue go left, if no token left, go ahead), or write. You may also be asked to build a test that matches the specs and an existing factory.

Below a typical puzzle. At the top left, the instructions and the type (length) of programs you'll encounter. An example at the bottom with the initial program (Start) and the expected program (Goal) when the robot goes out. 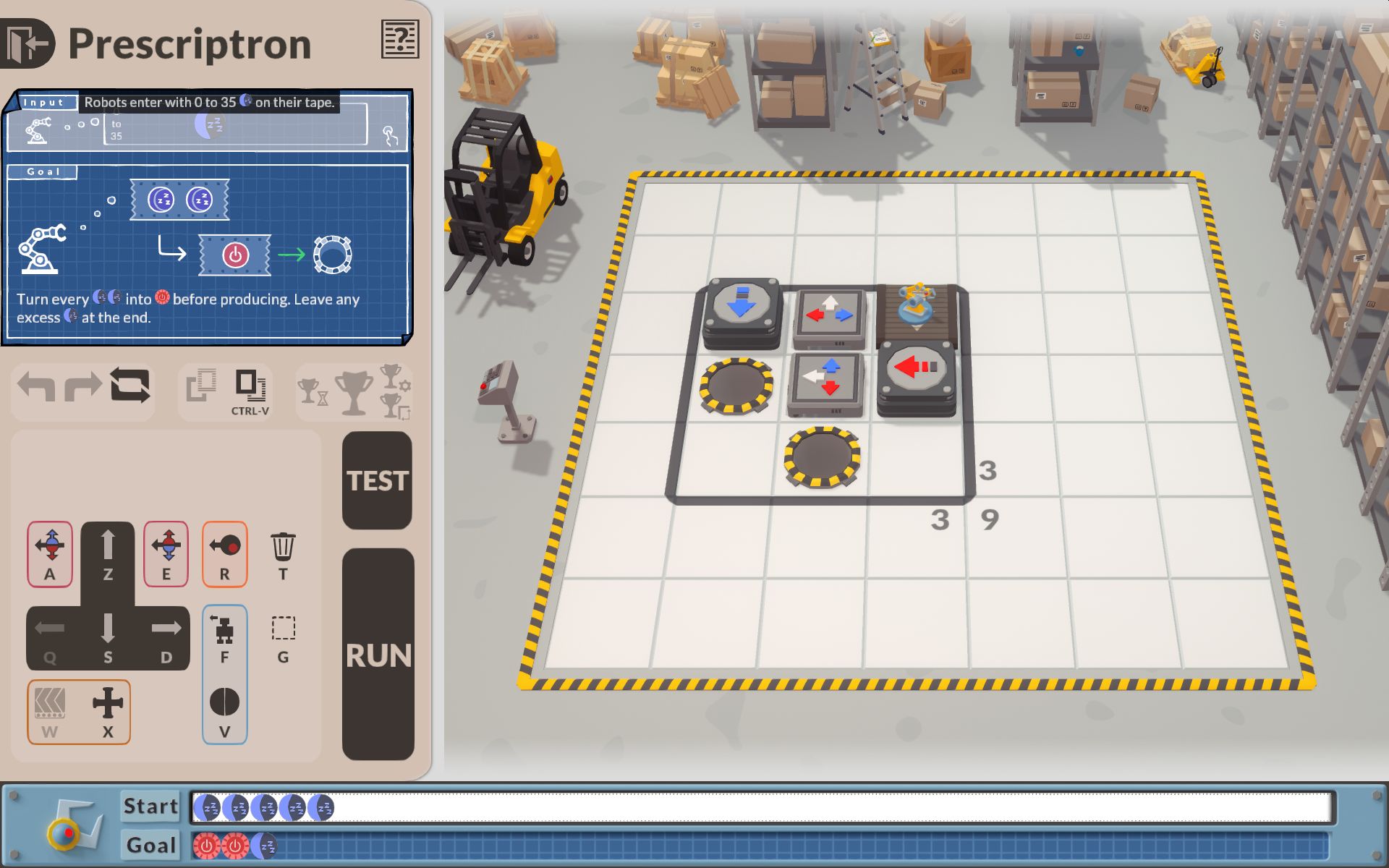 In this example the programs are quite general (may have 0 to 35 tokens), but sometimes the range is reduced, like "2 to 8 tokens", and you can use this information to simplify your assembly line. For example you don't have to test for an empty program.

Once you've completed the assembly line, you launch it, which makes a lot of robots pass through it to test each corner case. If you made a mistake, it will most likely be detected; in that case you can pause and run forward/backward to see what's happening and why it failed.

Once you succeed, you get the results in terms of area, speed and resources vs other solutions. I think the comparison is made with results from other players, like Zachtronics do in their games: 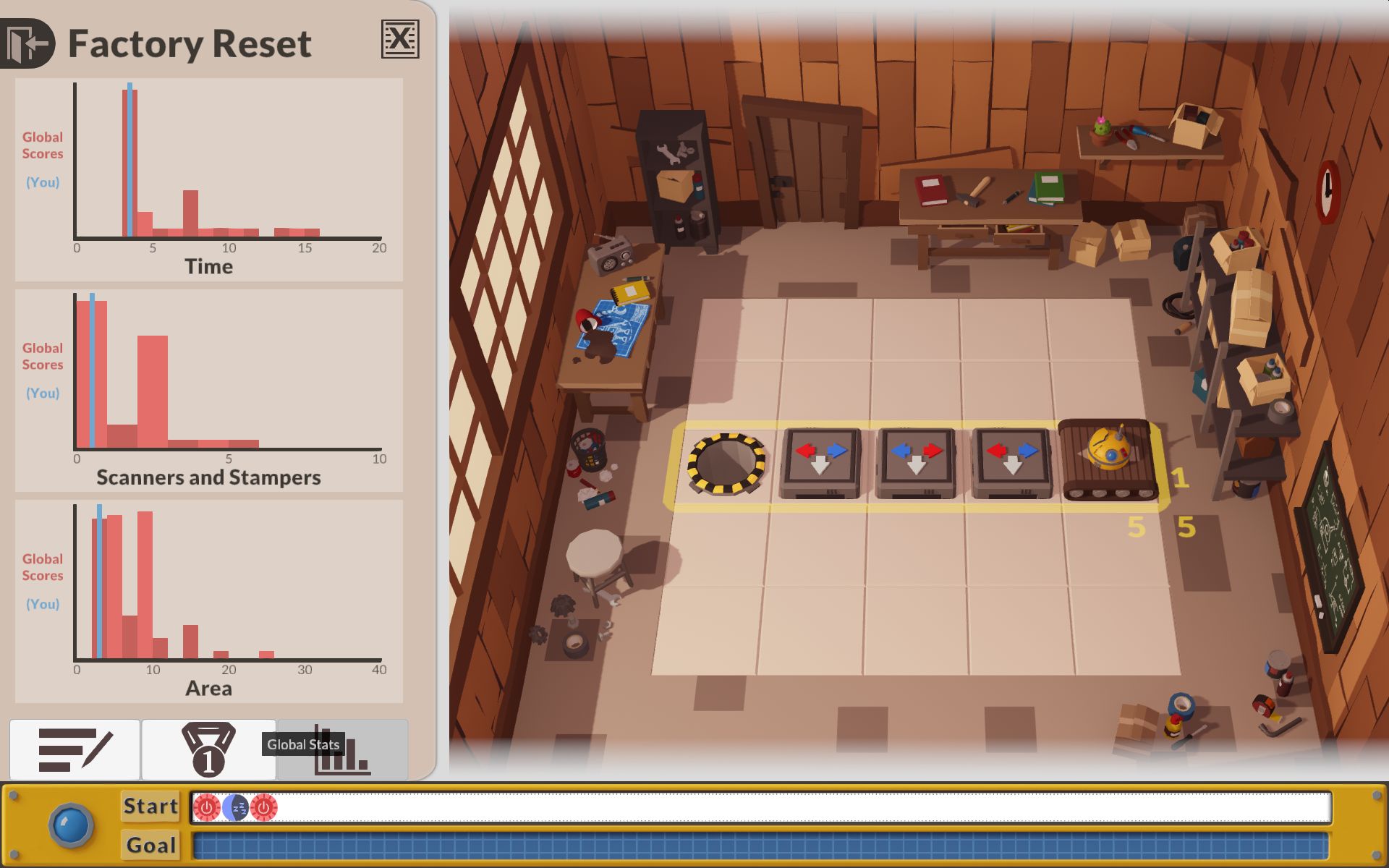 You can change your design and run it again to get the best result in each category, but it's not mandatory. Making an assembly that pass the tests is easy at first, then it gets more and more complex. Making optimal assemblies is harder of course.

I found it quite gratifying when, after changing the sequence order or using tricks, I could finally beat the best score (or in some cases, even go further). And the problems I had to solve were allowing for very interesting simplifications sometimes, they are obviously crafted and not generated automatically.

There are several assemblies for each plant, or theme, then you access to the next stage: 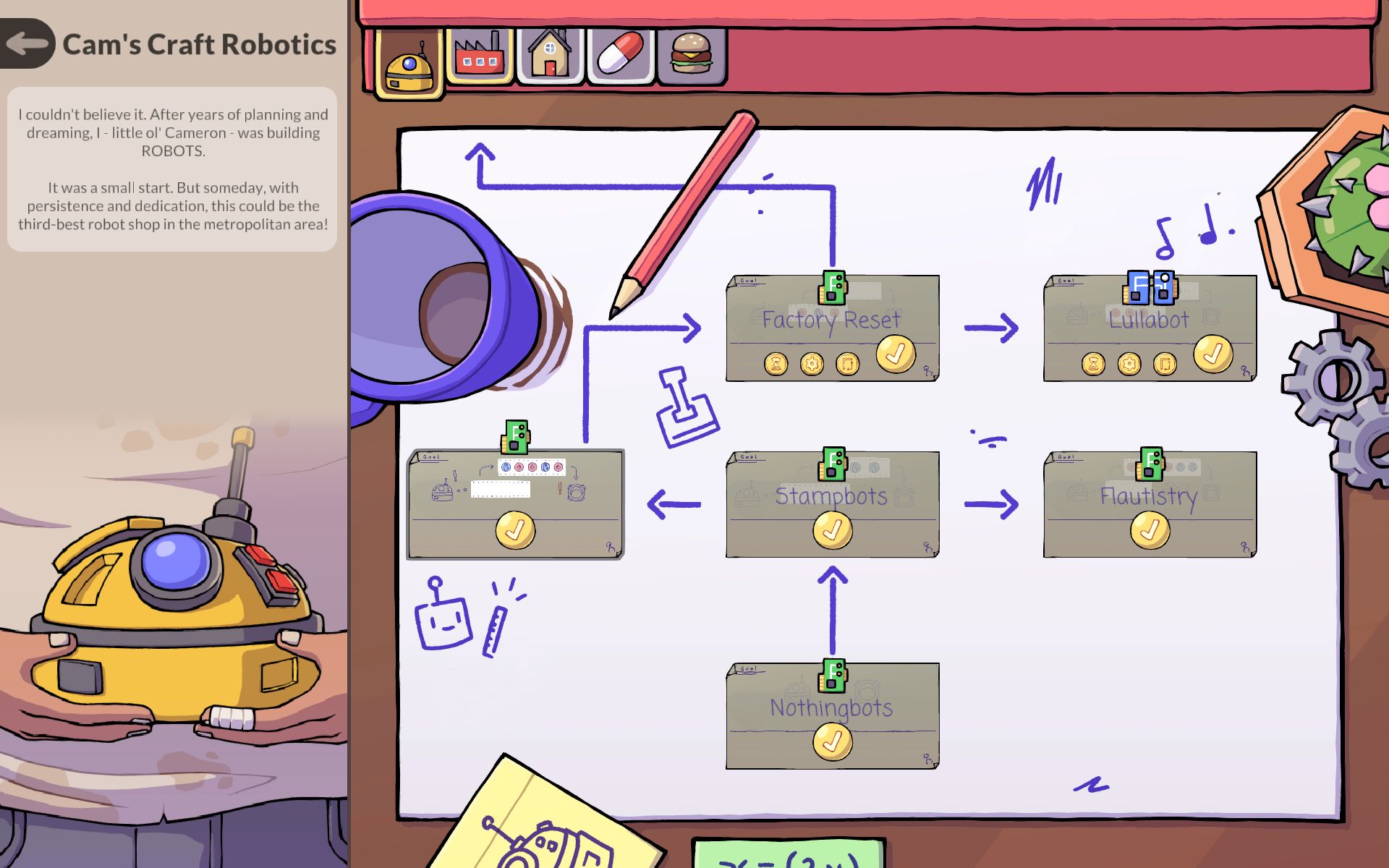 This trailer shows some typical animations to give a better idea of what is going on.

Overall, it's a lot of fun. Steam tells me I've spent 5 hours on the demo (I left it open while doing something else once). I'm the type of guy who's trying to re-do some parts to optimize them until he gets the best in all categories, so if you're satisfied by just passing the test, it will be at least 2-3 times faster.

The game is generally well explained and easy to handle. The tests are well made, they are varied enough and don't feel repetitive, and there are different types of tests which require a different way to approach the problem. The editor is convivial enough, there are even copy/paste functions with transformations that allow you to quickly replicate blocks.

The music is original if not exceptional. The graphics are fine but as you can see, simple and cartoon-like.

The game is still in EA, the final price is set at 16.79 EUR, which makes it the same price as Opus Magnum from Zachtronics. I'll probably do a quick review of that one later on since I've played it too; but I can already say that OM's overall quality is several steps beyond. However, it was released end of 2017.

So the price is fair but similar to older games that may be more attractive and offer more replay value with the editor and community-made puzzles. We'll have to see if Manufactoria 2022 offers the same functionalities.
Quote

It has the highest percentage of positive reviews I've ever seen on Steam.
Quote

I haven't played it myself, but some of my friends have been raving about a puzzler called Baba Is You.

It has the highest percentage of positive reviews I've ever seen on Steam.

I just had a look at the steam page and this looks like a very interesting concept, indeed. Somehow like writing a computer program with self-modifying code. I am very tempted to try that.
Quote

I just had a look at the steam page and this looks like a very interesting concept, indeed. Somehow like writing a computer program with self-modifying code. I am very tempted to try that.

Let us know if you end up playing it.
Quote

October 15th, 2021, 22:09
So Redglyph where you paid to advertise the game? You can admit it no one will think any different about you. I'm just kidding simple games are sometimes enjoyable.

So Redglyph where you paid to advertise the game? You can admit it no one will think any different about you. I'm just kidding simple games are sometimes enjoyable.

Seeing the conclusion, maybe I wasn't paid enough then

No, I just wanted to make the thread more attractive with the help of a few screenshots.

At the moment, I'm having fun with [the Sequence].

It's quite fun because the modules can act on the objects to transport, but also on other modules, so it's a sort of meta-reasoning. On the bad side, it's a port of an Android game and the author made zero effort to make it more user-friendly on a PC. It's not very expensive though, and the puzzles are interesting.
Quote

Let us know if you end up playing it.

Now I have indeed started it. Played the first 19 puzzles and am just right now stuck at the 20th one. I have played for about two hours. A very fun and addictive game for people who like brain twisters. The risk seems to be that you might have some knots in your brain after playing for a while…
Quote

The game is really great.

On the first look it is a block moving puzzle, where you can move blocks around in a grid in order to reach a goal, for example a flag. However the special thing is that the rules of the game are sentences built from game blocks and you can change the rules by moving these blocks and forming different sentences.

For example the game title itself is a rule stating that you control a small creature called Baba with your cursor keys. Each word is a block, so this is a three-block-sentence. If you replace the Word "Baba" with the word "Rock" in that sentence by moving the latter to the place of the former, you don't control Baba anymore but instead one (or several) rocks. The sentence "Flag is win" means that you win by moving baba (or in the last example the rock) to the place with a flag.

A simple example for a non standard solution of a puzzle would be, if you manage to form the sentence "Baba is Win", while being Baba. In that case you win immediately since Baba is already at the same field as Baba.

Since you can change the role of various creatures and items in this manner the game has a similar vibe as the old Lemmings game, though the rules are very different.

The rules are simple but the puzzles get harder and harder and I looked up a few of them in the internet. But this doesn't mean that the puzzles are too hard or unfair. To the contrary, as soon as you see the solution you think: "How easy and obvious, why didn't I see that?" It is a similar feeling I get, when I see how a chess grandmaster won a certain chess position in a few moves which I didn't find after thinking about it for thirty minutes.

Every new trick I learn, whether I found it myself or saw a solution, increases my ambition to solve the next few puzzles of my own.

I have completed about 50 of the puzzles by now (the overall number is something like 200 I believe) and had to look up about six or seven of them. Might have been less if I were younger and had more time and the persistence of my youth…

I like the simple music and GUI, the art style and the overall flow of the game.

All in all I love the game and can recommend it wholeheartedly to every puzzle fan .

Disclaimer: I am a mathematician and former chess player, so other people might find the puzzles harder.

I believe that the game is also great for young students, who have fun training their brain.
Last edited by bkrueger; October 16th, 2021 at 21:30. Reason: typos
Quote

October 17th, 2021, 20:42
Puzzle quest is a lot of fun, probably something most puzzle game lovers already tried though….
Quote

October 17th, 2021, 21:35
I think there was a small franchise ? with the game name of "The Incredible Machine" …
--
"Any intelligent fool can make things bigger, more complex, and more violent. It takes a touch of genius and a lot of courage to move in the opposite direction." (E.F.Schumacher, Economist, Source)
Quote 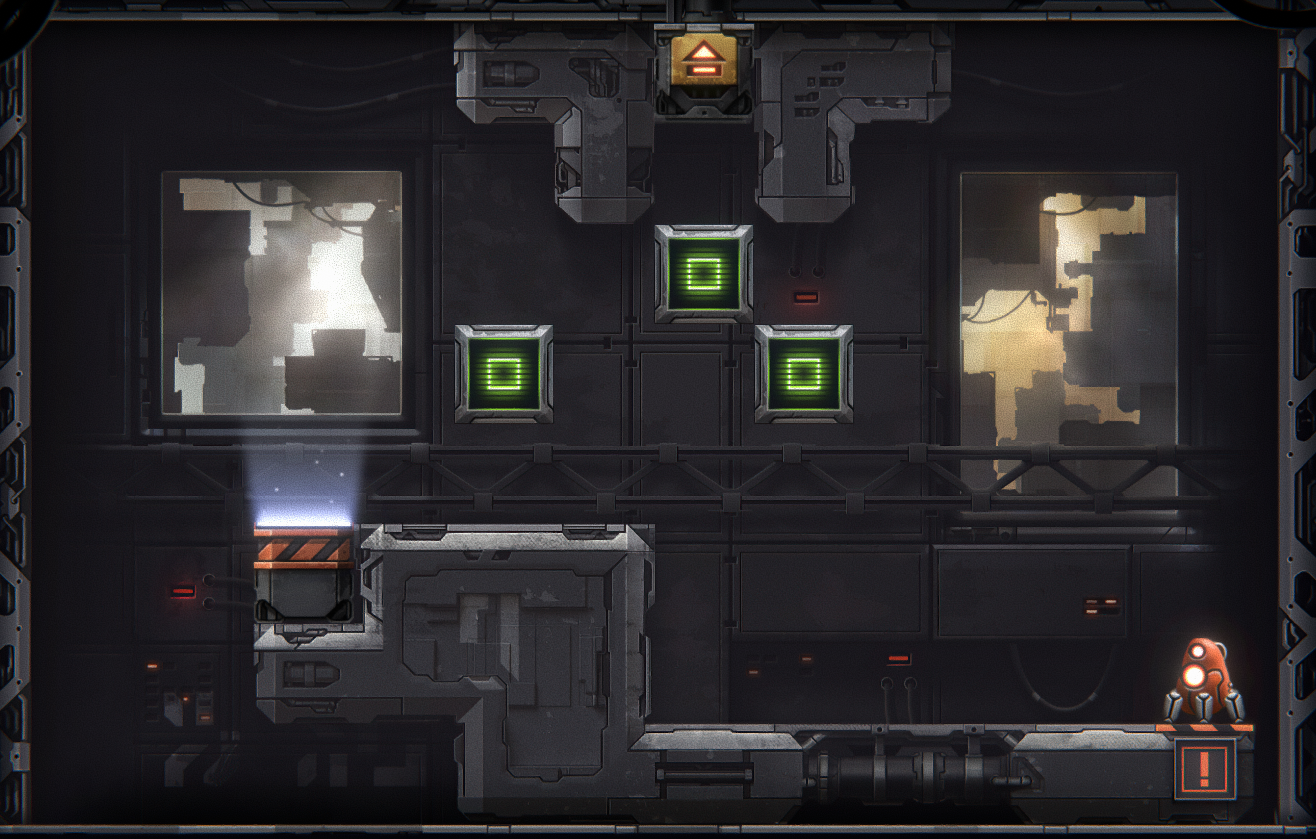 October 27th, 2021, 01:37
I thought "The Room" and "The Room 2" were quite solid puzzlers. Not quite in the same vein as what's been put up here so far, but puzzlers nonetheless.
--
Sorry. No pearls of wisdom in this oyster.
Dallas Cowboys: We just might be good / / Detroit Red Wings: It's a new season
Quote

I have bought Exapunks, from Zachtronics, they do excellent puzzle games. I suspect this one is more for geeks than the others, except maybe Shenzhen I/O (which would feel too much like doing extra hours for me

It's rather fun, I especially enjoy the network missions, but I don't care much for the chat and the AI "dialogues". Not that they're really annoying.
Quote

When the ball is on the platform, walls with the same color as platform are opened and the ball can pass by. Put all balls in the holes to complete the level!

We played ourselve and we loved it!

It would be released at 13 December but you can check the store page and teaser here: