March 15th, 2021, 21:32
I'm playing Earn a Paycheck. This game sucks but I'm addicted to it and have played for over 40 years now. I probably will play for 5 more years before giving up my addiction. I have about 80,000 hours played.
--
c-computer, r-role, p-playing, g-game, nut-extreme fan
=crpgnut or just
'nut @crpgnut
aka survivalnut
Quote

What a truly bizarre game this is. It's basically a misery simulator. A game equivalent of Murphy's Law combined with someone constantly poking you in the eye.

It's grand Strategy, but the concept of strategy is greatly offset by the fact that pretty much every mechanic in the game is designed to shaft you in the nutsack whenever you try to actually implement any kind of strategy.

The main meat of the game seems to be choosing how stressed out you want children to be, being constantly nagged about who your daughter should marry, and paying out huge sums of money in exchange for not risking either death or severe wounds or excommunication.

A game where the objective is to make all the territories around you be held by members of your own family, only for said family members to declare independence with even greater ferocity and aggression than any other faction in the game.

And just when you've got the hang of making sure all the territories are held by 'your guys', you look at the inheritance roster only to find the next in line is actually some random prince from one of your rivals because his dad married one of your daughters 75 years ago, leaving all 23 of your actual family members (with your surname) 33rd in line for the throne.

You have one objective as a king, to produce lots of sons, so it comes as zero surprise that after 3 generations of Kings, all with fertility traits, all the kings managed to produce 1 son and 5 daughters, three times in a row!

Oh and the bugs… its one of those games where you're never quite sure if anything you're seeing is intended or just some weird bug. You check your loyalty stats page and see that everyone is 100% loyal, only to have a territory declare independence a few days later, for example. Yes, there could be an intended game-reason for this, but on the other hand, no, I don't think it's supposed to be like this.

After a few hilariously abstract starts full of laughter, rage and bewilderment, it all gradually starts coming together and begins to feel like something at least approaching strategy.

If a strategy game was actually a roguelike in disguise.

Needless to say I've spent about 60 hours playing it so far and am greatly looking forward to my next session. The addiction factor is 'uge!
Quote

And the cosmic angle to it, i found myself just blinking and going "what the fuck was that all about?"

Haha, same. I also hate it when devs put in stupid cutesy/freaky/clown-like npc's who constantly talk gibberish as some kind of plot device.
--
"You will find your death pleasant, but your fate unbearable." - Hionhurn the Executioner
Quote

Are you talking about the very first Crusader Kings game? I absolutely adore that game. It's so unique and full of charm, I get nostalgic looking at screenshots of it.
Its mechanics are definitely obscure, but I don't remember it being as illogical as you describe though. I never had any issue with succession or people declaring on me for no reason… If they have claims to your titles and they're ambitious, not sure it matters whether they like you or no.

Not sure I'd want to pick it up again though, as the sequel improves on pretty much every aspect. You know that the CK2 base game is free to play on Steam, right?
--
Exitus acta probat.
Quote

Are you talking about the very first Crusader Kings game? I absolutely adore that game. It's so unique and full of charm, I get nostalgic looking at screenshots of it. 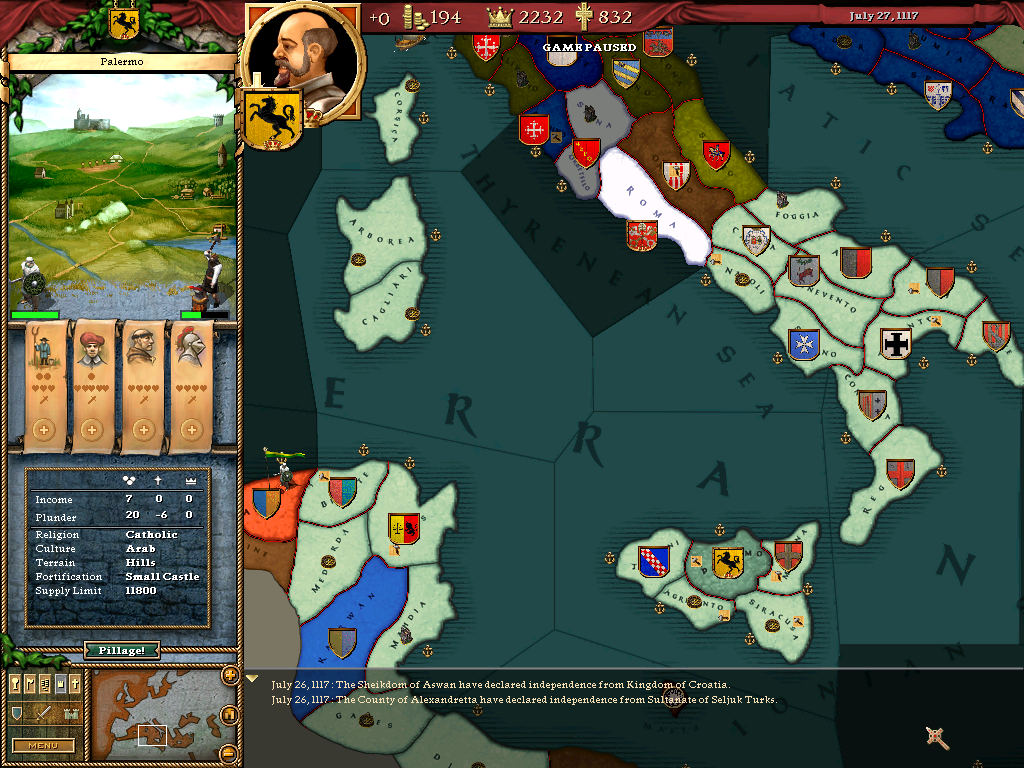 One of my training games. It was I think my 4th start & my first having a peek at a southern Italy start. I started as the Duke of Apulia. I expanded far too fast and had only a teeny tiny Intrigue score by the time I had turned the Duchy into the Kingdom of Sicily, meaning I was forced to pass out loads of territories to counts and then Dukes once I became king.

The cause of the low Intrigue score for this particular king is that he became king when he was about 5-8 years old & as such he no longer gained any further stats from education and upbringing. Because I had to make so many counts my court is also teeny tiny, even with loads of invasions and I had no means of attracting any super-pro wives to be the new spymaster.

All I'm allowed to control myself, is a paltry two territories. I learned the hard way earlier in his reign that holding lots of territories with low Intrigue meant the kingdom went into a "Realm Duress" state. This was the high point of the realm before the disintegration kicked in.

My current game, starting elsewhere on the map, is going a lot more smoothly, though still riddled with hilarious and enraging and potentially game-quitting 'problems', but is good at the moment and may even lead to my first game that gets past 1150AD. I think I've got the hang of what everything does now. Most things at least.

I've no idea why you've mentioned CK2, that's a bit like someone playing and talking about Baldur's Gate 1 and then you start going on about how BG2 is sale dont'cha'know. Like, sure, but I'm, like, playing the first one at the moment, stop derailing the conversation LOL.
Quote

March 16th, 2021, 17:19
Crpgnut: I played that game for many years, and miss it not very much. I've never liked the terms under which I left, but other than that and some people, there's not much I miss at all.
Quote

March 16th, 2021, 21:24
Just to re-iterate the fact that CK1 is remarkably unstable, the ruler is not supposed to have their stats straight-jacketed because they become king at 5 years old, this is not 'intended': 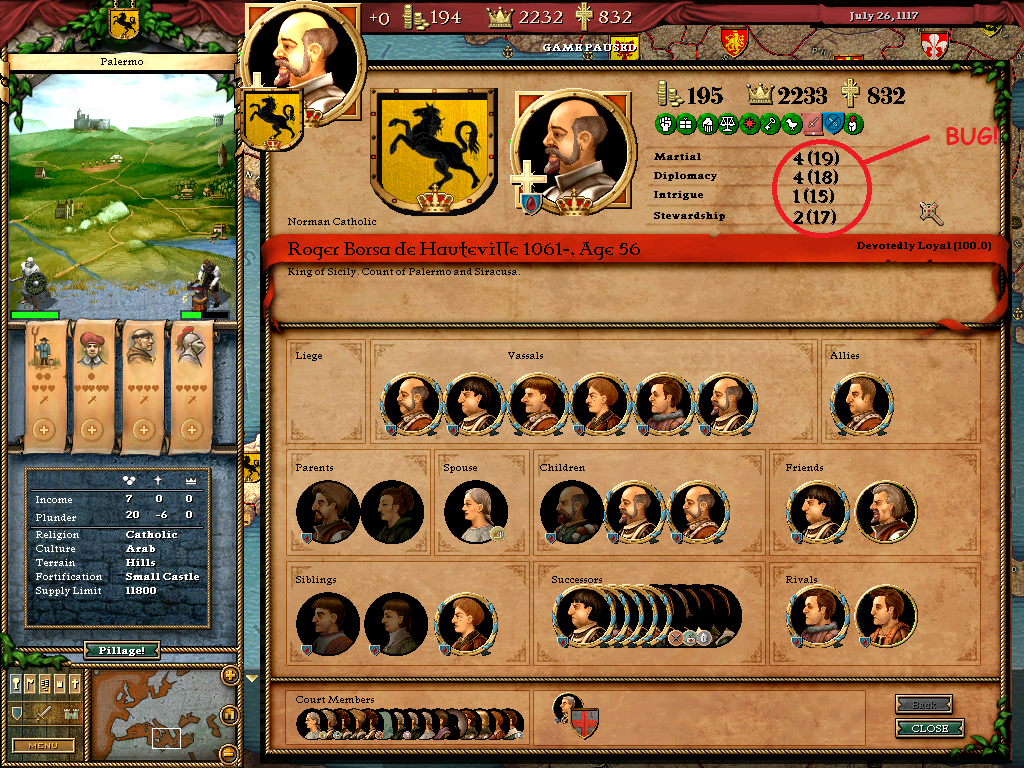 Spending 50 years governing a kingdom with the stats of a 5 year old is a stretch even this game doesn't intentionally try to screw you with. It's just that, as you say, the mechanics are already so obscure and predominantly designed to screw you over that when something like this happens to a new player, how are they supposed to know if it's intentional or not. And this isn't an isolated example of the kind of things that can happen.
Quote

Are you suggesting it's so bad that it shouldn't be commercially available to the public?
Quote

Because I'm enjoying playing it?

Are you suggesting it's so bad that it shouldn't be commercially available to the public?

Are you suggesting I have ulterior motives with my question ?

All I did was ask why you picked up the oldest game in the series, but if you want to be annoying and not answer a simple question maybe don't post in a discussion forum…

Are you suggesting I have ulterior motives with my question ?

All I did was ask why you picked up the oldest game in the series, but if you want to be annoying and not answer a simple question maybe don't post in a discussion forumâ¦

Yes, this thread is full of people asking why the person is playing the game they are playing, it's not at all an odd thing to ask…

And yes, you did have ulterior motives, because you asked why I wasn't playing a different game in the series. Which I'd already answered in a previous post.

March 17th, 2021, 02:13
Well I'm playing both Crusader Kings 2 with a few mods and probably going to replay Crusader Kings 3 due to the new DLC released. I will never touch the original game.

Same with Hearts of Iron 3&4. Paradox always simplify and updates the formula. The new engine is vastly superior to the last one as well. Especially the graphic side.
--
"Facts are stubborn things, and whatever may be our wishes, our inclinations, or the dictates of our passions, they cannot alter the state of facts and evidence." - John Adams
Quote

I will never touch the original game.

This is the part of the post that seems most relevant to my posts, unless you were just coincidentally revealing what game you were playing as per the title of the thread, in which case I apologise.

If this was in conversation with me, perhaps a paragraph regarding the above quoted segment that contains something more substantial than a broad declaration? As I say, only if you were intending a conversation about a mentioned game, of course.
Quote

. . . and now for something completely different.
Still playing Bravely Default 2 (about 30 hours in), and the game cranks up the difficulty pretty seriously! Personally, I love it - finding the most effective job/class combo for a tough enemy is so much fun, I actually classify this game as an RPG puzzler!

(Also, I just simply adore the children's book graphics and the simple story: I'm not a chibi fan by any means, but the recent "gritty and realistic" games miss the mark so much, that such simple and straightforward stuff feels refreshing)
Quote

Hmm. Interesting dispute.
Carry on, I always enjoy a good show with a healthy dose of gin tonic in hand.
(pro tip: that's my super-duper recipe of survival for meaningless home office meetings over Zoom, heh-heh)

It isn't a dispute though…
Quote

I guess he expected to read you write about what you prefer from CK1 over CK2 or CK3?
Quote

It isn't a dispute though…

But it looks as one.