Denial is a river in Egypt.
--
Backlog:0
Quote

Denial is a river in Egypt.

June 16th, 2019, 16:46
Lol this is funny how people refuse to see actual source material and actually try to understand or learn something. Didn't know so many here are Gibson fans, tsk, tsk.

June 16th, 2019, 20:20
Meh never cared abut the books or source material for Witcher III. So I highly doubt I'll care about it for Cyberpunk 2077. All I care about is whether the game will be good.

Witcher III was so I expect Cyberpunk 2077 will be.

Lol this is funny how people refuse to see actual source material and actually try to understand or learn something. Didn't know so many here are Gibson fans, tsk, tsk.

Not sure that this product supports the skin tone of the guys in the vid. Black people can be different skin tones.
--
Backlog:0
Quote

June 17th, 2019, 15:00
You've mixed something. As usual. Or are talking about whatever other game and not CP2077.
This game can't care less about skin variety as that's easily moddable, you may play as greenskinned character on PC if you want. Also, you can paint Keanu Reves in blue or maybe purple, noone cares about your fancy, that's why PC modding exists.
If you buy the console version and can't mod it, well, your problem pal.

While color palette is passe, CP2077 is concentated on detailing gender variety in a world of oppression and corruption set in some imperfect future - use Google for details.
--
Toka Koka
Quote

Its referring to the outrage (some year+ ago) about that black people in the game were too black, or rather that black people had more than one skin tone. It was laughable, as usual when it comes to SJW's coming up with new stuff to be absolutely outraged by.

I wonder if the "deep learning" for the Bot stopped somewhere around when it was reading articles about SJW's, Products and Streaming though.. it has gotten more repeative as of late.
--
Latest creations: Fallout NV: A Wasteland in Bloom / Fallout NV: WFO v3.5
Quote

June 17th, 2019, 17:27
If you ask me, questioning races and colors in videogames is perhaps the most imbecillic thing I've seen in my life. It's pixels, not actual humans. Even if those pixels were living beings, the same imbecilles never mention most of developers suggest that all humanity or a big part of it are severe cases of alopecia areata.

Sjwism with horseblinders when it comes to videogames just needs to die already. We're talking about ones and zeroes that aren't alive nor have feelings.
There is of course a possiblity some country's constitution decides to give some sort of rights to nonexisting ingame entities. Wouldn't surprise me, sjwism is a part of the ongoing decadence.
--
Toka Koka
Quote

June 17th, 2019, 18:33
Having white SJW trying to tell in a very paternal way to black people what they should be offended by is an irony they will never get. Mike Pondsmith who worked on CP 2077 had quite a few words about that.
Quote

June 18th, 2019, 12:46
That is playing the race cards, white people should not tell black people what they can be offended about, a black guy said it.

This guy working for CD Projekt changes nothing to the stereotyping going on in the trailer. At best, this guy is tokenism. And quite a lot of people especially in the US think green.

If you ask me, questioning races and colors in videogames is perhaps the most imbecillic thing I've seen in my life. It's pixels, not actual humans.

People choose their path. Storytolders can not escape stories and what a story is.
In a vid game, an avatar is a mass of pixels. In a story bent product, an avatar is a representation.

Hero could not have been a different skin colour.
--
Backlog:0
Quote

No to you too.
This product is art. An art has no race, has no color nor wages wars.
And you are not an artist nor arts critic. Neither am I, but I wouldn't dare to launch a crusade on art I'm not capable to produce by my own two hands.

On the other hand, mushrooms. Not an art, overpriced, eco hazard plastic, health (spinal) problems imminent, autoaim mandatory. How about you join my pesonal crusade instead? Ah yea well, it's not a trend and it's not as fancy, so you won't. Thanks.

And now before answering some irrelevant attitude towards art, do me a favor and watch Silenced. I don't care where, pirate it. After you do, you'll preach it's politically incorrect and contains horrible scenes noone should ever see.
In the real world thanks to graphic stuff the movie shown, the school where horrors happened in got closed (and laws changed, etc, use Google for details).
I might be too optimistic, but am expecting some sort of effects on real world from CP2077. Trying to make the society better is what art is supposed to do. It can't do it if you'll urge to censor or control the creativity process behind it.
--
Toka Koka
Last edited by joxer; June 18th, 2019 at 14:35.
Quote

This product is art. An art has no race, has no color nor wages wars.

The story. And representational art is not a thing. Just like UgoIgo is not a word.

Product might be art for sure, it is not a game because games are about gameplay.
--
Backlog:0
Quote

June 18th, 2019, 21:49
Lol joxer, you just keep on taking the bait.
When you ignore the rambling of a silly troll, he only ends up sounding like a madman screaming at the moon.

June 19th, 2019, 11:55
I didn't write all of that for him only. Eventually another trendchasing sjw with a gathering lynchmob mission on actual videogames instead of scamware will appear and I have always a post to quote without repeating everything.

Besides that, as I don't have enough time to write about everything, this was a great opportunity to share a certain historical moment where an art, and not hollywood's milking aimed mediocrity, was powerful enough to change some laws. It's a shame I didn't share it in movies thread, but as I still didn't find enough time to cover time loop movies, I won't promise anything on writing a thread about movies that changed the society.
--
Toka Koka
Quote

Lol joxer, you just keep on taking the bait.
When you ignore the rambling of a silly troll, he only ends up sounding like a madman screaming at the moon.

I didn't write all of that for him only. Eventually another trendchasing sjw with a gathering lynchmob mission on actual videogames

No gameplay, no game.

And this product is already fully on trendchasing mode and has its lynchmob assembled to defend the trend.

Better to look at the backyard first.
--
Backlog:0
Quote

Better to look at the backyard first.

Don't have one. I do look in my eye and in my butthole first.
But is it really a sickness when one, in this case me, is being sick of mushrooms? Or I'm just immune to the modern spanish flu case. Cases should be more precise. sjwism is one of those.

I was going to get this but Keanu Reeves is such a bad actor I don't think I will anymore. 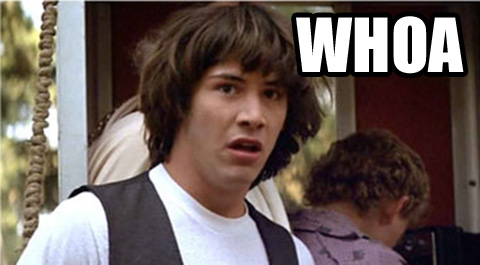 The cringe and sellout was outweighed only by the Keanu fanboys.

I mean, it's a cool enough game that I'd take the gig but it was also pretty WTF and I think he drew more attention to himself than the game.
Quote