View Poll Results - What race will you be in DAI?

Voters: 21. You may not vote on this poll

No elfs or dwarves though. I don't like playing either of them and there is no point playing the game if I don't enjoy the character I am playing.

Human mage makes the most sense since I then see the Noble and Mage changes that occur in the game (dialogue, missions, etc.). However I admit the fighter is a lot of fun to play and I like the idea of role playing Varg. Like wise for Kveldulf.

Right now I am leaning towards playing both Kveldulf and Varg and just alternating .. course that does mean three times and not sure I will last that long. I suppose I have the time as the only other games that are coming that I will play are Witcher 3 (delayed) and Project Eternity. I still need to finish DDOS though and I am still doing modding and ENB work on Skyrim.

Yea plenty to keep myself busy.
--
Character is centrality, the impossibility of being displaced or overset. - Ralph Waldo Emerson
Quote

I always feel mage gets most out of story in DA universe. I've made some choices dealing with companions and quests, I wonder what outcome I will get in a long run. At the moment I'm argonizing whether I should side with
Spoiler
mages or Templars. It seems siding with mages are easier at this point since it doesn't cost any power and I think you also get to recruit Dorian first instead of Cole (Dorians description sounds more interesting to me at this point), but I'm afraid that will make some people unhappy (Cullen, Vivienne - she doesn't seem so fond if current rebel mage leader)

December 9th, 2014, 21:43
Pick any side. Both have a separate story and different main quests later. Neither is easier from another from what I know.
Save the second choice for the replay. But in the end both choices will lead to the same outcome just with different ways.

The actual difference is which sidekick you want to meet first. If you'd like to have Dorian first, go with mages. If you'd want Cole in your party first, pick templars. You will have them both eventually of course (the second one will come to Skyhold).

You can't lose advisors so no approve/dissaprove with them. You can however romance two of them.
Partytype sidekicks if not at least a bit happy after your choices - will leave Inquisition for good. So just suckup to them all the time.

December 9th, 2014, 21:58
When it comes to companions, even with 0 approval neither Solas or Cassandra will leave. They will hate your guts , refuse to talk to you and you get the chance to punch Solas and see Cassandra drunk.
Quote

If only norespawn mod was available already…
--
Toka Koka
Quote

Didn't know that. LOL
I must see it!

December 15th, 2014, 15:24
I re-did my mage and finally got something I like. I also broke down and picked up Sera, who isn't as bad as I first thought. There first meeting was pretty amusing. Love the facial expressions in this game.

December 15th, 2014, 15:31
In my case, after initial bad impression, as time passed, I found out that Sera kicks arse.
Personality and fights, both.

Yea I tried… Y'know…
Spoiler
And it actually didn't sound awkward when she said: "Your thing is not my thing".
I just accepted that. Afterwards, I returned to the roof with her many times. It was fun.
In the end of the game I believe Sera and my hero were best friends forever. Didn't get that feel for any other sidekick.
I dare to say that Sera is the best written/designed character in DA3. Not that others suck, but she's something special.
--
Toka Koka
Quote

December 15th, 2014, 16:12
Okay, wgd always posts pics of male after male after male. Any chance we can get a bunch of screenshots of the ladies? Not all of us like looking at dudes

But here, just for you, my favorite villain chick from DA3, commenting the amount of neverending trashmobs: I believe I did post it before and I assure you, many didn't see this one in their game yet (C&C quest).
--
Toka Koka
Quote

The game is full of tits and butts if you're after that.
--
Toka Koka
Quote

January 5th, 2015, 00:30
I would post picture of my Inquisitor, except I'm really not happy with her. She look like pale skinned Josephine. I hate seeing someone who look like me in the game, and I have to see Josie a lot!! (and I happened to like her as well).

I was really annoyed at the fact some of the males (especially Cullen) are so damn good looking including some of male Inquisitors I've seen but there are NO GOOD LOOKING FEMALE Inquisitors! Well, at least not the human ones. Most of human female Inquisitors are slightly different versions of Josie/my Inquisitor. It's annoying!!! And yeah, wtf happened to Morrigan??? She's so hideous to look at now and yet she look terribly familiar! (and sounds exactly the same as well).

December 10th, 2015, 07:13
I basically repeated my DA:O character, a Dalish elf wizard, so another gal for CRPGNut! Though this game really isn't big on the sexy thing. (I totally blame the Chinese!) 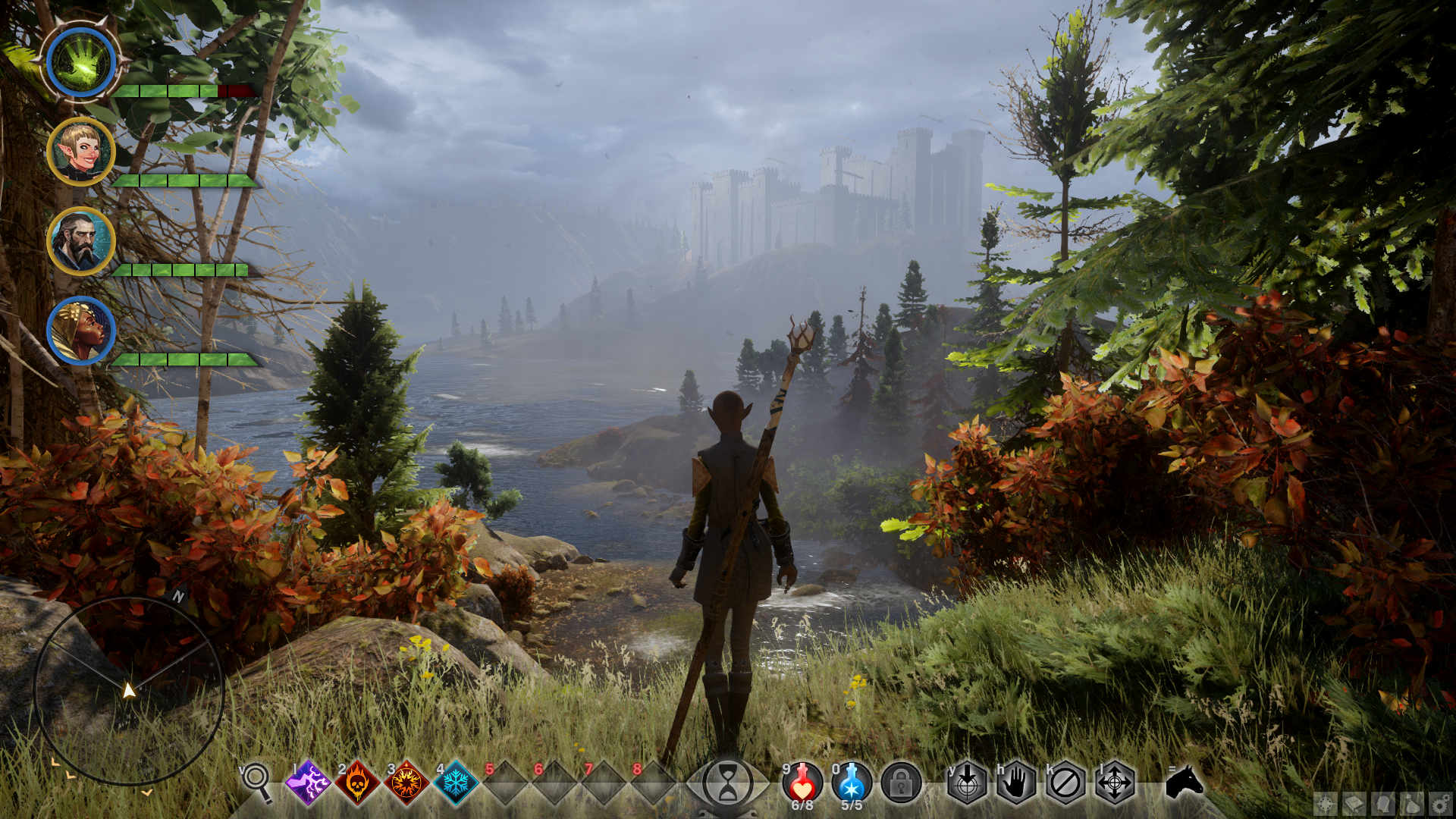 It was a dark and stormy night 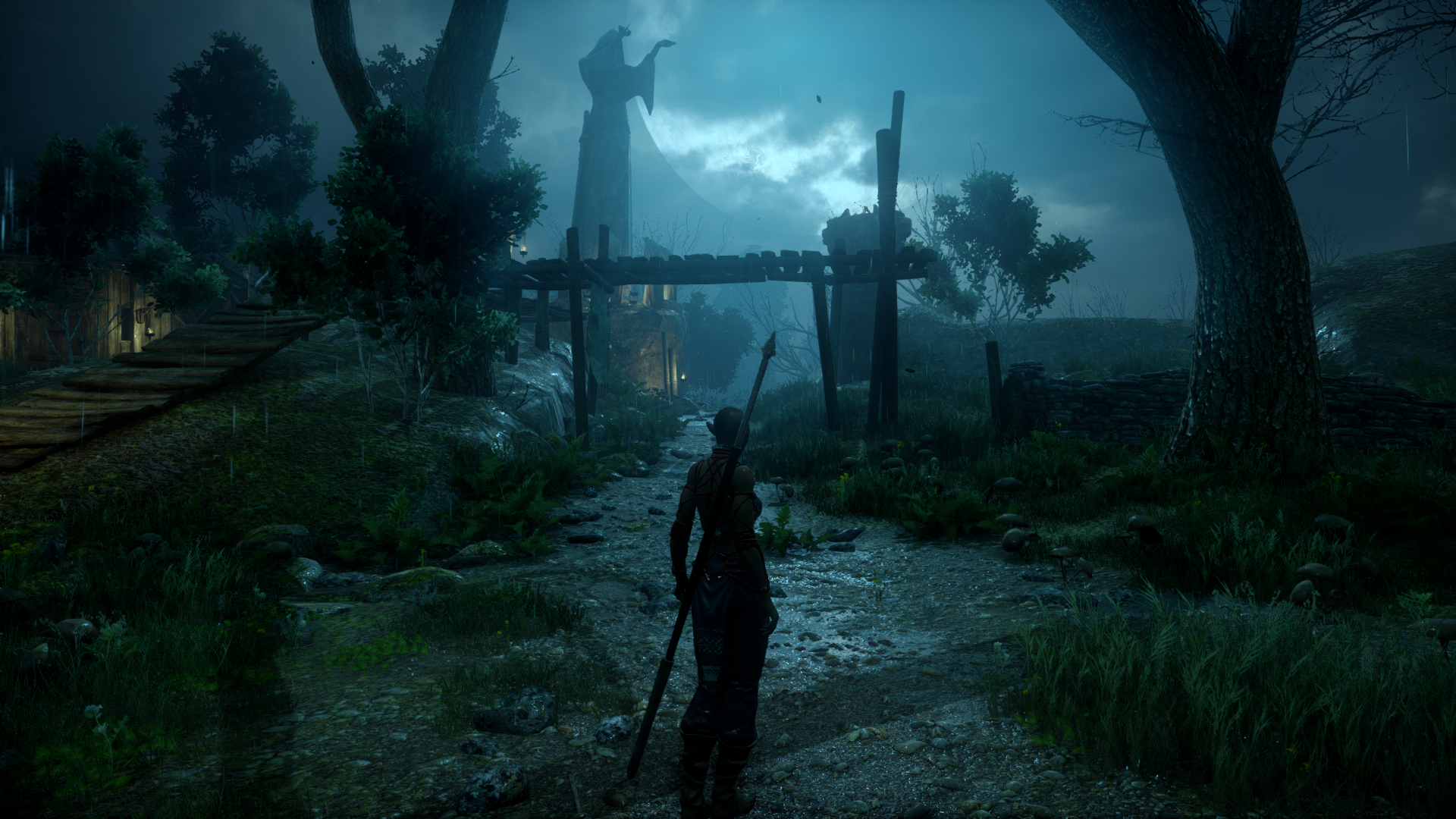 I was an adventurer dummy once, then I took an arrow to the oh, jeez! SERA!!

This "choice" made me LOL 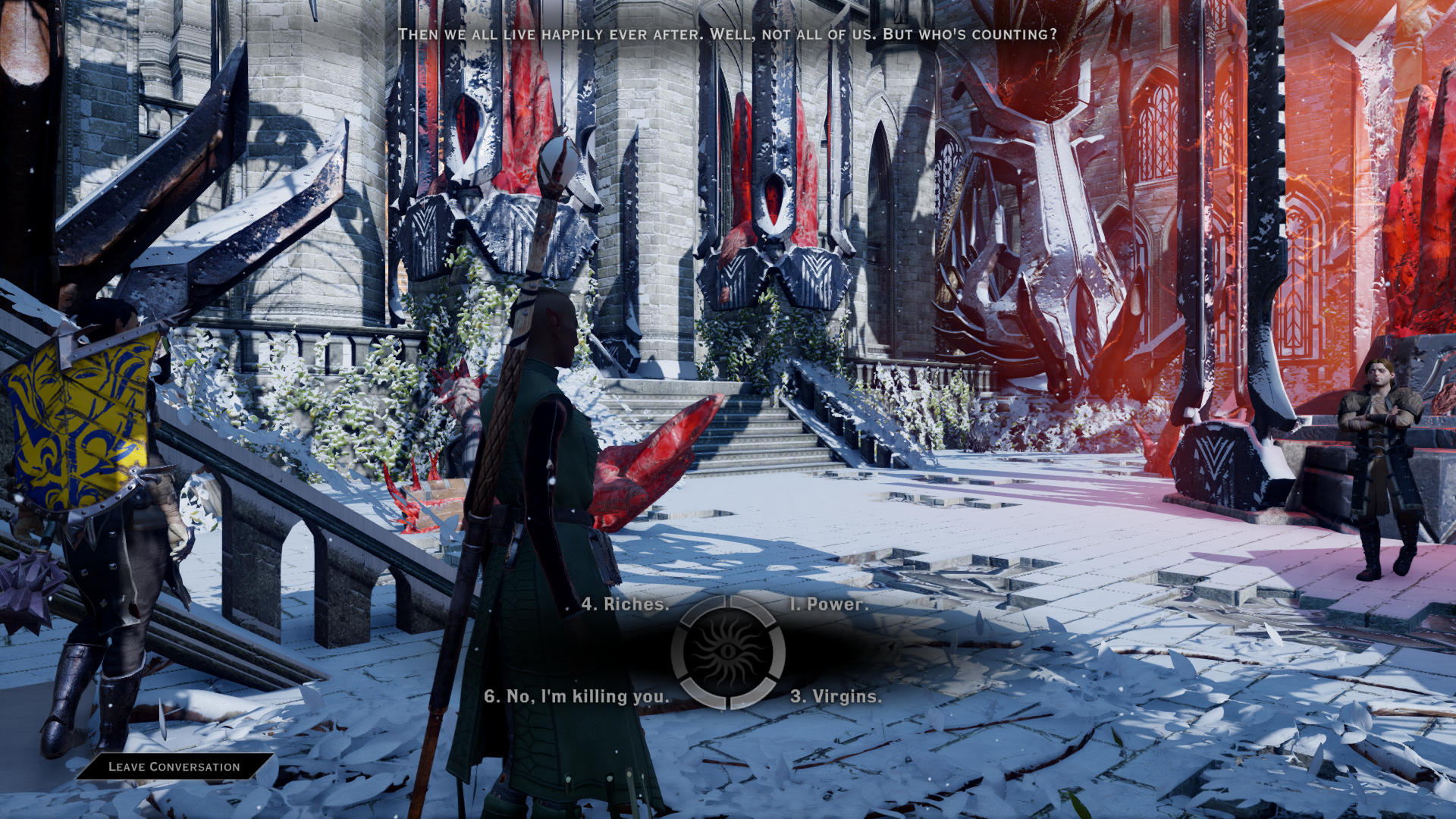 Now about those bears 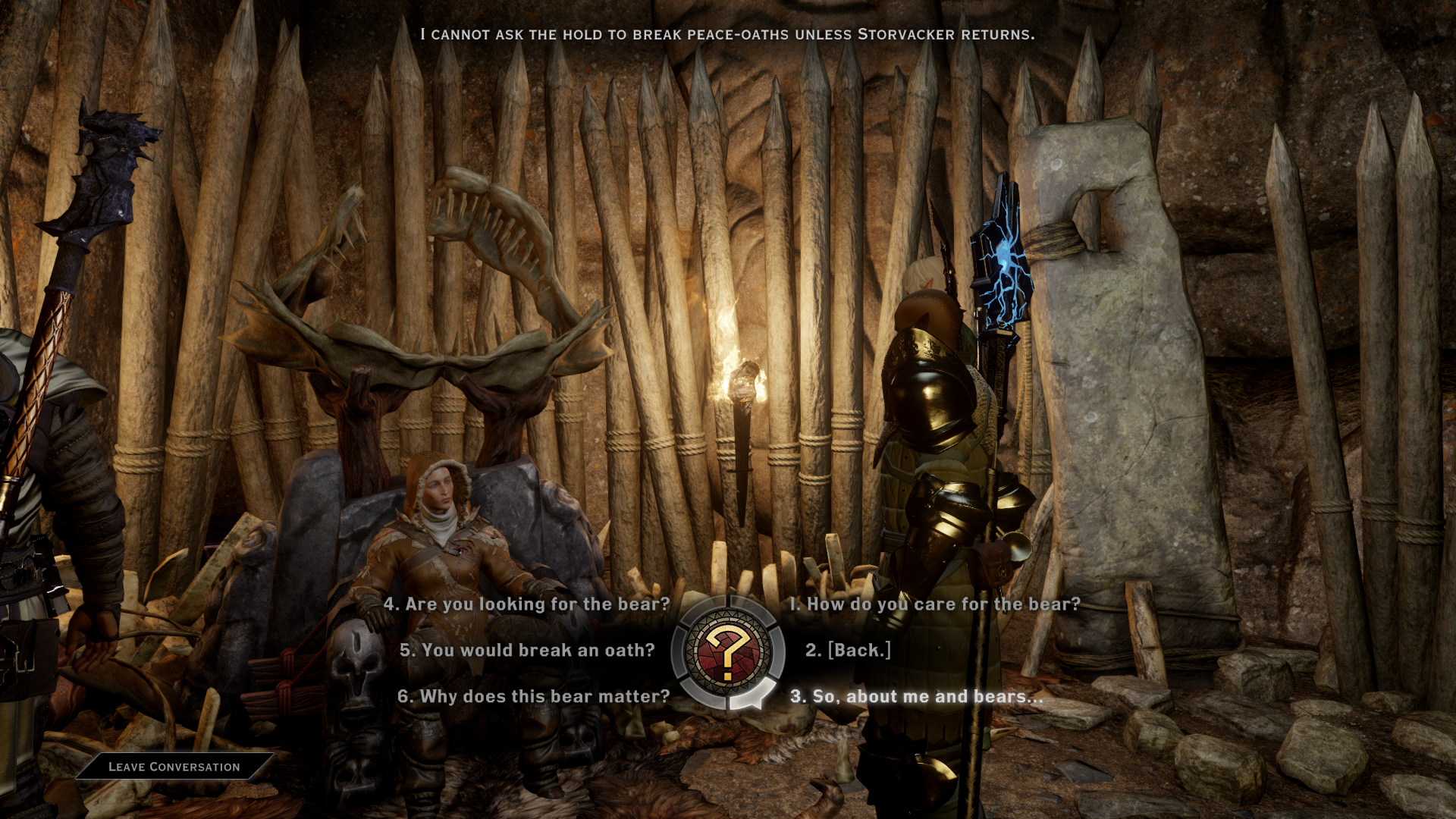 I'm sorry about the mess, I didn't know I was going to have company. Oh please don't write me up! 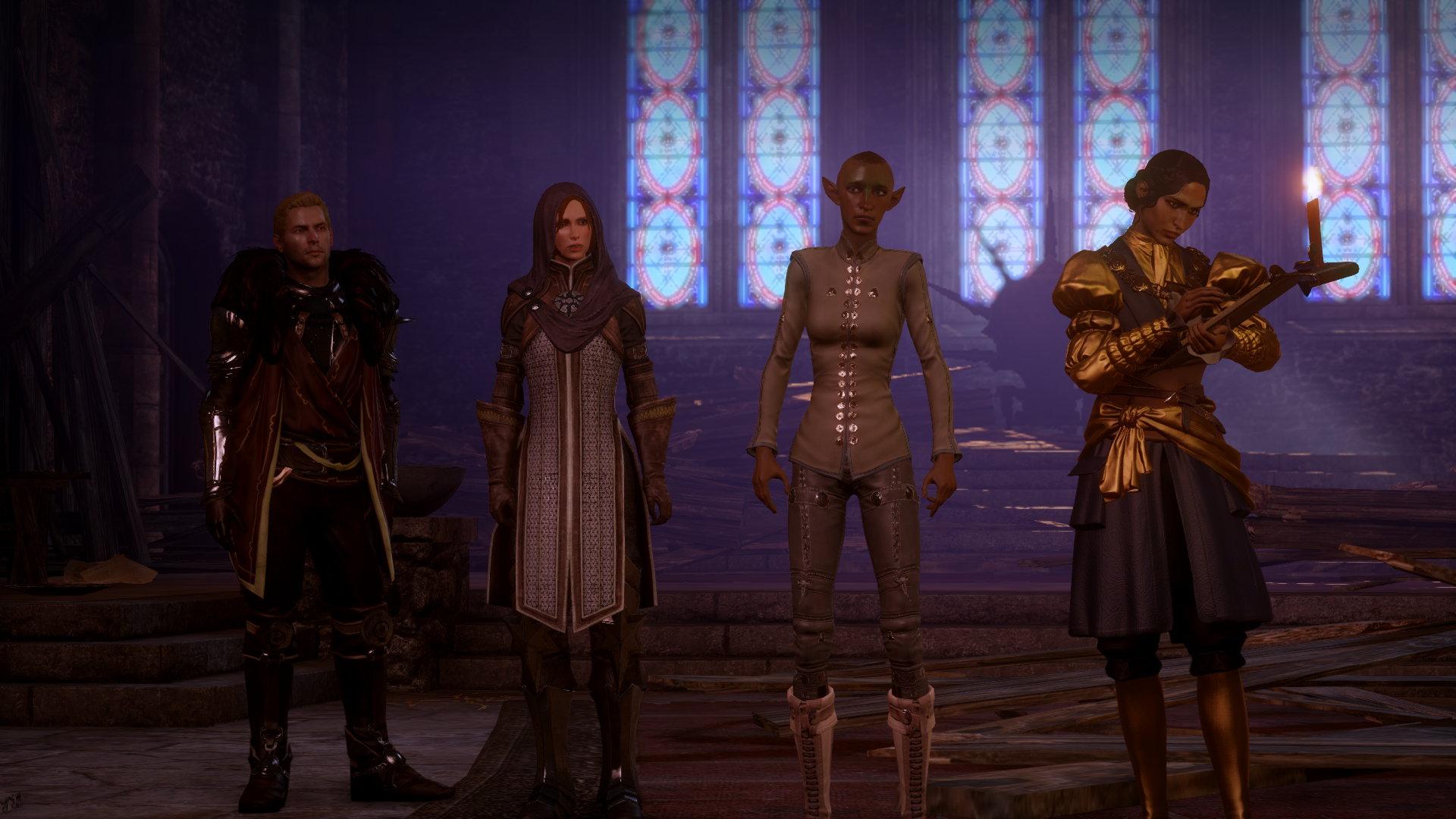 My favorite pic so far 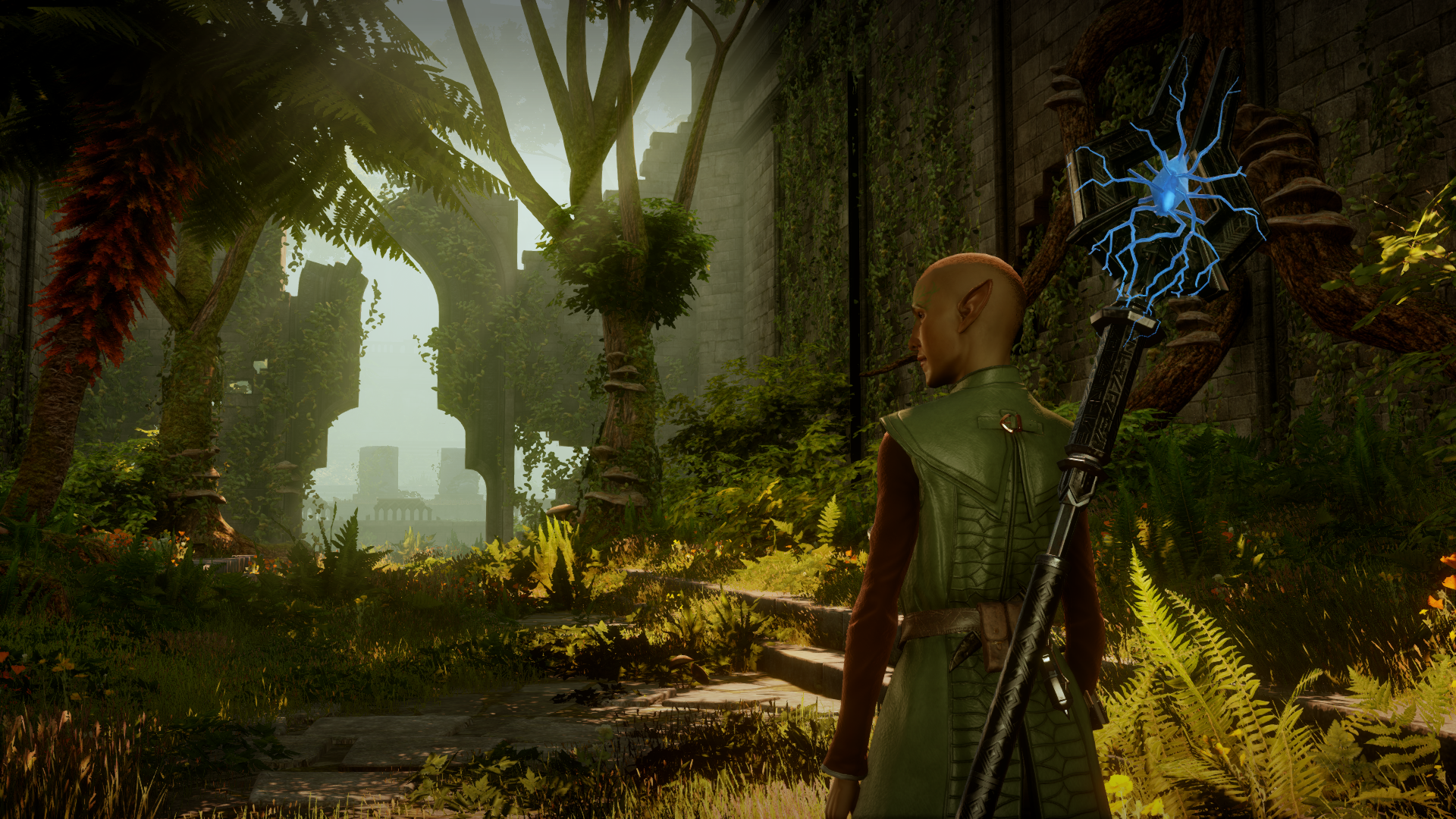 (but then, I like green quite a bit ;)
Quote

December 10th, 2015, 15:26
I have not played this game yet. Do people on the Watch like it? Other then the bear respawns. What does it play like compared to other series or games? Not including the first two games of the series. Would maybe like to play this before I start Fallout 4.
--
"From knowledge springs Power, just as weakness stems from Ignorance."
Quote

December 10th, 2015, 16:06
If a mod that disables those respawns existed, the game would be worth of at least one star more.
Sadly, it's not the only thing the game doesn't do good: horrible tactical WASD controlled view, 8 skills/spells cap on currently available "arsenal", more or less missed opportunity to give war table bigger importance and not using time as currency as the game is not phonegame, horrible inventory, perhaps too many of boring fetchquests as sidecontent, finally whoever decided to put bloody Mass Effect 2 sonar in DA3 should have been fired instantly.

That aside.
The game's main story and it's quests are some of best stuff that you can see in games, especially the spectacular choices&consequences masterpiece material in court dance quest. Areas are biggish and while exploring because of respawns gets annoying, they all feel different just like we had in Gothic 3. The game actually contains some challenging fights which is a nice surprise from Bioware (dragons). Sidekicks and other characters are written well, so well some you'll hate although others adore them and vice versa (example: Sera).

A very good game that could have been a masterpiece if it didn't follow EA idiocies (like MMO mode).
I say buy it.

Is it better than "famous" openworlds released in 2015.?
IMO, it isn't. It's not better than FO4, TW3, nor, if I have to add, MGS5.
It's definetly better than GTA5, then again it's hard to find an openworld that can't be better than that overrated NFS with story game.

One more thing, I didn't buy nor have any of DLC. For those wait for others' input. All I know is that DLC is not again Bioware Points scam - which is another positive thing about it.
--
Toka Koka
Last edited by joxer; December 10th, 2015 at 16:18.
Quote

I have not played this game yet. Do people on the Watch like it? Other then the bear respawns. What does it play like compared to other series or games? Not including the first two games of the series. Would maybe like to play this before I start Fallout 4.

Why not try it yourself? There is a free demo on Origin. It lets you play for up to six hours or a certain part in the story. Well, the description of the demo says six hours but for me it ended after about three hours and I assume it ended because I hit a certain point you're not supposed to get past in the free trial.

Anyway, it's a pretty generous demo and you could even push it as far as playing the free trial for six hours, then buy the game and return it within 24 hours for a full refund, i.e. you could theoretically demo it for 29h:59m:59s before using the final second to make a lightning-fast keep it or dump it decision