October 24th, 2019, 20:46
It's not really private "server" access. More like private instance. As soon as the person(s) with a membership logs out, the instance ends as well. Compare that with something like Minecraft Realms, which is indeed a private server for you and your friends to log in whenever, for $8/month.
Quote

October 24th, 2019, 22:14
I don't even have the words for how silly this idea sounds to me, yet I know two or three blokes that will subscribe. Shame, shame, shame.
Quote

October 24th, 2019, 22:22
So given the poor reception and state of the game at release, is it fair to say they released a substandard game and are now charging their customers $100/ yr to have it fixed?
Quote

So given the poor reception and state of the game at release, is it fair to say they released a substandard game and are now charging their customers $100/ yr to have it fixed?

No, having it fixed, by Bethesda standards, entails allowing modding so that others can do it for them. Modding is still currently not a thing - my guess is that they're staggering out their PR fiascos: today an overpriced subscription, tomorrow the news that any and all modding will be funneled through Creation Club. You know, for quality assurance reasons.
Quote 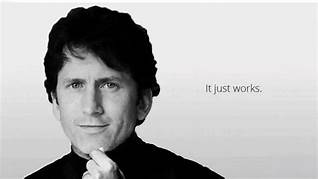 Lemme fix it:
Also, that guy I always think is crpgnut:

October 30th, 2019, 17:05
A friend and his crew are hooked on Fallout 76 trash.
They bought into the subscription hype and got one.
Turns out they are "on demand" servers and require a subscriber ONLINE at all times or the server shuts down.
Also they got hit by a bug where they are losing items on the private server. Apparently Bethesda says they are just invisible and untouchable, they aren't actually lost.

So pathetic.
--
How about all games have a single huge lootbox you pay for up front that contains all the options, items, skins, unlocks etc? I'd pay for that!!
Quote

Turns out they are "on demand" servers and require a subscriber ONLINE at all times or the server shuts down.

October 31st, 2019, 05:18
Yeah, it's certainly better that they are saying there are huge problems instead of just whistling away while it all burns. But still, it's a pretty hot mess.

I wonder what the Elder Scrolls Online community is thinking right now.
--

I need my singleplayer fix, not some mmo drones opinions.
--
Toka Koka
Quote

October 31st, 2019, 16:25
I cannot even conceived of the schmucks that would pay for this kind of service. When the dumpster is blazing, you don't run towards the bloody thing, you flee as fast as you possibly can!!
Quote

I cannot even conceived of the schmucks that would pay for this kind of service. When the dumpster is blazing, you don't run towards the bloody thing, you flee as fast as you possibly can!!

The night is cold, the fire is warm. It's common sense, really.

October 31st, 2019, 21:55
I hope they keep on supporting this. 76 has been such a dumpsterfire they might as well go all the way and try to find as many ways as possible to screw it up. The game itself, the fake nylon bags, plastic rum bottles, scummy microtransactions, moldy helmets that could even kill you, etc, etc..we may never see a game like this, in generations.
Like someone that realizes he's already driven off the cliff, too late to slow down, To hell with it, I'm hitting gas pedal, here we go…wheeeee!
Quote

November 5th, 2019, 07:56
After a five month hiatus due to various reasons this news makes my day a little brighter. Just release another Elder Scrolls or Fallout already. Stop funding games no one wants.
--
"Opinions are like assholes. Everybody's got one and everybody thinks everybody else's stinks."
Quote

November 6th, 2019, 19:32
While I think a subscription is perfectly ok for this game, considering the amount of content they've delivered for free - I think putting the private servers behind a paywall is a major misstep.

Usually, I don't take the obnoxious and ignorant bile thrown and Bethsoft seriously - but, in this case, they do have a point.

With that said, I think Fallout 76 is a fantastic game - and I expect to be playing it for a very long time. I already have more than a hundred hours in it, and I doubt I've seen more than 10% of the content.

The size and variety of the world they've created is simply unmatched. Also, while the lore is more like that of games like System Shock 2 - it's definitely better than anything else I've seen from Bethsoft.

It's genuinely great and mature for the most part.
Quote

November 6th, 2019, 21:02
So what should the subscription offer for it to be okay from your point of view? Just as it is, minus the private servers?
Quote

So what should the subscription offer for it to be okay from your point of view? Just as it is, minus the private servers?

Well, as long as it's just convenience and the coins - that's pretty standard for games like this.

ESO, for instance, is nearly identical - and that's probably what they were aiming for.

With the ESO subscription, you get a bunch of coins each month - and you also get the crafting bag for crafting materials.

But you don't really need it.

However, unlike ESO, Fallout 76 has had several DLC-sized updates added for free, including entirely new playmodes and raids.

Stuff that's not usually given to people for free.

In fact, I think Fallout 76 has had the most generous content delivery I think I've seen in any live service game.

That is, until this private server crap.

The reason I have a problem with charging people for private server access, is that they originally promised it without any kind of mention of it being a paid service.

To me, that's a flat-out broken promise, unless I missed something.

Not that private servers are particularly important to me, but still.

Also, I expected private LOCAL servers, though they never actually said that would be possible, AFAIK.
Quote