Movies/TV to watch during Corona

The movie even mentioned Corona (as a town I think) which was a spooky coincidence and the main villain was done in by viruses.

What movies/tv will you be watching during the Corona pandemic?
Quote

March 24th, 2020, 00:44
I refuse watching anything that has viral outbreak or something similar. Well… Except Kingdom season 2, but that's basically a must, not a choice.

Yesterday watched El Hoyo.
Unique and mustwatch for everyone tired of mainstream junk - about a distopian prison of a sort.
Very good, just don't expect a masterpiece.
--
Toka Koka
Quote

March 24th, 2020, 00:58
I had much the same thought the other day whilst contemplating the history of viral "outbreak" films.

Just before the pandemic fully broke out, I was reading "I Am Legend" and the irony felt quite darkly palpable. Thus, "The Omega Man" and "Last Man on Earth" definitely come to mind.
--
Diddledy high,
Diddledy low,
Come brave blood sheep,
You've a goodly way to go.
- Brilhasti Ap Tarj
Quote

March 24th, 2020, 01:15
https://en.wikipedia.org/wiki/ReGenesis
This was a good show in its time. I would recommend it but not sure where you can watch it nowadays.

The series, which ran for four seasons, revolves around the scientists of NorBAC ("North American Biotechnology Advisory Commission"), a fictional organization with a lab based in Toronto. The organization investigates problems of a scientific nature, such as bio-terrorism, mysterious diseases or radical changes in environment throughout Canada, the United States, and Mexico. NorBAC is headed by David Sandström (played by Peter Outerbridge), the chief scientist and molecular biologist. Through this character the show often addresses topical social, political and ethical issues related to the science at hand.
Quote

https://en.wikipedia.org/wiki/ReGenesis
This was a good show in its time. I would recommend it but not sure where you can watch it nowadays.

Previously a few platforms had it, but currently I believe it's available only on amazon:
https://www.amazon.com/gp/video/deta…ason_select_s1
--
Toka Koka
Quote

March 24th, 2020, 02:19
The first one I thought of was Outbreak (1995) with Dustin Hoffman as the frustrated hero trying to alert the world the problem that everyone ignores until it's too late.

And that's going to be the problem with all these kind of films, they'll all follow the usual 70s disaster movie clichés and themes: The ignored expert, the dumb people, the useless politicians etc etc. You'll guess the entire plot before you've even seen them kinda thing.

Outbreak was pretty good though, I remember going to see that one at the cinema and was suitably entertained, even while slightly eye rolling at the clichés. 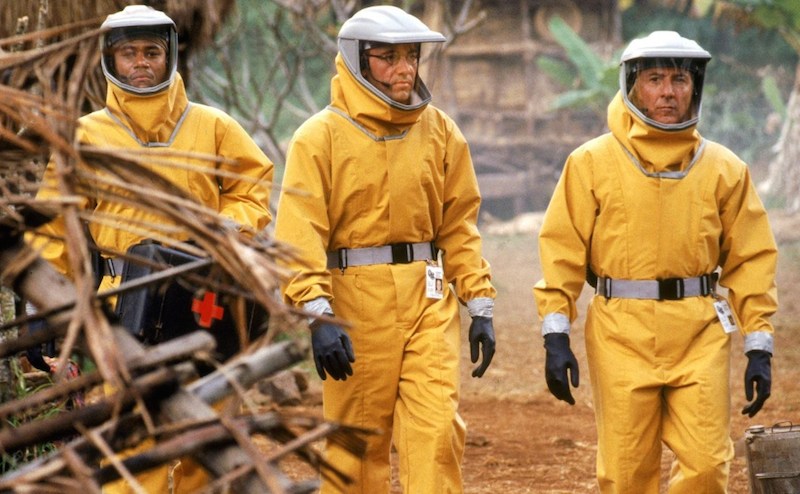 March 24th, 2020, 22:09
We watched Contagion today, from 2011. Pretty realistic. Lots of parallels to Corona.
--
"Mystery is important. To know everything, to know the whole truth, is dull. There is no magic in that. Magic is not knowing, magic is wondering about what and how and where." ~ Cortez, from The Longest Journey
Quote

March 26th, 2020, 03:57
Probably NOT "The Shining." (Unless you've never seen it, in which case you'll need to watch it to understand why people keep crooking their finger and yelling 'red room.')
--

The ignored expert, the dumb people, the useless politicians etc etc. You'll guess the entire plot before you've even seen them kinda thing.

Definitely too close to reality …

March 27th, 2020, 22:15
That dude makes the most complete and interesting documentary videos about Dr Who (old and new).
Part 10 just aired:

That dude makes videos about DnD lore. Pretty good, but his voice is annoying:

That dude is a delicious troll:

loading…
--
The delightful and ever novel pleasure of a useless occupation.
Last edited by Winterfart; March 27th, 2020 at 22:27.
Quote

March 28th, 2020, 07:13
"The Last Ship" (available on Amazon) is really good. At least, the first season is, the realism of the show, and the actors playing the navy officers all seem very believable. I have to admit the second season isn't nearly as good. And I haven't watched later seasons, but the first season is really amazing, if looking for a pandemic type tv series.

Here is the plot: After a global viral pandemic wipes out over 80% of the world's population, the crew (consisting of 218 people) of a lone unaffected U.S. Navy destroyer, which was on a mission in the pacific ocean when the outbreak struck, and so was unaffected and saved from the pandemic. Now the captain and crew must try to find a cure, stop the virus, and save humanity.

A recent movie that I was wanting to see for a long time (and that generated a lot of controversy) is "The Hunt". Ok, so what happened is the movie finally was released recently after much controversy surrounding it, and then the coronavirus shut down the theaters.

The reason for the controversy, I'll briefly explain, because I got the movie tonight.

The opening 5 minutes shows a person texting with 6 other people, and they are all super rich elite types. They are talking smack about the current president, and then one says - "At least we have The Hunt coming up, can't wait to slaughter some deplorables". Then in reply, another texter says, "We said we would not discuss the hunt when texting!" Anyway, that is the setup, and from that you can get the drift why the movie drew controversy. (its a horror film)

So, the movie now has come to "direct demand" video. And guess what they are trying to charge for a rental? $20 for a rental! And that is a solid price, no matter where you look - Amazon, Apple, Google Play, Redbox - are all the same price (hmmmmm) Is that ridiculous and a type of gouging from Hollywood, or what? I would have gladly payed the $3.99 or $4.99 normal price for a rental to watch this movie, by the way. But 20 bucks is just insane.

This isn't the only movie they are doing this with either. There are other new movies that they are saying this is an "exclusive rental" because it is straight from the theaters. To my mind, even if I was a millionaire (and I'm not - far from it) I would never pay $20 for a friggin' movie one night rental! So, I was lucky enough to find a good copy of it, let's say from an "underground" internet place. Thus ends my not-so-brief movie quest story.

March 28th, 2020, 12:33
I've been wanting to revisit this series for a while, and began it before it all went to hell. But somehow the final seasons are a fit to what is happening in the world. I'm talking about Millennium. I'm a few episodes into the final season.
--

March 30th, 2020, 18:34
Millennium is a darn fine show. See, these are the kinds of shows I'll rewatch these days rather than the current drek that's available, and laughing passes for any sort of entertainment.
Quote

March 30th, 2020, 19:40
I would recommend Dark on Netflix. Also liked Better than Us. Also liked Colony a lot. For those that haven't seen them, there are a few to keep you busy for a while!
Quote

If you do want a pandemic-related theme, there's always Counterpart.
Quote

March 30th, 2020, 23:49
Dr Strangelove!!! While not about a pandemic, included lots of stupidity, misinformation and great quotes - ”…no fighting in the war room!”
Quote