March 14th, 2020, 18:41
Mountain Dew has always been an especially nasty beverage to me, the smell of it alone is gag-worthy. Would I put it in my mouth…..never! And reading the above post about the lump of plastic residue doesn't surprise me at all.
Quote

March 14th, 2020, 20:28
You ever see what's left behind if you leave any piece of food out for months? The only thing I can think of that would still be edible are some VERY salted meats.

A quick note: putting any other sort of paper down the toilet is NOT GOOD. Toilet paper is designed to break up when it gets wet. Facial tissues, not so much. Paper towels, exactly the opposite. What the Hades you're supposed to do instead, I have no idea, but there it is.
--

I understand people hoarding food, i did some of that myself. Why risk going out when the shit will be at its peak in the next few weeks?

When breaking their schedule, people have put themselves at risk by meeting unusual concentrations of customers at the supermarket. They could have avoided it by simply postponing the hoarding act by one day, the way supply lines work, just coming the next day would have ensured full stockage.

Besides, it is the internet era and online shopping is an opportunity. Drive services to deliver food at home were also raided up to the point traffic crashed servers.

People hoarded not because they think they would risk something going out in a few weeks. They hoarded because they anticipated food shortage. They see disturbances to grow big enough to hinder food distribution.
--
Backlog:0
Quote

March 15th, 2020, 21:18
The Washington Post has published some nicely illustrated simulations, to show how different approaches towards quarantine affect the spread.

March 15th, 2020, 22:21
Here, other things are spreading currently : Satire pictures around noodles and toilet paper …
--
"Any intelligent fool can make things bigger, more complex, and more violent. It takes a touch of genius and a lot of courage to move in the opposite direction." (E.F.Schumacher, Economist, Source)
Quote

Here, other things are spreading currently : Satire pictures around noodles and toilet paper

There have been some pretty funny memes flying around.
Quote 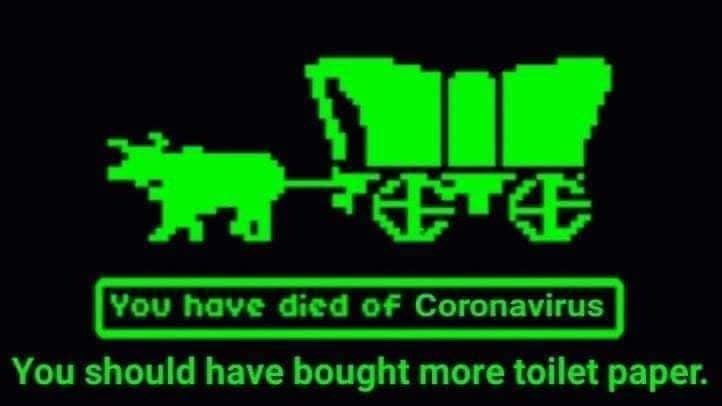 Well here in the Boston area its ugly to say the least. My "place of work" is waiting until Wednesday to move to a 50% WFH posture. I just told all my staff to go to 100% effective immediately. Lets see if they fire me.

Best of luck! I guess that's whats called "Civil disobedience" - Do the right thing even though you are not supposed to.

I wasn't expecting it to be so bad. Luckily I have enough food at home for a few weeks, but if this persists, I may need to clean my bum with a towel

I wasn't expecting it to be so bad. Luckily I have enough food at home for a few weeks, but if this persists, I may need to clean my bum with a towel

No worries, I will send you some by mail. Hopefully it won't get lost, like the masks the Belgian government bought in Turkey. 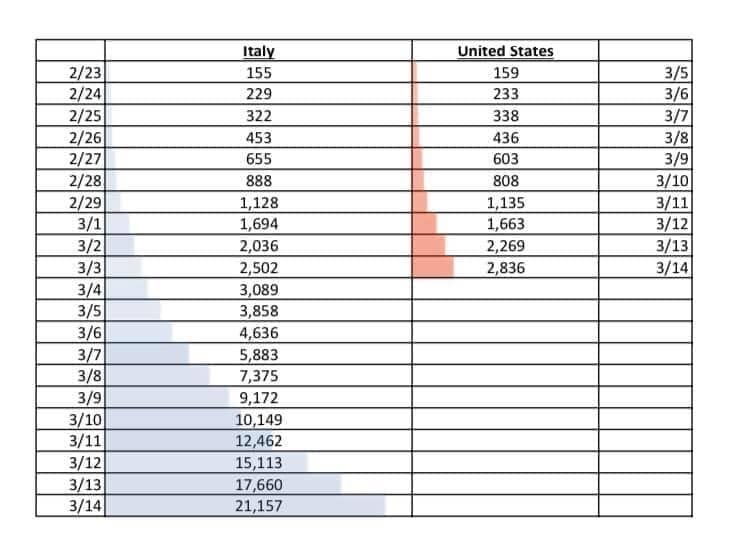 March 16th, 2020, 09:39
The numbers for the US are likely much, much worse than shown here.
In Italy it all began as a (more or less) local outbreak and relatively small areas were quarantined and tested. While the US has a couple of hotspots, it's much more spreadout and tests were not done on the same scale.
Meaning the density of the italien spread is much higher, while with the same numbers in the US likely mean a much higher number of infected, untested cases which at the same time are more spread out. Meaning the US Numbers might (if testing allows it, remember that someone who is not tested, cannot be represented in statistics) be increasing by a much higher rate in the future.
Ofc the US also has 5 times the inhabitants and therefore most likely more resources to fight it.
--
Doing >Let's Plays< and >Reviews< in German. Latest Review: Pathway
Mostly playing Indie titles, including Strategy, Tactics and Roleplaying-Games.
And here is a list of all games I ever played.
Quote

March 16th, 2020, 10:23
The US also has the advantage of being one of the later countries to be hit by the virus. Things would be a lot worse here if we didn't get to see what happened in Iran, Italy, etc, first.

Because of that, preventive measures are being set in motion at an accelerated rate.
Quote

The Washington Post has published some nicely illustrated simulations, to show how different approaches towards quarantine affect the spread.

I saw that one as well. In my view the third option has to be the most effective one? Since if you use the last one you end up with a population still extremely susceptible to new outbreaks.
Quote

even talk from ""experts"" about spreading the virus as much as possible to reach immunity (which would take around 17 years, from what i have read)

17 years? That seems unlikely, unless they are talking about every single, last person becoming infected, which is indeed an asymptotic target, but not really what is relevant.

But currently, case numbers increase by a factor of 5 every ten days. The problem is not that it would take too long, but on the contrary, that, at that pace, it would take ~3 months for 2/3 of the population to become either sick, immune, or dead.

But, yeah, closing borders makes little sense now if it's meant just to contain the spread. No point erecting firewalls if the conflagration is already burning on both sides.
Quote

March 16th, 2020, 12:31
Our gov declared a 'national emrgency' last night - all inbound arrivals from badly affected countried suspended, banned gatherings of 100+, etc etc. My university had its first covid case revealed yesterday (but they won't tell us exactly which dept/group - staff though, not a student). They suspended all teaching today - 21,000+ students have been ordered home. Staff have also been asked to work from hom where possible…I'm goingto venture forth later to see what I can scrounge after the locusts have swept through the shops

People are going crazy. And all hand santizer etc has been bought up… very frustrating. They really need to enforce limits on purchases since people can't moderate their behaviour. So far we have 54 reported cases, and no fatalties…but I am asure this is a large underestimate.
Quote

I'm not entirely sure why people are picking on this particular flu epidemic specifically as it's not exactly a plague-level epidemic and the casualty rate is extremely low by apocalyptic standards. Apart from the issue of too little capacity in hospitals and morgues, there's not really much that is threatening about this flu from a big-picture perspective.

It's sort-of a slightly worse version of the usual annual flu epidemics that we all live with all year every year. About 50,000 people a year die from normal flus, usually the old and sick. This one looks like it would do more than that, which makes it a bit more threatening, but, essentially, it's just another flu.

Nope. Let's do some numbers.

And if these 20 million need hospitalization at more or less the same time… well, tough luck, there will be no spare beds and respirators, so mortality will shoot up towards 10%.

The difference between 75.000 and 6 - 20 million is substantial enough not to trivialize this as a "bad flu". The population of RPGWatch, which has been established to consist mostly of octogenarians, has reason to be concerned. So hunker down at home and finally get to reading "A la recherche du temps perdu". Stretch the progression of the epidemic so hospitals operate within their limits and can give everyone good care to keep mortality down, and give researchers time to come up with a vaccine.
Quote

I'm not entirely sure why people are picking on this particular flu epidemic specifically as it's not exactly a plague-level epidemic and the casualty rate is extremely low by apocalyptic standards.

Its easy, its virusism and it needs to be stopped. Discrimination based on strain is disgusting and we need to put an end to it.

Seriously though its not a mystery as to why they are picking on it.

Its a new strain and therefore an unknown. Letting an unknown spread unchecked could be catastrophic. Early results say it spreads 2-3 times the rate of regular flu and has a slightly higher mortality rate. Theres currently no vaccine.

Being proactive until you know what your dealing with isnt a bad idea.
Quote