The dialogue in ATOM was too much. Everyone goes on and on, and the input from the player is minimal. You're just working your way through a checklist, often the same checklist, over and over. It's like if you when you played Morrowind you asked every NPC about every keyword. There's also a uniformity to how everyone talks that I'm not a fan of. Some of it is funny, and it's certainly colorful and vivid writing, so it's not all bad. But my eyes glazed over within minutes each time I tried to play it.

As I understand it, some of the dialogue gets lost in translation. There are supposedly a lot of jokes and cultural references that non-Russian gamers won't get.

I'm not saying the writing would be great if we were Russian, but it probably does factor in at least to some degree.

As far as being verbose, yeah, I agree it can get old pretty fast when so many NPCs have that much dialogue.
Quote

From what I saw in ATOM and Encased, there isn't much difference in the amount of text.

The amount isn't the only thing that matters though. Pacing is very important.

Some games just add tons of text as soon as you meet a character, whilst others open up over time. I think ATOM RPG is everything at once. I think that's also part of why it didn't click for me.
Quote

September 21st, 2021, 09:36
With Encased it will depend on the role of the NPC. Most will give everything at once because they're just "background" NPC (all NPCs respond differently in Encased, there's no generic answer that unimportant NPCs give).

Companions usually give 90% at the start, and after a while they share other thoughts if you gain enough reputation.

Quest-related dialogues depend on the quest state, of course. It's not always perfect, some lines come back sometimes (not a big deal, it's just that they're not greyed out, happens in WotR too).

There's more of it in the prologue, maybe. The idea is giving the player a sense of the world, so it's on purpose. And there are periods of quiet too, it's alternating with quests and exploration.

I'm not sure Encased, ATOM or Pathfinder will be fully appreciated if the player doesn't like reading some amount of text, those games follow the classic genre in that regard.
Quote


Game quality drops off a cliff after Act 1; the new locations that open up are big, empty, and lifeless

@Redglyph, Is the game buggy or worth plunging into already ?

I'm slow - well, or rather, I restarted late, so I'm only past the prologue. But I had played the whole EA (which includes prologue & act 1).

I haven't seen any annoying bug so far, and even in the last EA, those I found were mostly cosmetic or have been fixed. Some were apparently reported, but nothing out of the ordinary; they had much more time to polish the game than in the case of Pathfinder(s), and the game isn't as complex, so it's nothing like it.

I'd say you can safely jump in.

September 22nd, 2021, 16:54
I have a mild grumble about quest information. I get a quest, say “take the pie to Qayto” Ages later I find the pie but can I remember where Qayto is? Course I can’t. Lots of characters spread over quite a few areas, so it would be helpful to have more information/reminders in the quest log, perhaps hovering over the name to remind of location. I dislike googling a game so early on, it can be spoilery. I don’t want to keep notes everytime I speak to an NPC who may be in need of a pie.

I have encountered one bug where I can’t progress a side quest. It’s mentioned a fair bit on steam forum so I expect it will be addressed soon.

There may be an issue with the difficulty levels for those who prefer their challenges painful. I’m playing on normal and finding it comfortable. If I’m thinking of upping to a harder difficulty then it may be way too undemanding for some of you.

Found the random encounters while crossing the map a bit too frequent but other than that I’m really enjoying Encased. I have more of a Wasteland feel than an Atom feel from it. I’m intrigued by the story. I’m already planning my second play through with a different and more focussed build, perhaps better behaviour towards companions who I appear to have offended.
Quote

I have a mild grumble about quest information. I get a quest, say âtake the pie to Qaytoâ Ages later I find the pie but can I remember where Qayto is? Course I canât. Lots of characters spread over quite a few areas, so it would be helpful to have more information/reminders in the quest log, perhaps hovering over the name to remind of location. I dislike googling a game so early on, it can be spoilery. I donât want to keep notes everytime I speak to an NPC who may be in need of a pie.

Yes, Encased doesn't hold our hand for sure. I had this problem too, and also to find back companions sometimes.

Found the random encounters while crossing the map a bit too frequent but other than that Iâm really enjoying Encased. I have more of a Wasteland feel than an Atom feel from it.

I like the fact we can avoid those encounters. But in the late EA, at some point the locations got attacked repeatedly, which was very annoying because it forced a combat and implied a lot of participants (so very long). I don't know if they kept that in the release version.
Quote

Thanks. Can you post your impressions of act 2 when you reach there?

I'm quite biased though, so make sure to get other opinions as well

I'm quite biased though, so make sure to get other opinions as well

It's the kind of game I am likely to enjoy, but I don't want it to be too front loaded.
Quote

Some rooms have forbidden access, and trying to get there and out with a companion is just a hassle (that part was better handled in the EA IMO).

There's also a good chance that one of the usual companions at this stage (Crump, Sparrow) will do something stupid or leave you because they don't like the quests you take part in.

For the Playing Detective quest, there's a problem. If you're stuck:

Spoiler
- if you haven't got the clue about two NPCs meeting in the showers, ask around, visit other floors, someone will come to you eventually;
- don't feel forced to do everything that this someone tells you to do

- save often;
- once you got the clue, go to the Residential Area's floor (you should know where)
- more spoilers if you can't trigger the next part

Spoiler
- don't try to hide from Matthew and Dahlia, they'll start a fake conversation even if you're in stealth and they're not supposed to see you
- talk to them but not about the escape (maybe it's optional), then go in the laundry room to get into the ventilation area
- in stealth mode, go around in the ventilation area up to eavesdrop on the 2 NPCs from the other side of the ventilation grid
- normally they should start talking about their plan, but now it's broken and they don't, click on Dahlia as if you wanted to talk to her (in stealth mode), and it will trigger the conversation.

About the morgue in the Laboratory area:
- save first!

Spoiler
- If you enter the morgue by lockpicking the door, the guard will quickly come and remain at the door, looking around for the culprit. She magically knows it's you or any companion that comes with you, so don't let a companion outside or you're in trouble.

- There's a way to get out, but if you have companions they must be with you because there's a change of area. If they're waiting out of reach, you cannot use this way out, and you cannot reach them anymore to send them home and be alone.

I hope they improve those two parts of Magellan. It's not a big deal, but it's not entirely intuitive and may force you to reload.
Last edited by Redglyph; September 26th, 2021 at 16:23.
Quote

In Magellan, I think it's best not to have any companion.

Some rooms have forbidden access, and trying to get there and out with a companion is just a hassle (that part was better handled in the EA IMO).

Can't you just order them to stay somewhere while you explore those particular rooms?
Quote

Can't you just order them to stay somewhere while you explore those particular rooms?

Yes, you can, the UI now mimicks Larian's chain feature. You can detach the companions, make them go somewhere and wait.

But there's another problem, it's in the spoiler tag for the morgue.

It's easy to send them home, so no big deal, they accept to be companions again later anyway. Save before doing something risky, if you realize you're stuck because of a companion or losing reputation points, retry after sending him/her away.

In one case at Magellan, Crump began to beat up an NPC because of what he did, so I couldn't talk with the NPC and the quest failed.

In one case at Magellan, Crump began to beat up an NPC because of what he did, so I couldn't talk with the NPC and the quest failed.

That's actually pretty cool though. More games should have instances where a companion NPC acts on their own like that. It's not unheard of, but you don't see it often enough.
Quote

October 1st, 2021, 19:31
Got the custom portraits working great. Lobo fits right in - shot I took in FO4 and resized to fit the specs for Encased. 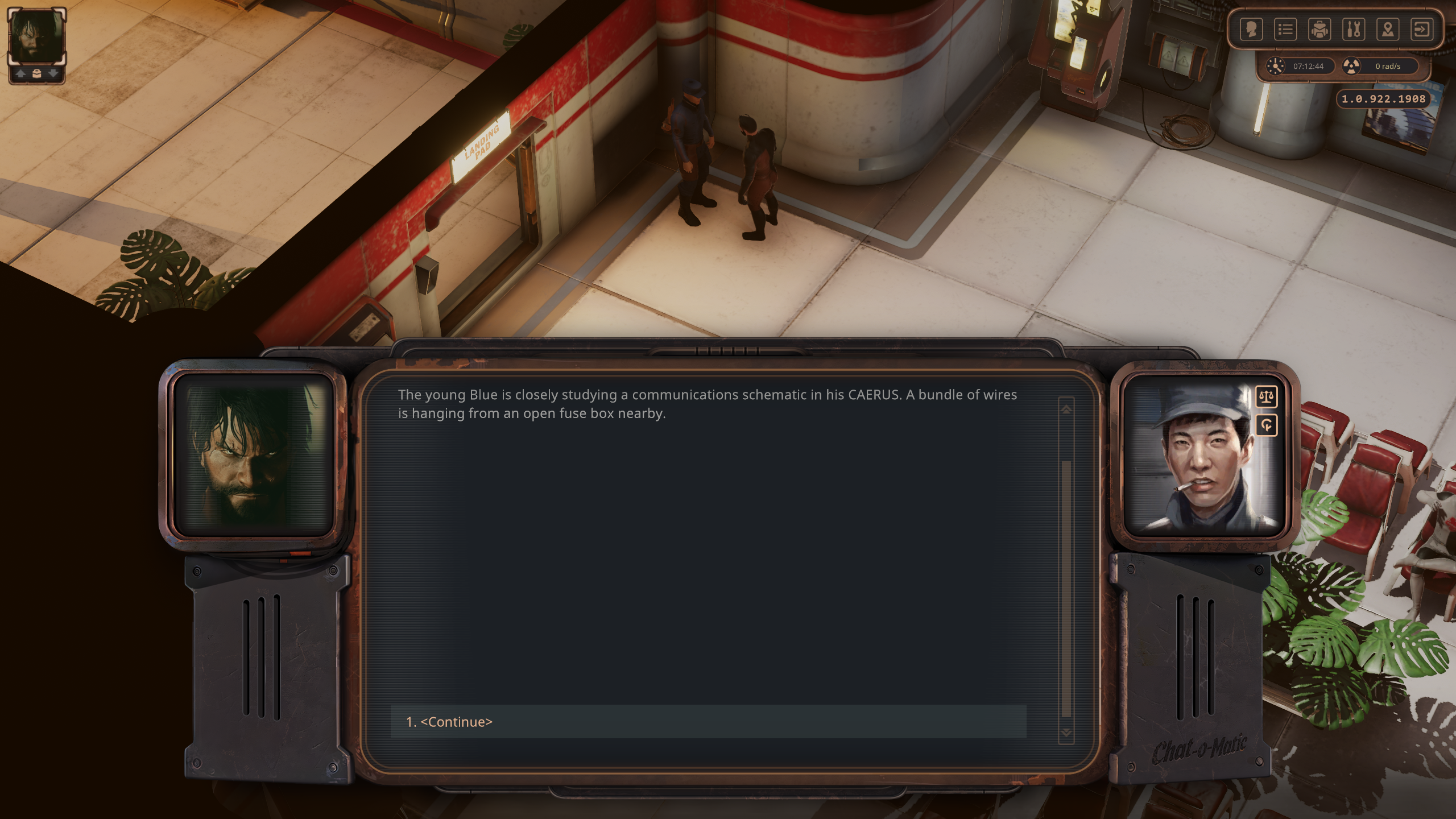