October 10th, 2019, 22:36
Didn't know that the game Snake could be finished. Slightly sped up video. Oddly satisfying and a bit stressful to watch.


loading…
--
"Mystery is important. To know everything, to know the whole truth, is dull. There is no magic in that. Magic is not knowing, magic is wondering about what and how and where." ~ Cortez, from The Longest Journey
Quote

You don't need to know. Perhaps you should:
https://www.bbc.com/future/article/2…ork-went-viral

What you definetly don't need to know is why kids were droneized by Nintendo Gameboy instead. I mean, let's keep optimism.
--
Toka Koka
Quote

October 15th, 2019, 13:39
The other day plenty of gaming media talked about a guy who spent $62.000 on Runescape microtransactions.
A bit of fuss over it from random comments produced nothing in the end. Except maybe a few haters gonna hate, whales gonna whale meaningless statements of the same weight as if someone just said "immersive sim".

What you don't need to know is that it was not the richest microtransactions junkie and Runescape is a kitten compared to some other milk'em products falsely advertised as videogames:
https://kotaku.com/someone-spent-ove…a-t-1839040151


Someone Spent Over $150,000 In Microtransactions On A Transformers Game

Another, similar place linked to via this article :
https://en.wikipedia.org/wiki/Couto_Misto

You don't need to know. Perhaps you should:
https://www.bbc.com/future/article/2…ork-went-viral

I vaguely remember having seen & felt such a ball as a very small child … Thanks for bringing this memory up again …
--
"Any intelligent fool can make things bigger, more complex, and more violent. It takes a touch of genius and a lot of courage to move in the opposite direction." (E.F.Schumacher, Economist, Source)
Quote

October 20th, 2019, 22:03
There has been a recent challenge - offisial one ! - with a prize to prove it doesn't exist.
The prize could not be taken, all attempts were unsuccessful. 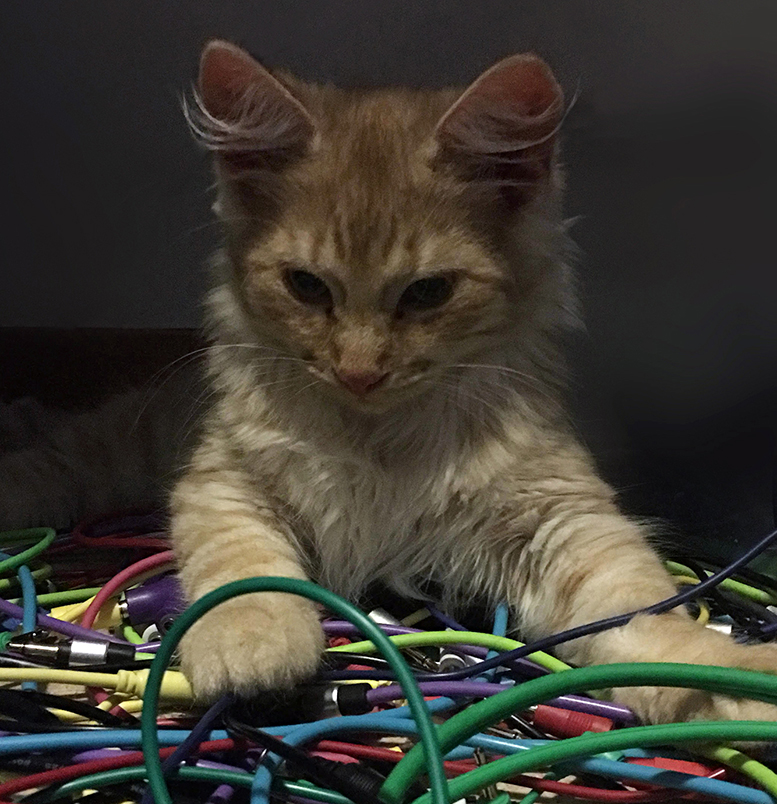 my first cat, only had birds (parrots) before so a few new things to learn. This is a very vocal cat. He's headbutting me and licks my nose, i guess it basically means he accepts me as his slave.. Loves to snuggle, absolutely hates the vacuum cleaner.
--
Latest creations: Fallout NV: A Wasteland in Bloom / Fallout NV: WFO v3.5
Quote

October 24th, 2019, 16:19
That kitty looks like he'll be an adorable alpha predator when he's fully grown!! May he live long and prosper.

…only had birds (parrots) before so a few new things to learn.

Like cats and parrots quite often doesn't go well together.


This is a very vocal cat. He's headbutting me and licks my nose, i guess it basically means he accepts me as his slave.. Loves to snuggle, absolutely hates the vacuum cleaner.

pibbur who found the cat of the vurt to be cute.
Quote

Lovely name as well. Never give a cat name with an ‘s’ or ‘sh’ sound.

Aww, so cute. Lovely! Great picture too. He is touching my heart. And vocal cats are the best, if you ask me. I envy you, vurt.

Lovely name as well. Never give a cat name with an ‘s’ or ‘sh’ sound.

How did you get it?

Thanks (Loke thanks as well, im sure). I bought him from someone who couldn't keep him because their other cat didn't stand another cat in their home.

October 24th, 2019, 21:58
When I got a cat, a stray picked up in France, I bought several books about how cats communicate and why they do the things they do. I learned that cats greet each other closing their eyes, which seems to say ‘I’m no danger to you’. So I started to close my eyes for a second or two when I looked at her, and my black devil responded by closing her eyes for a moment.

And whenever I meet a cat in the neighborhood I do exactly the same and often get the same response.

My cat and I developed a special bond. She purred in a unique way to greet me when I came home, nobody else got that pur. (My boyfriend was welcomed with a sort of high toned grumble.) When I whistled in a specific way, she came. I did not train her, it developed naturally. Every time I had a treat in the evening I whistled in a certain way, not realising what I was doing. Until she came when I whistled that tune in the morning. I guess she thought it was her name.

Anyway, I highly recommend learning more about cats. (You can even teach them to return toys that you have thrown away.) It intensifies your relationship with the remarkable creature. Don’t listen to fools that say cats attach themselves to a house - they are wrong. Cats get attached to people. You’ll notice that when living alone, sharing your life with one cat.

My grief was long and painful when she died. That is the downside. My beautiful baby was gone for good.
--
1. It's not what you say - it is the way you say it.
Lovely 2 minute video: 'Change your words, change your world'

October 24th, 2019, 23:17
Yes, the slowblink is indeed a kind of greeting it seems, or just a general "i trust you". I've went through quite a few videos on cat behavior over the years. Took me ages to finally get one, been afraid to get a new pet after losing my African Gray parrot years ago now. I'm glad i went with a cat instead of another parrot.

They're fun and very smart animals. I try to put myself in the mindset of a child to figure out new games to play, or how to amuse him. Yesterday i carried him around and opened all closets to show him whats inside (exciting stuff…). Today i put him in the bathtub so he could play with a bit of water (watching toys floating around by themselves seemed to entertain).
--
Latest creations: Fallout NV: A Wasteland in Bloom / Fallout NV: WFO v3.5
Quote

Yes, they are fun and smart. Mine looked through the mirror at me, it recognized the sound of my car (‘ah, she has returned home’ and jumped at the windowsill to watch me) and we went on moth hunting together on summer evenings, where I pointed at a direction a moth was flying in the air, and the cat understood it had to look in the direction of where I was pointing and not at the tip of my pointing finger. She immediately went after it and ate it.

October 25th, 2019, 09:53
That was a smart cat! Yeah i've pointed too but he doesn't get it, yet.
It's incredible to see how easy they find stuff to get comfy in, and sometimes they are surprising places that you didn't think of. Here's one of them, he'll be too big soon for it though.. 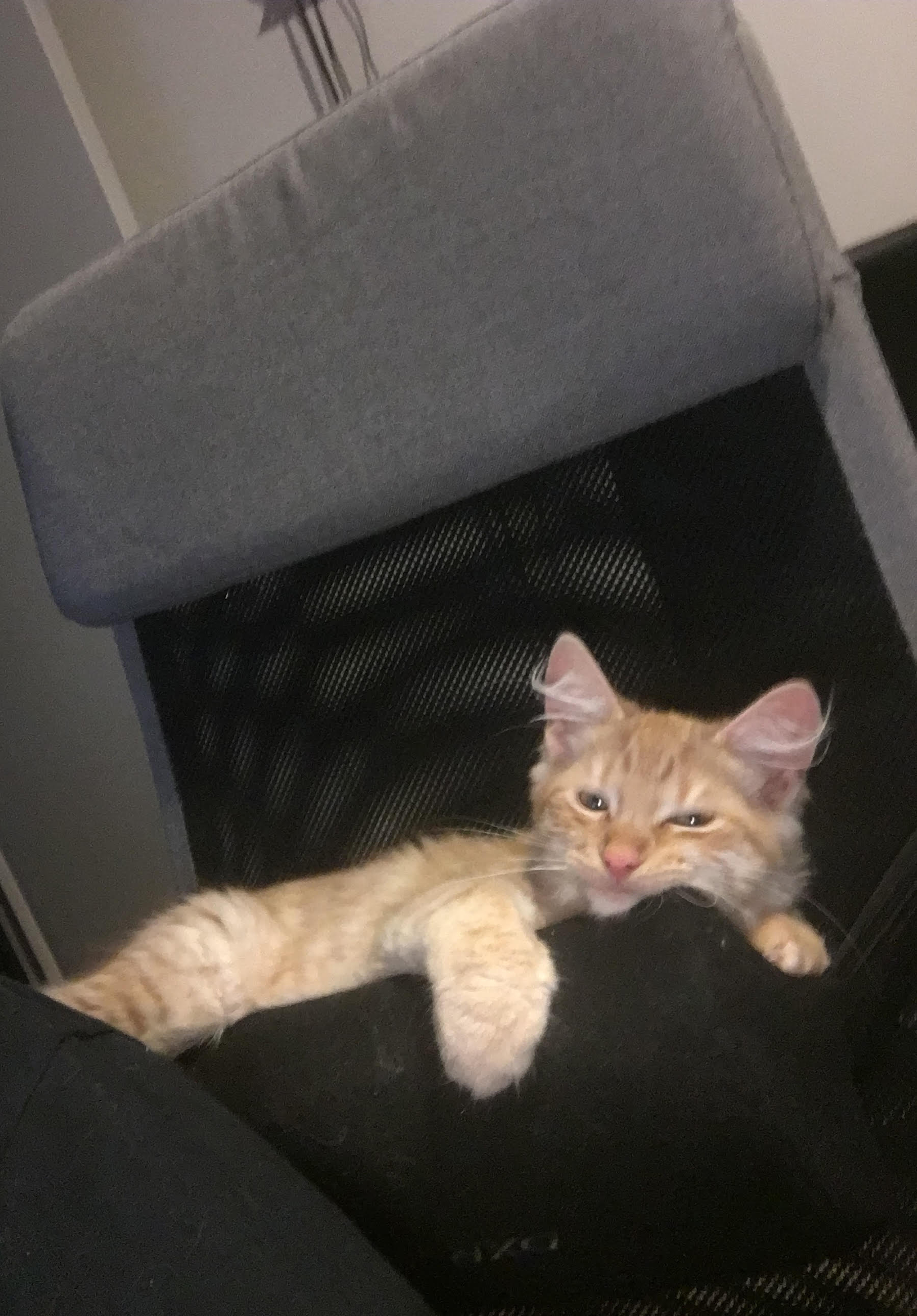 October 25th, 2019, 10:56
Haha, yes, they lie down in the strangest places.
They like cardboard boxes too. The smaller the better it seems.

I used to have some standing in all sort of corners and one under the dinner table. Ones with small side holes that I cut for her and ones that were open at the upper side, without the flaps. Because she liked to pull small pieces of cardboard from the box with her teeth and spill it around.

The pointing finger took some time. But having something edible at the direction I was pointing to did the trick after a while. You could try a treat, and placing it further away from your finger each day or so. Or perhaps, if that does not work after a while, pointing and then moving your pointed finger towards the treat?

It sounds you already have a great time with your ‘hartedief’, ditt hjärts tjuv? (literally: thief of your heart).

They're more fun and loving than i thought they would be. I have friends with cats (one of them have 6..), but it's one thing seeing them occasionally like that and having one yourself, whole other thing to see all their peculiar quirks and so forth.
--
Latest creations: Fallout NV: A Wasteland in Bloom / Fallout NV: WFO v3.5
Quote

It's a (synthetic) Bismuth (Bi) crystal. Now, Bistmuth, with atom number 83, was for long thought to be the last element with a non radioactive isotope. The next element in the periodic system is number 84, Polonium which is a nasty little bugger (killer of Litvinenko), followed by the extremely nasty, which I've already told you about, Astatine (85). And the rest of them are all radioactive as well, with no stable isotopes.

Nice to know that I now have a radioactive toy to play with. There are of course other radioactive substances in the household, Americium in the smoke detectors, and there probably also is some Radon sieving up from the ground. But this one is the only one I can hold in my hand.

I'm not particularly worried. Due to it's half life, it's radioactivity is almost undetectable (for all practical purposes it's stable). Besides it's an alpha-emitter. And alpha-particles have a very short range - they don't penetrate the most external, dead part of my skin. In short, I'm not afraid of dying (from my Bi crystal).

a pibbur who like everybody else don't have (and don't want) (and haven't seen) an astatine crystal.

PS2. A mixture of Bistmuth has been used for treating Helicobacter pylori infections, the most important cause of ulcers and other dyspeptic conditions of the stomach. I've used it once - it tastes horribly. I still want to kill the guys who made it (perhaps not)

. DS.
--
Over the mountain watching the watcher
Quote

February 1st, 2020, 16:49
I would not eat that chunk, though. Even non-radioactive substances can be dangerous (toxic).

I would not eat that chunk, though. Even non-radioactive substances can be dangerous (toxic).

Fortunately, Bismuth is one of the very few heavy metals that isn't toxic. But I probably would destroy my teeth if I started to chew it.

Now, I said that Bismuth is an emitter of alpha-particles (Helium nuclei), and that alpha particles don't penetrate the skin. It's therefor usually quite safe to hold a strict alpha-emitter in your hands. However, getting it inside your body is another matter, then it can be very toxic. Not Bismuth due to it's extremely low intensity radiation, but many other substances are lethal. Such was the case with the Russian Alexander Litinenko who was poisoned by Polonium-210, another alpha-emitter. The agents bringing it were in no danger, the stuff was contained in a bottle. But for Litvinenko, who was given it in a cup of tea, it was lethal. As little as 1 microgram of Polonium-210 is acutely deadly if ingested or inhaled.

BTW, Polonium-210 is a natural contaminant of tobacco. 1 g of tobacco contains 0.000000000077 micrograms of Polonium, far less than the acute deadly dose, but over time, it is a contributing factor for tobacco related lung cancer.

alpha pibbur
--
Over the mountain watching the watcher
Last edited by a pibbur; February 3rd, 2020 at 19:51.
Quote