We're back with another dev blog to take a closer look at what the upcoming 'Blazing Deserts' DLC for Battle Brothers brings to the table. As we've established last time, the world map will be expanded with new lands to the south. Even though the focus of the DLC will be on fighting human opponents, those new southern deserts wouldn't feel quite complete without their own bestiary loosely based on middle-eastern mythology. The Ifrit is one such beast that you'll soon be able to face, so let's delve in!

The south is a harsh land, and the southern city states do not tolerate dissent. Criminals, expended slaves and bothersome political rivals all may find themselves expelled to the blazing deserts without a drop of water. There, so folklore claims, the sun shall burn away their impurities and distill their spirits to their very essence. Forged by fire and tempered with heat, every once in a while, an Ifrit is born. A cursed creature, if folklore is to be believed, a spirit saved by basking beneath the gilded shine of the eternal sun, if the priests speak true, and a strange and alien creature in any case. Made not of flesh and blood, but of rock and stone, of shifting sands, it roams endlessly where the blistering heat of the sun has baked the land into endless barren wastes that stretch between the horizons. 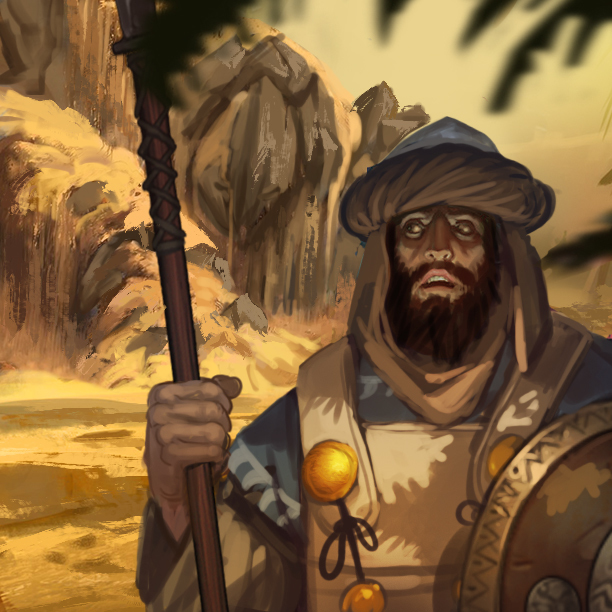 In battle, the Ifrit comes in three sizes of living rock. The larger, the more dangerous. Unique among all creatures in Battle Brothers, several smaller Ifrits can assemble into one larger one, and several larger ones can assemble into one gargantuan. These shuffling behemoths are slow, but they can strike powerful blows in melee, and they can also rip out parts of themselves and fling them at enemies. Not only is getting a living rock thrown at you a dangerous ranged attack, but whether the attack hits or misses, the rock thrown is itself a small Ifrit that can attack in melee once it has crashed at its destination - which may well be at your backline. Worse yet, if there's three or more smaller Ifrits being thrown around, they can then assemble again into a larger one elsewhere!

If your men manage to destroy an Ifrit, it will crumble into two smaller parts with one part lost, until it is down to the smallest size where destroying it will end its existence permanently. If there happens to be a third part around of a fitting size, however, the Ifrit can again assemble itself to a rocky monstrosity, so fighting it is as much about dealing damage as it is about smart positioning and denying access to tiles. While large Ifrits are too heavy to be pushed around, smaller ones can be both pulled and knocked back to your advantage.

The Ifrit is a powerful opponent best taken on by experienced companies towards the later parts of a campaign. There's a new contract dealing with Ifrits, but there's also incentive to challenge them on your own terms, and perhaps even earlier in a campaign. Ifrits drop rare and expensive ingredients which can be used to craft some of the powerful alchemical contraptions that are coming with the 'Blazing Deserts' DLC - including one shown in this wallpaper.

I don't like "milking".
--
The delightful and ever novel pleasure of a useless occupation.
Quote

February 9th, 2020, 15:13
Didn't get enough of mine. I have the supporter edition for each expansion and gifted the game to a bunch of people. Would rather support a studio I know I love playing their game than throwing my money in the wind for Kickstarters.

The Ifrit looks like it could be a pain to battle. Just a giant rock? This will be the first bad thing I say about BB. They could have done a better job on the Ifrit graphics.
--
"From knowledge springs Power, just as weakness stems from Ignorance."
Quote

February 9th, 2020, 15:20
Even when they milking it?
--
The delightful and ever novel pleasure of a useless occupation.
Quote

Even when they milking it?

I don't believe they are milking it. The community was super pissed when they said they were done with the development for BB. They have given the community what they want. More Battle Brothers. Each of the expansions have been fantastic. Almost universal praise. If they do a cosmetic expansion then I will be with you.
--
"From knowledge springs Power, just as weakness stems from Ignorance."
Quote

February 9th, 2020, 15:26
It reminds me a lot of Heroes of Might and Magic III. The expansions made the base game that much better. Wasn't the HD remake a few years ago just the base HoMM III? That did not go over well because the expansions were fantastic.
--
"From knowledge springs Power, just as weakness stems from Ignorance."
Quote

I don't believe they are milking it.

Fair enough. I believe they do.

The community was super pissed when they said they were done with the development for BB.

I actually was pretty happy when they stated there wouldn't make any DLCs and start working on a new game immediatly.

Their DLC are fine, with just enough content, but I'd prefer one big expansion than plenty of those little DLCs. For me it's milking.

Anyways, can't wait to see their next actual game, with hope they stay in the tactical genre, because they nailed it the first time.
--
The delightful and ever novel pleasure of a useless occupation.
Quote

February 9th, 2020, 17:28
It seems like an odd choice of content to add for this particular game, but I'll certainly incorporate it into my next play-through. I've not played at all with any of the new content so it's likely going to feel like an entirely different game when I do get around to finally replaying this one.
Quote

First time i played it i didn't put in the effort required and i quit after an hour or so. However, when i returned to it and decided to give it a proper go i was sooooo hooked. It's a fantastic game. I still have some issues with some gameplay aspects but overall it's amazing!

Here's hoping they will make a second!
Quote

February 9th, 2020, 20:06
This game is a prime example of the old adage that you get back exactly what you invest. Follow that rule, and this game is an utter joy.
Quote

Even when they milking it?

At one point quite a while ago, the developer announced that they were ending active development on Battle Brothers and moving on to their next game, and people LOST THEIR SHIT. "How dare you leave this game unfinished", they burbled, never mind that the game was in a finished state.

So no, they're not "milking" anything. They're meeting a demand with reasonably priced additional content.
Quote

--
Everyone thinks i am crazy, but i am just adjusting to my environment.
Quote

So no, they're not "milking" anything. They're meeting a demand with reasonably priced additional content.

Milking could be understood as making the most of a demand, squeezing it as possible.

Yeah Loved the base game, but that studio got enough of my money.

The only reason they came up with this Sandbox expansion is they spent all your money already on their new game in which their characters have FCKN legs!
Quote

February 10th, 2020, 17:52
Legs are always welcomed.
--
The delightful and ever novel pleasure of a useless occupation.
Quote

The only reason they came up with this Sandbox expansion is they spent all your money already on their new game in which their characters have FCKN legs!

--
Everyone thinks i am crazy, but i am just adjusting to my environment.
Quote

Milking could be understood as making the most of a demand, squeezing it as possible.