Got a brand new computer for Christmas, so finally spun up that one game I had been waiting to play until my system could handle it: The Witcher 3.

I feel like I only just started it, and yet according to GOG Galaxy I'm already 70+ hours in, and I feel like I only barely scratched the surface. So that's a good thing, right? And yet, I can't help but feel slightly disappointed after all the hype. It's a pretty game (though not as awesomesauce as I was expecting), but the exploration (or lack thereof) and lack of meaningful loot (yuck for level-gated gear) waters the entire experience down. I disabled the markers on the map, but still, now I find myself running from peasant to strumpet to ensure I don't miss a quest.

Don't get me wrong, it's a good game, but it could be better; as an "action-RPG", it definitely doesn't dethrone Gothic 2 imho.
As for positives so far, story and atmosphere are top notch, and I am loving the quests. Then again, I am a sucker for this sort of setting: gritty, morally grey with lots of political intrigue.

I've only just made it to Novigrad, so I am curious to see how the story develops. Speaking of Novigrad, damn, as far as a city in a game goes, it's probably one of the best and most realistic I've seen.

Do yourself a favor and try to play it more organically. What I mean is, don't make it a point to talk to every single non-essential NPC for fear of missing a sidequest. You'll just end up overleveled and likely feeling burned-out before you reach the end. Just go where the story takes you and do the side content that seems the most interesting.

It's very different from something like Gothic 2, and you'll end up disappointed if you try to play it the same way.
Quote

March 28th, 2020, 16:13
After getting through the new NWN module (it was OK), I restarted Star Wars Jedi Knight (Dark Forces 2) on a new Microsoft Surface I picked up recently. I was happy too get it running well … had to fiddle more than a bit. Absolutely LOVE this game - the size, scale and scope of these levels are exhausting!
--
-- Mike
Quote

March 29th, 2020, 15:49
I've rolled several new alts on EQ two, Kaladim server and so far having a lot of fun with some new mates. Great to replay some of this content before the game went all wonky with ridiculous mechanics that make no sense, if you enjoyed EQ two back when it was fun this is a great server to play on.
Quote

March 29th, 2020, 16:58
Started a new game of Satisfactory, an exploration and factory-builder stress test for your cpu. Enjoying it greatly. 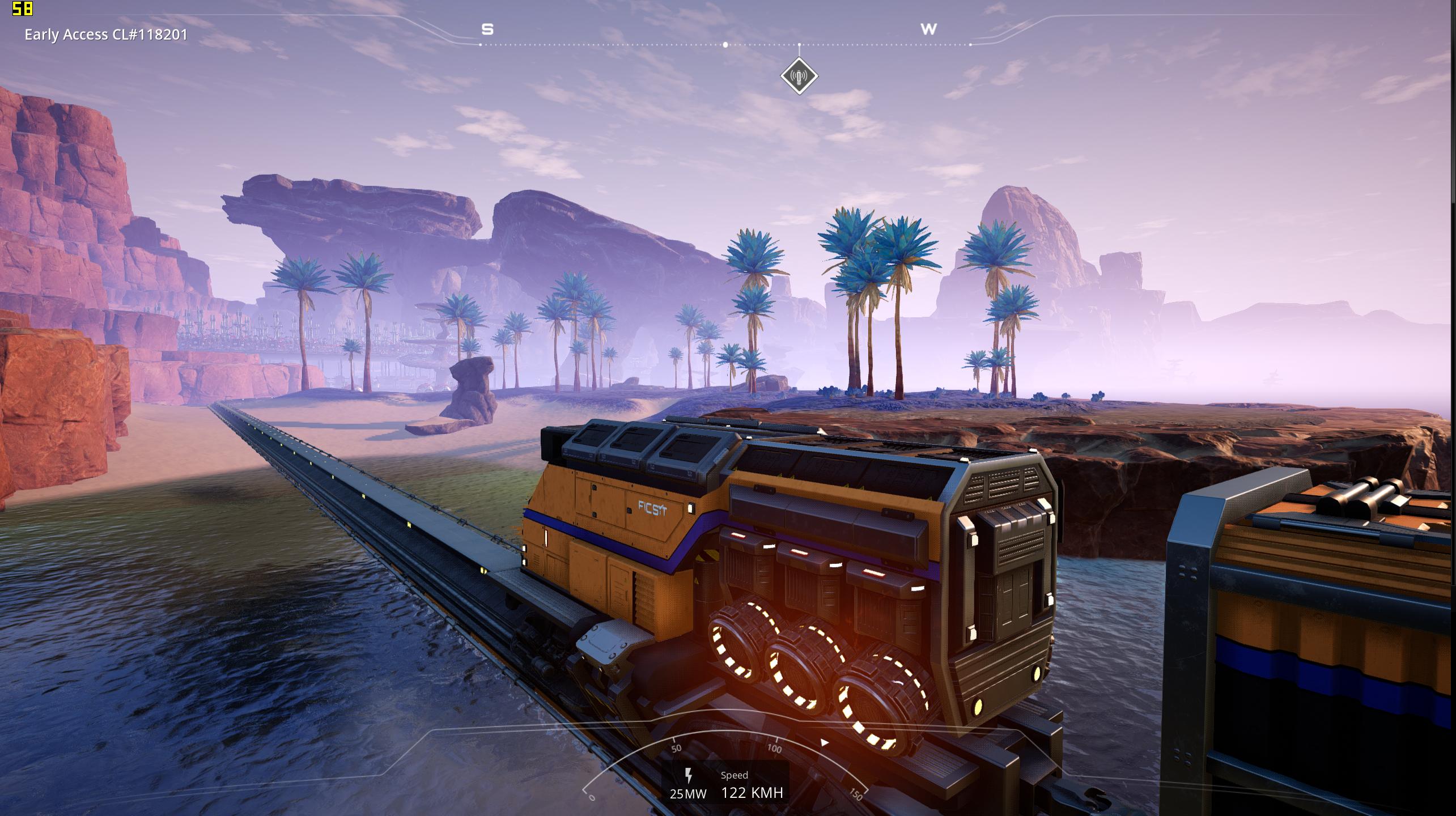 March 30th, 2020, 15:20
Despite this whole virus craze, I do not have much of a free time.
Nevertheless, home office has its own pro's, e.g I can play for short coffee break bursts anytime without embarrassment. Hence my list is:

Desktop Dungeons: honestly, I was a fan of this gem back then, and I'm a fan now. This beauty is THE coffee break RPG.
Baldur's Gate 1 (replay): ooohhh, when replaying, I find the BG1 better than BG2. Must be those "empty" wilderness areas Go figure.
Technomancer: having utterly disappointed by Greedfall's setting, I'm about to try out another underdog Spiders game. This one seems to have a more interesting world to soak in.
Moons of Madness: another "Lovecrafian" game, without any actual Lovecraft. Developers, take note: Lovecraft does not equal tentacles and gore!
Quote

April 1st, 2020, 22:48
Still on BG (just started Shadow of Amn) but I needed a little turn-based action to balance all that real time messiness, so I fired up Mordheim: City of the Damned.

That game is an asshole. It's great but does anything it can to make me suffer.
Devs must be a bit sadistics, especially with their design of story missions…
--
The delightful and ever novel pleasure of a useless occupation.
Quote

April 2nd, 2020, 21:34
Whew … finished Jedi Knight today, and really forgot how sprawling, exhausting and occasionally frustrating those levels were! And because of modern hardware you can no longer use 3D Accelerator even with the old workaround.

Next have to decide between Divine Divinity, Arcanum, or jumping into the Mysteries of the Sith expansion … all of which work great on the Surface Pro 7!
--
-- Mike
Quote

April 3rd, 2020, 00:03
I am playing with Jedi Knight Dark Forces 2 as well, but I think I just can't play anymore - it is just too frustrating. I think I am on mission 12/13 or something, and the level is full of windy towers with obscure buttons and it is just no fun at all.

It is working with hardware acceleration for me using jkgfxmod, although I am still on Windows7 so that might change things.
--
Favourite RPGs of all time: Wizardry 6, Ultima 7/7.2, Fallout2, Planescape Torment, Baldurs Gate 2+TOB, Jagged Alliance 2, Ravenloft: The stone prophet, Gothic 2, Realms of Arkania:Blade of destiny (not the HD version!!) and Secret of the Silver Blades.
Quote

Baldur's Gate 1 (replay): ooohhh, when replaying, I find the BG1 better than BG2. Must be those "empty" wilderness areas Go figure.

I'm in the same boat; I find BG1 to be a more enjoyable game than 2. I think I prefer the smaller scope of the story myself; it's not deciding the fate of divine beings, but a single city. Though I also think that the UI wasn't quite that well suited for the mass of high-level AD&D abilities the party could accumulate, and simply worked better for a low level party instead as well. I've played through BG1 twice as much as BG2, which is saying something. I've beaten BG2 with practically every single class as the Bhaalspawn, as well as every most multi-class options.

I just beat Spyro the Dragon 1 Remake, after two weeks of being stuck on the end boss. It's a fun, colorful platformer, and I liked the original, so the remake worked well with me. Though some of the jumps in that last stage were painfully precise, which is what killed me the most. For the most part, it's easy enough though, unless you try to 100% everything, which I never do.

Still plugging away at Tales of Berseria and Legends of Amberland, with the occasional turn at dying in Doom (2016). I've never been good at first person shooters, and playing on the PS4 is far far far worse than KB&M controls.
--
https://twitter.com/DRGandDerpyCat
https://www.youtube.com/channel/UCSd…kYzGg/featured
Quote

April 6th, 2020, 18:19
I find both BG1 and BG2 to be two conflicting extremes. Like the difference between a quiet walk in the park and running a competitive marathon. Which you prefer will depend what mood one is in.

I find BG1 way too tranquil a game. what some find relaxing I find the equivalent of watching a loading screen for too long. A sense of impatience which manifests in a physical pain in my stomach as I stare at a screen not doing anything while itching to do something.

BG2 on the other hand I find is too much the other way with the non-stop flood of companions and quests quite literally throwing you around all over the place like a paper bag in a gale. A computer game equivalent of role-playing someone with ADHD.

This probably sounds a bit extreme, and it's not a reflection of the whole of both games, just the overall gameplay loop of both. I enjoyed both to about the same degree in terms of the memories, and I'm glad I played both, but neither made it onto my personal all time games because both miss the mark for me, one too low and one too high, but both were worthy experiences of shooting for something.
Quote

April 6th, 2020, 20:00
BG2 had a ton of sidequests but I do miss those wilderness areas you could explore in BG1. BG1 is still my fav, but they're both great games. Also there's that moment when you get your first magical sword +1 and don't have to worry about it breaking in middle of fight.

Inspired by LGR I'm playing Where in USA is Carmen San Diego (the CGA version, not the remade one). Still trying to catch my 1st burglar but I'm getting there

April 6th, 2020, 21:05
I'm replaying Exiled Kingdoms. This is a mobile port that is actually quite a good game and extremely large. You play a warrior, rogue, cleric or wizard and have received an inheritance from an unknown relative. On the way to retrieve said inheritance, you get robbed and have to earn money by solving the problems of the various towns, guilds, and peoples. You do this while you also follow the footsteps of the thief.

Each character has 8 or so unique skills to their class and then some shared skills and then a bunch that can only be unlocked by meeting the right people and helping them out. I'd say there are about 80 quests and you'll level from 1-20ish throughout the game. I generally end up restarting after level 7 or 8 and have played the first sections of the game several times, just trying out different build ideas or even just a different path on the world map.

The developer made enough from his little indie game to port it to pc and that audience made him enough money to make a full-blown pc rpg for his next game: Archaelund (sp?).
--
c-computer, r-role, p-playing, g-game, nut-extreme fan
=crpgnut or just
'nut @crpgnut
Quote

April 7th, 2020, 16:21
Chugging on my fourth character on Everquest two, Kaladim server. Might try to do one more characer if we get a bonus experience week or weekend, as I always like to have a monk in my stable. Gotta be ready for Kunark!
Quote

April 10th, 2020, 22:55
I'm quickly becoming engrossed by X4: Foundations, which is rather brilliant. If you've enjoyed any of the previous X games at all, don't hesitate.
Quote

April 11th, 2020, 04:38
OK, so I ran through Mysteries of the Sith (JK stand=alone expansion), then went between a bunch of stuff before settling on NWN2 (starting with OC). Usually do male Paladin or female Sorcerer … so mixing it up as a female Paladin

Also stil playing D:OS2 as 4 player coop with friends, but they are not really interested in the "RP" aspects, so they just say "where to now?" "Let's kill them all!" etc

April 16th, 2020, 17:25
Kind of burned out on RPG games so playing the latest Terminator game.
Its fun, kind of like Dead Island and the characters and story is good.
No multiplayer is okay by me
The graphics actually look much better then I expected from reading reviews and I'm not playing 4k anyways.
--
The falcon cannot hear the falconer;
Things fall apart; the centre cannot hold;
Mere anarchy is loosed upon the world,
The Second Coming- William Butler Yeats
Quote


Keeper of the Watch

OK, so I ran through Mysteries of the Sith (JK stand=alone expansion), then went between a bunch of stuff before settling on NWN2 (starting with OC). Usually do male Paladin or female Sorcerer … so mixing it up as a female Paladin

Couldn't you have at least done a Sorcerer/Paladin or Male/Female build instead?