There once was a guy who played King's Field 20 years after its first release and thought: "Wow this is really cool! But I wish it had better controls and better combat and was much, much prettier."

I've been developing a free movement dungeon crawler for a bit more than a year now.
It is called Monomyth and was originally planned as a pretty simple King's Field clone, but in my "research" for the project a whole lot of other games also left an impression (such as the original Ultima Underworld, Arx Fatalis, Thief, System Shock, etc). So here we are

Key features:
Development focuses/focused so far on the following aspects:

I'm trying to get the game on Steam Greenlight by the 15th of May (we'll see how that works out). Unfortunately I have to prepone this entire process a little (mostly due to the current legal implications Steam Direct would have). Planned release is Q4 2018 (or 2019 - you know how it is). This year my focus will also be to release an alpha demo for all the good people to test, enjoy and play around with.

I'll use this thread to update you on the development, answer questions and take feedback.

Thanks for reading!
Last edited by RatTower; May 19th, 2017 at 01:07. Reason: added steam greenlight video
Quote

June 28th, 2017, 10:59
I'm currently working on level persistence (e.g. items that have been picked up are actually gone on reloading an area, etc).
I realized I could easily add dropping items from the inventory into the world, where they'd stay indefinitely.

But this only makes sense if there's some kind of inventory management system in place, so here's the question:

Which kind of inventory system do you prefer?
Quote

PS - inventory management - I see the current winner in the poll is a weight free, infinite inventory like Skyrim. I hope you don't go down that route - proper inventory and resource management is part of the fun of dungeon crawlers for me, it forces you to make difficult decisions!

But good luck with it whatever you decide.
Quote

Essentially saving and loading is working nicely. The system is very similar to Dark Souls and/or System Shock:
If you quit the game, you restart again at the same position in the world with all your progress saved. Decisions stick. There's no reloading (i.e. as in Dark Souls)
If you die you restart at the last "save point" with all of your progress saved (i.e. as in Dark Souls & System Shock).

I think that's a good formula for a game that basically extends on what King's Field did (which just had regular save points).

I also implemented inventory controls to drop items into the world.
So now you can collect stuff and then just litter the ground with it if that's what you wanna do.

It's all kept in the save state, so no object is ever lost unless you literally throw it into a lava pit. Still gotta think about that a bit when it comes to important quest/puzzle objects.
I also limited the inventory space. For now you got a slot based inventory with like 14 slots in the beginning and you can extend that by finding better backpacks (which are not yet in the game, but once I did the models for those that takes about 10 minutes to code the way it's currently set up).

I'm wondering whether I should add an extra container interface (so you look into a chest, but it just opens another inventory view, where you pull items from the container into your backpack - this is pretty much the standard system in most RPGs) or if I should add "real" containers (so you actually open a chest in the game world and it really contains the 3d modells of the loot). The latter system is pretty rare. I think Dark Messiah had something like that, but I'm not even sure.
Problem with that system is: You can't lock a halberd into a chest. Same is true for all other bigger objects. Which is realistic I guess, but perhaps not what people might want. Also storing items becomes way more messy if there are no slot based containers.
Quote

Also added a stateful blueprint concept, which basically allows me to save blueprint states in an easy way (stuff like keeping opened doors open after reload).

I wanted to add some lockpicking mechanics, however I created a fountain the player can drink from first.
In the end I want players to be able to draw water from those, revealing whether it is clean (healing stamina and health or mana) or if it's dirty (giving the players debuffs or poisoning them).
Probably gonna do that today.

Hopefully I'll soon find the time to do a full update with screenshots and everything. Anyway here's a fountain sculpture that will sprinkle water in your face. Or breath fire. Not sure yet: Also made a crate with the same functionality for the more shady regions in the game. Anyway, this week I'll really add those lockpicking mechanics. 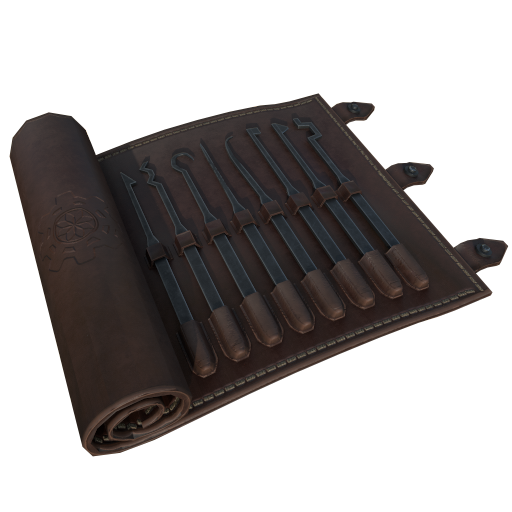 At the very least in the form of a simple dex check. Later possibly with more complex mechanics. We will see whether that makes it into the alpha.
Talking of which, I started designing the first area for that demo.
Quote

I'll definitely be keeping an eye on this.
Quote

August 27th, 2017, 16:04
Not dead by the way.
Currently working on that alpha level and mechanics.
Also started adding gamepad support, for the full King's Field experience.

Talking of King's Field, I saw what Underworld Ascendant did with their logo, and made this for fun:

Kinda like a subtle hint or tribute. No idea if it will make it into the final game. Either way, here's a WIP screenshot of that new area:

September 10th, 2017, 12:29
Some WIP screenshots of the area I'm currently working on (no detail pass yet)
Trying to make good use of some modular assets I made. September 14th, 2017, 10:39
The area I'm currently working on is coming along nicely. Hopefully by the end of the week I'll be able to post another map overview. I want to have about a third of the area done by then, but we'll see. 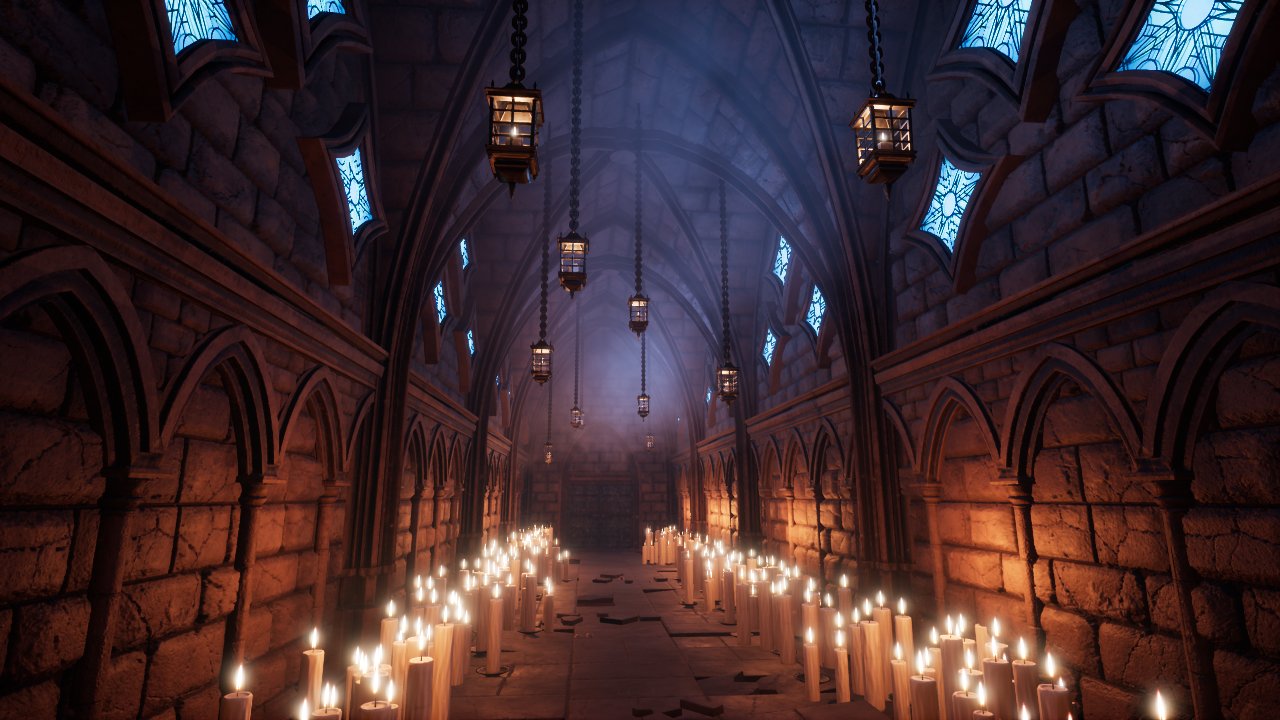 Either way I hope the entire zone will be done by the end of October. After that I'll probably focus on making better animations and polishing the game logic a bit.
Quote 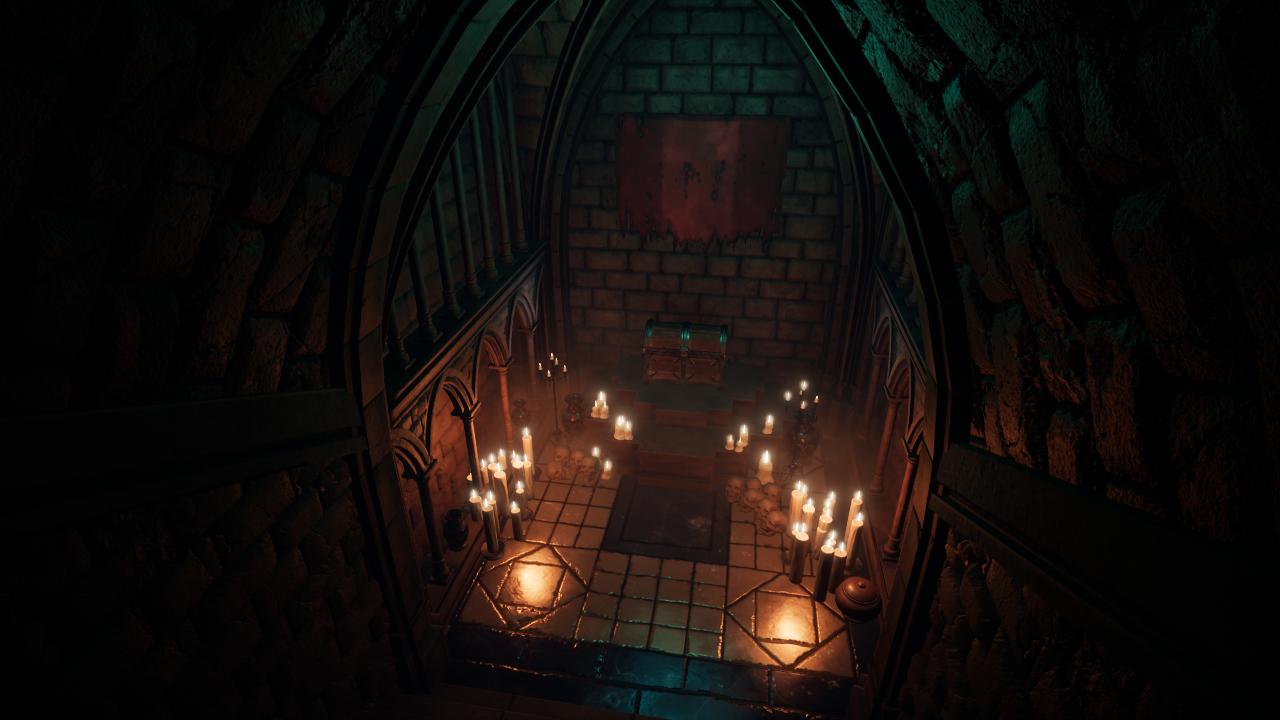 This place isn't up to date with the current development of Monomyth. So let me quickly get you people up to speed. Most of this stuff is hidden behind twitter links, where I normally post updates, sorry for that. Anyway, this is what happened over the last few months:

I started out making a couple of assets. 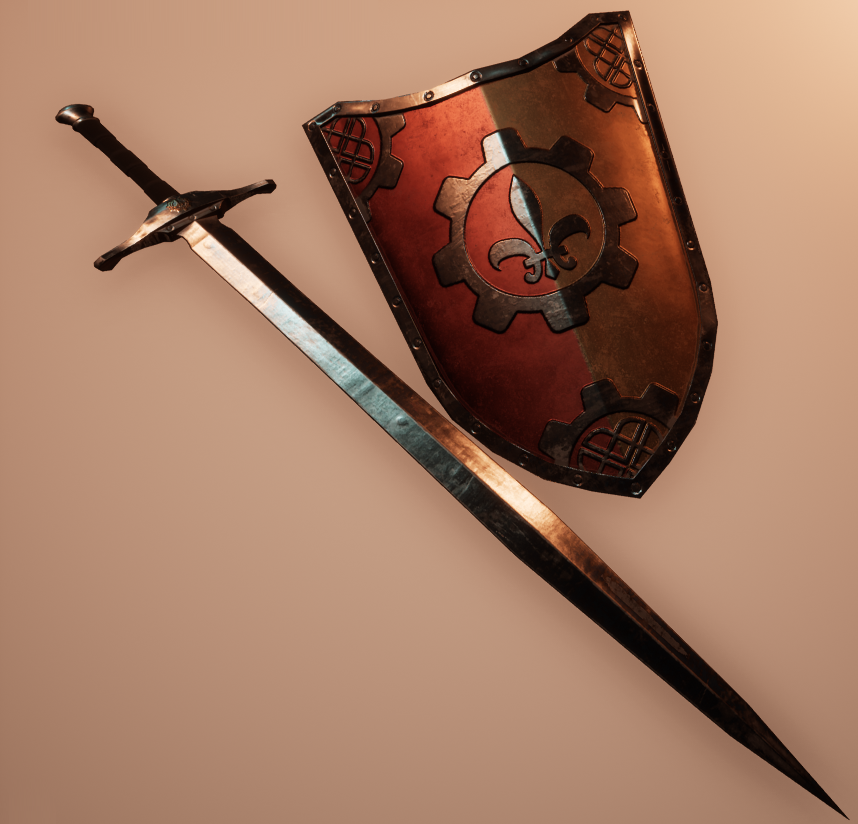 I then worked on character status effects:

I also implemented a system for item combinations. That system will mostly be used for puzzles, but it can be used for crafting as well. For example for baking bread: 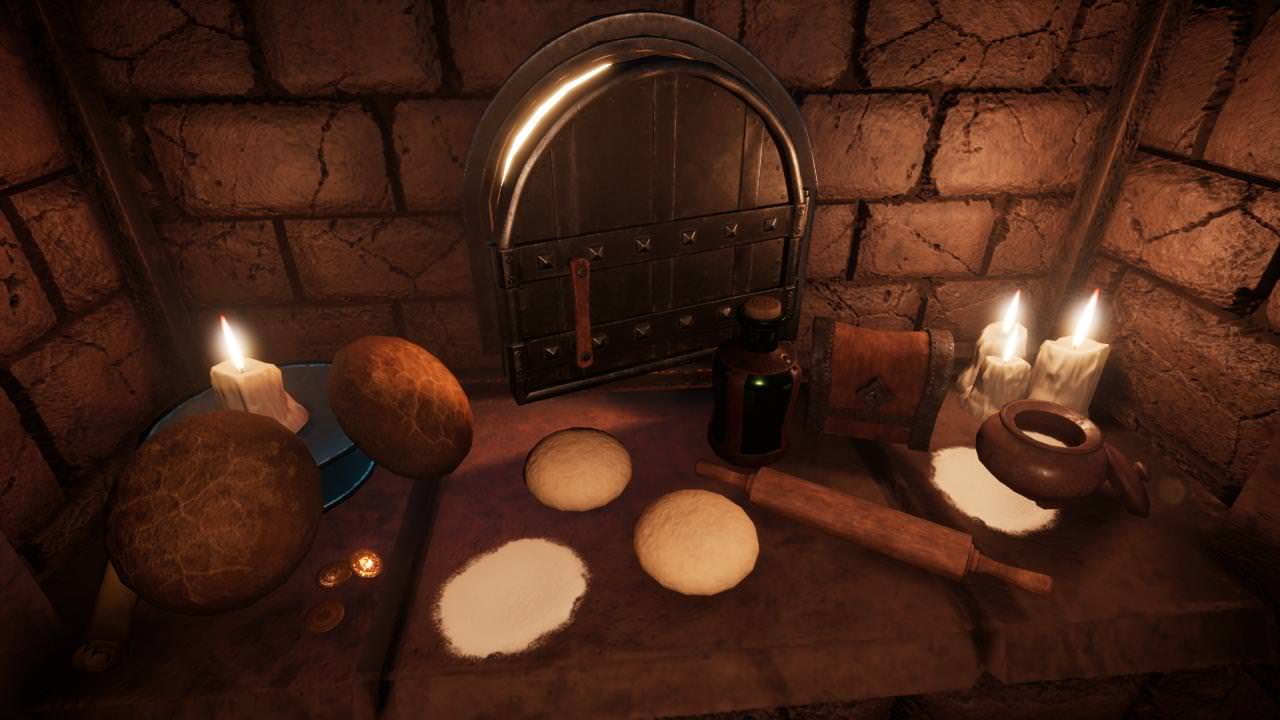 Of course I also made fitting kitchen assets for that: 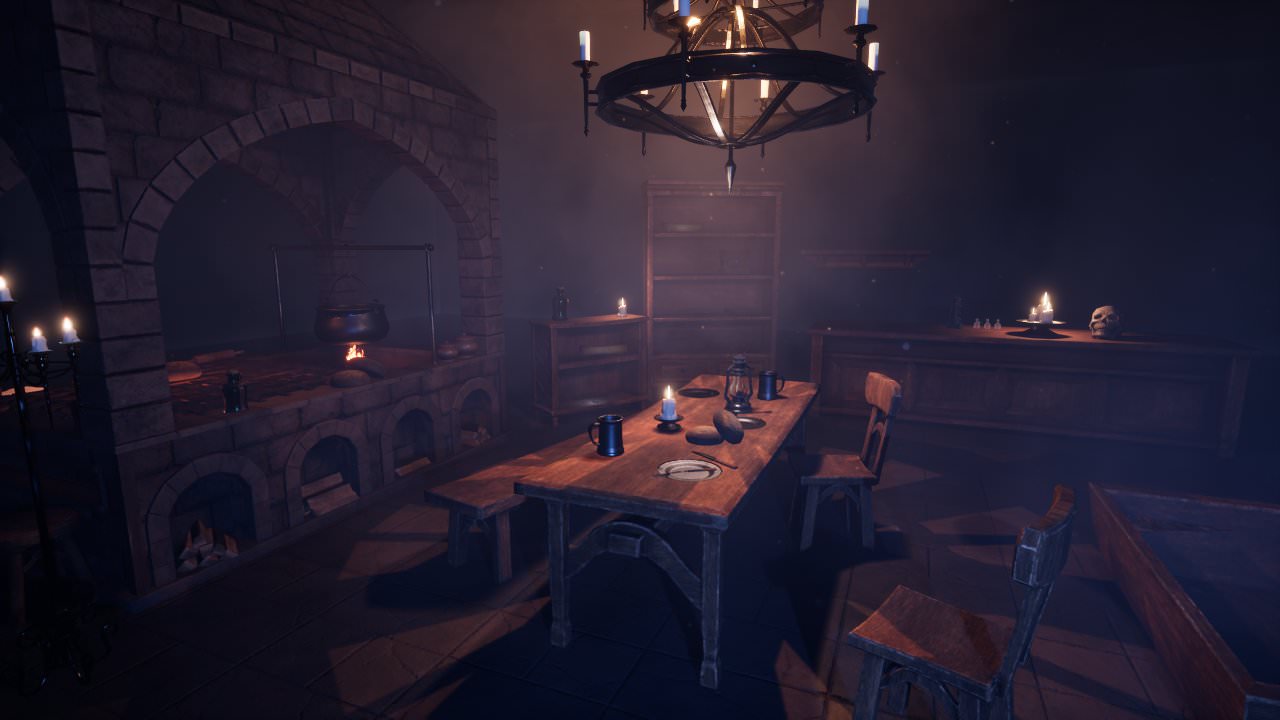 I also made a test level

Carrying and throwing certain objects made it in too:

Then I switched to Unreal 4.18 which really changed development thanks to Unreal's new animation import.

As I said, switching to Unreal 4.18 really changed development. Thanks to the new animation importer i could finally start working on new animations:

As a result I also started making assets for two handed weapons. 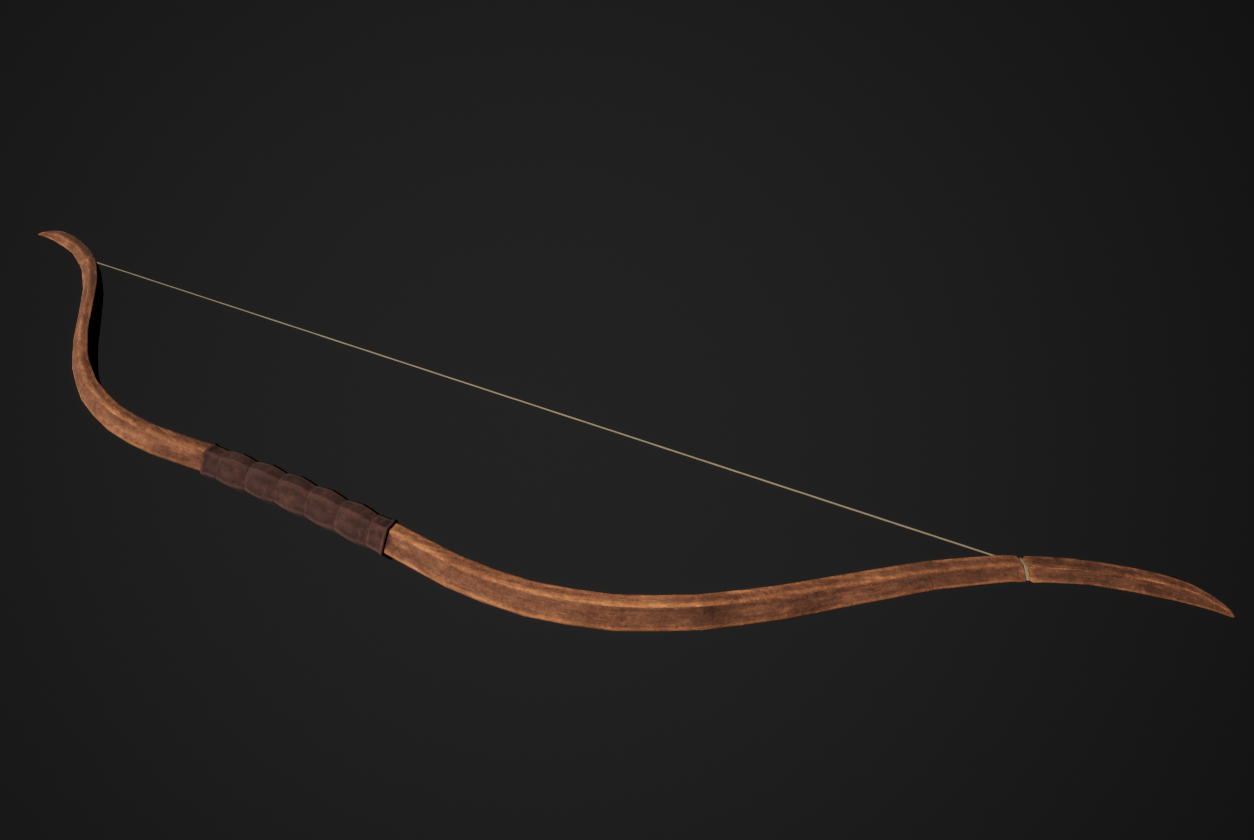 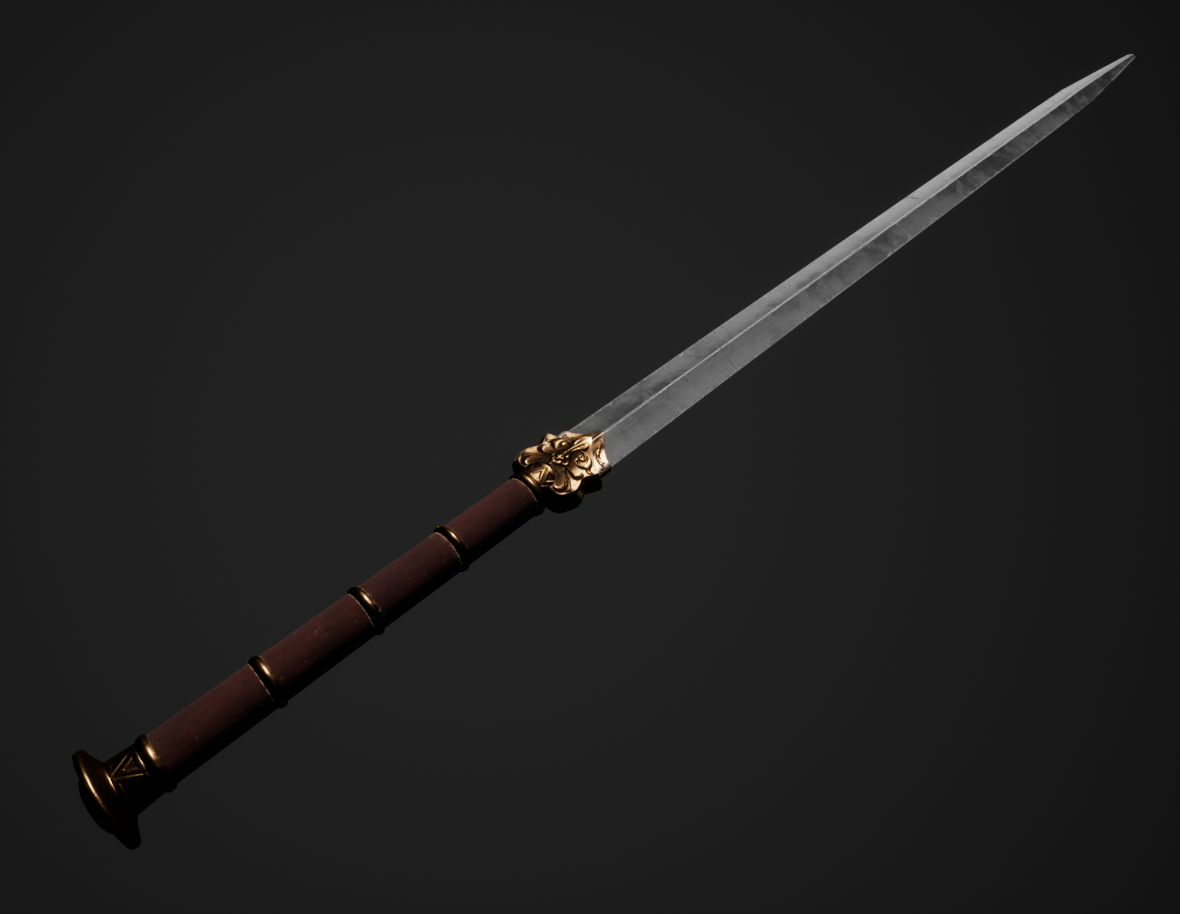 And for outdoor areas as well:

Here and there I also added things to existing systems. For example now you could also cook fish. 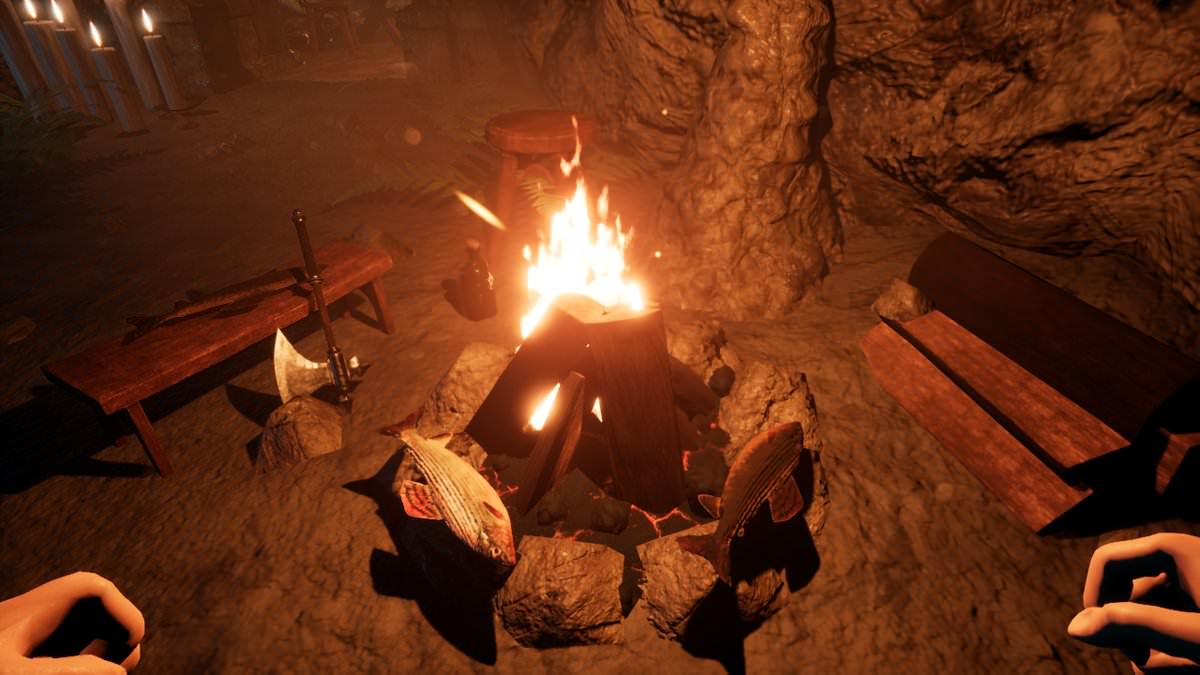 I also polished some scenes, to be roughly what I want visually from this project: 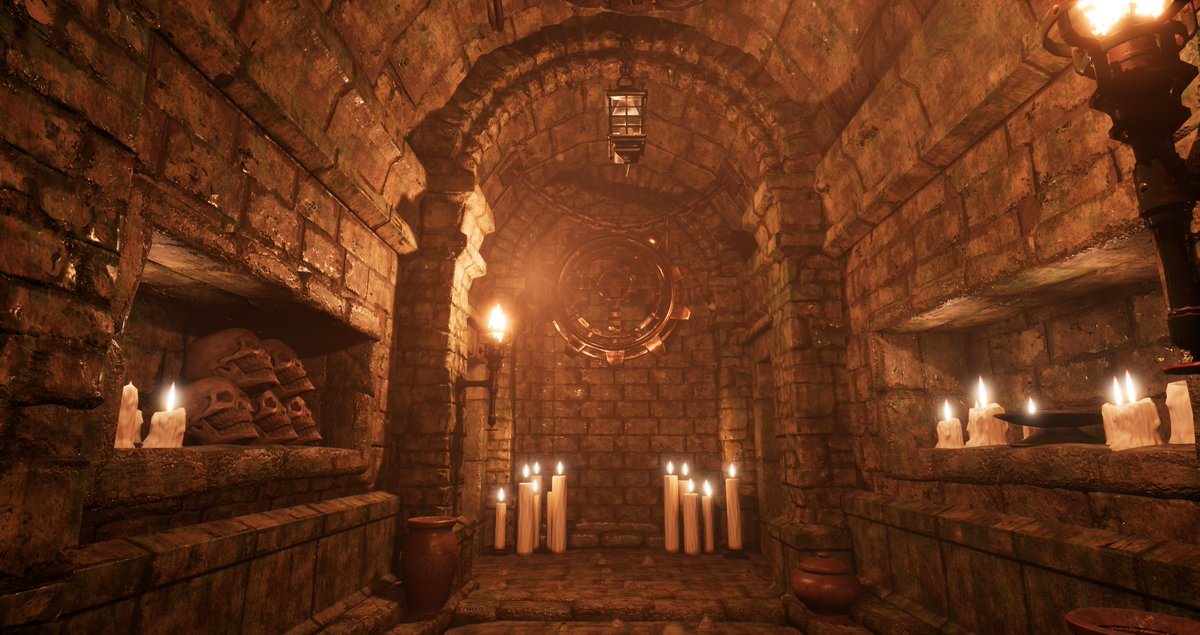 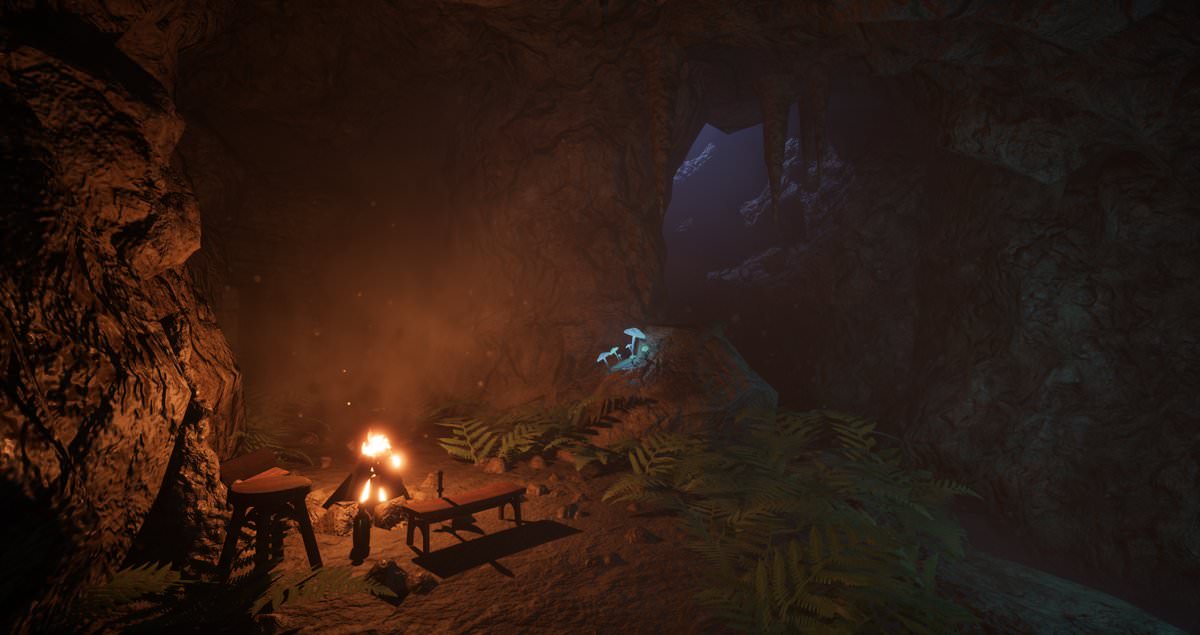 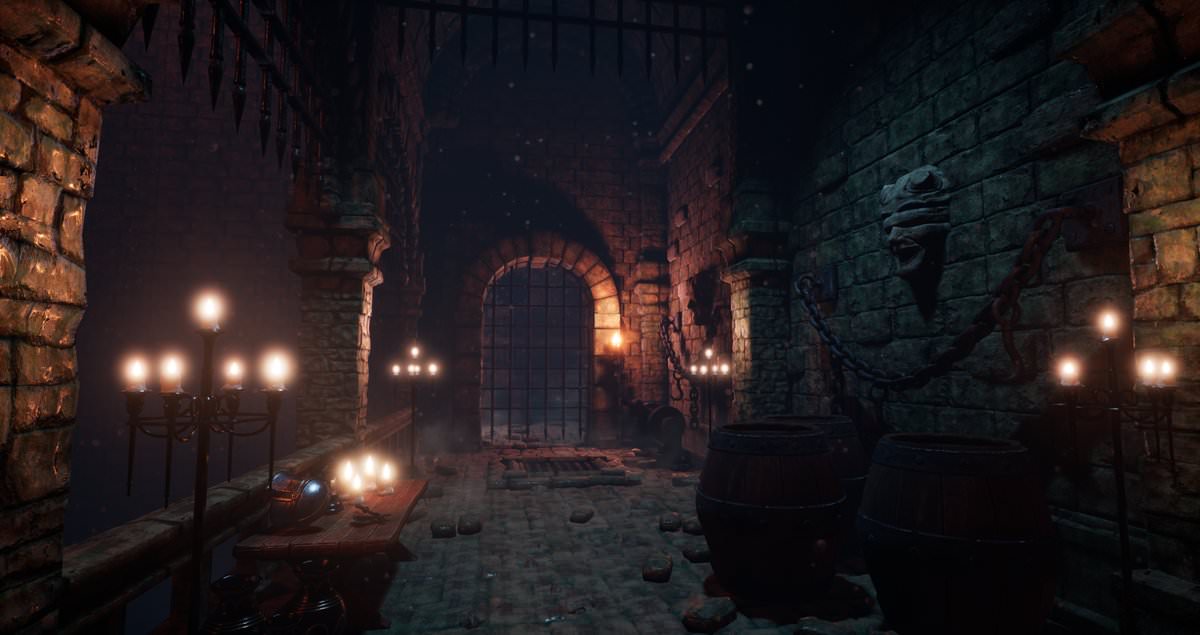 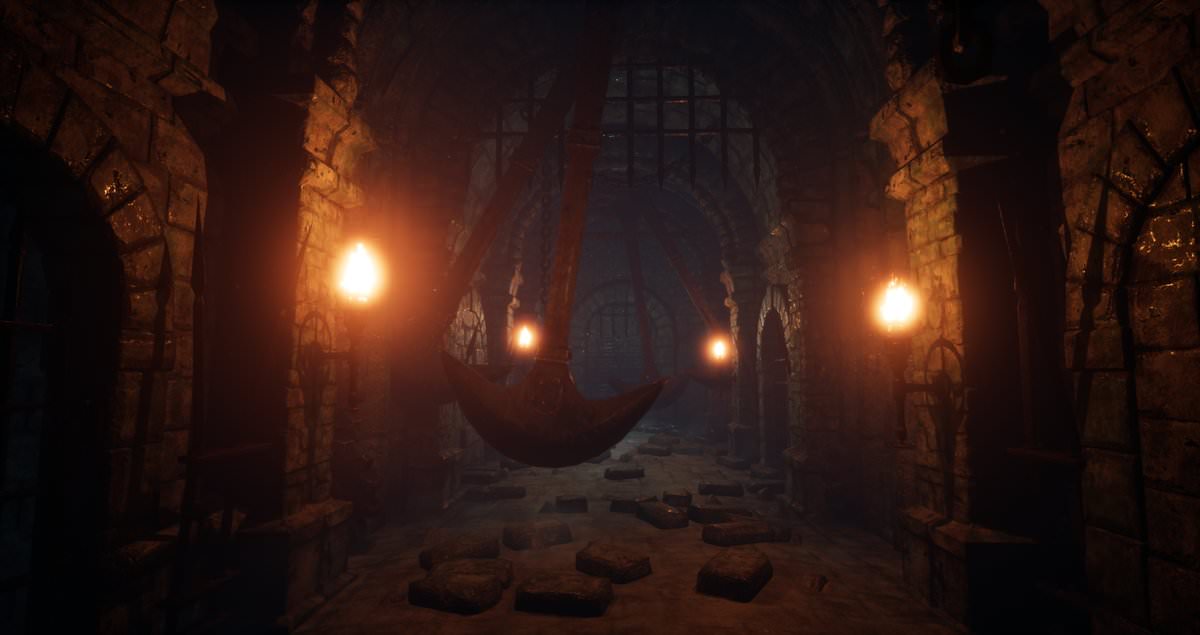 And then the big code rework came.

So in january I realized I'd make my life a lot easier if I reworked core components of the code to prepare it for AI. And that is exactly what I did for the next few weeks. That and I also reworked the UI: 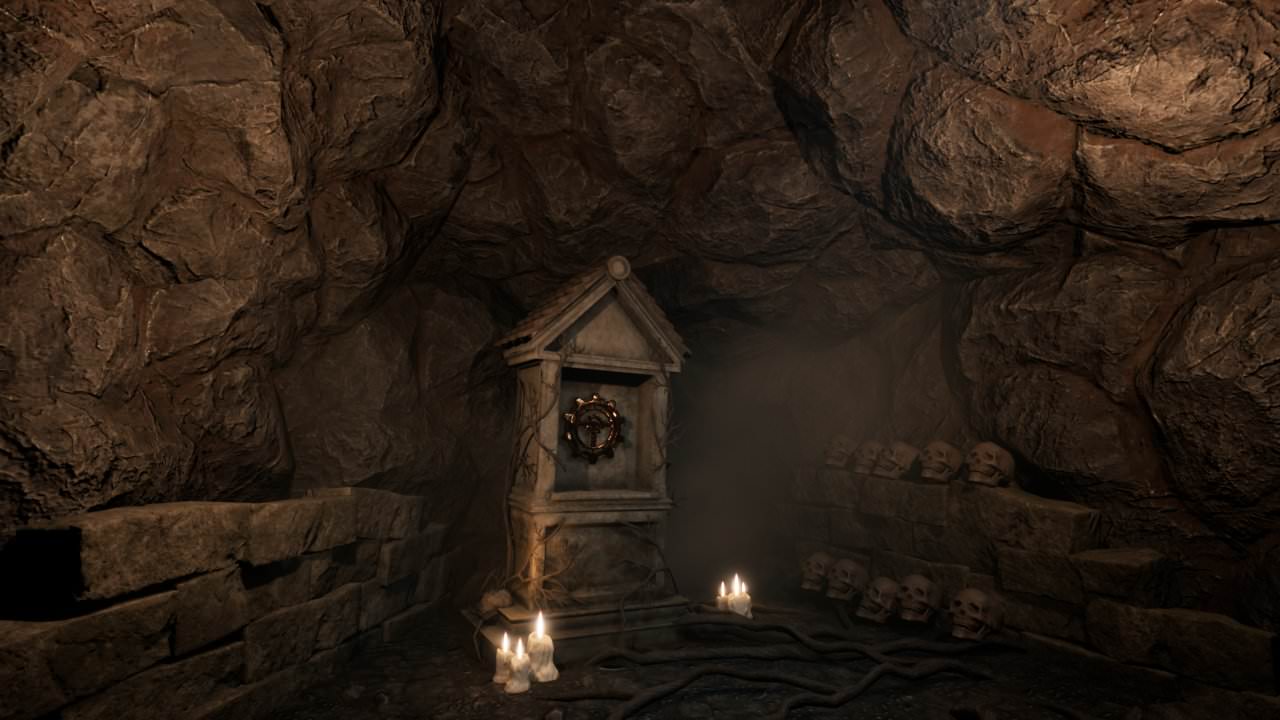 And once all of that was nicely in place I started working on the AI. Which is where I am now: 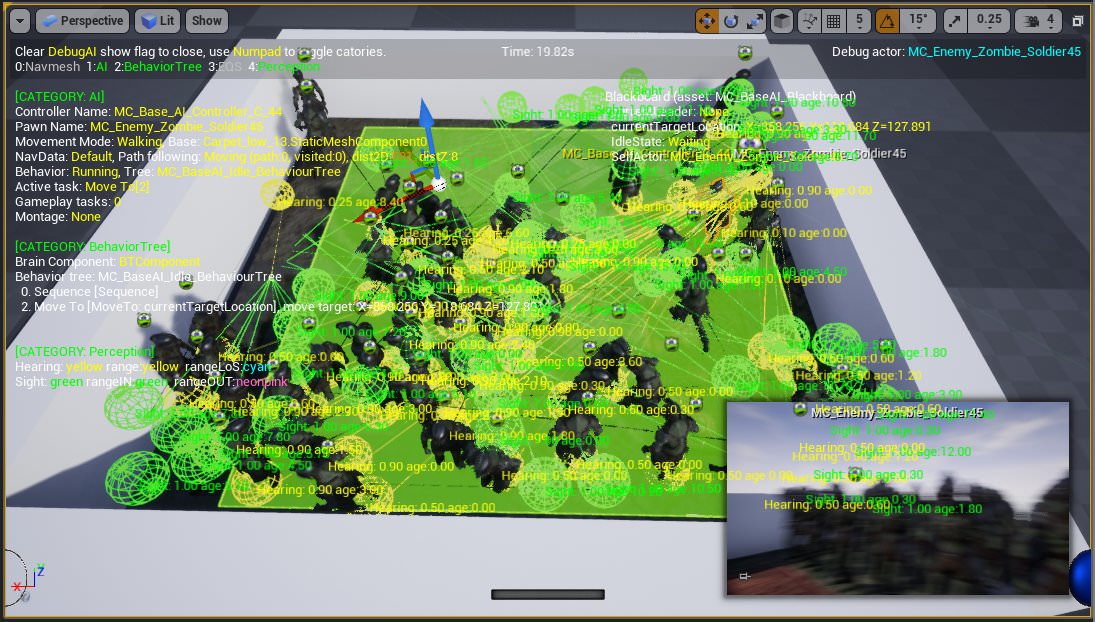 And that's where we are now.
I guess I'll try keeping this thread up to date in the future.

Either way, thanks for reading!

I like some open world games a lot, but most of them are smaller than what's normally considered "open world" today (for example Gothic 1 & 2 or Ultima 7).

Then - to me - games like Arx Fatalis are "open world" as well, despite the fact, they don't really feature any vast landscapes. Monomyth goes in a similar direction, taking notes from Dark Souls'/King's Field's world design and trying to marry that with Thief's open ended zone design.

I could imagine making another first person RPG that is more open world oriented (in the modern sense), but it would likely be under a different name.
Quote

Depends on how we define open world

I like some open world games a lot, but most of them are smaller than what's normally considered "open world" today (for example Gothic 1 & 2 or Ultima 7).

I much prefer the smaller open world games too. Lots of something, instead of a whole lot of nothing.
--
_______________
Love old text based RPGs? MUDs? Try Shadows of Kalendale:
https://www.rpgwatch.com/forums/showthread.php?t=14727
Quote

March 13th, 2018, 20:27
You have some great ideas here! And the inspirations you mention are the best as well. The core concepts of Looking Glass Studios games Ultima Underworld, SS and Thief were the most fun as fr as rpg immersive elements. Any immersive sim type environment and object interactivity you could implement would be amazing.

Heres some ideas from the Ultima, thief, ss, Arx F. series , what are your thoughts chances of implementing some form of these? The more you could the more buzz and promotion you should recive from the fans of all those to.

Thanks
--
To sum it up, I feel our space program ended up like this. "It's one small step for man. One giant leap for man kind. Oops I fell on my butt after that leap and can't get up anymore."
Last edited by buckaroobonzai; March 15th, 2018 at 06:29.
Quote