March 13th, 2018, 22:19
just don’t be overly obtuse with the puzzles please. Games that do puzzles right let the player feel clever. Too many games are out to prove how clever the developers are.
--
"For Innos!"
Quote

You have some great ideas here! And the inspirations you mention are the best as well. The core concepts of Looking Glass Studios games Ultima Underworld, SS and Thief were the most fun as fr as rpg immersive elements. Any immersive sim type environment and object interactivity you could implement would be amazing.

Heres some ideas from the Ultima, thief, ss, Arx F. series , what are your thoughts chances of implementing some form of these? The more you could the more buzz and promotion you should recive from the fans of all those to.

to answer your questions: Factions are a bit beyond the scope this project and I still have to decide on details with the dialogue system. But for the other stuff:

>possibility of object damage, like breaking furniture
So far you can break certain doors in the world. There are also some other breakable objects, but they have less of an impact game design wise.

>flammable objects
At one point in development I had flammable arrows and exploding barrels (which could also be used to "open" doors). I put those aside during the code rework, but I could imagine putting them back in before diving into level design.

>mist, smoke
Depends on the area, but generally particle effects are definitely in.

>water filled passages, cavern-rooms, with swimming
I'm not sure about swimming yet. In the earliest iteration of the player character blueprint I had it in. It really comes down to level design. I liked how much water added in King's Field 4 for example. Then again underwater combat is always a bit strange.

just don’t be overly obtuse with the puzzles please. Games that do puzzles right let the player feel clever. Too many games are out to prove how clever the developers are.

I'll try my best. But I'm also a big fan of Myst

I believe it will be something between Arx Fatalis and King's Field 4. So nothing too tough, as long as you pay attention. A hand full of very hard puzzles might be optional.
Quote

In case you ever wondered, just how big that code rework I kept talking about was, basically everything is now the same kind of entity (player, friendly NPCs, enemies).
This way of dealing with characters offers a couple of nice opportunities, like playing the game with an enemy NPC:

Whether it will be utilized this way in the end is another story, but it makes dealing with AI much easier.
Talking of which, I also worked a bit on the AI perception system. Enemies now investigate noises (animations are still rough).

I was also planning out some zones, which seems to go into the right direction now, but that's mostly on paper for the moment.
Next up: Tweaking alert states and after that combat.
Quote

Been working on combat and level design.
Thanks to a blender plugin level design iterations are now much faster.
Generally I'm following the 11 step approach (naturally it takes me more than just 11 days to make a region, since I create my own assets), however blocking out was always kinda bothersome with UE4's standard tools, so that plugin really helps a lot. There's also Mesh Tools, but I haven't tried that yet. I imagine combining those two plugins might work out nicely. 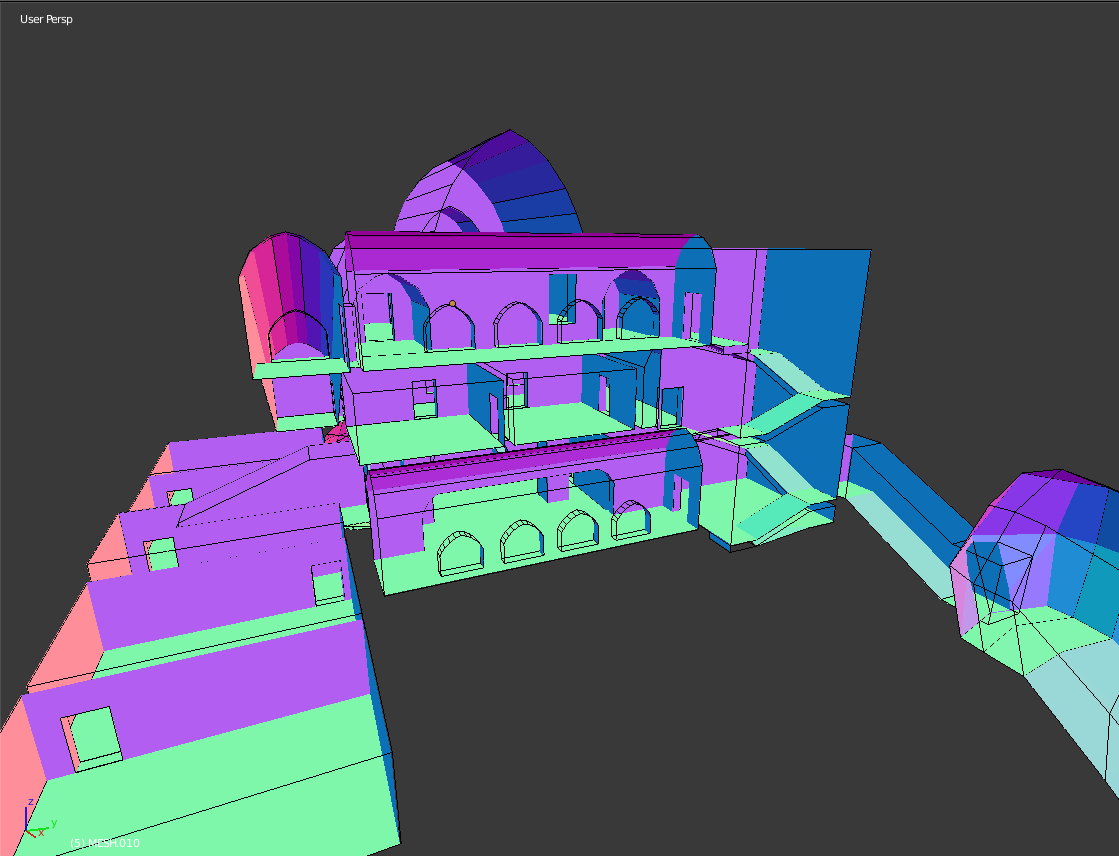 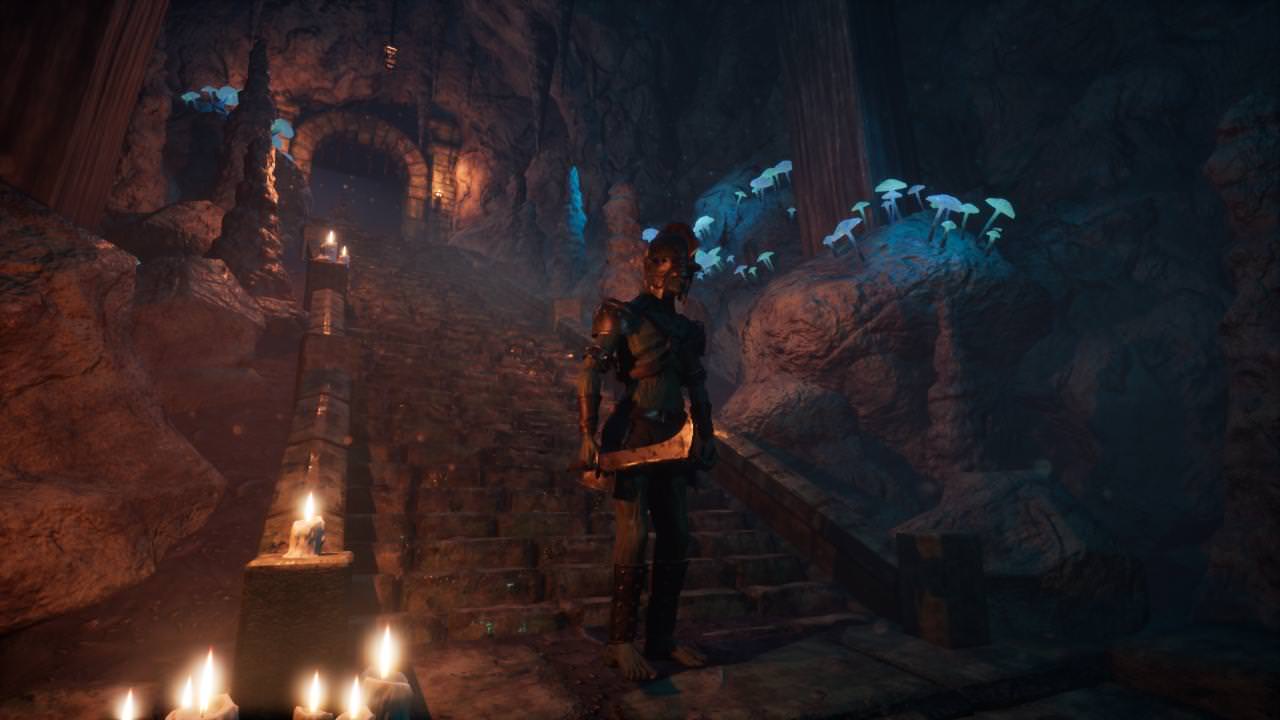 So the general approach is blocking out, placing items/enemies, playing it, fixing it, replaying it etc etc.
Once an area works out gameplay-wise I add details/lighting/and so on.

(Lock on is fully optional by the way)

Other than that most changes happened in the background.
It's not entirely implemented yet, but technically combat works like this:

Whenever you hit an unsuspecting enemy it is a critical hit.
Critical hit modifiers depend on the weapon and their respective purpose. Meaning, with a dagger a critical stab is "more critical" than a critical slashing attack.
I might still introduce an additional modifier for attacks from behind. Still gotta experiment with that since it might have a strong impact on balance. It could work out nicely if armor weight actually has a (strong) impact on sneaking. The sneak attack is supposed to give the Thief playstyle an advantage over enemies to compensate for their lack of armor. Another thing I was thinking about was combat noise, where daggers are very quiet, while maces or hammers are very loud. That doesn't make all that much sense but it might add a nice component gameplay wise. I also have to experiment with that.

Anyway, every regular weapon can parry. However, the weight of the weapon determines the result. You can't parry a heavy hammer with a measly dagger. Or at least not very well.
The bigger the weight gap between your and the attacker's weapon, the more punishing parrying gets. This goes from losing precious stamina to basically having your defense broken from a single attack.

Parrying being rather punishing is also the reason why dodge jumps exist, which can be seen here:

This is actually an older gif without pain stun animations. I should note though: Only "full" attacks can pain stun enemies. Every attack costs a certain amount of stamina. Technically you can also attack if you are out of stamina. However those won't be full attacks (and have reduced damage). At the moment you need to bring up at least half the stamina for an attack to produce a pain stun.

Blocking is essentially a better/less punishing form of parrying.
Stamina costs for blocking depend on the shield's stats and your defense can only break open if you run out of stamina.

Having your defense broken results in slower movement and being unable to counter-attack for roughly a second.
One thing I might still add is a strength bonus for blocking as well as a dexterity bonus for parrying.
Quote

April 20th, 2018, 23:45
Cool, the more of these features you can add to the game the more attention it will get from fans of looking glass studios parks in probably kings field fans.
Have you posted game design logs on ultima underworld, thief, sys shock and kings field forums as well?

>possibility of object damage, like breaking furniture
So far you can break certain doors in the world. There are also some other breakable objects, but they have less of an impact game design wise.

>flammable objects
At one point in development I had flammable arrows and exploding barrels (which could also be used to "open" doors). I put those aside during the code rework, but I could imagine putting them back in before diving into level design.

>mist, smoke
Depends on the area, but generally particle effects are definitely in.

>water filled passages, cavern-rooms, with swimming
I'm not sure about swimming yet. In the earliest iteration of the player character blueprint I had it in. It really comes down to level design. I liked how much water added in King's Field 4 for example. Then again underwater combat is always a bit strange.
--
To sum it up, I feel our space program ended up like this. "It's one small step for man. One giant leap for man kind. Oops I fell on my butt after that leap and can't get up anymore."
Quote

May 19th, 2018, 17:30
Currently getting back on track, making a lot of nice progress, especially with regards to level design.
I finally found a proper workflow, that allows fast design iterations, which was really important to me. Level design in basic Unreal is a bit of a slog, since the engine's core tools are a bit limited.
Obviously Monomyth is a game focused on interior levels, so it needs a different bunch of tools - something closer to classic level design as seen in games like Quake or Thief.
As mentioned before I'm using Level Buddy (a blender plugin for Doom/Quake styled level design), but the real key to classic level design is the combination of level buddy with an Unreal Plugin called Mesh Tools.

On their own these tools are neat, but each one of them comes with a couple of drawbacks. Level Buddy crushes your texturing every time you rebuild your map and Mesh Tools - at least to my knowledge - doesn't have those comfortable boolean unification options (i.e. you create, for example, two cubes and unify them into one mesh, leaving you with a new shape - this is bacially how level buddy works). Together however they are perfect for what I'm doing. Level Buddy allows fast blockouts/geometry creation and Mesh tools allows fast (in-engine) UV projection (that also includes texture scaling - which is bothersome if you have to switch between Blender and Unreal all the time). So my level design workflow currently looks like this:

1. Gathering reference material
2. A really quick doodle of the area's outline.
3. Blockout in Level Buddy
4. Import into Unreal
5. Testing, cutting stuff, changing it again, bascially going back to 3. a couple of times - in this phase the design from 2. changes a lot. I tend to combine this with basic Unreal block brushes to roughly measure the scale of an area.
6. Once I'm confident about a part of the map, I snip that part off in level buddy and separate it into its own mesh.
7. Then I work over that isolated part again. I also do a quick UV projection (texturing) with Mesh Tools - this is like two or three clicks, so I can still change the level in Level Buddy afterwards
8. Then I continue with various detail passes - especially placing modular assets (like wall decorations in a castle or pillars in a cave)
9. I do this for every part of a level. Once the isolated parts of an area come together I also tend to make small in-engine changes on the geometry, polishing and fixing stuff - again with Mesh tools.

During all of this I also play around with the lighting a lot.

And that's basically it. Of course before any of this I need a rough idea, what the challenges in an area are. I like to define those very loosely though and slowly fit them into the level as it comes together. Makes the design phase a bit easier - also lets you think about the level more logically - from what I know this is basically what Thief did - where a castle wasn't just a bunch of hallways, but actually an environment where people could live in - you had kitchens, living rooms, servants rooms, bed rooms etc.
This is where the design principle clashes a bit with the King's Field side, which was entirely focused on challenge when it came to level design. It had secrets where secrets technically didn't make all that much sense and the entire ancient city doesn't have a single bathroom. So there is a challenge in marrying those two approaches towards level design. It works out surprisingly well so far, but in doubt I'll always go with the King's Field approach, since interesting gameplay is still my primary focus. This is especially valid for secret walls, traps and puzzles.

Anyway, the alpha level is coming along really, really well. Here are a couple of WIP screenshots: 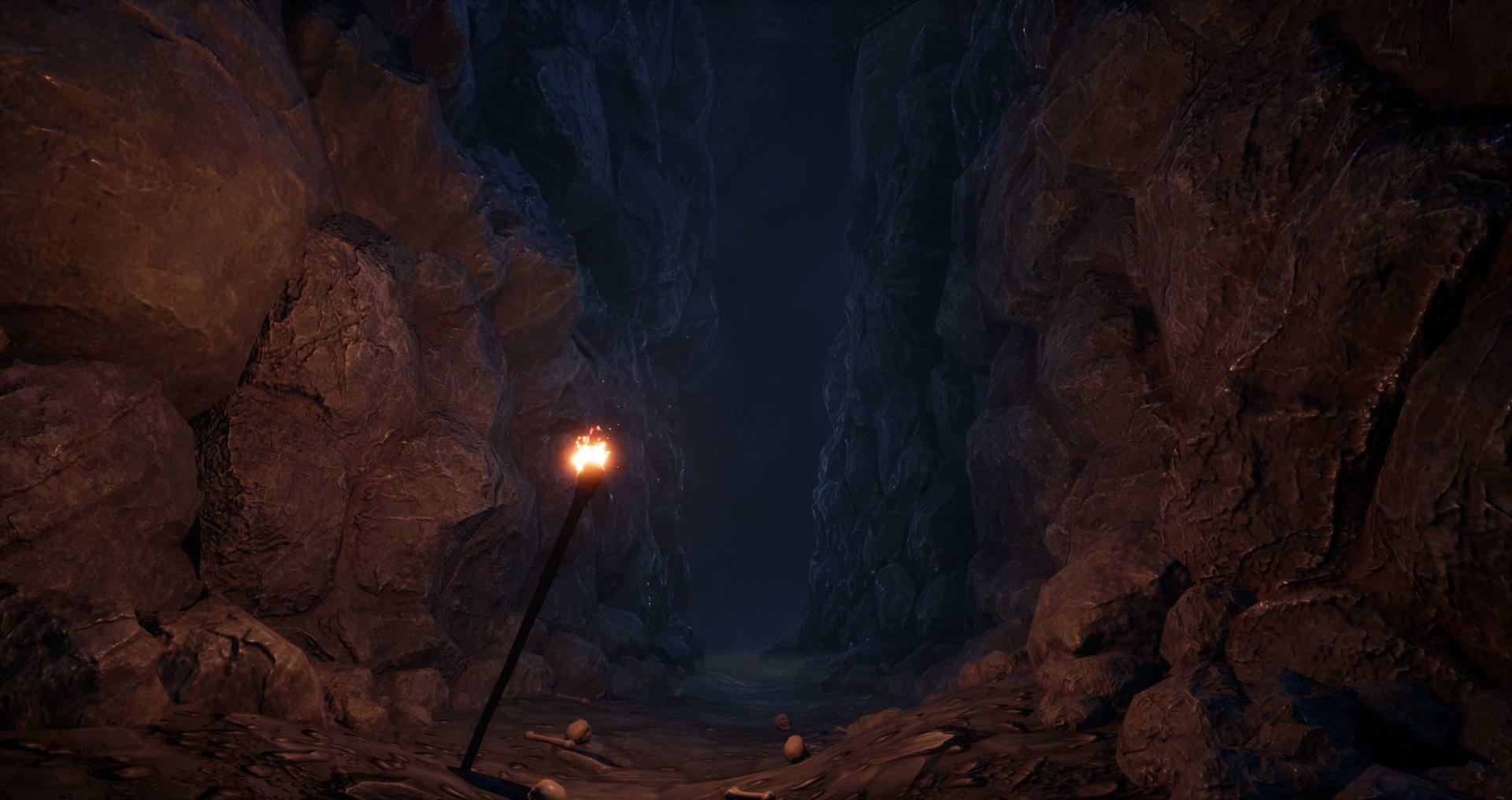 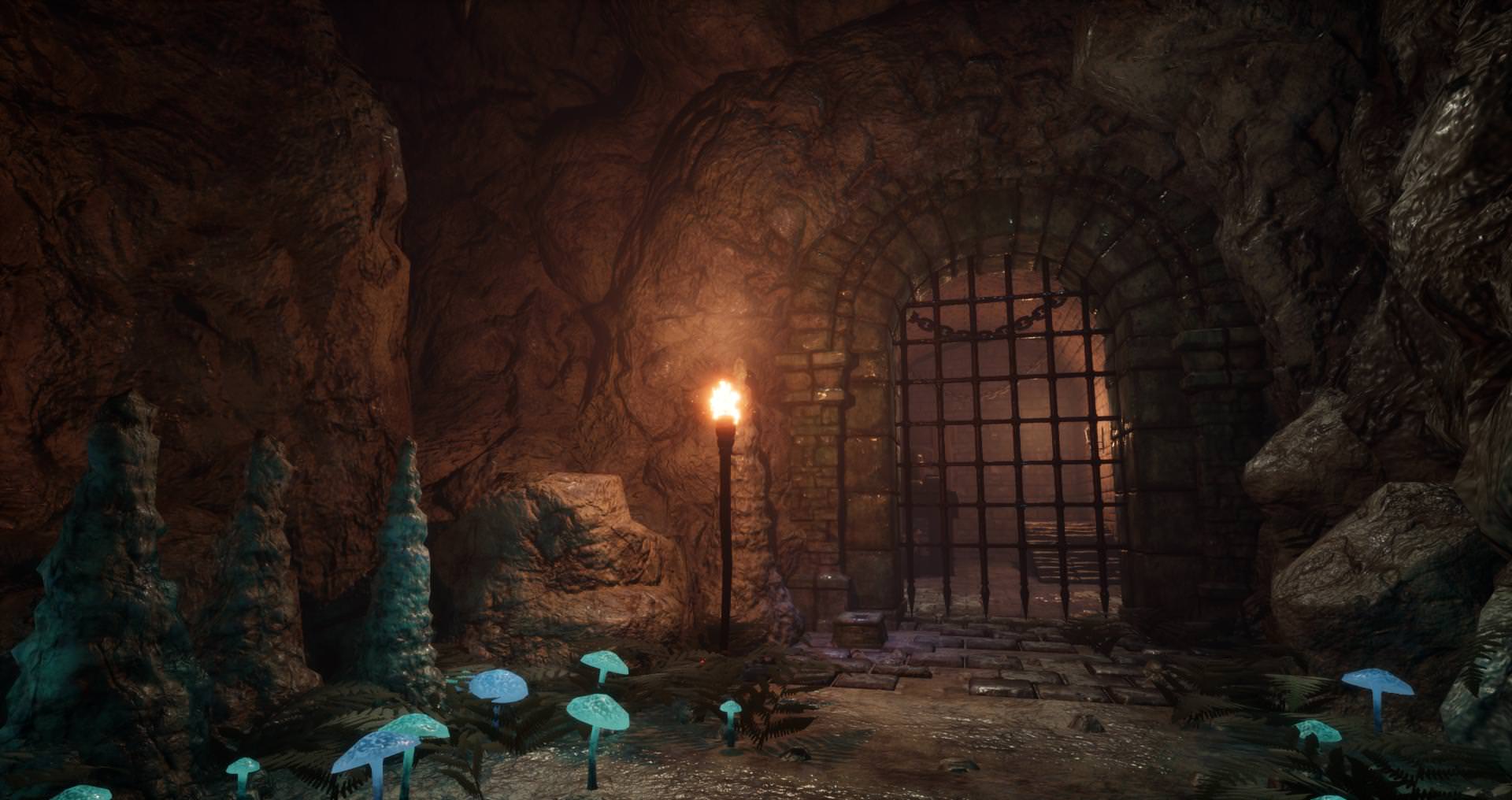 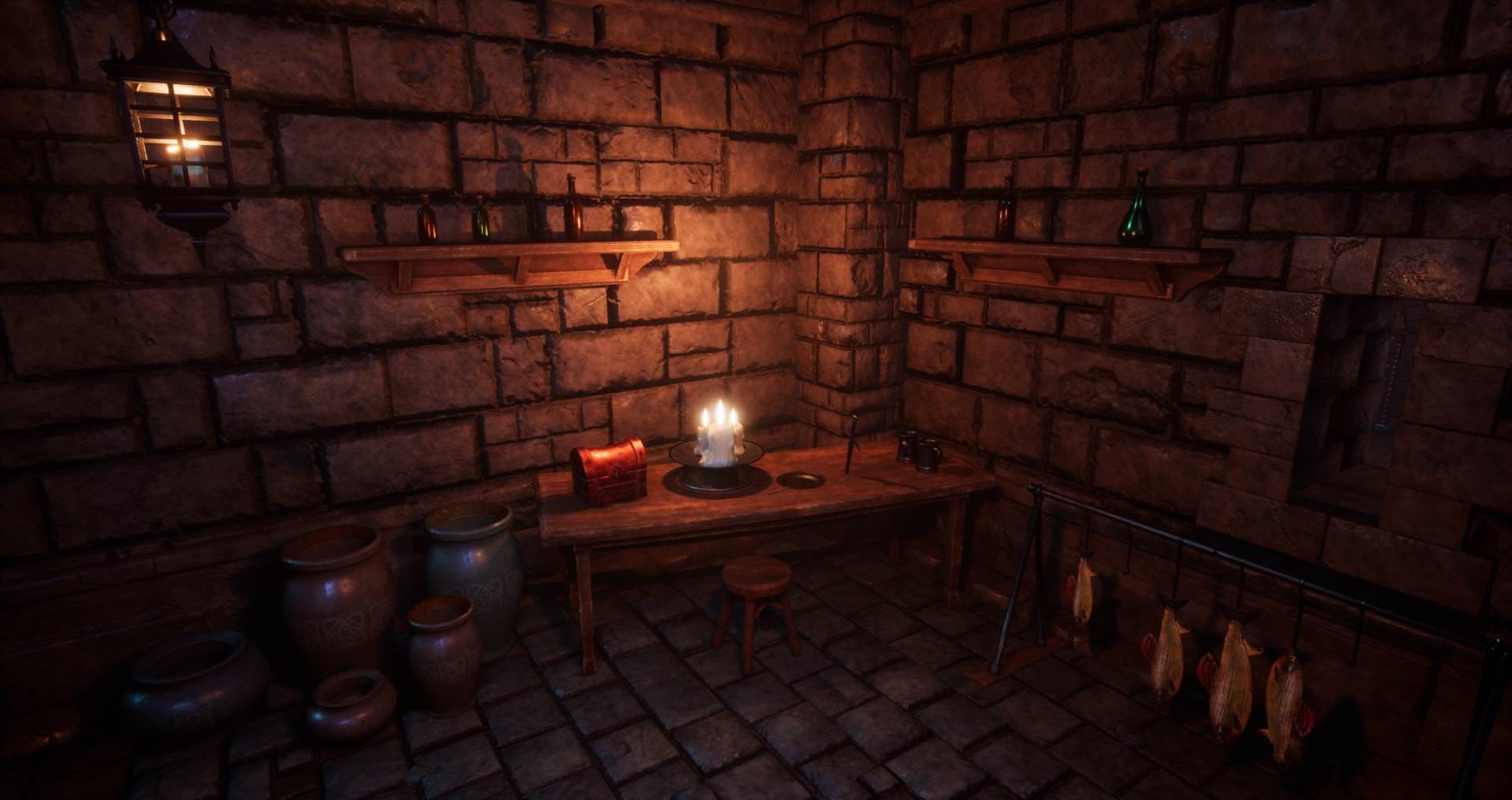 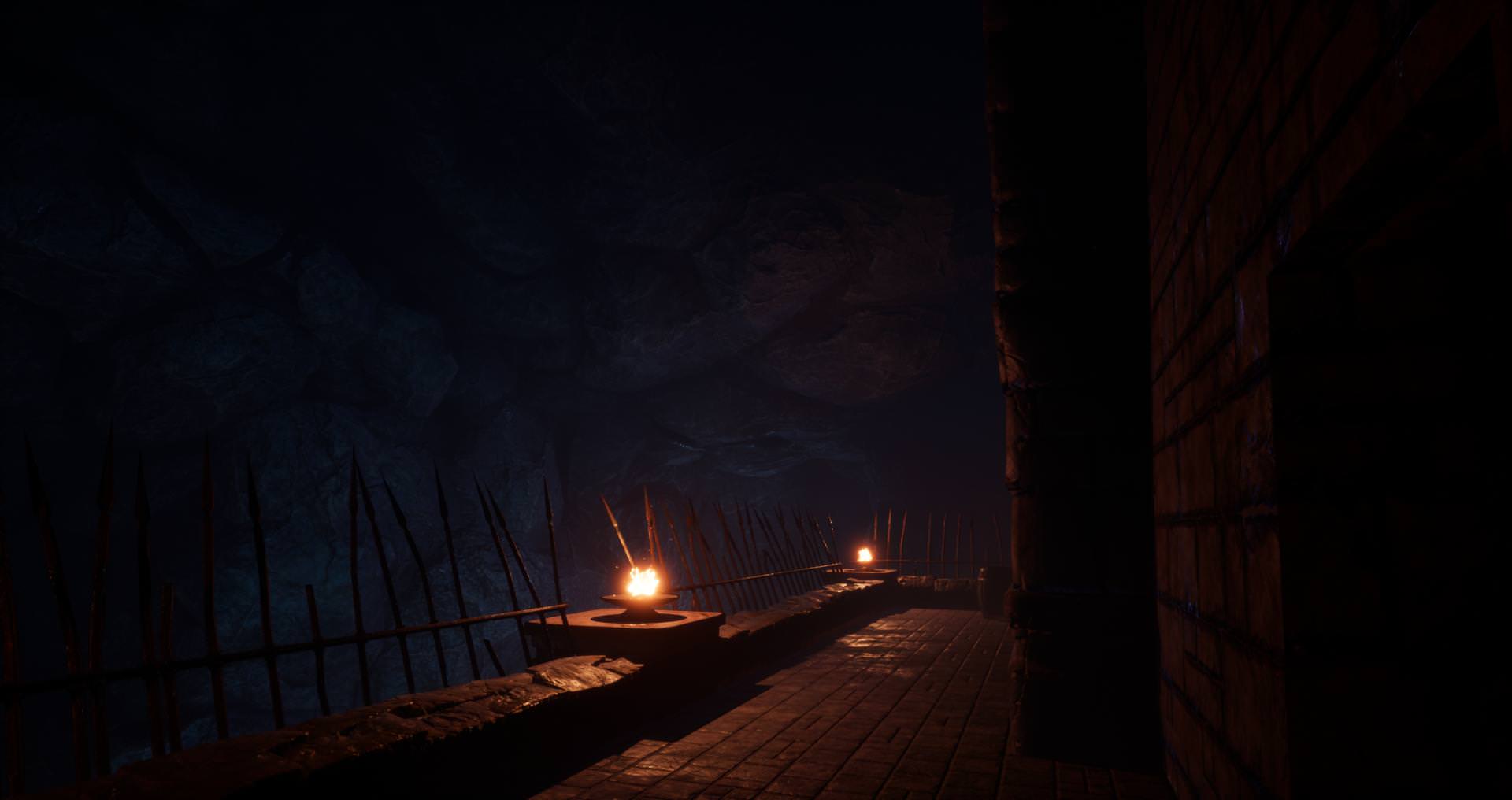