May 8th, 2020, 00:43
A new update for Solasta: Crown of the Magister goes into spells and city design among other things.

Let's swap things around a bit this time, and start off with spells instead of finishing with them. Our VFX Artist has been very productive these last few weeks, and we have every intention of sharing her work with you! I present to you Frost Bolt, Guidance and Guiding Bolt!

We also have some more spell icons to share! Have fun finding out what spell each one represents. First one to get them all right get a Forum Title from yours truly!

Speaking of magic… Where did our adventurers end up this time? That's more books than you could read in a lifetime… several lifetimes even. I won't spoil too much about this location, but let's say if you expected Solasta to be all about going around caverns murdering orcs and goblins, Wendy you've got a surprise coming to you.

Oh boy, more Caer Cyflen. Being the main city of our game, it's very likely that we'll keep polishing it while working on Act II and even beyond. That means you get to see it evolve alongside the development team in our bi-weekly Dev Updates! Hopefully that's something you enjoy, make sure you tell us how you feel about that in the comments. 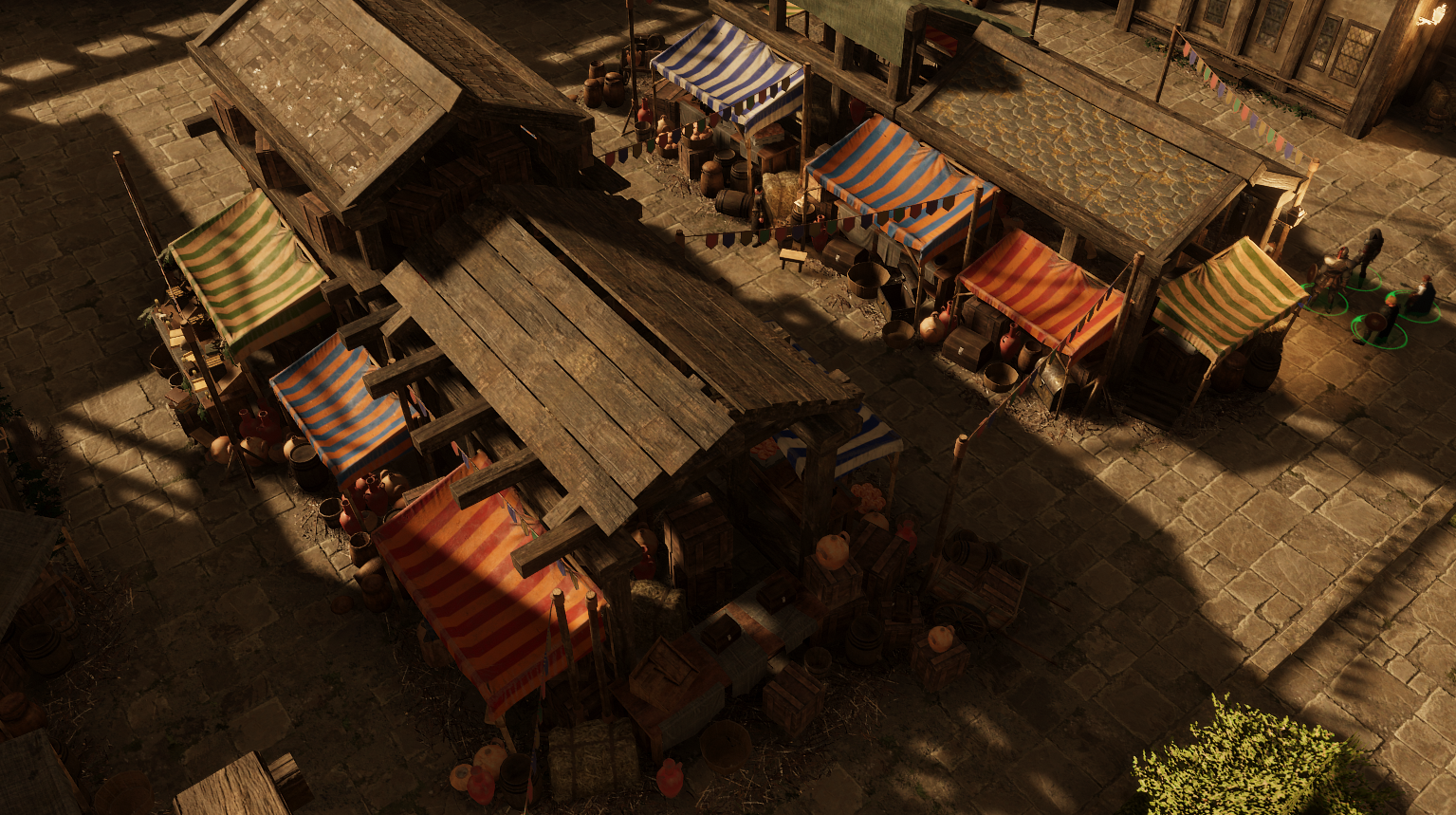 The marketplace is slowly taking shape, now the next step is to add some life! 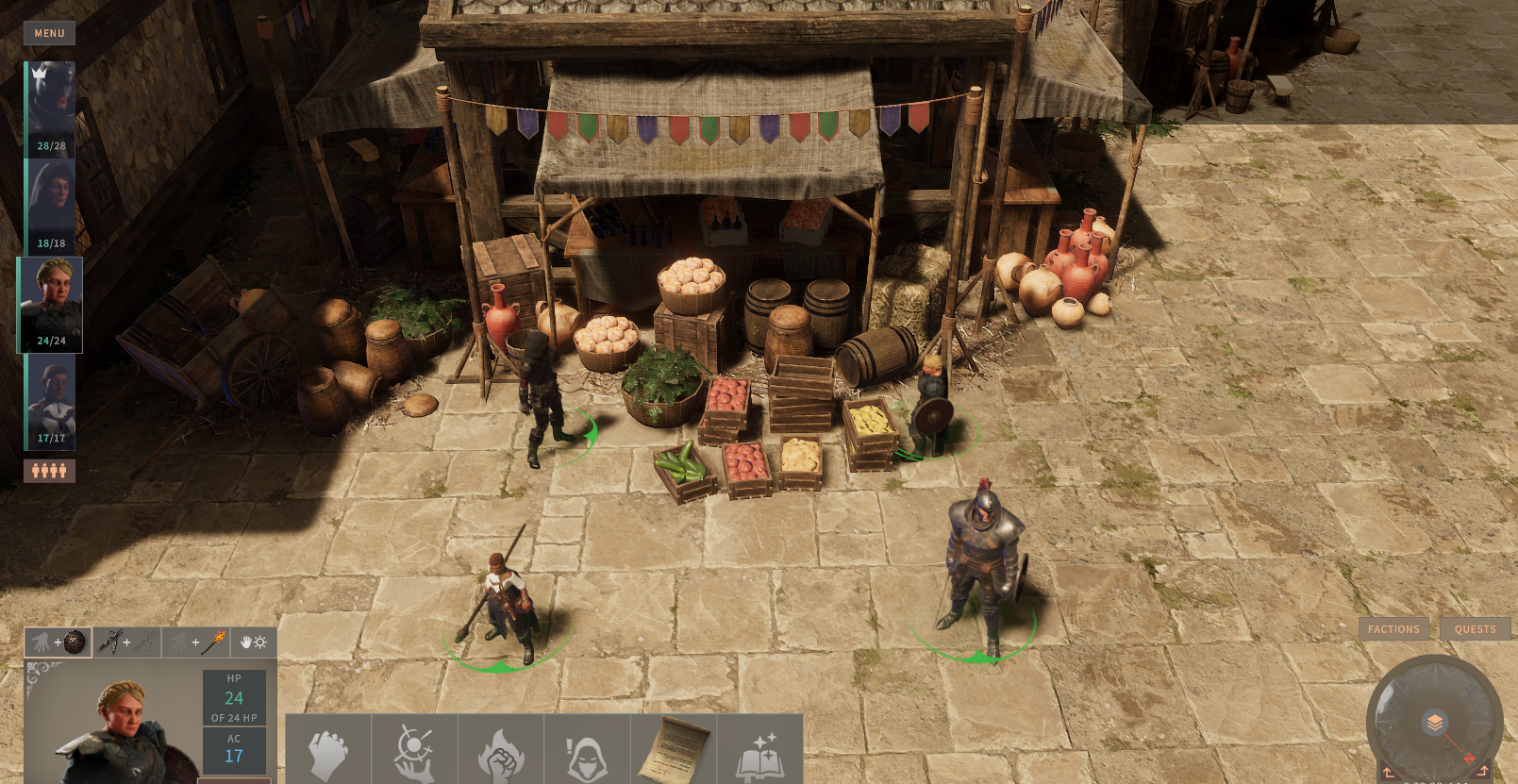 Fruits and vegetables aplenty! Tonight we feast!
As its name implies, the marketplace is where you will be doing most of your shopping. Fun fact: we used to have all the vendors scattered across the city so that they could each have their little corner with its own ambiance and decorations, but after playing for a bit we realized that running back and forth between the different shops was more tedious than anything else. The first time going around the city was great, but doing that every time you come back from an expedition was excruciating to say the least.
This is also when we decided to reduce the playable area of the city. Now that may sound like a bad thing to do, but think of it for a moment - larger cities don't necessarily make for a more enjoyable experience. Unlike playing on tabletop, you can't just skip the long and boring walk between the city gates and the castle - the DM isn't going to make descriptions of the same streets for 15 minutes every time you come back into town (at least I hope not). Adding fast-travel would be a work-around; but in that case what's the point of making a large city in the first place if players are always using fast travel after the first time? Therefore, we decided to pack most activities in a smaller playable area of the city - less time spent running is more time spent adventuring! 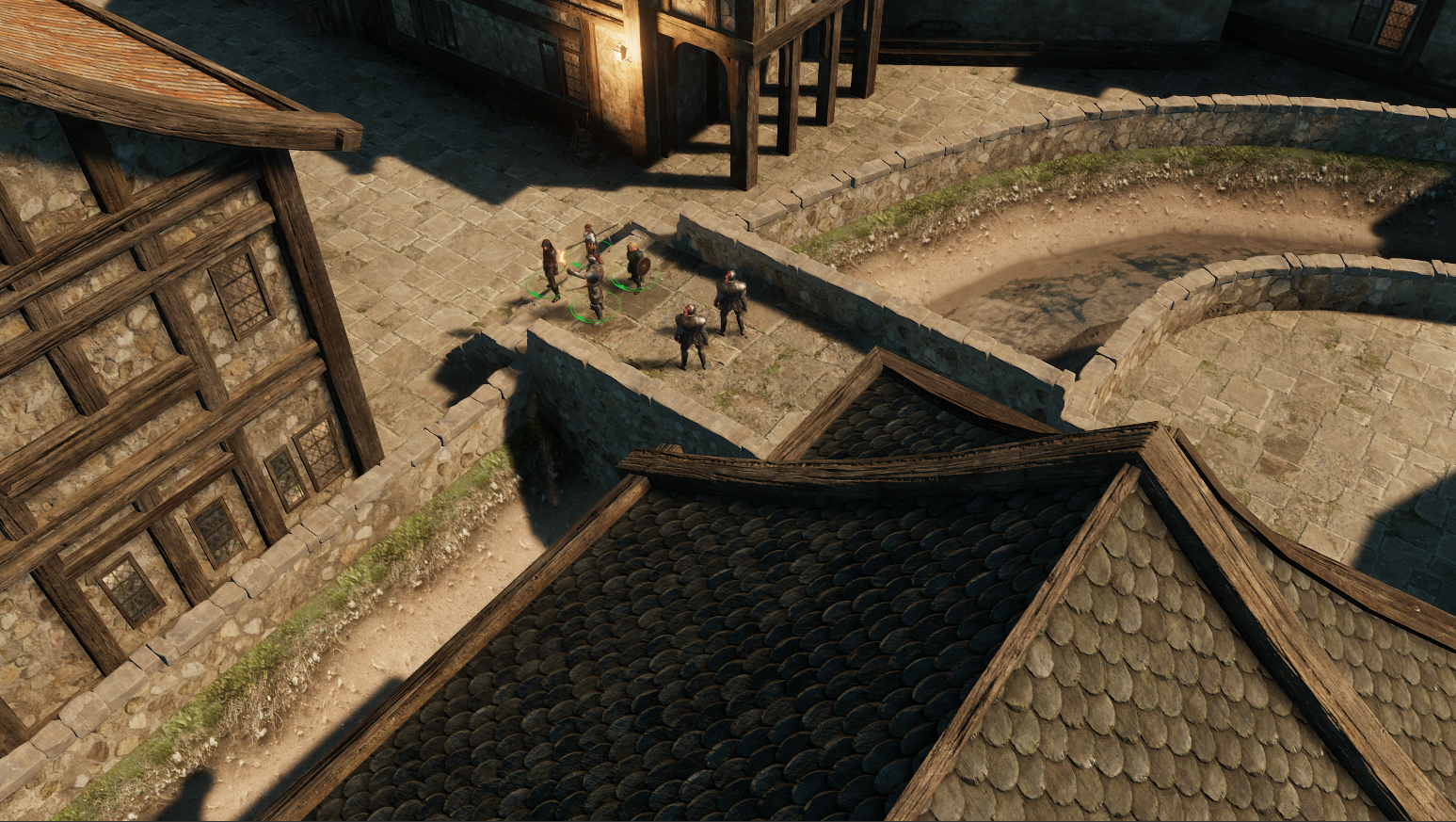 Here you can see the canal before adding the water, we'll have another screenshot ready for you once it's filled!
[…]

May 8th, 2020, 07:05
Not a fan of the icons, but that is a minor gripe. Everything else looks very good to me. Very looking forward to play this!
Quote

May 8th, 2020, 18:11
Liked the demo quite a bit. There are some things in it they need to work on (like camera control) but otherwise I was pretty impressed!
Quote

May 8th, 2020, 20:44
It seems a lot shy away from developing cities as a place of adventure instead of a stop and shop…..bioware was really good at using cities as the adventure area.

Maybe I am reading to much into what they are saying?
--
If you don't stand behind your troops, feel free to stand in front.
Quote

They're really good at posting updates. 4 or 5 news posts a month, including votes and contests. I think that's the way to do it, and makes a project look much healthier.
--
"And if I laugh at any mortal thing, 'tis that I may not weep."
Quote

It seems a lot shy away from developing cities as a place of adventure instead of a stop and shop..bioware was really good at using cities as the adventure area.

Maybe I am reading to much into what they are saying?

I understand what they mean.
Its because cities generally are implemented very poorly.

Isometricish games like BG, IWD, Torment, Tides, TOEE … etc handle cities by making 90% of it a static image with no interaction. They are able to 'infer' city size by just making the inaccessible areas flow off the screen giving the illusion of scope. When you actually see the paragon lines and the access paths defined you'd be surprised at how little room there is, and how much 'space' is just inaccessible image.

This illusion is significantly harder to achieve in first person because you see every door & window and unless the scope of the game is massive, most of it will be blank or full of repetitive filler. (Dungeon Lords, brutal example of empty cities).
Even games like Fallout have to be very careful to limit settlement actual size (not illusion size with inaccessible 2nd floors, buildings that are 4x as deep as the accessible areas, etc) before it becomes filler or obvious the world is empty.
--
How about all games have a single huge lootbox you pay for up front that contains all the options, items, skins, unlocks etc? I'd pay for that!!
Quote

May 11th, 2020, 19:58
They have really good design sense, a big bonus for this game.
Looking at the multi-level library, will they have interactivity akin to Larien Studios BGIII where opponents can be knocked off a level to fall, or even fires (so many books)?As far as city design, they have a good plan. They can present city districts in minute detail making them more interesting. Then, they can have quest locales presented as narrow/alley-like pathways through the city just to that location so it doesn't have to be presented nor traversed repeatedly.
I hope they explore the city of Tarant in Arcanum for design inspiration as it does a wonderful job of evoking a grandiose, vibrantly big city while keeping the travelling and emptiness to a bare minimum.
Arcanum has an amazing large city traversal sub-system: A minimap you can annotate which you navigate by clicking traversal waypoints and the party runs from waypoint to waypoint. This is similar to what tactical wargames use for ease of large map traversal/navigation.
Quote

They're really good at posting updates. 4 or 5 news posts a month, including votes and contests. I think that's the way to do it, and makes a project look much healthier.

I agree as to many projects go silent or move to discord only updates.

Edit: Another good example are the constant video updates Larian does.
--
"We live in a stupid society where everything is racist and diversity/identity is our strength. I feel like humanity is lost, common sense is erased. Welcome to the United States of Idiocracy"