September 2nd, 2013, 18:40
You may remember this Kickstarter from last year  it was for creating a game engine aimed at recreating gold-box style games with lots of modern updates (such as a decent conversation system!).

The good news is that the engine is now nearly at Beta! The very good news is that Bree Arts have somewhat over-delivered on their campaign promises, and the engine will now include an easy-use tileset editor and fully customisable classes / races / traits / skills etc.

Some of the forum regulars are posting Lets Plays of demo modules on Youtube, which give an indication of the state of play with the current Alpha build of the engine:

Someone else on the forums put together a useful list of engine stuff that Ill just cut and paste:

- superfast and easy building in a grid based 2D world with free form maps as detailed or as rudimentary as you like, using premade tiles or full scale unique painted backgrounds

- an insane amount of flexibility (create your own classes, races, traits, spells, items, creatures, graphics you name it, most of it already possible via - mostly intoolset - editors),

- support for not only for fantasy, but also scifi, western, post-apocalyptic, spies&agents, steampunk

- a directx9 based graphic engine, allowing various animations of NPC/player sprites and other ambience objects and effects

- floating text above NPC heads in- and outside combat, providing statistical info as well as one liners or activity descriptions

- the option to change the party sprite, e.g. to a boat or a horse

- the ability to designate one of the party members as leader, e.g. for doing conversations or to have some his abilities used on world map

- support for bringing in own music and sound effects

- a Line of Sight system

- support for year long campaigns with savegames that can still be used after the campaign author adds in new regions, creatures, items, classes, traits, spells

And this is just the work in progress state, e.g. world time, weather including full screen effects, day & night cycles with changing view ranges and atmospheric tinting, moving NPC with schedules, Fog of War, more battle AI variety are just a glimpse of the features that are likely to make their way into IB in the next few months, too.

Anyway, have a look, and see what you think!
Quote

I'd like to clarify that the IB engine isn't solely directed at recreating Gold Box styled CRPGs, but can be customized to handle a wide variety of different CRPG styles. Also, in fact, it doesn't have GB styled exploration with a first person view; only the combat (and to some extent, long distance travel) could be said to resemble GB games in style, IMHO.

Other than that, I approve of this thread!

--
"It is pitch black. You are likely to be eaten by a grue."
Quote

I'm just putting together a module now that is a campaign for a single character, with recruitable NPCs with personalities / individual dialogue options based on circumstances etc. The combat is quite gold-boxey, but the rest of the module is very different to that.

In future, Iceblink combat will also have a lot more options than the gold box games had - for example, you will be able to set up specific tiles to trigger environmental traps / narratives and weird creature special attacks. And that's not to mention the fact that you have a free reign in developing your own race / class system, so traits such as cleave, whirlwind attack or whatever else you come up with could be factored in… on both sides! Could really make for some strategically difficult encounters.

All of the modules with youtube links above give a flavour of the kind of things people are working on currently, but there's a lot of possible variety for different approaches. I'm really looking forward to see what people do with it!
Quote

Here's a short video showing off some of the key features:
https://www.youtube.com/watch?v=waRyDix1QGo
Quote

Stop on by the neverwintervault and download the engine to start playing some of the already available adventure mini-modules.

I'll be uploading the Tilemapper and NWN2toIBConversationConverter programs later tonight.

Module Making Contest will be starting soon with a few months to work on your project before ending the contest.

January 3rd, 2014, 22:21
I'm having a lot of fun with Dorateen's "Castle Hearkenwold" at the minute. Its a classic party-based adventure heavily inspired by the SSI Gold Box games, and in fact uses art assets (sprites and some tiles) from the Forgotten Realms Unlimited Adventures archives.

Its not finished yet, but you can still have hours of fun with it (and I think he promised an update later this month.

). Its refreshingly challenging, and Dorateen has made great use of conversation options based on class and race etc.

Its well worth checking out.

A couple of screenshots: You'll need a copy of the engine to play it - you can download that here:
http://neverwintervault.org/project/…ne-and-toolset
Quote

January 7th, 2014, 21:00
I just wanted to post a great new map image that was posted on the Iceblink forum by Skitnik. I really love the art style Skitnik is using, I'd love to see a full module like this!

I just wanted to post a great new map image that was posted on the Iceblink forum by Skitnik. I really love the art style Skitnik is using, I'd love to see a full module like this!

March 30th, 2017, 22:19
Just wanted to bump this as the Iceblink 2 engine (and IB mini for a simpler but easier to use version) is now underway with more features and a polished UI. See some updated pics below:

Curse of the Wailing Death Prelude 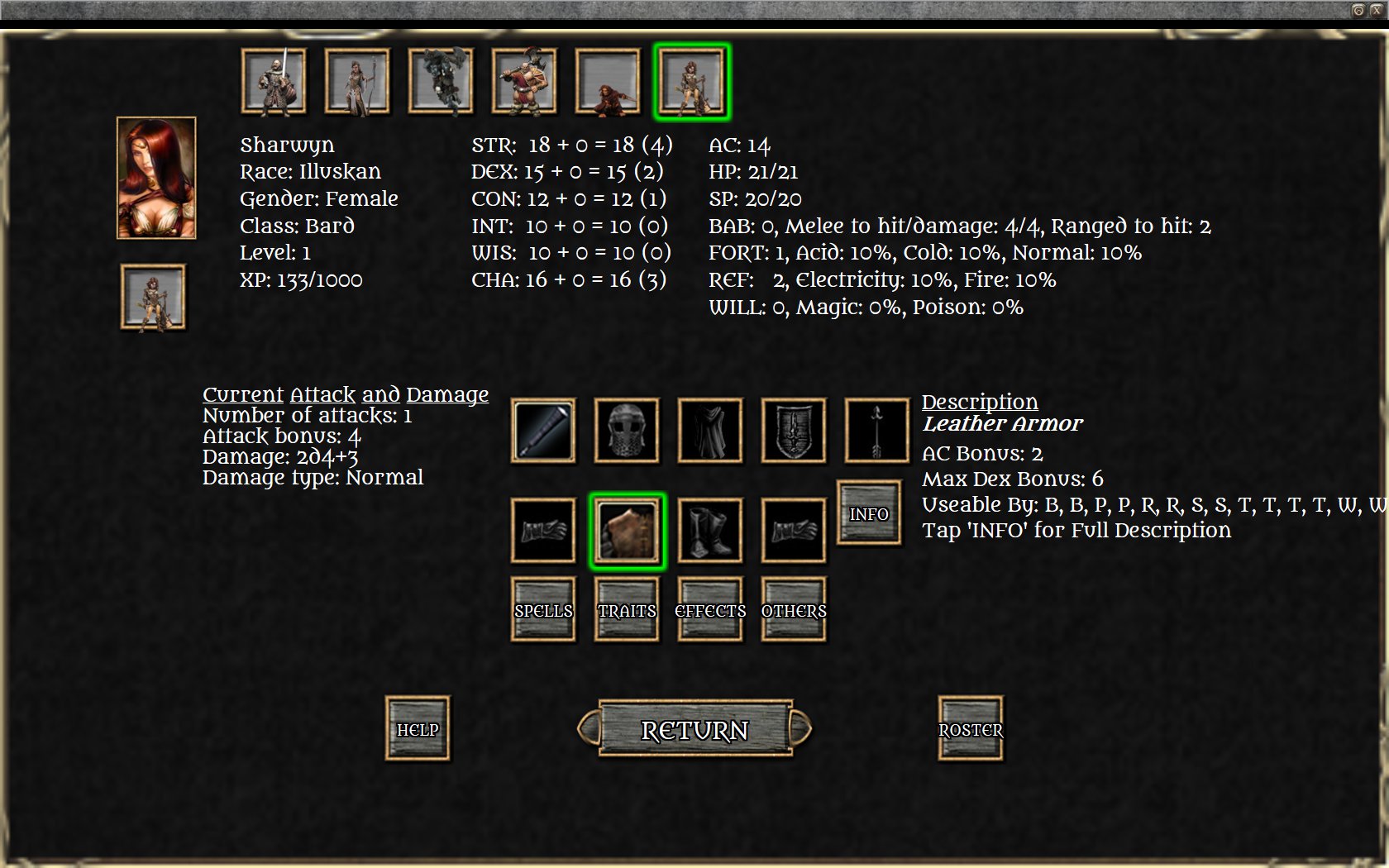 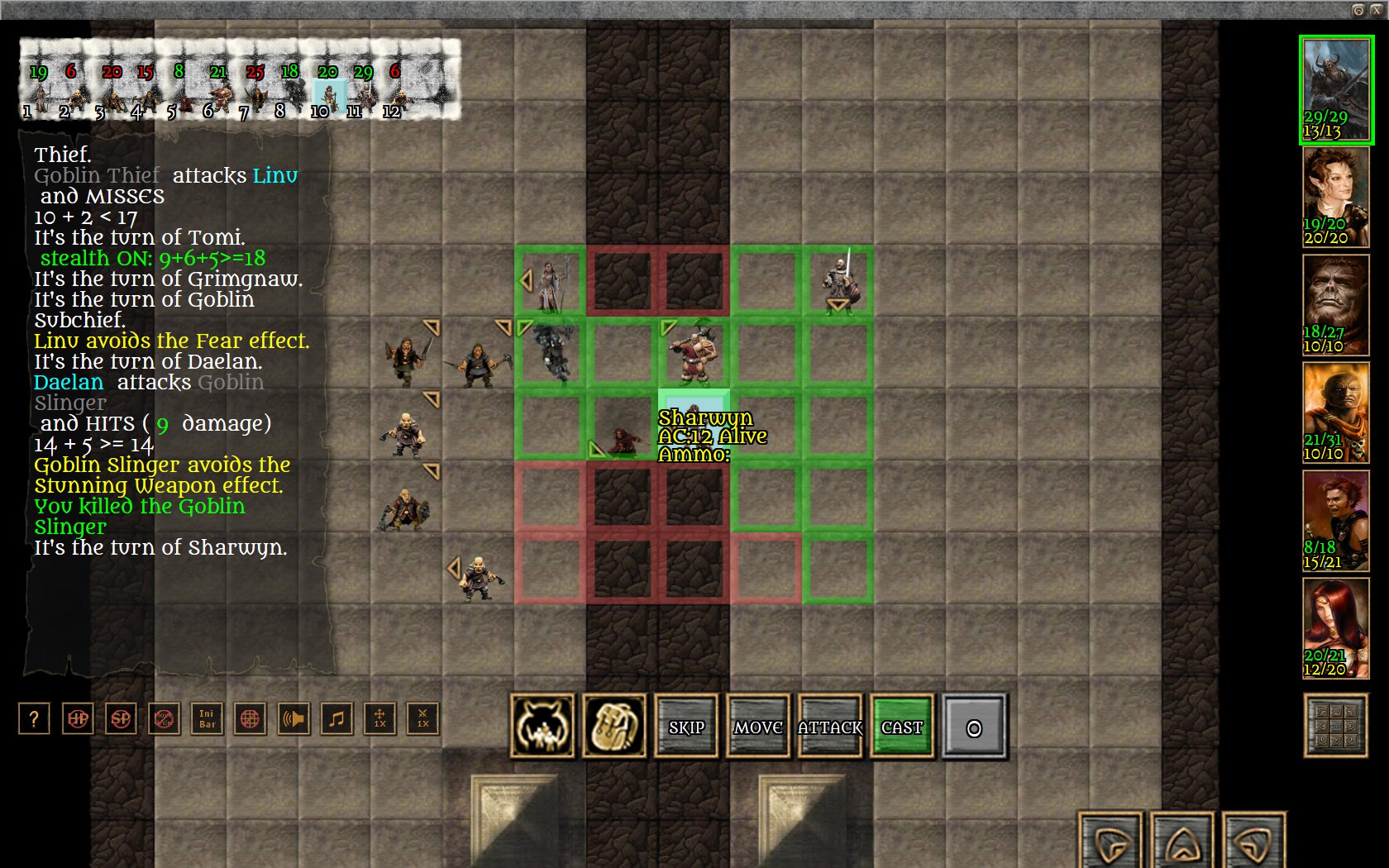 March 31st, 2017, 08:38
Yeah I'm looking forward to playing Curse of the Wailing Death. It has a really interesting premise - the mod author is using the original design documents from the Neverwinter Nights game to try and recreate the original vision, which apparently would have been very different. Looking forward to giving it a spin.
Quote

Also want to get to Knights of the Chalice soon. Didn't realize what a great D&D implementation that game had when I first played it years ago.
Quote

April 1st, 2017, 06:22
Knights of the Chalice got the old school gold box system more right than any other game I've seen to date. I wish he was cranking out a game every year. Or better yet, several.
Quote

April 1st, 2017, 21:22
Playing Pongo's module now. Both this and KotC have incredible potential. Just wish more people were into stuff like this.

April 1st, 2017, 21:37
I've played one or two on my Android and I wasn't overly impressed - mainly due to it suffering from what NWN always did - too many crappy modules.

But even still, the overall look wasn't impressive. That said, its pretty far along for an open source project.

I have started and stopped a few of my own like this.
--
Developer of The Wizard's Grave Android game. Discussion Thread:
http://www.rpgwatch.com/forums/showthread.php?t=22520
Quote

Playing Pongo's module now. Both this and KotC have incredible potential. Just wish more people were into stuff like this.

Cool! Be interested to hear what you think about it.
Quote

Cool! Be interested to hear what you think about it.

I was playing a bit of The Elderin Stone on my tablet yesterday, and really liked it a lot. Nice exploration rewards, with interesting combat encounters. I'm impressed whit the writing as well. Really pulling me in a way that some of the try hard AAA or AA games don't.

The only thing that stopped me from continuing to play is unfortunately the interface of the Android version. It has some UI issues that make it a bit tough to get into. The biggest one being that there doesn't appear to be any way to quit in mid-combat. You have to quit the program entirely. There's also seems to be a few bugs, but not sure where to report. I'll guess I'll do it here:

Spoiler – spoiler
1. For some reason there were times where spells don't seem to be working at all. It's hard to know because when it happens it doesn't register on the log. It's almost as if the action was not taken. I noticed it when trying to heal an unconscious party member with a cleric spell as well as when I tried to cast Sleep on the Ogre (giant?) monster in the cave in the first map. He could be resistant, but the spell itself or the result didn't appear on the log at all.

2. I came across a dialogue option when meeting the druid that had no conclusion. It just ended. There was no way to exit out of the dialogue screen at all. It just showed the response. Only option was to quit the app.

3. Does the module have sound? Slowdive mentioned the app has it, but I didn't hear any at all in your module.

4. When you come across something on a map, the yellow text descriptions sometimes gets cut off by the App UI.

Sorry to say that after #2 I kind of got frustrated and stopped playing. I think I'll boot back up tomorrow. But from what I saw it is a real quality module. I'll make sure to sing its praises here and on the codex.
Quote

Just wish more people were into stuff like this.


Also, I think it just needs to get to a place where there's more polish before IB takes off. One of those things being some quality of life things to make it easier on player's and the other just means better art and effects.

Like I posted earlier, I'm making my own art for my module, but it's slow going (finished another one today and have another to finish tomorrow). Still, hopefully when I'm done we have a good set of tokens for PCs and a few for monsters. As well as some tile sets for environments.
Quote