September 3rd, 2021, 22:43
After reading this article, I think I might have to reroll my neutral evil elf necromancer-to-be-lich….
https://www.pcgamer.com/being-evil-s…the-righteous/

I haven't played more than 20 min. so I can't tell if the premise of the article, you can't be evil without being comically evil and no one really cares about your evil deeds, because 'chosen one', is accurate.

The only instance I've encountered yet where the evil-option didn't fit with my character was that woman who was stuck under some rubble that you could demand some money from if you were to help her, I decided that it was beneath my character to indulge in such petty behavior and helped her out, free-off charge.
Last edited by MAHak; September 4th, 2021 at 08:41.
Quote

September 4th, 2021, 00:22
I haven't played evil, but is this guy, Fraser Brown, really basing his whole article on a few dialogue tags? That seems shallow and unimaginative to me.
Quote

September 4th, 2021, 00:50
I chose human Sage Sorcerer primarily for being able to have high Int so lots of Skill points. Liking it so far, but spent 2 days reading and consulting with others before making a choice.
--
If God said it, then that settles it!!

I haven't played evil, but is this guy, Fraser Brown, really basing his whole article on a few dialogue tags? That seems shallow and unimaginative to me.

Seems like he's basing it on a lot more than a few dialogues, but I'm not nearly far enough along to know if I agree with him.
Quote

Spoiler
I think no matter what you do (take Wenduag or take Lann), you end up with the same choice when you get to the end of the Maze and have to pick one of them to take to the surface. It was a fairly agonizing choice, but I ended up taking Wenduag despite her being very obviously evil and self-serving and prone to betrayal, and me being neutral good. I usually make choices based on RP, but in this case I made it for more prosaic reasons… I like her voice actor better, and I don't want a "Zen Archer", like at all. I came up with some RP reasons the game won't support (I'm an Oracle, so something about foreseeing her playing a major role in repelling the demons despite her own [lack of] morality), but honestly I just didn't like Lann. Oh, well.
Quote

Seems like he's basing it on a lot more than a few dialogues, but I'm not nearly far enough along to know if I agree with him.

No, but it seems to be a big part of his problem with the game since he mentions it a lot.

I try not to pay attention to those tags too much, the fact there's an evil/attack in so many of them does feel a bit ridiculous, yes, but that's one easy way to offer the choice. There are several evil choices without a tag, too: letting Ember or Ramien be executed (or encouraging it) could be seen as somewhat evil.

He says the player is a saviour and cannot escape this role. Indeed, it kind of is the story line, the world needs saving. But does that prevent him from playing it as evil? He can pretend to be a manipulator waiting for a better opportunity, using others to save his skin in the mean time.

This story is all about survival and epic fighting against demons, which leaves less room for personal agendas than Kingmaker. So playing evil here is almost the same as fighting solo against the two camps (which is possible I think). Before he can do that, he has to play a lesser evil, that's probably what bothers him, he would rather play the ultimate evil but it's the wrong setting for that. I don't think that should make this subtler play less interesting.

Maybe evil choices aren't as broad as in other settings, but considering all the choices this game offers (including lich / swarm-that-walks), this seems like nitpicking.

But again, I haven't played evil, it's just my impression. I can only try it in the future to confirm either way.

You can change back and forth, anytime. Except the crusade management, if you set it on auto, you cannot go back to manual. There's a warning for such irreversible changes.

Thanks, I already saw that.

And, supposed a full dot means = 1 point n difficulty - why are Rogues so much easier than every other class ?

Liking it so far, but spent 2 days reading and consulting with others before making a choice.

Uh … That sounds bad for Newbies to Pathfinder like me …
--
"Any intelligent fool can make things bigger, more complex, and more violent. It takes a touch of genius and a lot of courage to move in the opposite direction." (E.F.Schumacher, Economist, Source)
Last edited by Alrik Fassbauer; September 4th, 2021 at 21:55.
Quote

Thanks, I already saw that.

And, supposed a full dot means = 1 point n difficulty - why are Rogues so much easier than every other class ? 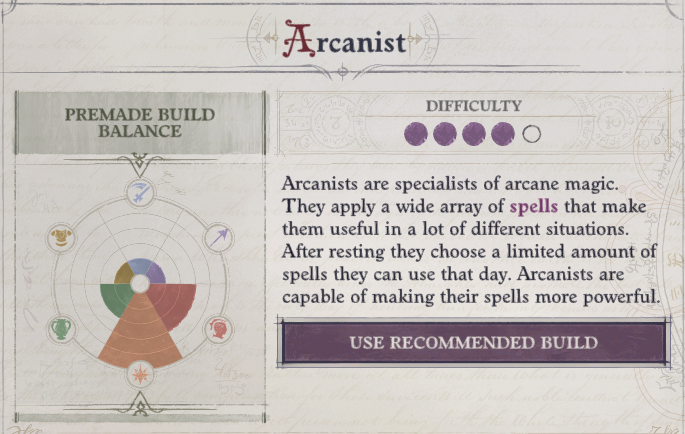 Clockwise from the top, each symbol shows the effectiveness of the base class in a specific domain:
Here the arcanist has a predominant magic role, that they can use to control enemies and a little bit to support the party. Conversely, a cleric would have more green than red.

The overall difficulty is just to give an idea. Classes like fighter or rogue are conventional, well understood and their mechanics is relatively simple. Classes like bard or arcanist have more complex mechanics that are less intuitive.

Maybe the more we know about Pathfinder, the more it's difficult to choose.

September 5th, 2021, 15:53
Thanks. I think a mouseover-tooltip for this graphic would be nice. I think I'll suggest that to them on Discord. Edit : Done.
--
"Any intelligent fool can make things bigger, more complex, and more violent. It takes a touch of genius and a lot of courage to move in the opposite direction." (E.F.Schumacher, Economist, Source)
Quote

Thanks. I think a mouseover-tooltip for this graphic would be nice. I think I'll suggest that to them on Discord. Edit : Done.

Actually, there already is a tooltip for each of the symbols

But you have to hover each symbol.

For the suggestions, I recommend to use the in-game report tool. Just don't forget to select "suggestion" instead of bug. On Discord, especially now, it's easily forgotten.
Quote

September 5th, 2021, 16:58
I enjoyed the graphic and thought it was very useful although in the end I often ignore suggestions being a contrary and difficult person at times lol

I like how they broke down the focus a lot and the points do help new users … as long as they understand what they are looking at so like Alrik's idea to add a tool-tip to it. I knew what it was because my mind quickly reverse-engineered it.

EDIT Saw Red said it does have a tool-tip … I also missed that lol going to have to look now.

Meaning I know what rogues, fighters, mages, clerics, rangers, etc., do and quickly figured out, based on what I expected, how the chart was working.

I seldom go the suggested path as some things annoy me. Like a fighter with atheltics, mobility, and stealth skill taking a HUGE hit to the skills in heavy armor. So I never play any character in heavy, or even medium, armor who might have skills affected. I don't even like a -1, annoys me as I do all I can to increase skills not decrease them.

So I have lots of glass cannons although luckily there are plenty of decent buffs and light armor to work around it overall.

Right now my Feral Champion has an AC of 23 at level 6 and level 1 Mythic. He is wearing a +2 Mithiral chain shirt with 0 skill hits, plus a +2 natural armor amulet and a +2 ring of protection, and his lucky bracers. He is my main character for athletics and mobility. While Seelah, the Paladin, who doesn't need any of those, is in full plate +1 armor and shield and is AC 26. They are my two highest AC but then I do give my guy most of the best trinkets (if he can use them) and rotate them down.

But I find the game is pretty forgiving which is a major plus for me as I hate feeling forced into a min/max build and won't even play a game that actually requires that style of gaming. I want to be capable but also role play into the character. The Pathfinder games, both of the computer ones, have been awesome for this.
--
Character is centrality, the impossibility of being displaced or overset. - Ralph Waldo Emerson
Quote

And now to troll the thread!

It took me less than 10 mins to make a character I intend to complete the game with!

Actually, there already is a tooltip for each of the symbols

But you have to hover each symbol.

I tried, but never saw any.
--
"Any intelligent fool can make things bigger, more complex, and more violent. It takes a touch of genius and a lot of courage to move in the opposite direction." (E.F.Schumacher, Economist, Source)
Quote

I tried, but never saw any.

I forgot to look into the Encyclopedia. I doubt it's there though, it would be more user-friendly to place the legend somewhere on the screen.
Quote