And yes, Conan is actually a middle easterner in this as well, he is often referred to as "The Sumerian".

… that's Conan the Cimmerian, not Sumerian. He's from a fictional country, so not middle eastern.
--

that's Conan the Cimmerian, not Sumerian. He's from a fictional country, so not middle eastern.

Ah, that makes sense. It was likely just an actor/some actors saying a word they were familiar with rather than remembering the exact scripted word. I guess the fact that it takes place in the desert and features camels at one point is as much to do with the thought process.

I mean, Sinbad films aren't strictly middle eastern either, in that they usually quickly sail to a fantasy land of some kind far from home. One just recognises the underlying imagery as being middle eastern - most likely because most pre-history civilisations would have been… middle eastern, with a hint of orientalism.

Have you ever seen one of the Sinbad films?
Quote

That title is a mustwatch. With subs!
--
Toka Koka
Quote

I've no idea if this is the case with any of you lot, but I'd be interested in hearing all of your thoughts on this well aged theory.
Quote

I despise drama/war/history/biography - does that mean my biography and my history are so rich and fantastic? No. Not to me at least.
Or another example, I do think I'm happy, yet I can't bring myself to suffer through any depressive drama.

On the other hand the genre I love the most is thriller. Of any kind, action, crime, psychological, I love them all. My life definetly isn't thriller, so if the theory speaks only about the favorite genre and nothing else, I guess it's correct in my case.

Another thing to note. I can't stand dull, shallow and stupid movies. Any. So stupid it's funny worked on me when I was still a baby. When I grew up, I strated to throw up on those and express my opinion bluntly. If a thriller sucks, I'm not entertained and I'll hate it.
Does that mean that in RL I'm so stupid that it's funny?

June 18th, 2020, 18:33
Yes, its more about which emotions your life lacks than the exact specifics of the subject matter. A bit like how health experts sometimes recommend diet supplements or diet change if they think your body lacks something.

Thrillers are one of the most common genres, most likely because people's lives aren't really very thrilling. However, an undercover cop's favourite relaxation film would probably be a Hallmark movie or Downton Abbey or something.
Quote

What's it about? Impossible to write in a short post. I promise you'll love it!

If no stream around you has it in the catalogue, note that it's available only on DVD. No BluRay.

Curon if I'm seeing it right is a miniseries of 7 eps. And we're in movies thread…
Anyway, added it to my "to watch" list, sadly with so many titles I still didn't touch finding time for it won't be soon.
--
Toka Koka
Quote

Watched A Man for All Seasons (1966). Great acting. The reign of Henry VIII and his daugthers was a crazy, crazy period in English history

Yeah, from the Wars of the Roses to the Glorious Revolution, it was pretty much Game of Thrones. I think George Martin has said that was a big part of his inspiration.
--
"An era can be considered over when its basic illusions have been exhausted." Arthur Miller
Quote

July 3rd, 2020, 15:55
Surprisingly, I had not seen John Carpenter's The Thing. And I did so last night. I liked it quite a bit. I found many similarities to the first Alien. Loved the setting and premise.

Even though the practical special effects are showing their age a bit, they do have a particular something that makes them very unnerving and freaky. The spider creatures were particularly freaky.
--

Surprisingly, I had not seen John Carpenter's The Thing. And I did so last night. I liked it quite a bit. I found many similarities to the first Alien. Loved the setting and premise.

Even though the practical special effects are showing their age a bit, they do have a particular something that makes them very unnerving and freaky. The spider creatures were particularly freaky.

I think it's a masterpiece. The effects have dated, but I actually find them far preferable to bad CGI that we see so often.

Every year, at the Amundsen-Scott South Pole Station, they show the film for the skeleton crew that gets isolated there for the Antarctic winter. I don't think I'd like to stay for the winter, but I'd love to visit for movie night.
--
"An era can be considered over when its basic illusions have been exhausted." Arthur Miller
Quote

July 3rd, 2020, 19:17
The Thing is, without a doubt, one of the greatest horror/thriller movies of all time. It must have come out over forty years ago by now, and still holds up. If you've not seen it and enjoy the genre, it is a must!! Even the fifties version is still well worth watching , also.
Quote

July 3rd, 2020, 21:31
I've never been a big fan of The Thing (1982). For me it was a remake and I'd seen and enjoyed the original (1951) quite a few years before I saw the 80s version, so there was an element of butchering the classic in there when I watched it. I recognise it has superior monster FX though, it's just that by itself wasn't enough for me, having already been very used to those kind of FX from many other 80s films.

I guess context is often important for why some films click and others don't, as I can imagine it stands out more if one hadn't seen the original first and if one wasn't already overly familiar with the FX style prior to watching it.
Quote Clockwise (1985) stars John Cleese in a slight variation of his Fawlty Towers character who is obsessed with punctuality. Needless to say, he needs to get somewhere by X o'clock and the world conspires to prevent him getting there.

It's classic farce with many laugh out loud moments and a glorious array of madcap characters, somewhat reminiscent of those race movies like Cannonball Run or Mad Mad Mad Mad World.

For all the famous faces that inevitably show up throughout (for their time), one of the standout performances is by the practically unknown Sharon Maiden who plays a schoolgirl dating the music teacher who Cleese's Headmaster commandeers to drive him to Norwich. She, of course, is still learning to drive and "only failed her test on one little thing"

She practically co-stars with Cleese and yet this was to be only her second movie, and her last. I can't think why, she has a wonderful screen prescence.

And that 80s nostalgia is strong in this one! : 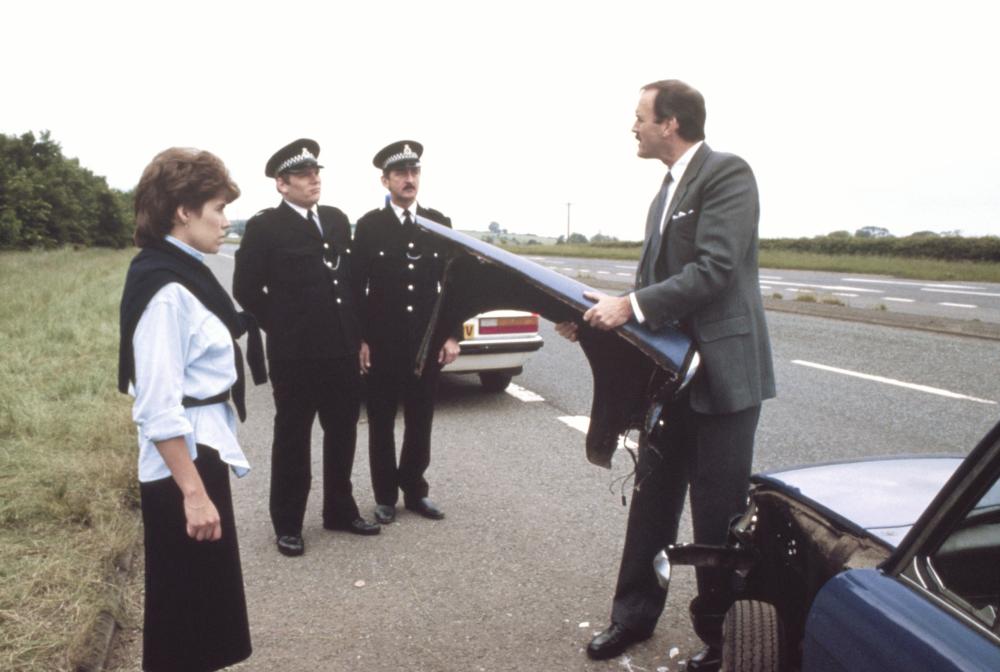 Slightly slow in a couple of places and not all the jokes land, but on the whole a very enjoyable way to spend a an hour and a half in this delightfully bonkers universe 8/10.

The Missionary (1982) on the other hand is a Michael Palin vehicle that attempts a similar kind of madcap farcical romp but is much more hit and miss and not at all consistent in delivering either pacing or punchlines.

Even after having watched it only a few days ago, I've already forgotten the plot entirely and couldn't give you an accurate synopsis even if I wanted to. He gets sent on a mission to 'save' young prostitutes in London, hilarity ensues? That's kinda it, but it's more about the love quadrangle between his prospective wife, his prospective lover and all the young prostitutes.

Funnily enough, the part I found the funniest was a non-plot character, the butler of the husband of his prospective lover, masterfully played by the late legend Michael Hordern who has zero memory. The scene where Palin is led on a merry goose chase round a ridiculously large mansion by Hordern, who has no idea where he's going, is one of cinema's all time classic scenes IMO.

Maggie Smith is great as well, in fact all the acting is great, it's just that it feels too disjointed to come away with it feeling very satisfied that ones time wasn't necessarily wasted if you know what I mean. There's no real nostalgia factor either as it's set in the Victorian era.6/10 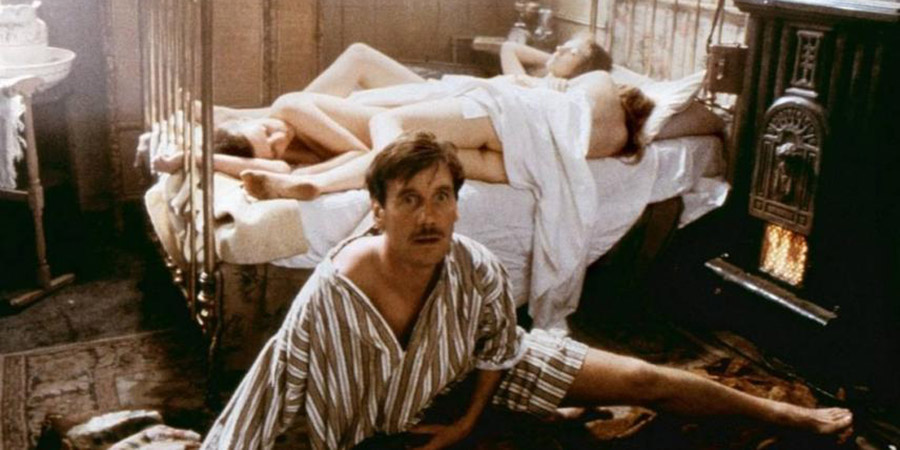 July 11th, 2020, 22:06
I believe we did mention Clockwise before. If I mixed it with another forum then…
An underrated gem, deserves to be a part of anyone's home dvd collection.
--
Toka Koka
Quote

July 13th, 2020, 14:43
Dracula Sucks featuring Reggie Nalder as Van Helsing a year before playing Kurt Barlow the vampire in Salem's Lot. Makes you wonder if Hooper or Spielberg saw him in this.

Human Beasts from Paul Naschy. The scene where a white doctor whips his naked black lady sl…servant for pleasure probably wouldn't fly in a hollywood movie today, but to be fair I don't think it would have back in 1980 either.
--

July 19th, 2020, 13:33
I'm thinking of re-watching Gettysburg & Gods and Generals. I love how the movies portray both sides of the conflict. To bad Time Warner ruined any more sequels.

I recommend reading the 1,000 page novel the movies are based on.
--
"My news thread updated weekly for anyone interested in more news." - Couchpotato
Quote