(though there are rare exceptions). Black Panther is the worst big movie i've seen by far, even many b-movies are "better" in the way that at least they are more entertaining. Aquaman was a total surprise and i bet tons of people will miss out on it because just like me they will think the premise is just laughable (i don't blame them).
--
Latest creations: Fallout NV: A Wasteland in Bloom / Fallout NV: WFO v3.5
Quote

December 17th, 2018, 01:28
Tons of people won't miss Aquaman because whatever you think. They'll miss it because they don't want origin stories about each and every comic superhero out there. They want something else and that something is most dangerous supervillains appeared in superheroes comics.
Tons of people are waiting. Patiently. For this.


Comics to Read Before You Die #27: Fantastic Four “The Trial of Reed Richards”

“The Trial of Reed Richards” is a morality tale, told on the grandest scale; sometimes you might hear it referred to as the Trial of Galactus, even though Reed is on the one on trial.

Sorry for bad iphone quality, pic proof made this minute with ofc drakensang so you know it's not copypasted from someone else's comic collection. 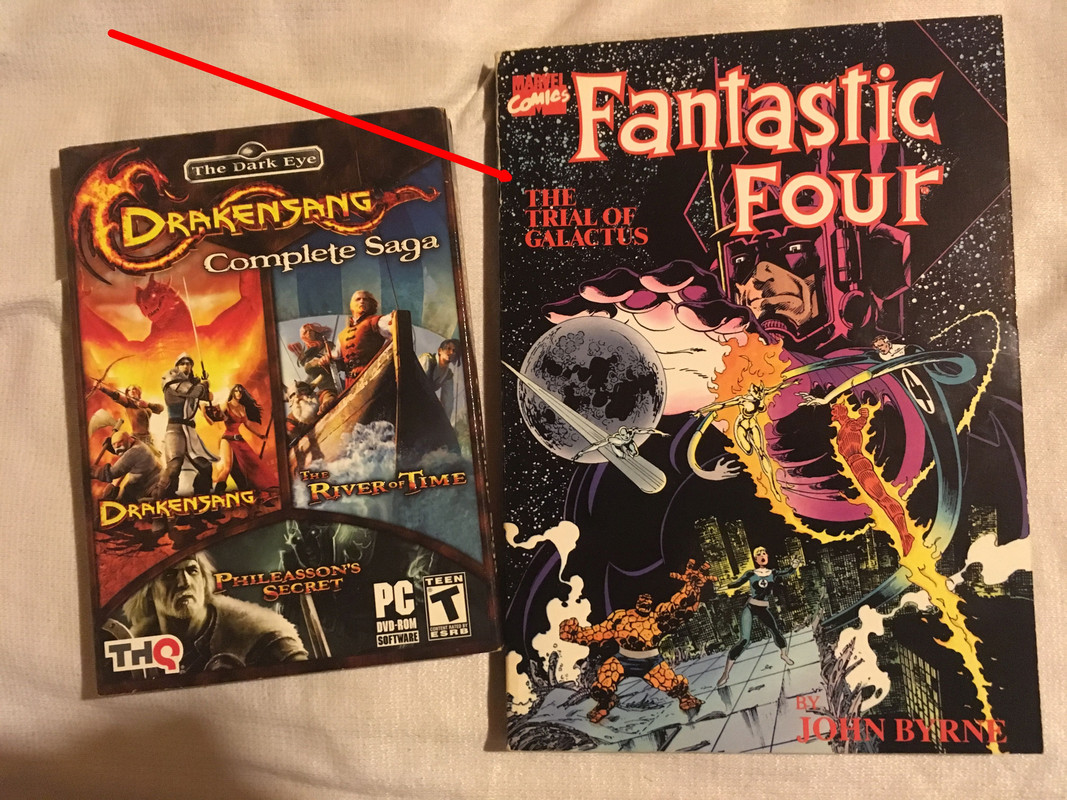 Note that Black Panther, F4 and Galactus are Marvel's characters.
Aquaman is DC's. Galactus is on the level with possibly the most powerful DC's villain - Darkseid.
But… It's not about tastes. It's about blissful ignorance I guess.

I mean, why are you watching those movies? Because it's currently mainstream like using reshade malware with even games that don't need it? I hope not. Plenty of us who enjoyed comics for decades are now enjoying all those strips CGIed into crazy action scenes packed with modernized fantasy stories.
Some of movies are faithful to the source and rock. Some are not and suck. Black Panther managed to hit the target. Perfectly. Don't believe me? Ask anyone who knew the character before his appearance on screen.

Maybe I can explain it better if I bring back my opinion that Peter Jackson's Tom Bombadil, IMO, is a failure of biblical proportions. A failure as in Jackson's world that entity doesn't exist. Then again, I've sadly read the books trilogy before watching movies. Hollywood wishes I didn't - as I cost them $, youngsters talking to me get suggestions not to watch that crap. Ever. Yea yea, I know, it's just a few bucks and they don't care. Am I guilty for fighting against windmills alone?
--
Toka Koka
Last edited by joxer; December 17th, 2018 at 01:58.
Quote

Is that a remake of this one?
The House That Jack Built

God, no. It's Lars Von Trier's latest. Von Trier doesn't remake shit (and that really does look like shit posted in your link). Love him or hate him (or love him AND hate him since I've been cold on some of his films), he's an original
Quote

The House that Jack Built 7.5/10. As dark and twisted as you can expect (and often beyond that) had some funny moments too. A bit long.
--
Latest creations: Fallout NV: A Wasteland in Bloom / Fallout NV: WFO v3.5
Quote

December 18th, 2018, 21:10
Never heard of this one, but thanks to news about it's "unban" from USA theaters I'm now eager to see it. Where… Nowhere most probably which means importing DVD from Russia (yes, they have it) or some asian online shops and then finding some silly fansubs, arrgh.
36.15 code Père Noël aka Game Over aka Dial Code Santa Claus (1989).


Dial Code Santa Claus, a French Christmas/action/horror film, is getting its first-ever U.S. theatrical run thanks to the American Film Genre Archive and the Alamo Drafthouse. The 1989 cult classic pre-dates Home Alone, and features two kids who are forced to defend their home from a deranged killer in a Santa costume. You can check out the trailer in the post below!

The film disturbed both critics and the moviegoing public with its disturbing portrayal of the Christmas season. After becoming something of a sensation in France, the film went on to worldwide distribution. Except in America, where Dial Code Santa Claus was only available as a VHS bootleg.

The AFGA did a 2K restoration of the film, capturing its unique look of a vintage MTV video and blending holiday cheer with the shock of a home-invasion thriller. Filled with dark surprises every few minutes along the way, Dial Code Santa Claus’s crisp visuals and spooky atmosphere are sure to be a hit for those who are partial to non-traditional Christmas movies like Gremlins and Die Hard.

Those who will take the bait, some "required knowledge" from imdb comments:

Thoughts anyone?
--
Let it be said the Court of Public Opinion is all About Mob Justice not Law & Order"
Quote

Didn't they already reset it? From fairy tale for adults they went extreme dumbing down to kiddie level.
It needs returning to roots!
--
Toka Koka
Quote

The House That Jack Built (2018) is brilliant, with some fine pitch black comedy that had me roaring with laughter. I have nothing more to say, except WATCH IT!

God, no. It's Lars Von Trier's latest. Von Trier doesn't remake shit (and that really does look like shit posted in your link). Love him or hate him (or love him AND hate him since I've been cold on some of his films), he's an original

Yeah, I saw this! I'd be more on the "love him" side of things. I was looking forward to it for ages.

I didn't love it, though.

Obviously its a very well made film, but I'm not really into serial killers and found my reaction was mostly neutral where Melancholia left me feeling like I'd been though a real experience.

Jack felt more like Lars copying his own style and picking serial killers as the topic just to be edgy. It had the two voices telling the story like Nymphomaniac and a sort of screenplay feel like his film with Nicole Kidman and the weird set. Then a bit of the artsy slow-motion stuff from Melancholia toward the end when things finally start to get interesting in time for the movie to end.

I'd probably still give it 4 stars.

I want to see Climax from Gaspar Noe, too. Seen that one yet?

December 21st, 2018, 14:24
The House that Jack Built is one of those movies that when i think back of it now i like it more than i did directly after. It takes a while for it to sink in. It's probably my favorite Trier next to Idioterne..
--
Latest creations: Fallout NV: A Wasteland in Bloom / Fallout NV: WFO v3.5
Quote

December 21st, 2018, 15:50
I'll probably give it another watch. I hear the unrated version is coming out at some point too but I'm afraid to imagine what happened with Simple because it did seem like a very sharp cut. I wouldn't be surprised if it was the most messed up scene in the movie but had the last 5 minutes cut out.
Quote

December 21st, 2018, 21:38
I remember having an anxiety attack watching Melancholia during the scene where the planet first brushes past and penetrates the Earth's upper atmosphere and "takes a little bit of the Earth's air" with it. I felt exactly what the characters on screen were feeling. It was weird. Talk about an experience! The thing I loved most about The House That Jack Built was its humor, and how it satirized how incredibly stupid serial killer victims could be be. I remember Henry Lee Lucas once saying in interview that sometimes all he had to do to gain access into someone's home was show up at their door and ask for a drink of water. The House That Jack Built felt like American Psycho done right. I can't imagine what an unrated version might be like because just the theatrical release was pretty fucking rough.
Quote

VADER EPISODE 1: SHARDS OF THE PAST - Star Wars Theory FanFilm Anakin Skywalker is DEAD. For eight months, the mysterious Darth Vader has enforced the Emperor's commands. Fighting between the loss of Padme, and the new cursed life he now leads, Vader must do what must be done when a surviving Jedi Master from Order 66 has lured him to the home planet of his late Wife's tomb

This is what StarWars should be Disney.

December 23rd, 2018, 01:45
Felt like watching more Trier so i watched Melancholia again. I saw it when it came out, years ago and i didn't particularly like it then.

It never really takes off in any super interesting direction, it's very evenly paced. Some of the characters behaviors and dialogue feels really fake and off. He could have done something interesting with the one kid in the movie, but as the end draws near he just sleeps, like they didn't dare going there.

Sounds like i hated it but it did really manage to capture me more this time. A hard movie to score i think. The overall feel of it is great.
--
Latest creations: Fallout NV: A Wasteland in Bloom / Fallout NV: WFO v3.5
Quote

December 23rd, 2018, 02:47
Since it looks like we'll never see the Kill Bill saga combined as one film, I re-watched them both over the past two nights. Not Quentin's best movies, but certainly worth watching!! I'd not seen either in over ten years, so it was long overdue. Now, if he could just do what he said he would about making them one film, or better yet a sequel, I would be an extra happy camper.
Quote

December 23rd, 2018, 03:01
I thought Kill Bill was just "ok" by Tarantino standards. Volume 1 was, imo, the better half by far. Overall though, I think it ranks far behind films like Pulp Fiction, Reservoir Dogs, and Inglourious Basterds.

He has a new film coming out next year called 'Once Upon a Time in Hollywood'.
Quote

December 23rd, 2018, 14:05
Didn't care for kill bill; but some of his other movies are better. He did a western that was brutal; and inglourious basterds wasn't bad.
Quote

December 23rd, 2018, 14:45
I liked Kill Bill Part 2 much more than Part 1. Centered on storytelling and characterization more, and wrapped things up nicely. Part 1 was very cloying in its long, interminable action sequences.
Quote

December 23rd, 2018, 14:53
One of the great awkward moments in the history of motion picture publicity was Lars Von Trier at Cannes on a panel with the cast of Melancholia taking questions. He said he liked the Nazi philosophy and that he was a nazi at heart, and admired Hitler. Kirsten Dunst beside him looked like she wanted to die, poor thing. Realizing his blunder, he then said something I thought was pretty funny and added some levity to the otherwise truly cringeworthy moment: "Um, how do I get out of this sentence?" He was banned for the remainder of the festival.
Quote

well at least i've never contributed with any money to anything he's done. I like his work but anyone anti-israel is a total scum in my view, usually hardcore nazis or lefties and conspiracy nuts.
--
Latest creations: Fallout NV: A Wasteland in Bloom / Fallout NV: WFO v3.5
Quote