The Darkness Below: a retro CRPG in the making

October 4th, 2020, 17:53
I really like what I see here, it evokes good memories of Eye of the Beholder and Lands of Lore, and a few others. I'll truly be picking this one up in the future, and thanks for keeping us updated on the progress!
Quote

I really like what I see here, it evokes good memories of Eye of the Beholder and Lands of Lore, and a few others. I'll truly be picking this one up in the future, and thanks for keeping us updated on the progress!

Thanx!
I am doing my best to have this as visually appealing as my skills allows (not a designer), although a lot of work is hidden at the moment, like the rulebook being written, the battle, spell & event system, movement etc. all of which will be uncovered in a proper demo. The current state of game is a lot closer to that now, with the aforementioned changes.
--
Check my Patreon
Quote

November 2nd, 2020, 07:59
New update!
I worked a lot on ground items since they play a major role (graphically) on realism and there are about 25-30 in the game.
Not lazy stuff, all those are models converted to pixel & shadowed. I'm not a modeller so this consumed a lot of my time to get them done.
Not final, but the major part has been done. Some items will be reworked and/or replaced.
Elsewhere, i reworked my title screen, designed my new navigation cursor, implemented a new lever (DM inspired) & changed my fonts on character window.
Nothing fancy but a necessary step to technical completion that a demo requires.
There are still some lighting issues on the world (mainly walls). I will deal with them in time.
Hope you like it & add some feedback. Check some images: 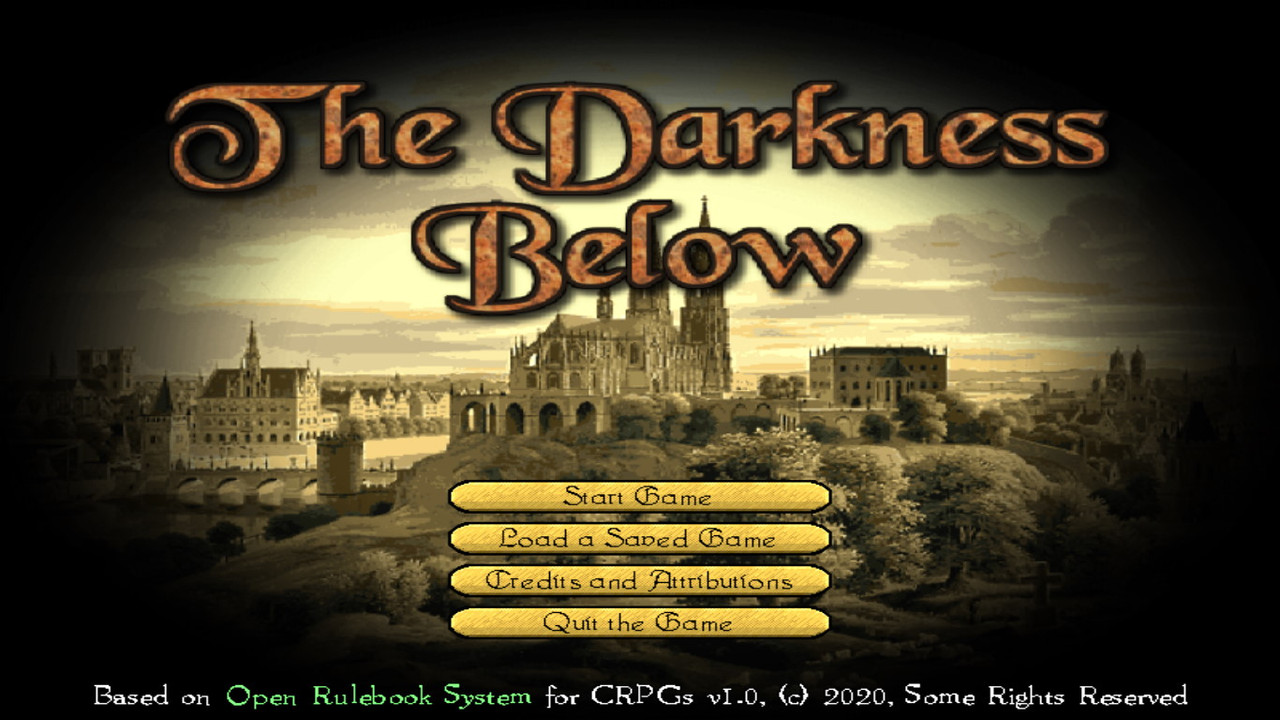 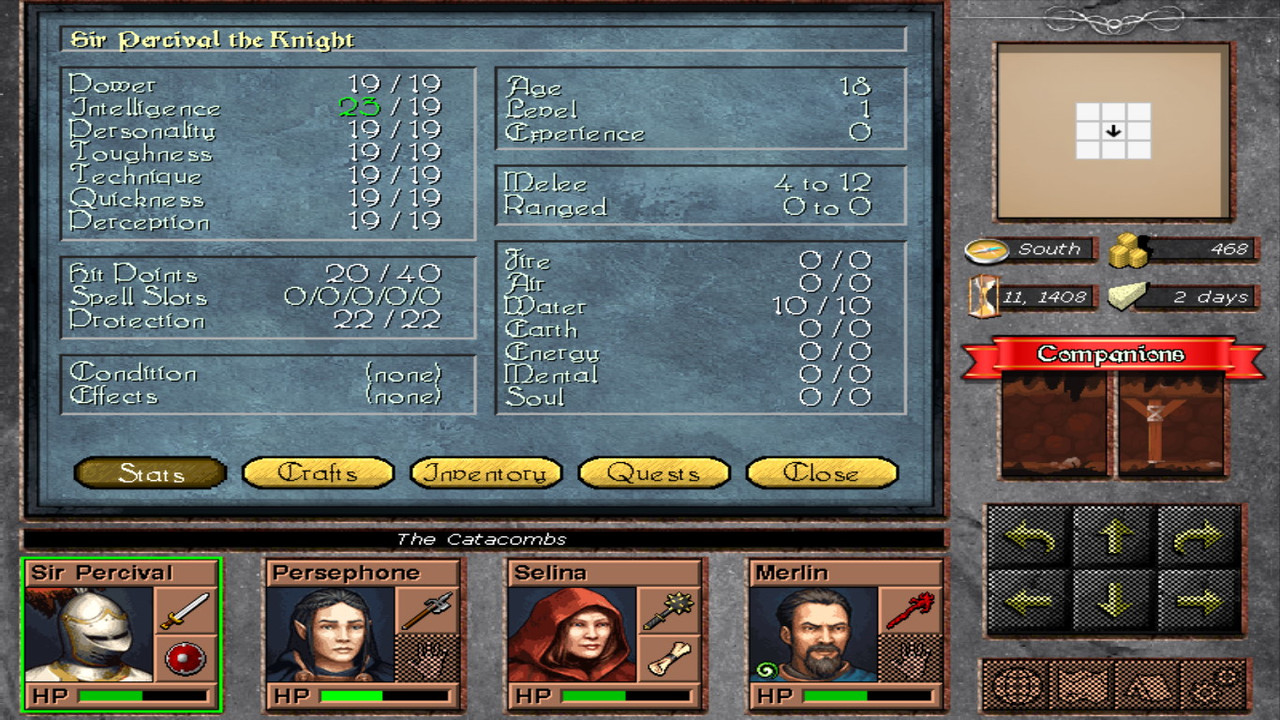 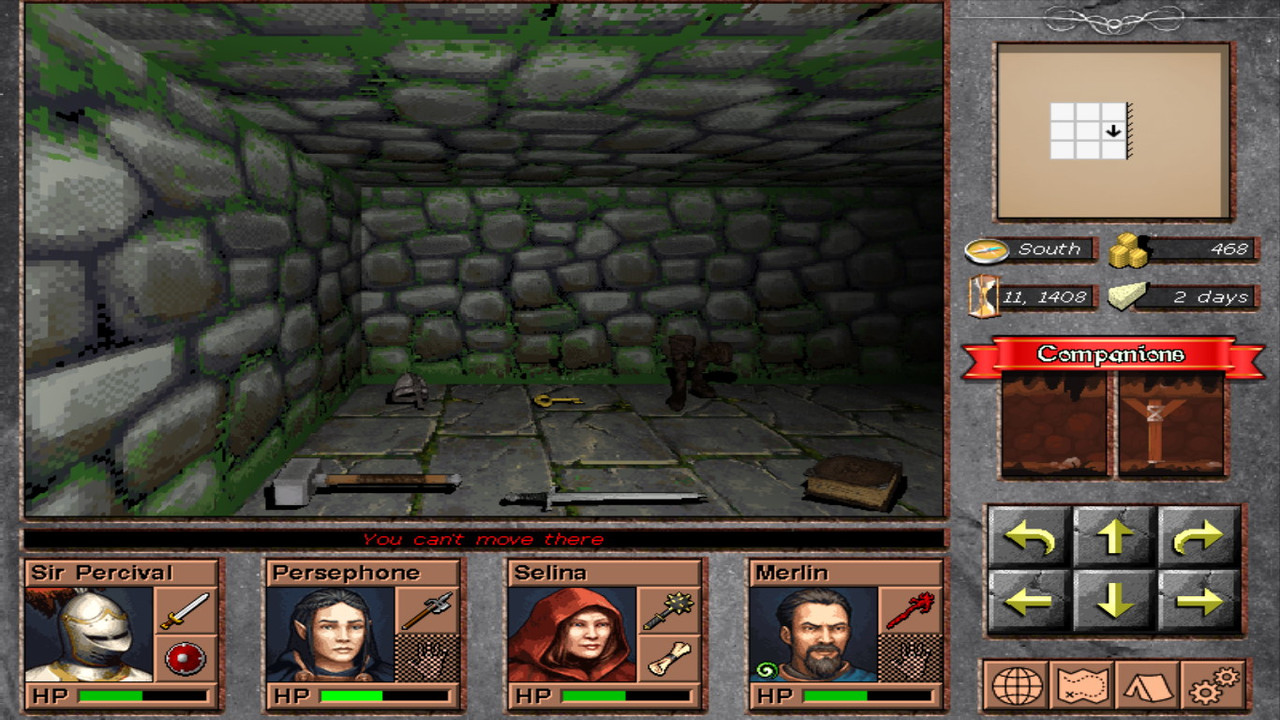 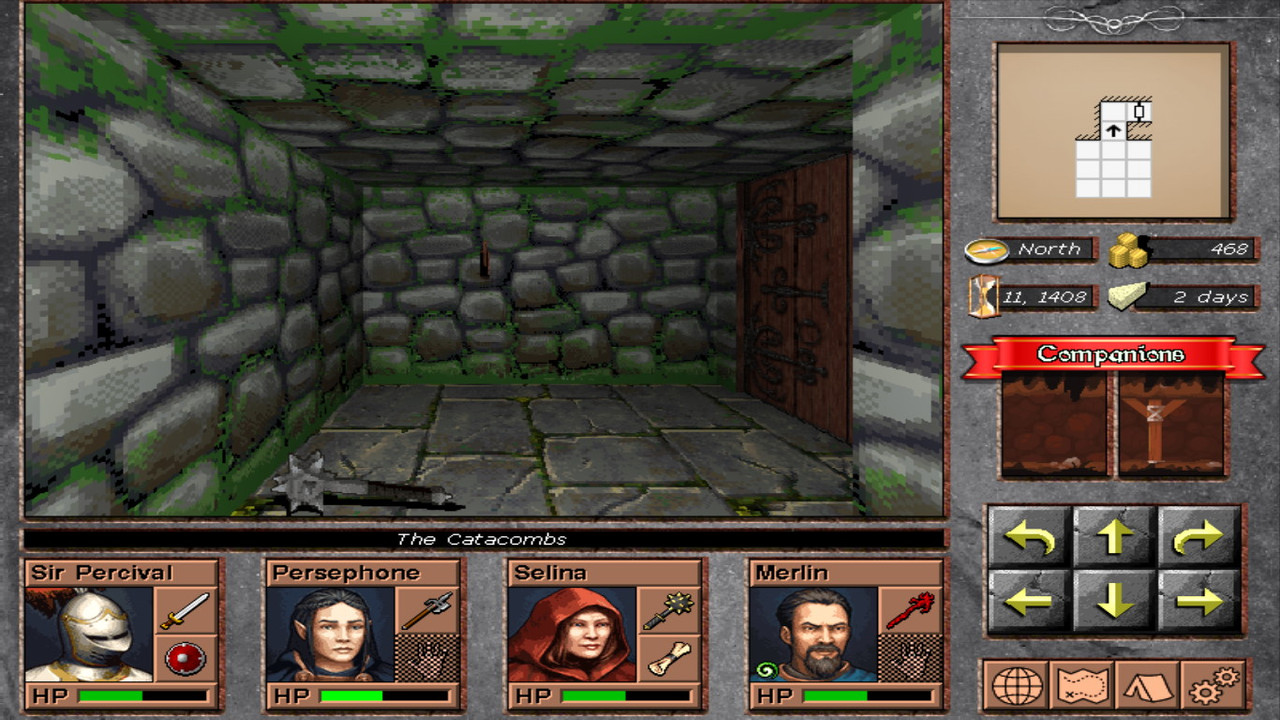 Man, that's looking really nice! Keep up the good work, this is something I'm looking forward to!

Thanx man, i appreciate it

Things are going well & a proper demo is not that far..
--
Check my Patreon
Quote

Looking forward to playing this.

Thanks man!
--
Check my Patreon
Quote

December 3rd, 2020, 09:43
Another update which took a little more than usual, still fixing / completing the technical part.
Highlights of the update are:

Reworking of the keylock system.
I decided to move the locks to the doors instead of having them stick to random walls, mostly for practical reasons. Otherwise, i would be forced to add a new keylock / lever for each door. Now each door can either have a lever handle / keylock attached or nothing at all.

Reworking of stairs.
Added more depth to them, plus some graphical variety which matches the floor being used.

Quest system.
The journal contains all the quest information, their state (active, complete & failed), plus some statistics which shows the general progress. The All statistic is a useful statistic for the player to know how much of the game's content did solve. Finally, there's a description showing all the fine details of the quest. NOTE: those quests are just a sample from the great game Exiled Kingdoms, they don't belong to game's content.

Finally, i added 2 types of chests, removing the previous low-res type. They occupy an entire square and its mechanism resembles the one used in Lands of Lore, Anvil of Dawn etc. a click on them retrieves an item from the chest.

Check a number of images: 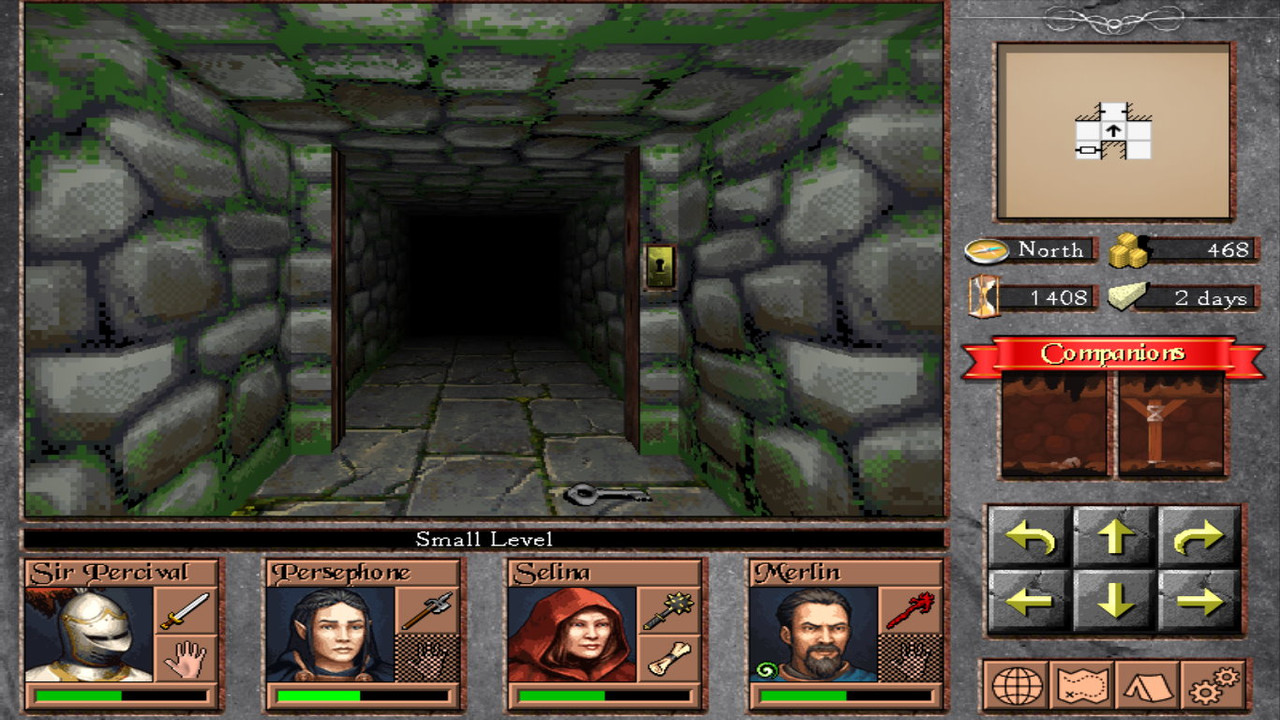 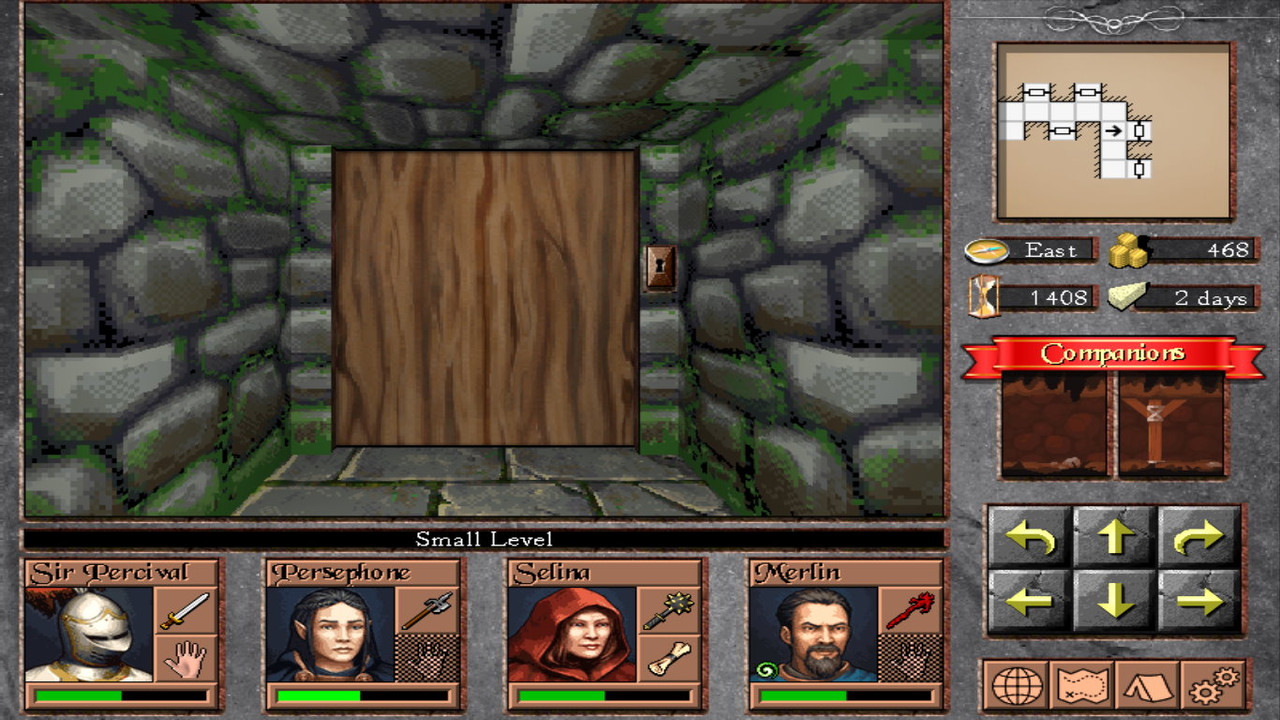 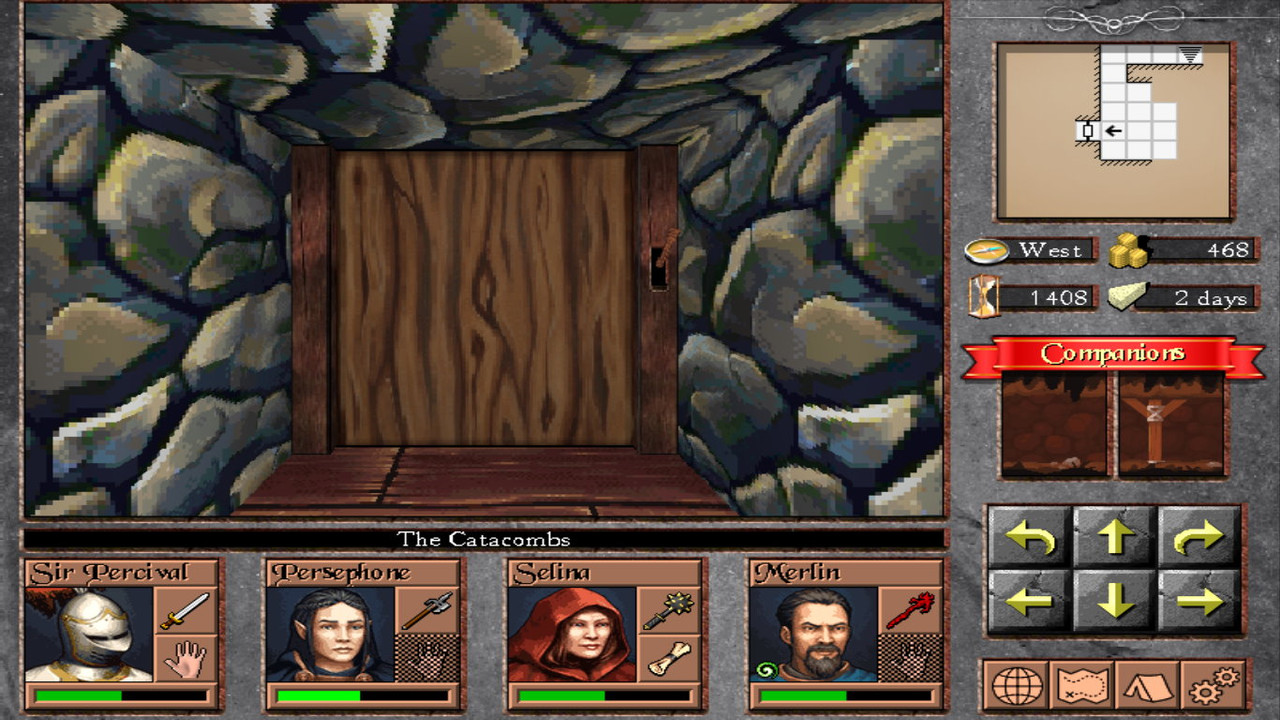 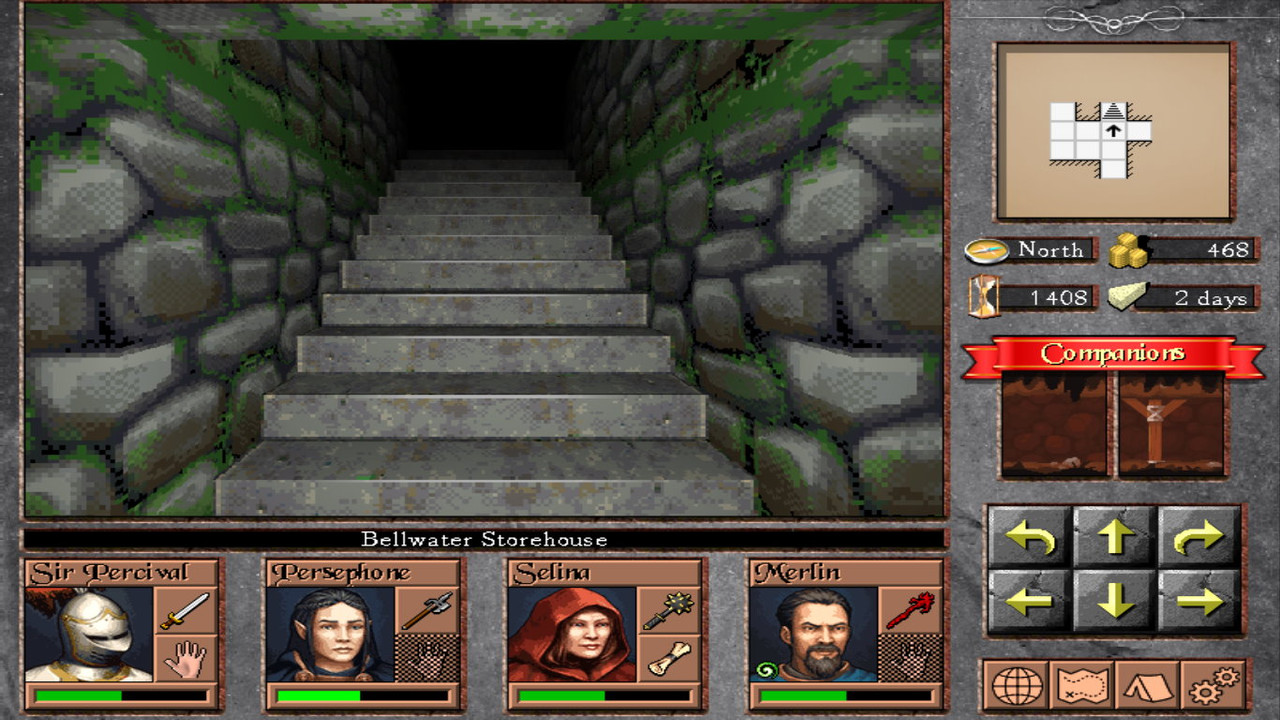 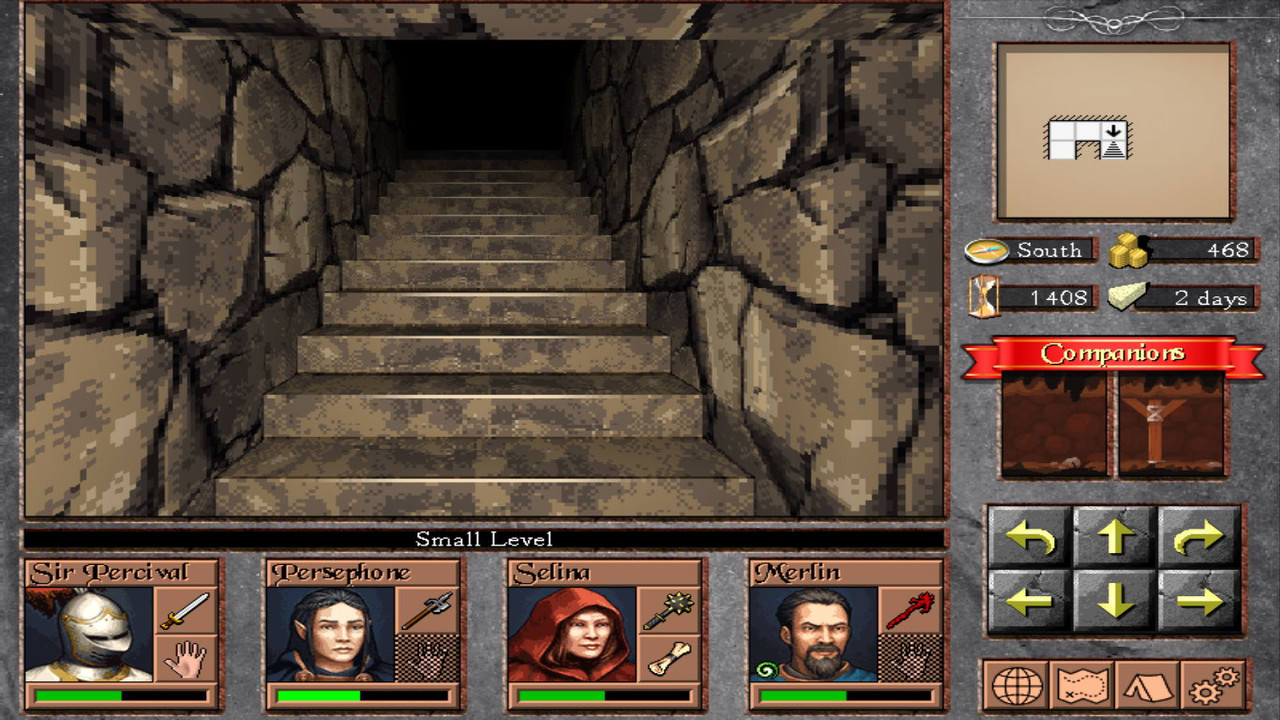 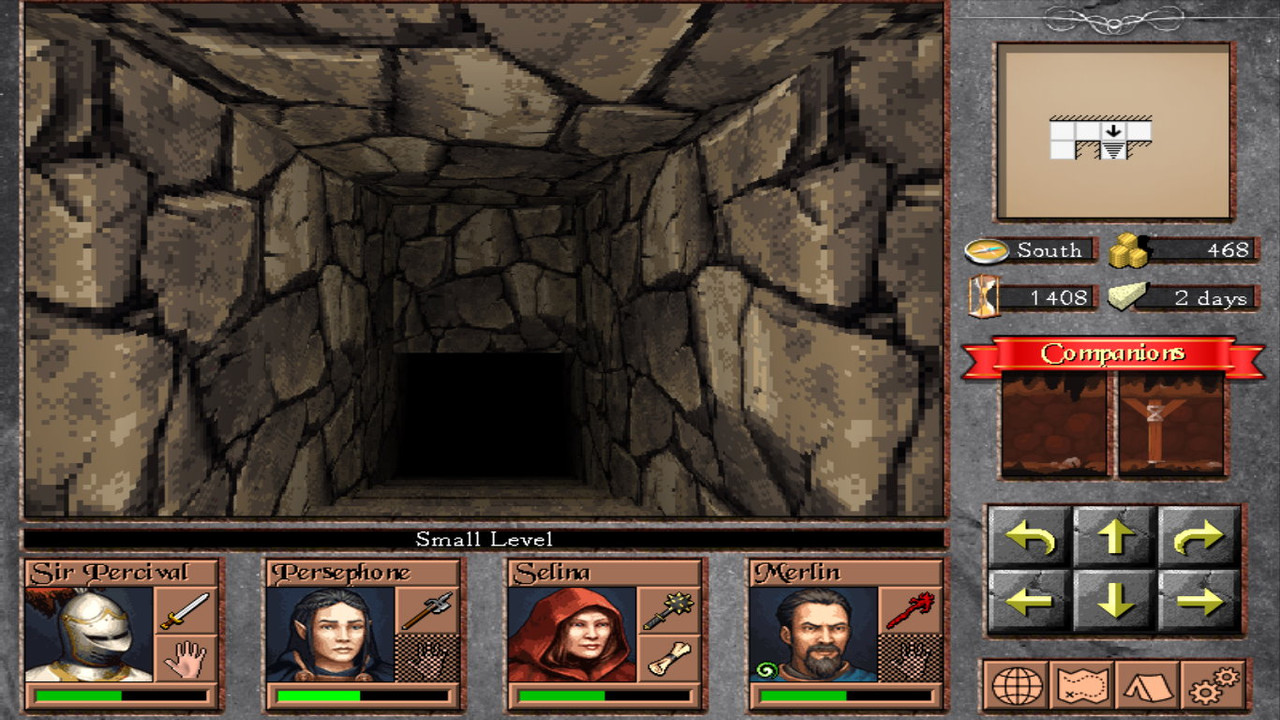 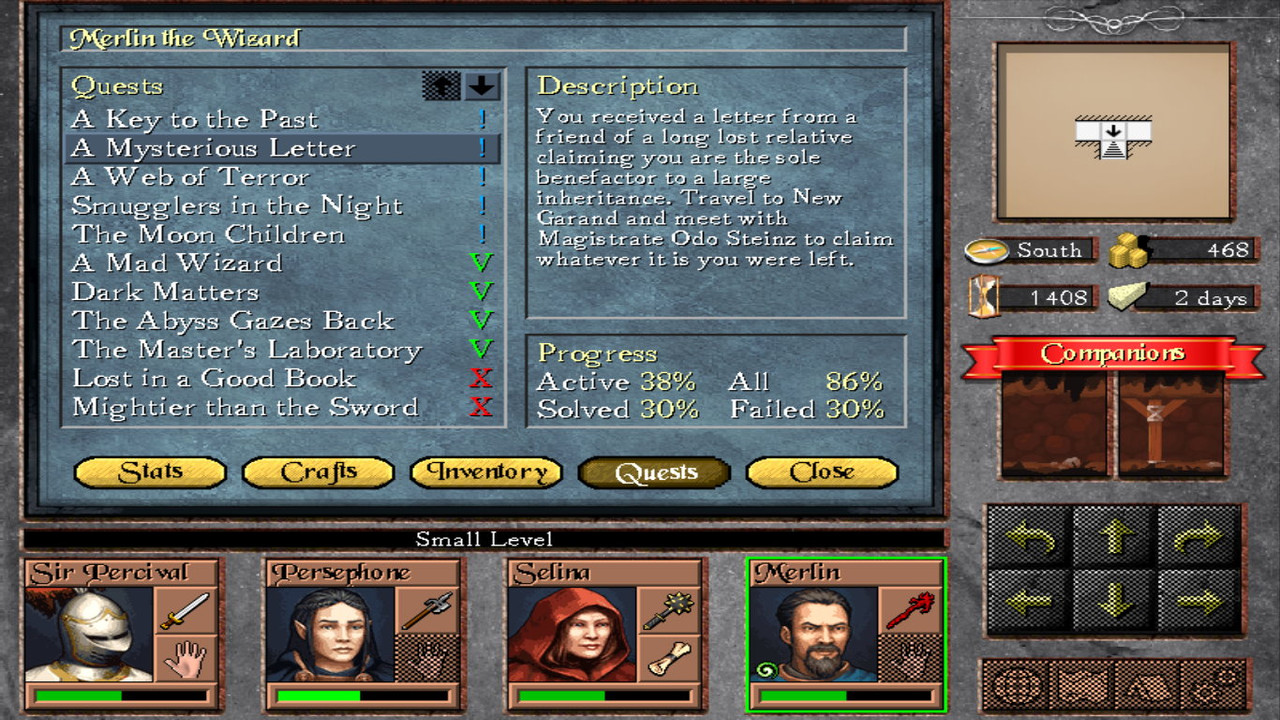 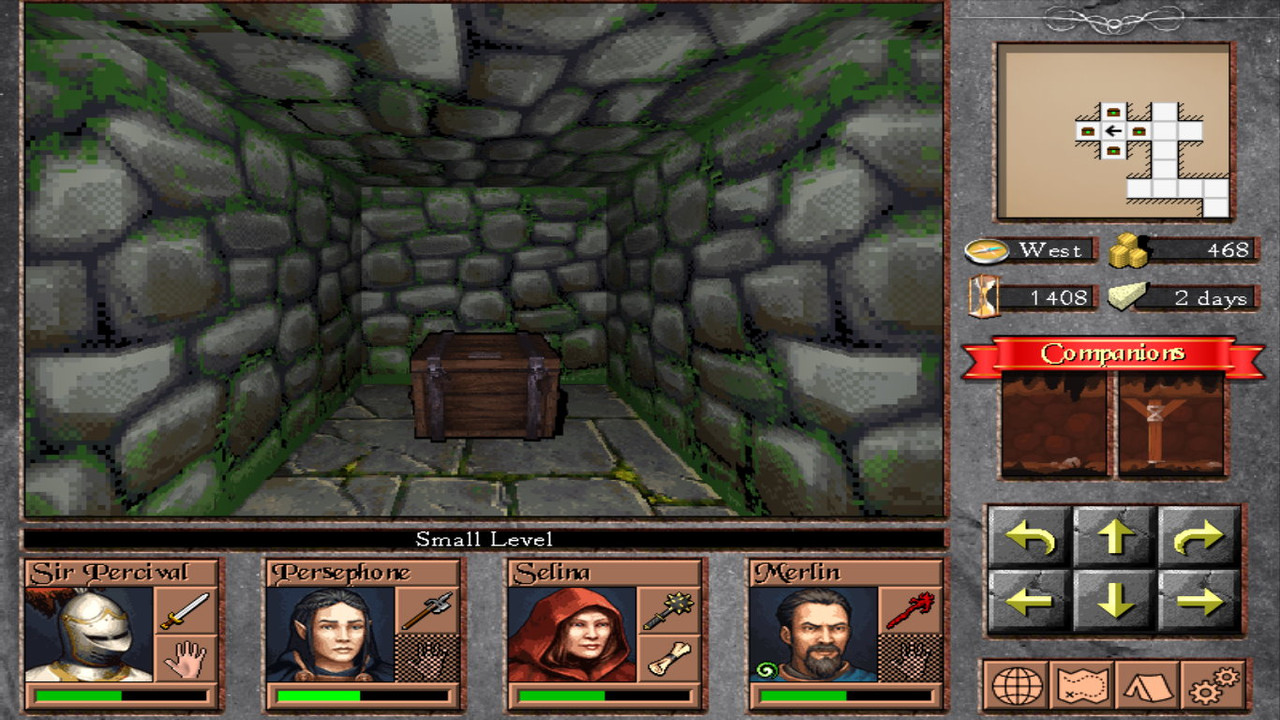 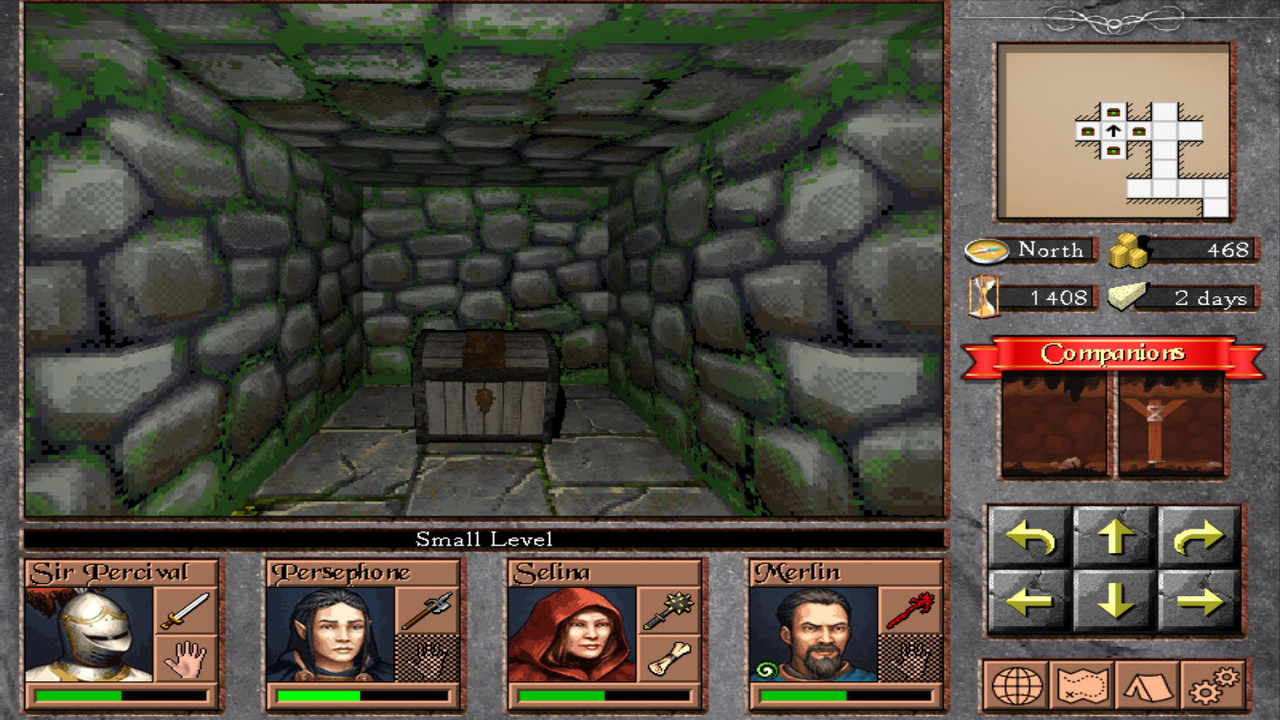 That's all for a month's work :-)
Hope you like it
--
Check my Patreon
Quote

I do like it, man. Every shot I see of this just makes me even more eager to play it! Keep up the great work.

Thanx man, I will certainly do it

January 10th, 2021, 19:46
Yet another update.
On this update i mostly focused on required refactoring / performance of code, which i hope justifies the increased delay q

I also worked on improving exterior areas; hopefully they're now on par with interior areas.
Finally, i revamped my options / save system, allowing unlimited save slots / pages & thumbnails because who likes one or three slots.
Check the following images: 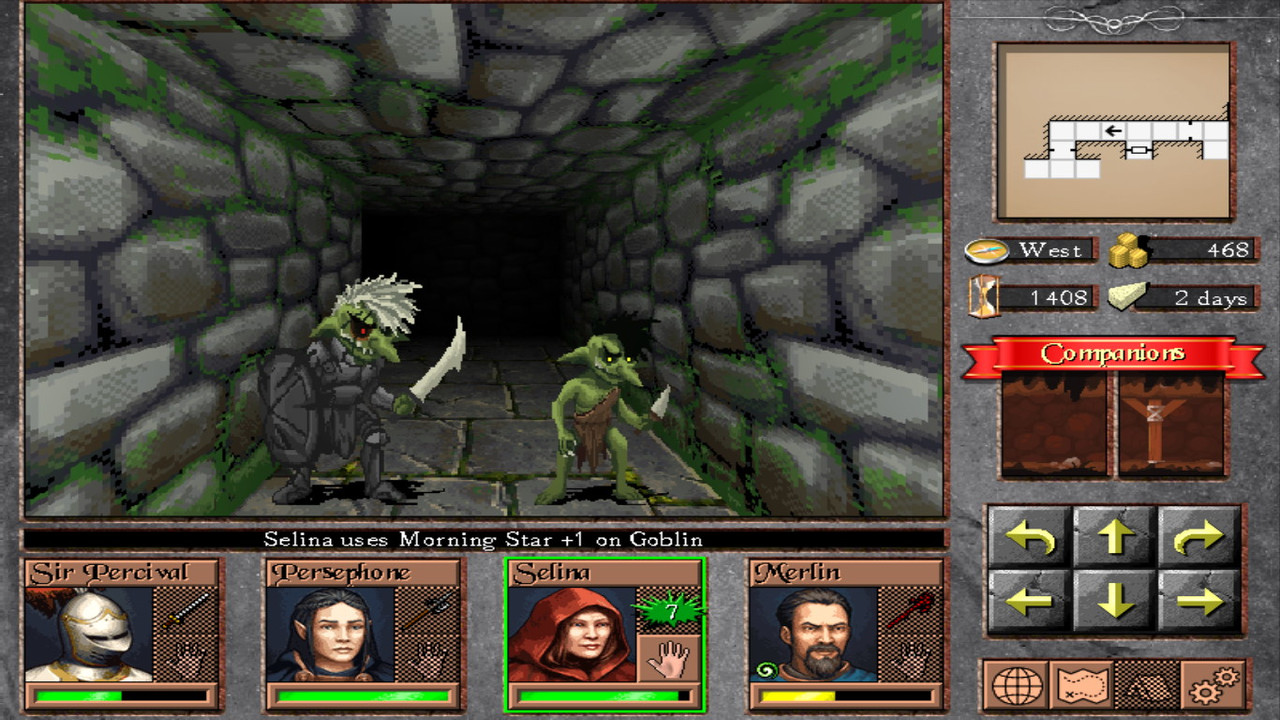 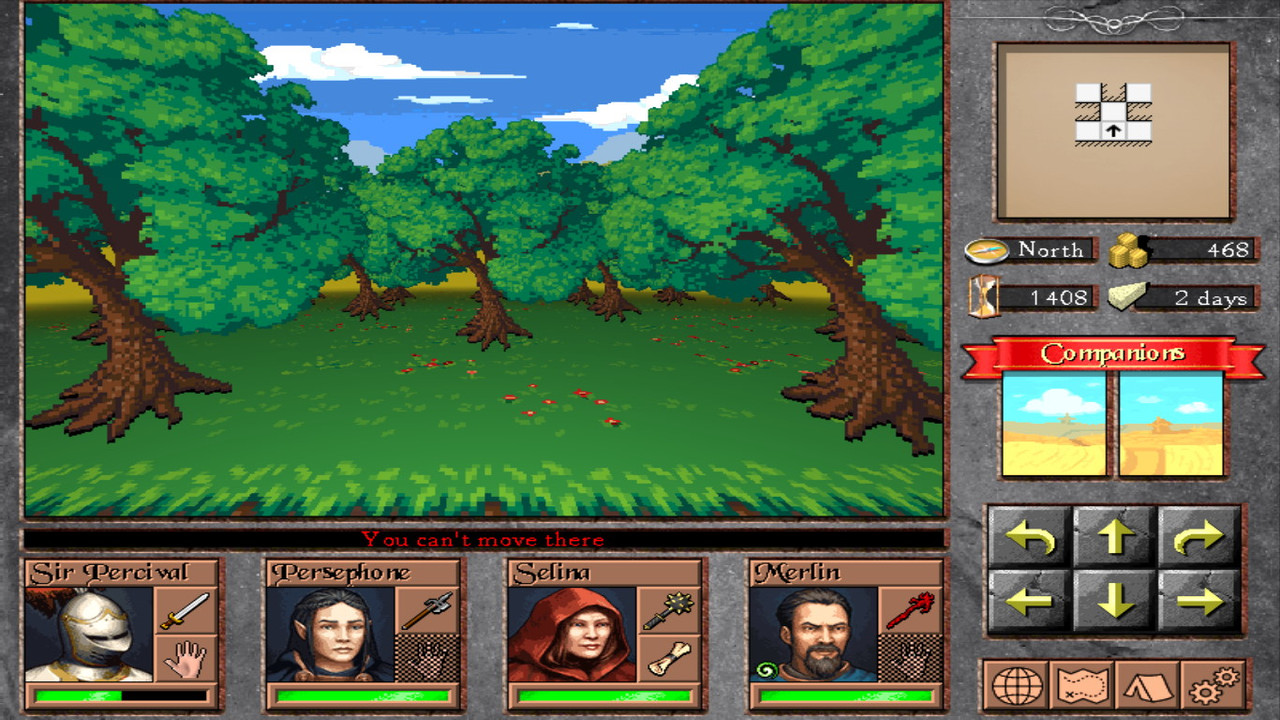 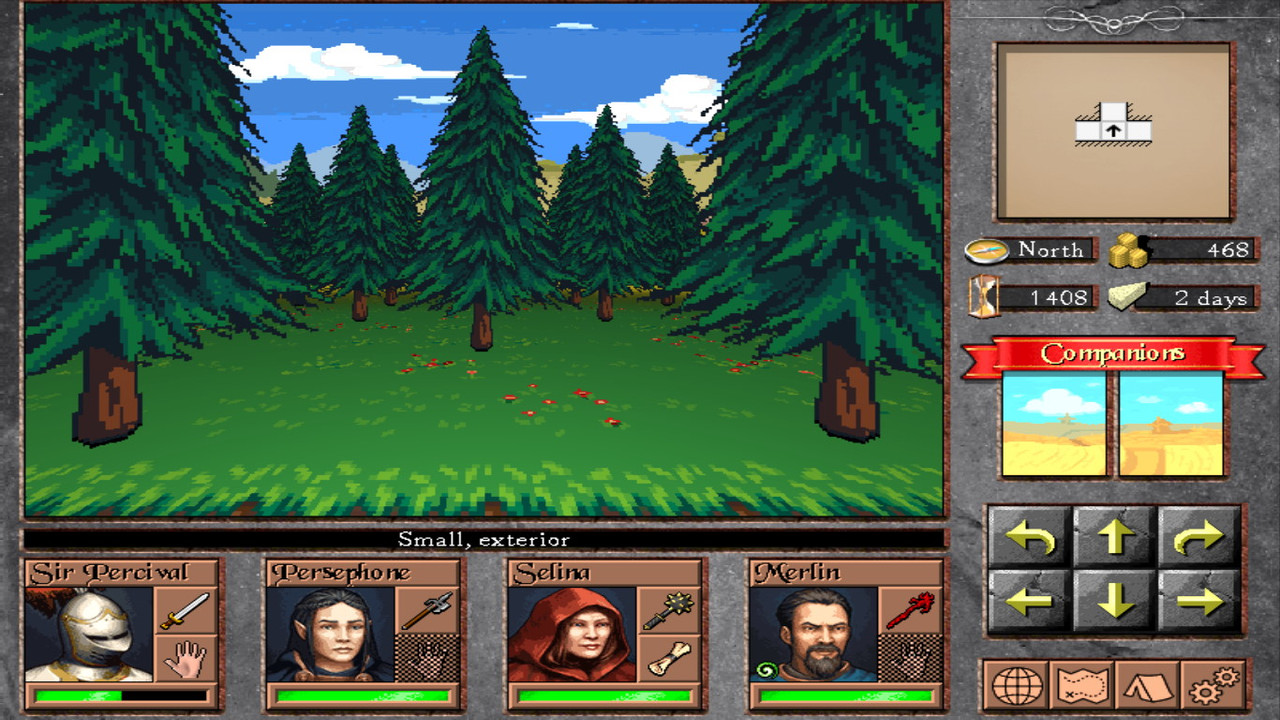 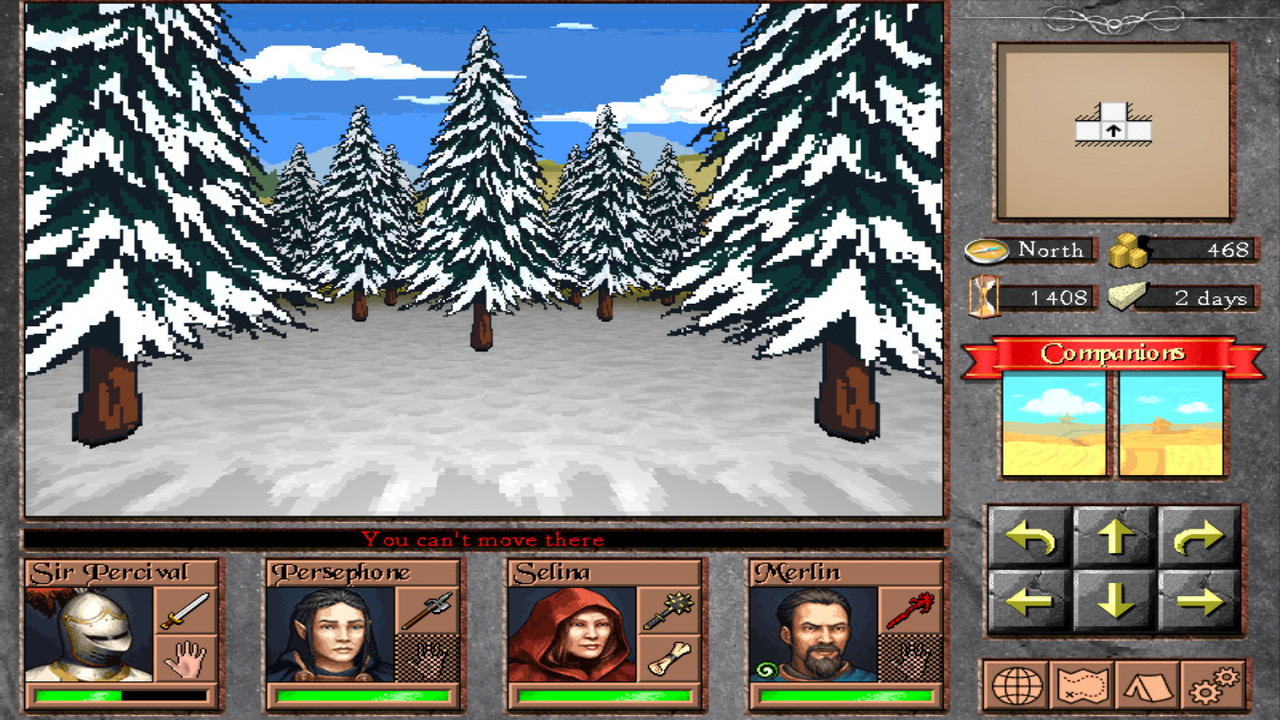 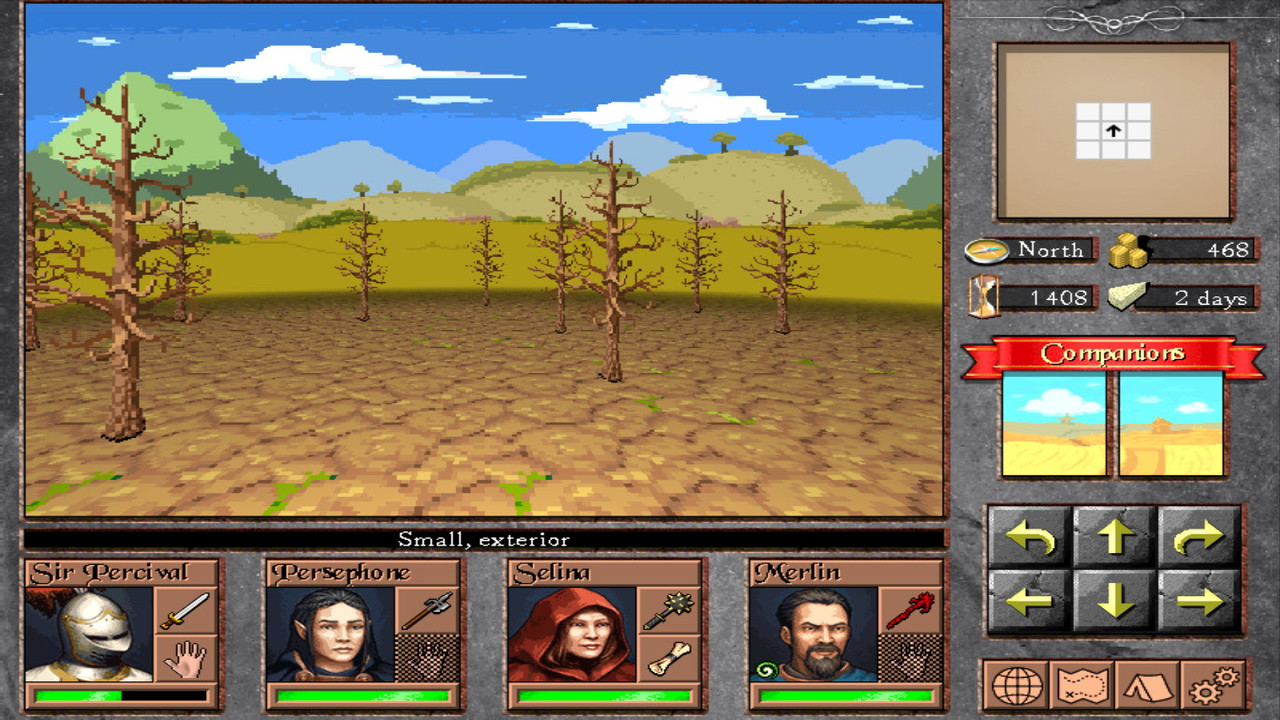 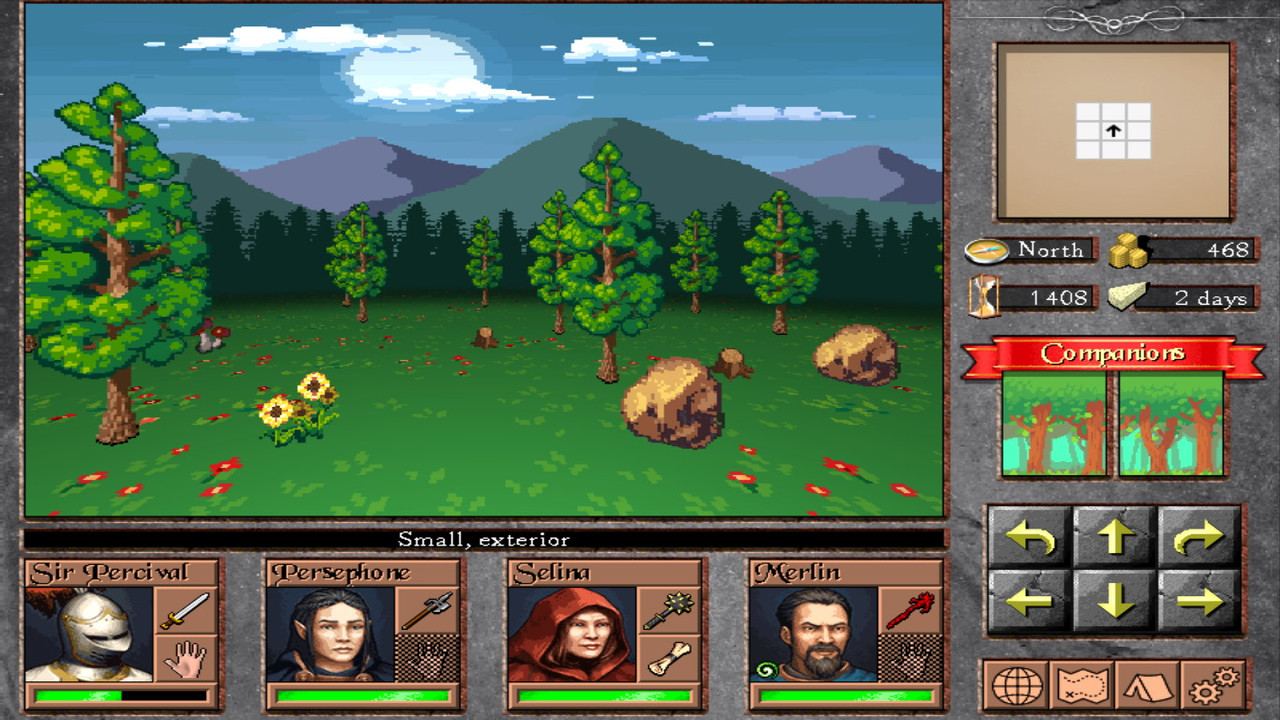 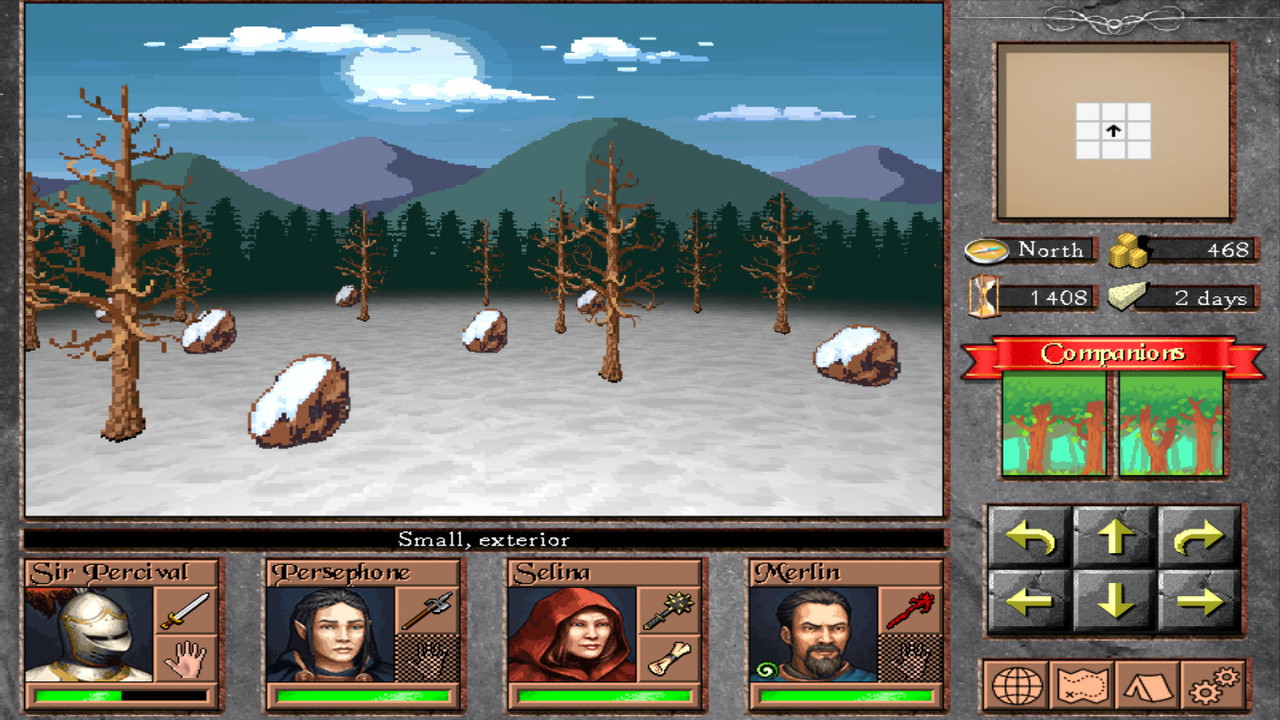 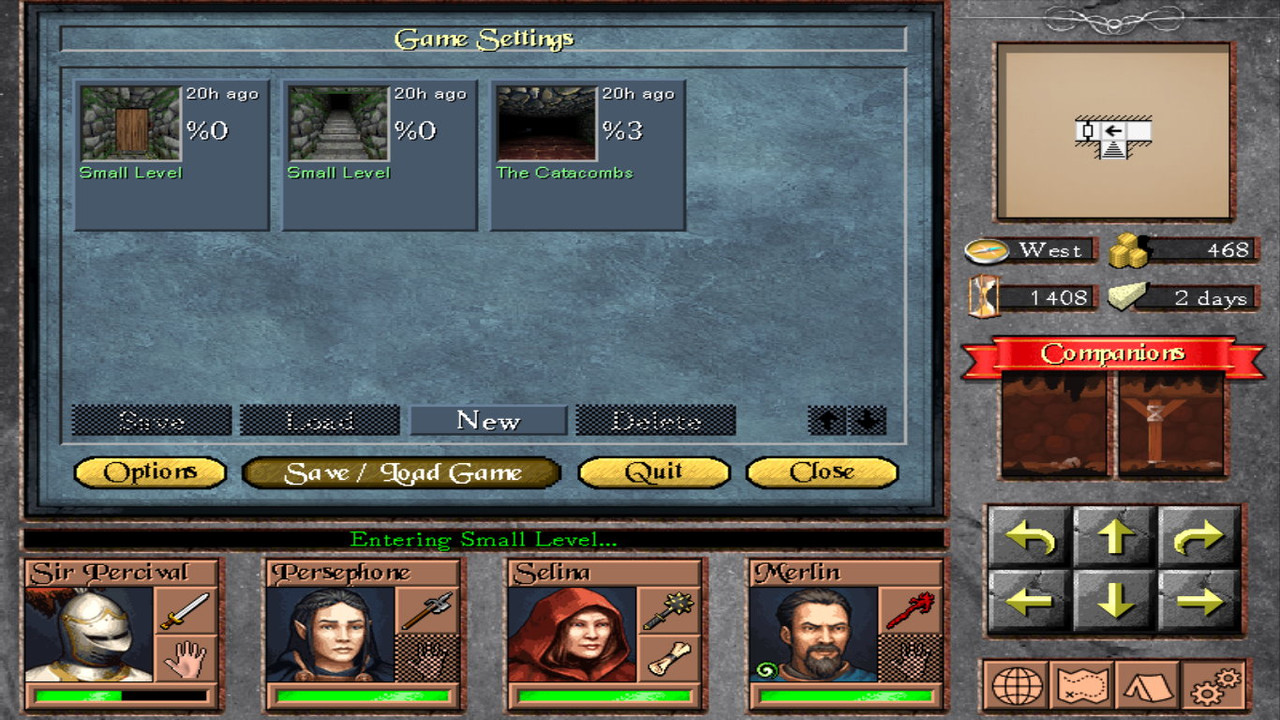 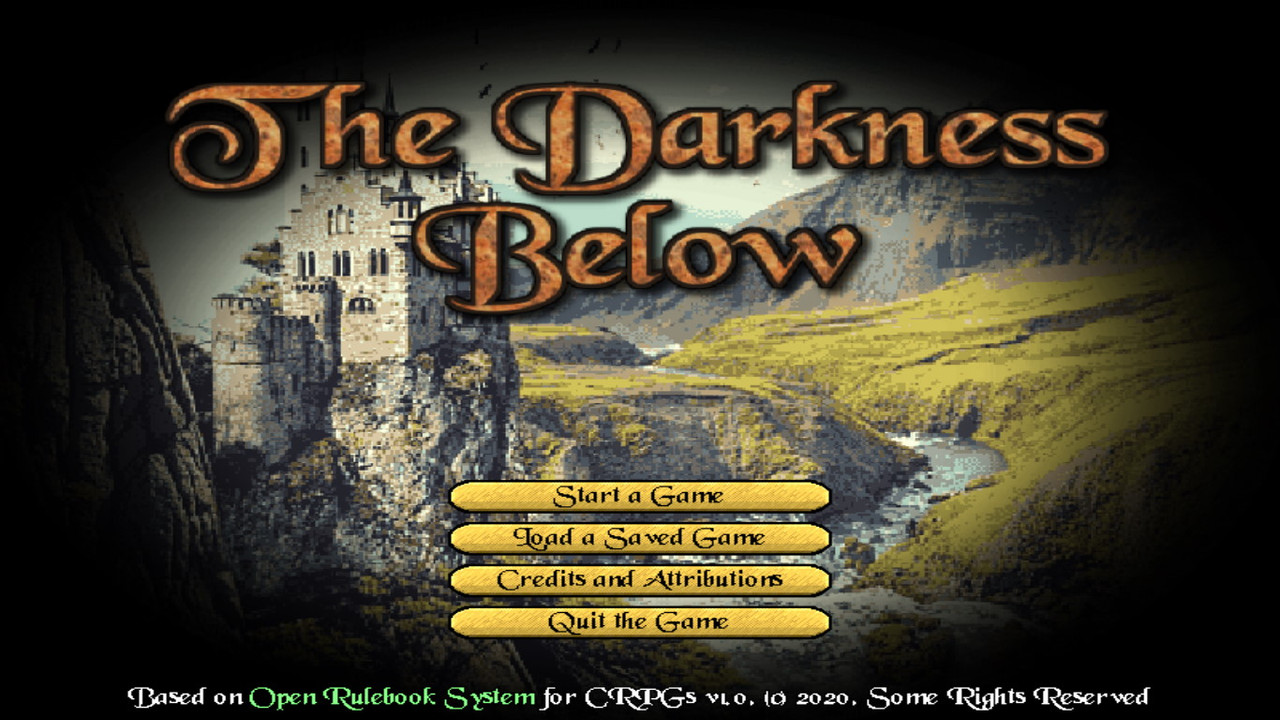 Ok, that was it.
The next update might be a demo.
--
Check my Patreon
Quote

I just don't think that they match too well.

The landscape looks very comic-style.
The characters a bit more realistic, but still somewhat fit.
The interface also seems to fit to more to the characters.
Until you open the Game Setting menu. That one still fits somewhat to the characters but is already too far away from the landscape comic-style.
And the title screen looks like a digitized photo, which maybe fits a bit to the game settig menu, maybe a little bit to the characters, but it's on the complete opposite spectrum compared to the world graphics.
--
Doing Let's Plays Reviews in English now. Latest Video: Wasteland 3
Mostly playing Indie titles, including Strategy, Tactics and Roleplaying-Games.
And here is a list of all games I ever played.
Quote

January 10th, 2021, 23:51
looks fantastic, man! can't wait to play! love the genre and the graphical style is quite beautiful regardless if you aren't that type of artist first. cheers!

I just don't think that they match too well.

Thanx for the useful feedback & good words. I'm continually working to match appropriate graphics for everything, though newer features might still require additional visual love. I still implement time-consuming functionality and graphical perfection is out of my plans at the moment, just what improves on last attempts seems good enough to move on to be able to provide a working demo in time. I'm always open to constructive criticism, especially if those criticisms comes from numerous people.

looks fantastic, man! can't wait to play! love the genre and the graphical style is quite beautiful regardless if you aren't that type of artist first. cheers!

Thanx man! Glad you're liking it in its current state. I'm working hard to a fully functional demo to gather a complete feedback.
--
Check my Patreon
Quote

Agreed, those shots looks quite good, I'm chomping at the bit to think of when I'll get to play this game!!

Thank you! I'm doing my best to get this out as fast as I can. I still need to iron some annoying technical issues but mostly certainly the next update will be the demo.
--
Check my Patreon
Quote

I invested a lot of the time fixing bugs, refactoring and gradually making the game more flexible & crawlish. Those things should had been fixed before any kind of demo. Sadly, I still don't have a demo. However, fear not as I already started working on my itch.io page…
Fixes:
* fixed audio bugs, mostly on Android; implementation of JIT audio loading/playing/releasing because OpenSL ES is just too restricted.
* Restructuring of camera's perspective & playing with vanishing points to allow greater visibility of ground items on current party's square.
* Minor fixes to minimap
* Lots of fixes to event system
* Replacement of old NPC graphics with new ones (centaur & cart), which should elevate the crawlermetric of the game; more investment on pixel-art & software.
* Ground items are finally completed; really a milestone as there are around 25+ different variants, each one carefully modeled & converted to pixelart.

and a lot of more errors that I'm quite lazy to write about.
Enjoy the images: 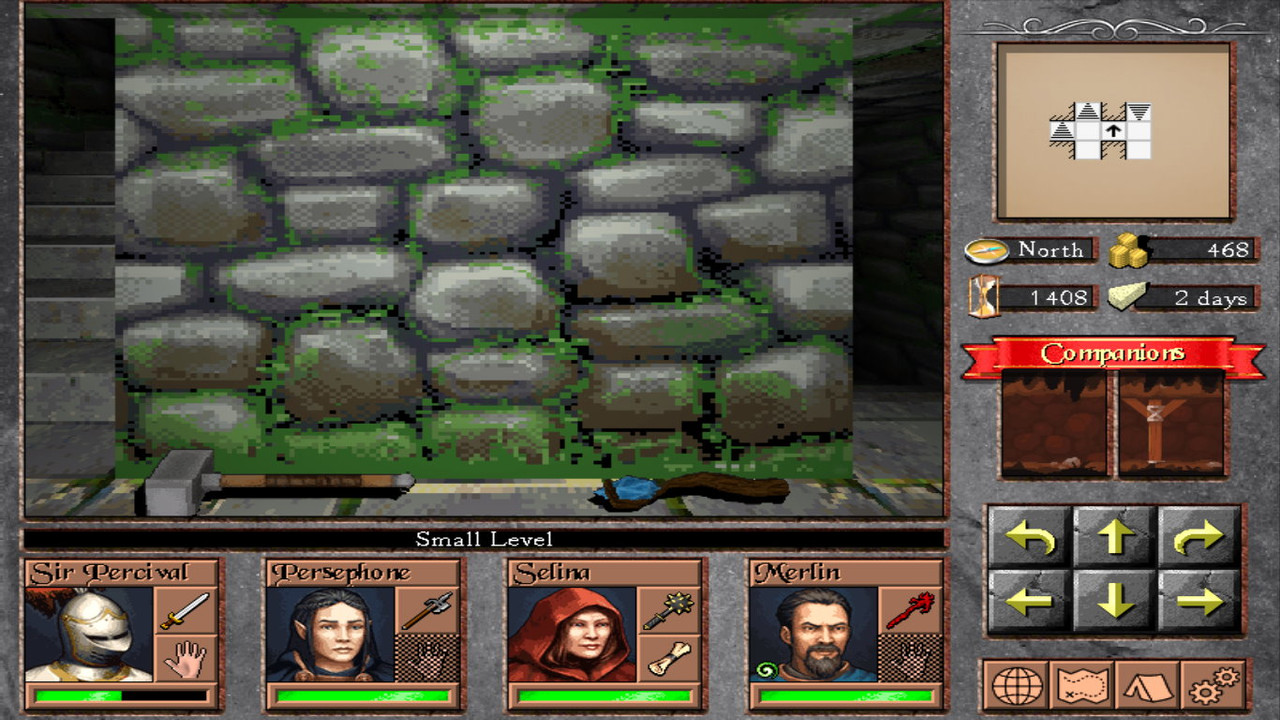 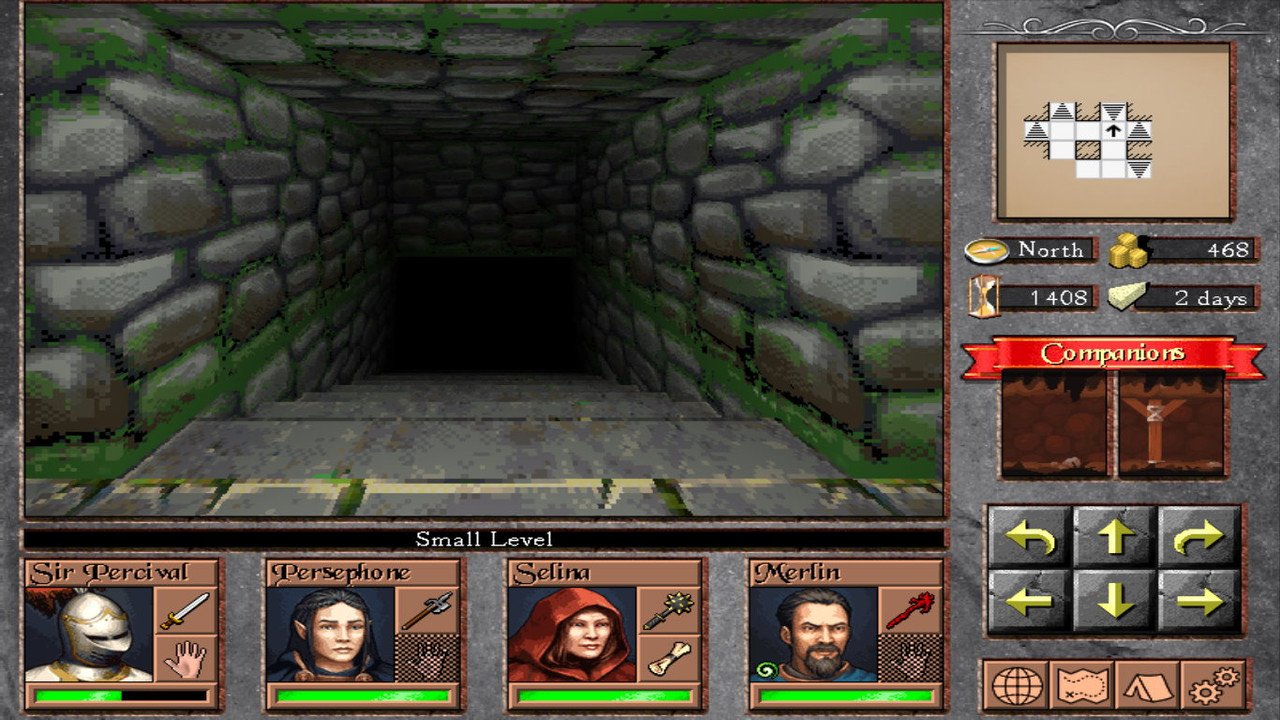 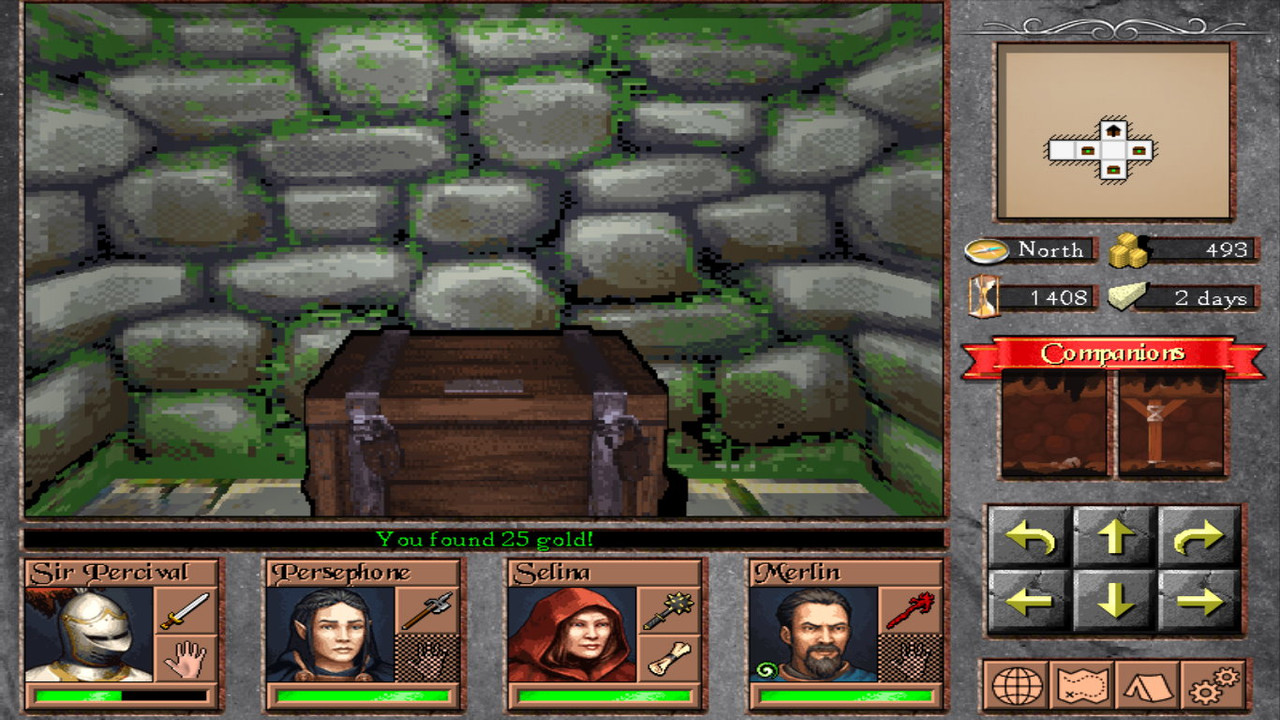 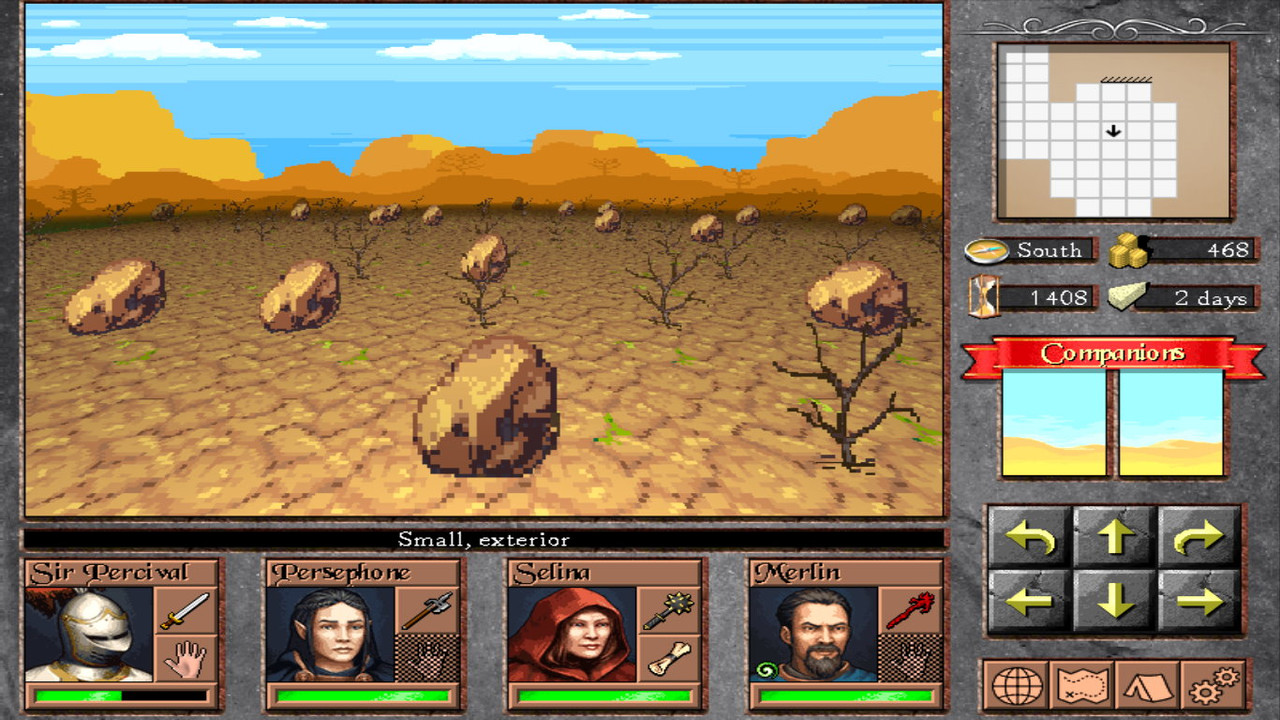 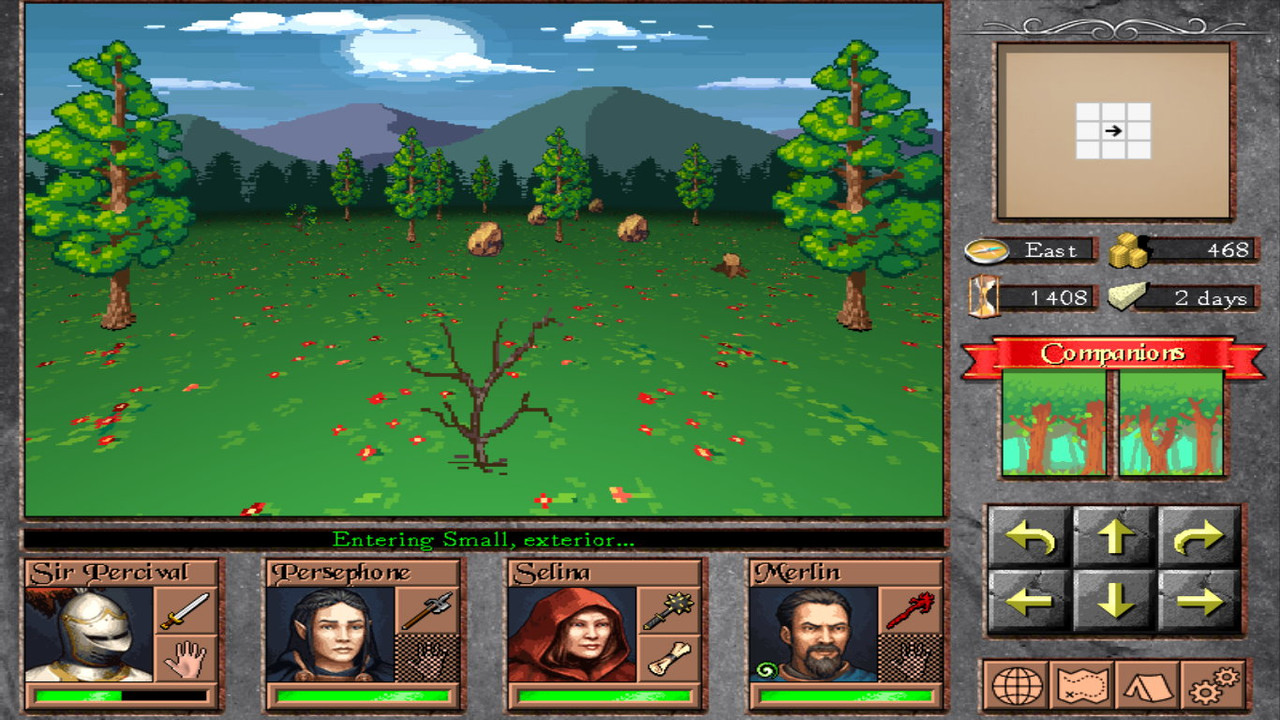 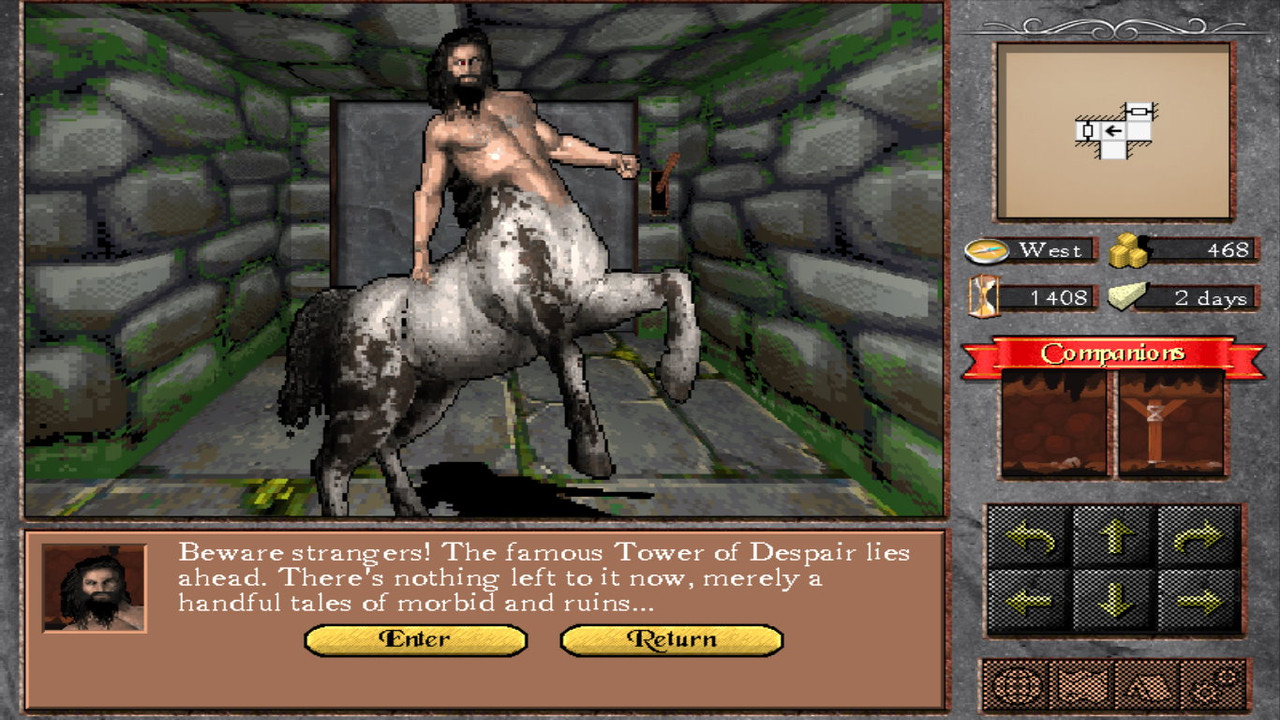 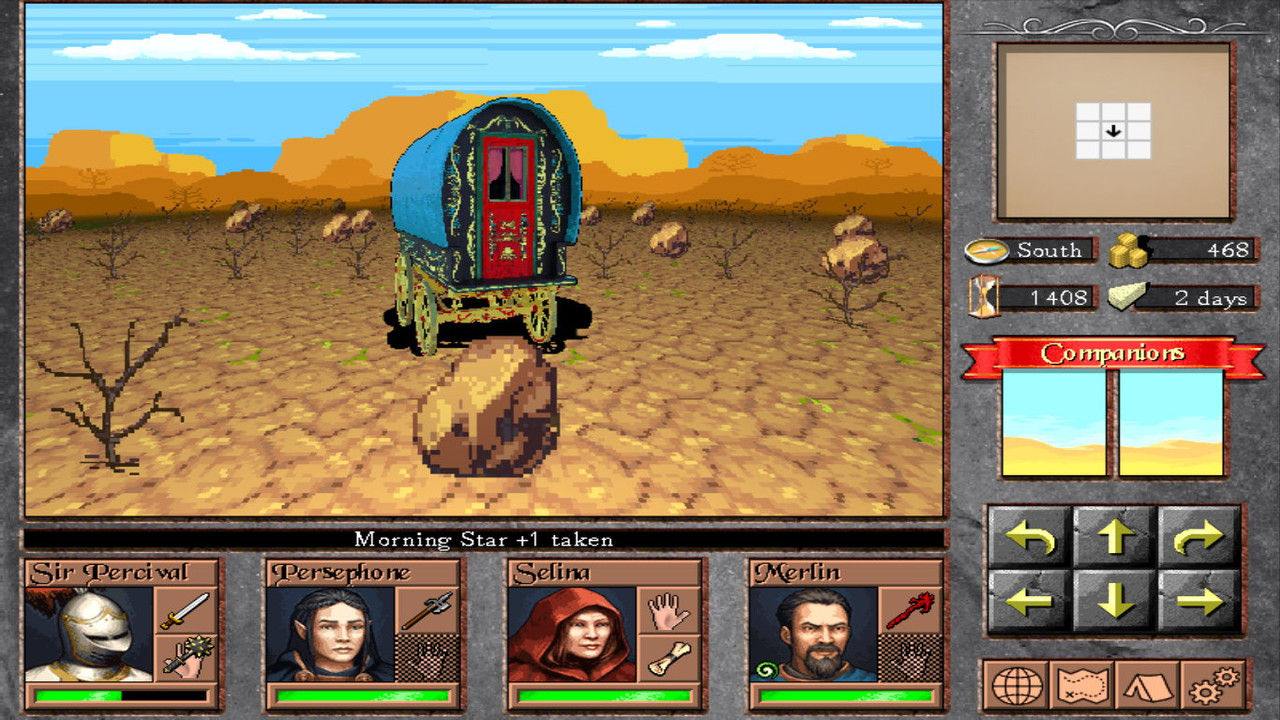 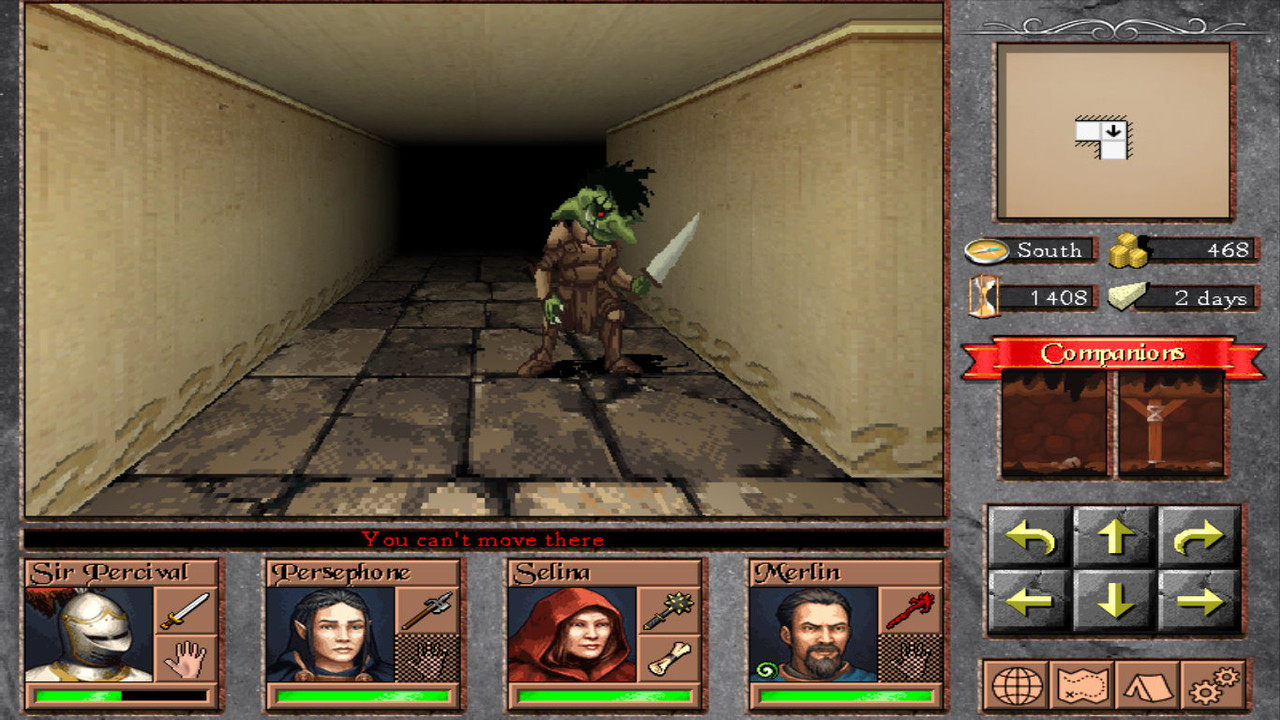 That's all, hope they're making up for the big time gap since last update.
Add some feedback or three, thanx!
--
Check my Patreon
Quote

February 24th, 2021, 17:56
Those screenies and models are looking rather sharp, mate!! I love what I'm seeing, count me in as a future player for sure.

I don't have any criticisms as of yet, I'm drooling too much for that!!
Quote

Those screenies and models are looking rather sharp, mate!! I love what I'm seeing, count me in as a future player for sure.

I don't have any criticisms as of yet, I'm drooling too much for that!!

Thanx for the support, man! I prefer them sharp as well, there's no other way

I'm sorry that I can't provide a demo just yet but the work was just too overwhelming.
--
Check my Patreon
Quote

RPGWatch Forums » Games » Indie RPG » The Darkness Below: a retro CRPG in the making