But I am quite a lone wolf anyways. For me quarantine was pretty chill so far. Haven't left my flat for 3 1/2 weeks now.
But yeah, recording videos or maybe even streaming on twitch might help you.
--
Doing >Let's Plays< and >Reviews< in German. Latest Review: Pathway
Mostly playing Indie titles, including Strategy, Tactics and Roleplaying-Games.
And here is a list of all games I ever played.
Quote

I am a loner and introvert myself so not too much has changed. That being said I would be lost without online friends and contact, not to mention my two dogs. I also still work which also provides contact even if all ZOOM meetings.

Also a growing fan of Discord for chatting, talking, sharing from game play, images, stories, mods, and so on.

If I wasn't working I would finally get some home projects done - painting the condo, redoing the hard wood floors, fixing trim, making the condo spotless. That would eat up a month or two as well as provide exercise. But if anything I am working more now than before this hit.
--
Character is centrality, the impossibility of being displaced or overset. - Ralph Waldo Emerson
Quote

Edit:
Press release of the hospital involved:
https://www.radboudumc.nl/en/nieuws/…-into-covid-19
--
1. It's not what you say - it is the way you say it.
Lovely 2 minute video: 'Change your words, change your world'

April 12th, 2020, 02:13
Latest figures from South Korea regarding fatality. They explain the low fatality rate in part how patients are prioritized, where high risk groups, regardless of symptoms, are prepared for treatment before the symptoms become severe.
Quote

Food start to become a problem. I ate all the good stuff already and have now to eat cheap pâté every day.

Tobacco, wine and weed are scarce too. I sincerely hope those 3 things won't disappear altogether, otherwise France is no more…

I haven't had sex for three weeks.
My heart is sad and my balls are blue.

I also developed a strange addiction for the smell of bactericide gel. That's my life now.

Saw a bee today, all withered but doing its job nonetheless. Maybe this planet will be fine.
Not sure about us.

I'm not becoming mad from isolation. I swear.
--
The delightful and ever novel pleasure of a useless occupation.
Last edited by Winterfart; April 12th, 2020 at 17:23.
Quote


"Mathematics is the simple bit. It’s the stuff we can understand. It’s cats that are complicated."

April 12th, 2020, 20:52
Yes, there's been a constant stream of very old minor celebrities dying in the uk, like 3 or 4 a day. Each time I ponder whether any are worth sharing, but in every case they are so niche that I always consider it unlikely anyone here will have even heard of them.

Today, for example, Tim Brooke Taylor died of the CV, but he was 79 and hadn't done much public work since 2015 other than the odd radio appearance.

His niche was general comedy, usually of the absurdist variety, of a similar age and humour style to the Pythons. Although a household name at one point in the UK, going through his IMDB the most relatable thing he's done for the readers here is that he was one of the writers for the 1960s show The Frost Report, which I believe has international fame? Maybe.

Edit: Here he is doing a live sketch with John Cleese & Graham Chapman [he's the funny one on the right]:

He was also in the original Four Yorkshiremen sketch, which was also pre-Python in origins.
Last edited by lackblogger; April 12th, 2020 at 21:28.
Quote

loading…
--
Doing >Let's Plays< and >Reviews< in German. Latest Review: Pathway
Mostly playing Indie titles, including Strategy, Tactics and Roleplaying-Games.
And here is a list of all games I ever played.
Quote

April 13th, 2020, 08:24
You are probably right about international fame. He was a member of "The Goodies" which ran from 1970 to 1982 - it is stated that this series also had fans in Australia and New Zealand. He also wrote for the show.

The humour was very British and I will miss him.
Quote

a pibbur who refuses to comment on the choie of beer.
--
Over the mountain watching the watcher
Quote

a pibbur who refuses to comment on the choie of beer.

Link doesn't work for me but funny picture

a pibbur who refuses to comment on the choie of beer.

How is American mainstream beer like making love in a canoe? They are both f#@*ing close to water.

And yes, I've had some superb US craft beers and also enjoy Anchor Steam when I can get it.
Quote

April 13th, 2020, 19:38
Switzerland (yesterday) and Germany (today) have met their first (and maybe last) pandemic peak. In a fortnight, they will be able to relaunch their economy on oil prices that have not been that manipulated by the US (it aint globalization when it is Us world order)
--
Backlog:0
Quote 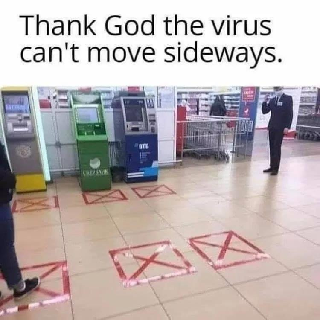 Yeah, my local bank uses large pin boards to separate the spaces between permanently installed ATMs. It looks a bit funny, and it's not perfect. But it's better than in that picture.
Quote

April 15th, 2020, 21:34
Grocery Workers Say Inconsiderate Shoppers Are Endangering Them In The Pandemic This article contains some great grocery shopping tips. One might assume these would be common sense at this point but as one of these workers I can tell you there are still lot of shoppers who need to read this.
Quote

All of that should be common sense.
--
Character is centrality, the impossibility of being displaced or overset. - Ralph Waldo Emerson
Quote