Prometheus Wept: The new turn based RPG from the developer of Vigilantes

August 10th, 2020, 19:39
Hey all. Will use this thread to make some smaller updates between the bigger ones. Comments, questions and suggestions welcome!

This is an early look at the character selection screen, which allows you to name your character, select a model and hopefully, in the future, select skin tone. 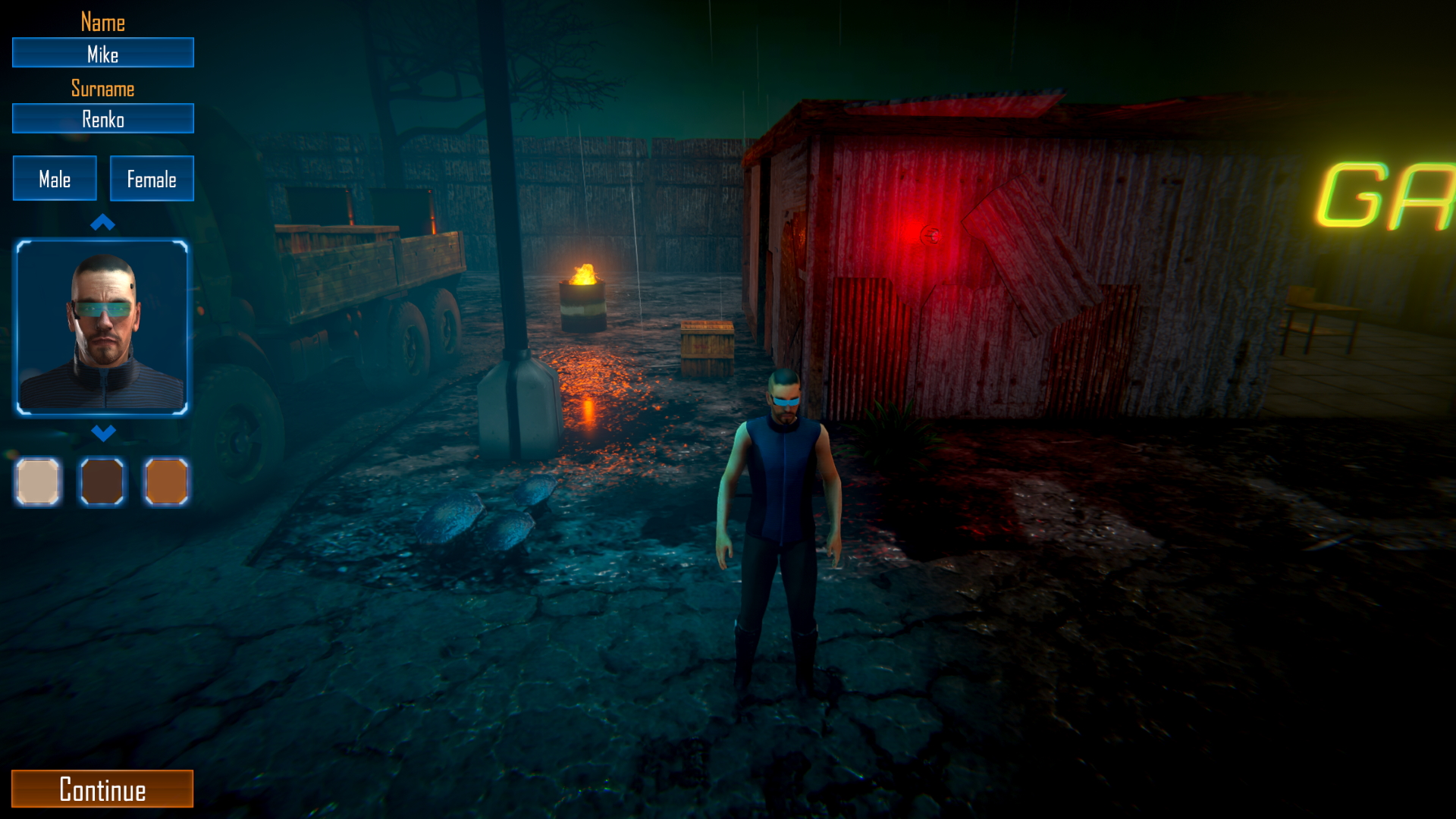 The current aim is to get from the splash screen to the point of starting the game, which includes character creation, both visual and in terms of stats/skill points.
--
Developer of Prometheus Wept, Vigilantes and Deadstone
Quote 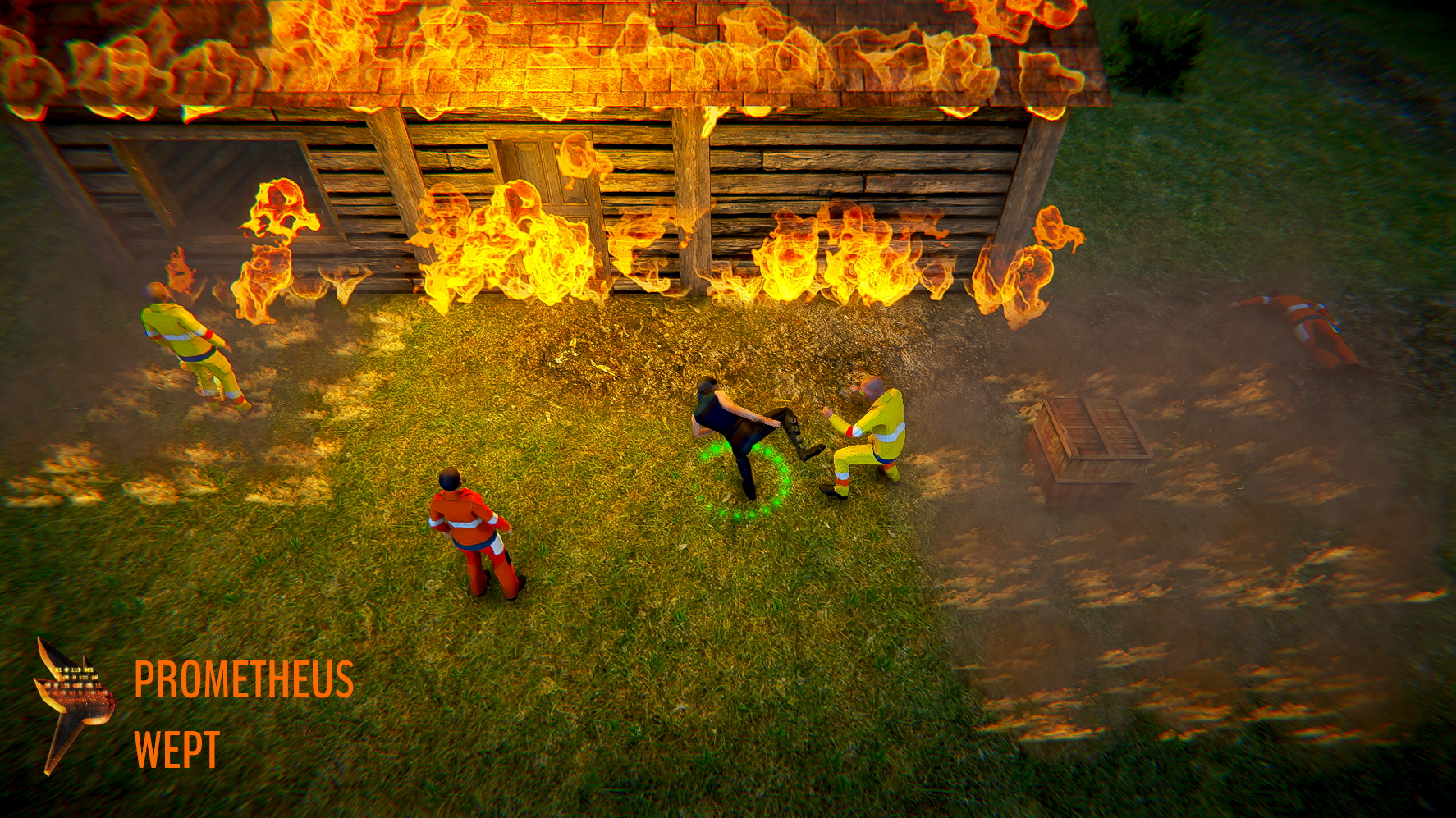 A first look at a new combat mechanic: the push attack. Here you can see an enemy being pushed into fire. Push attacks will also be useful for dislodging enemies from cover, clustering enemies for explosive attacks, and moving enemies so the environment can be used against them. It currently does half damage and the chance of success is based on the attacker's versus the target's prowess.
--
Developer of Prometheus Wept, Vigilantes and Deadstone
Quote

August 26th, 2020, 10:19
Hi again! Visually, the two aspects I'm trying to improve on most from Vigilantes are the environment and UI. Here is the result of some experimentation with lighting, terrain painting and vegetation. 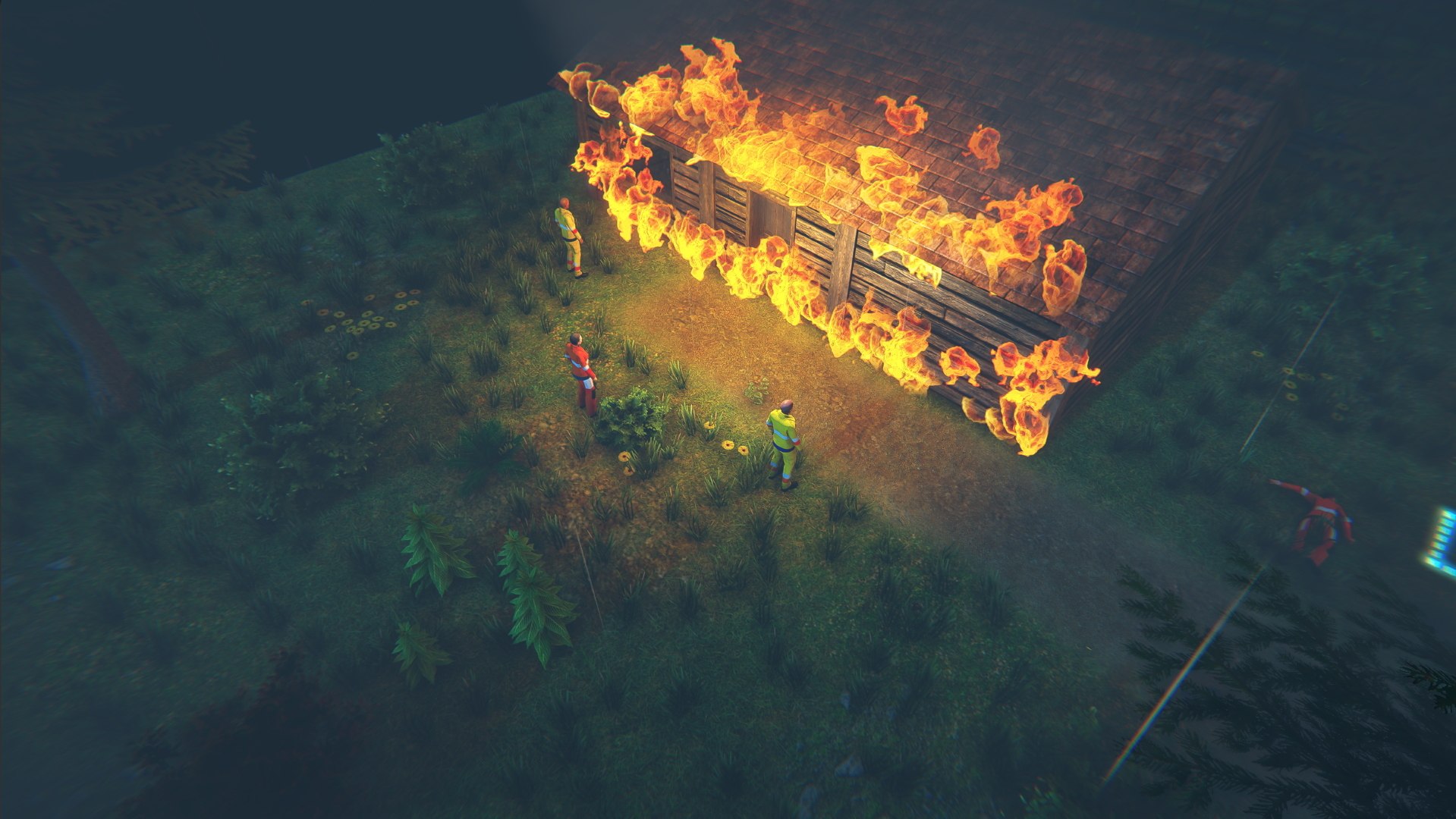 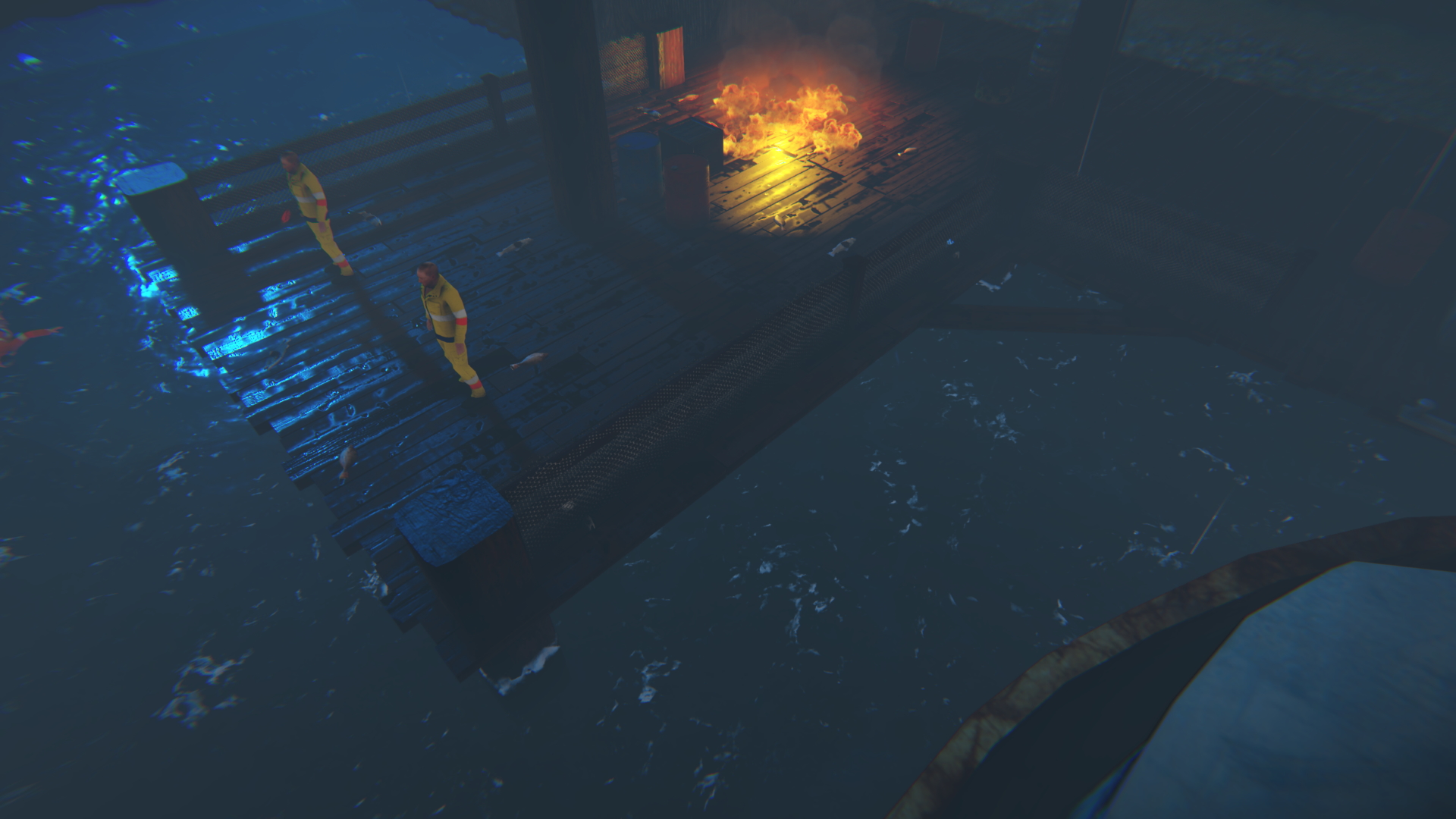 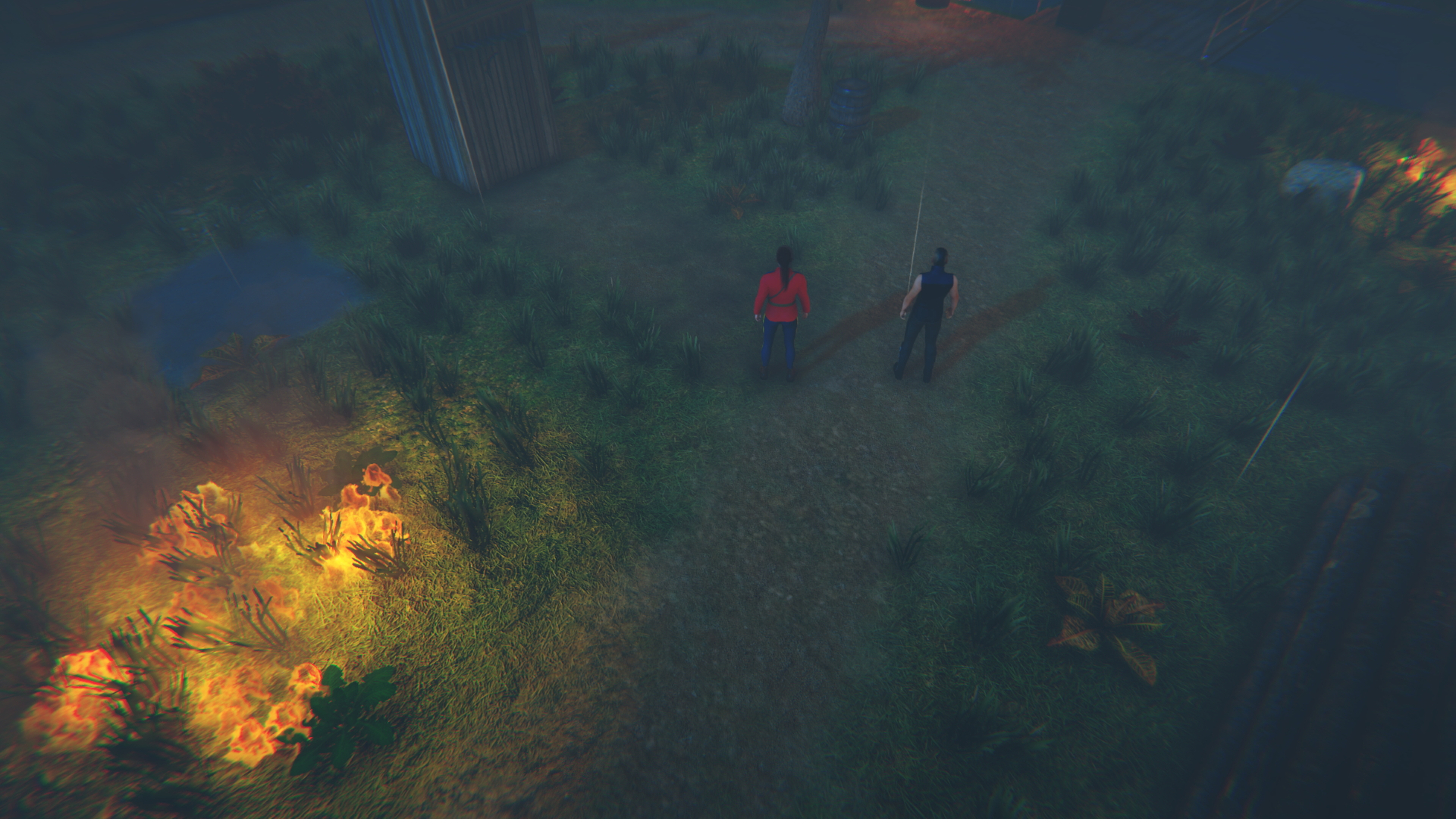 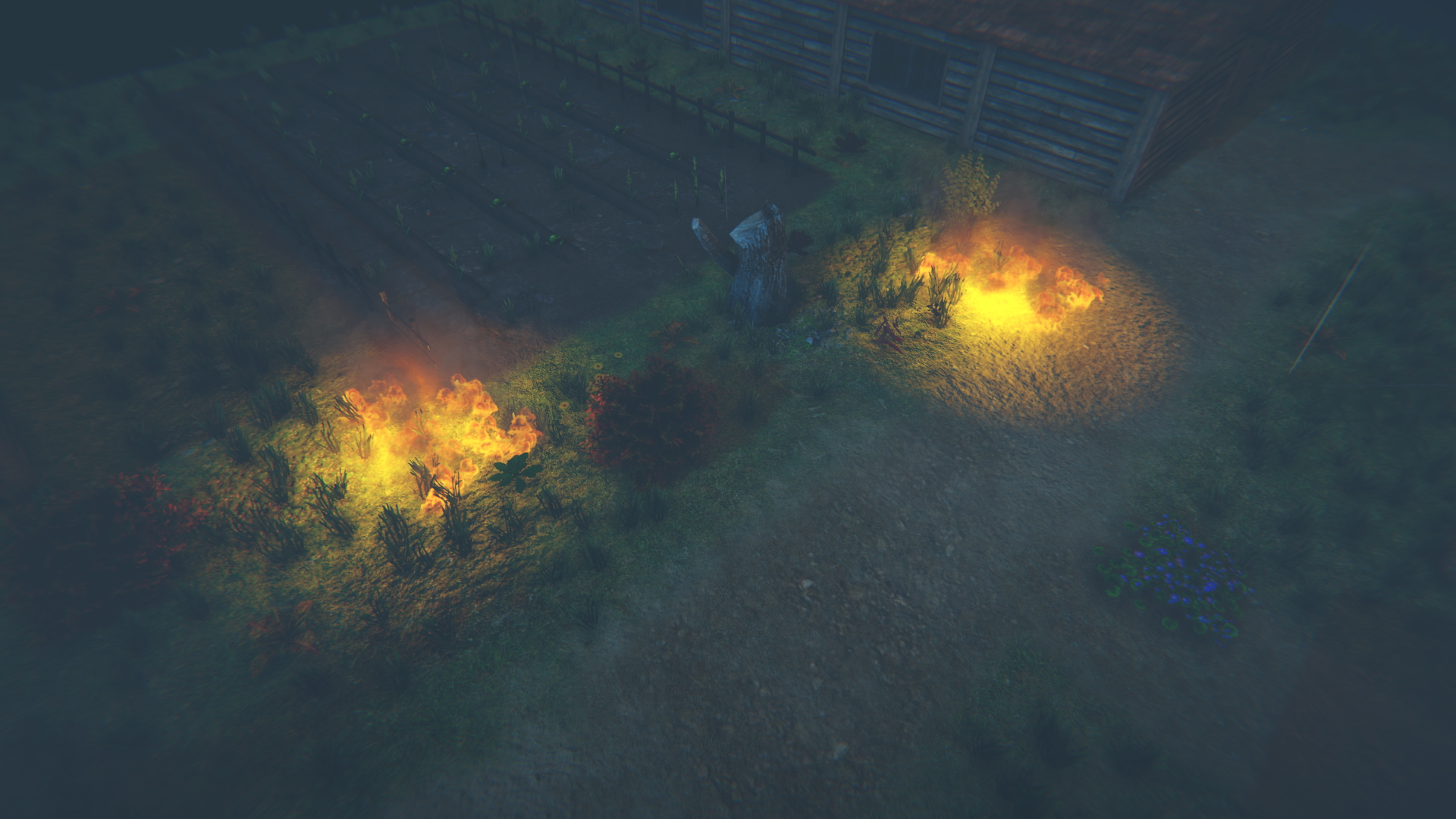 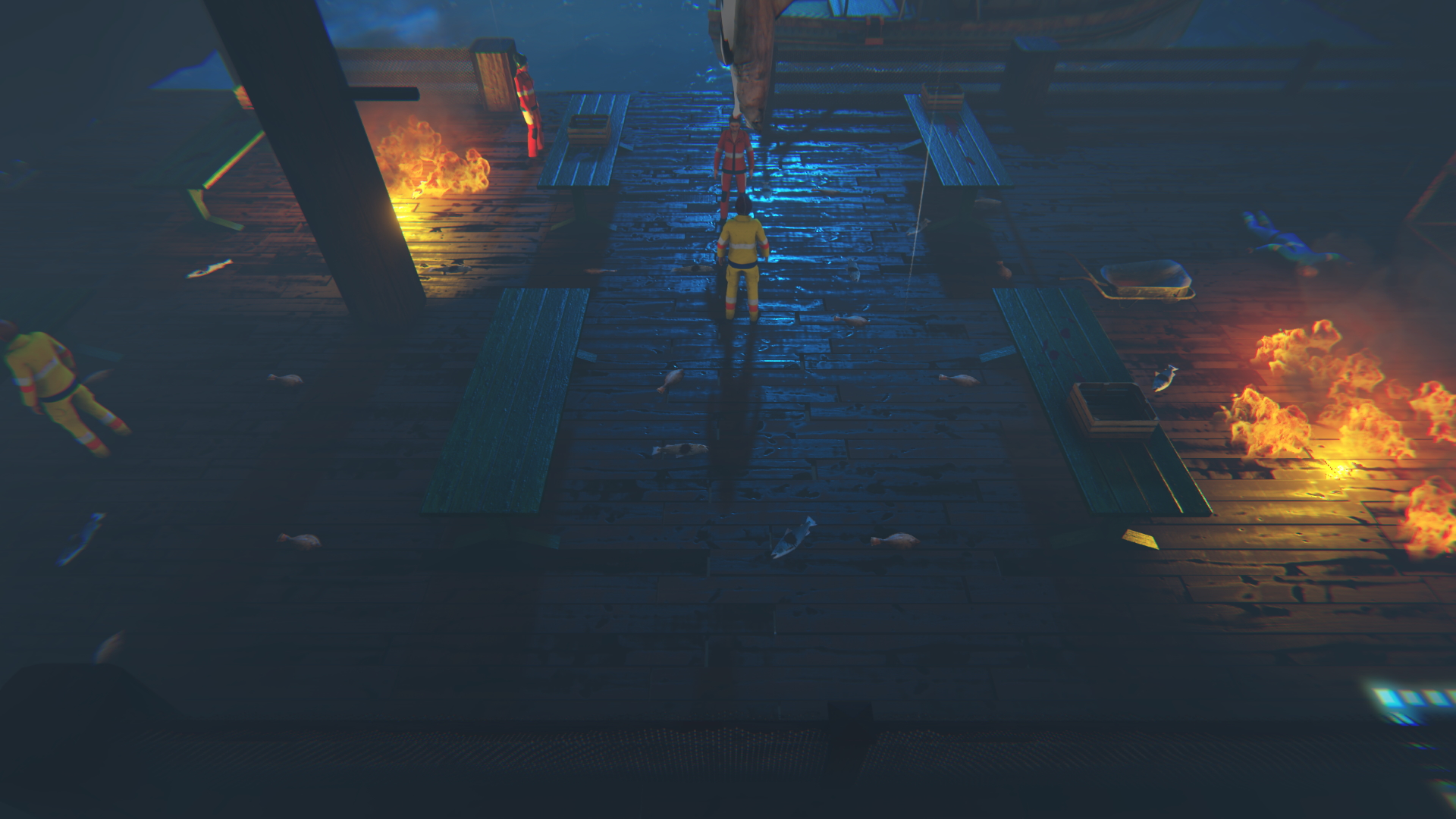 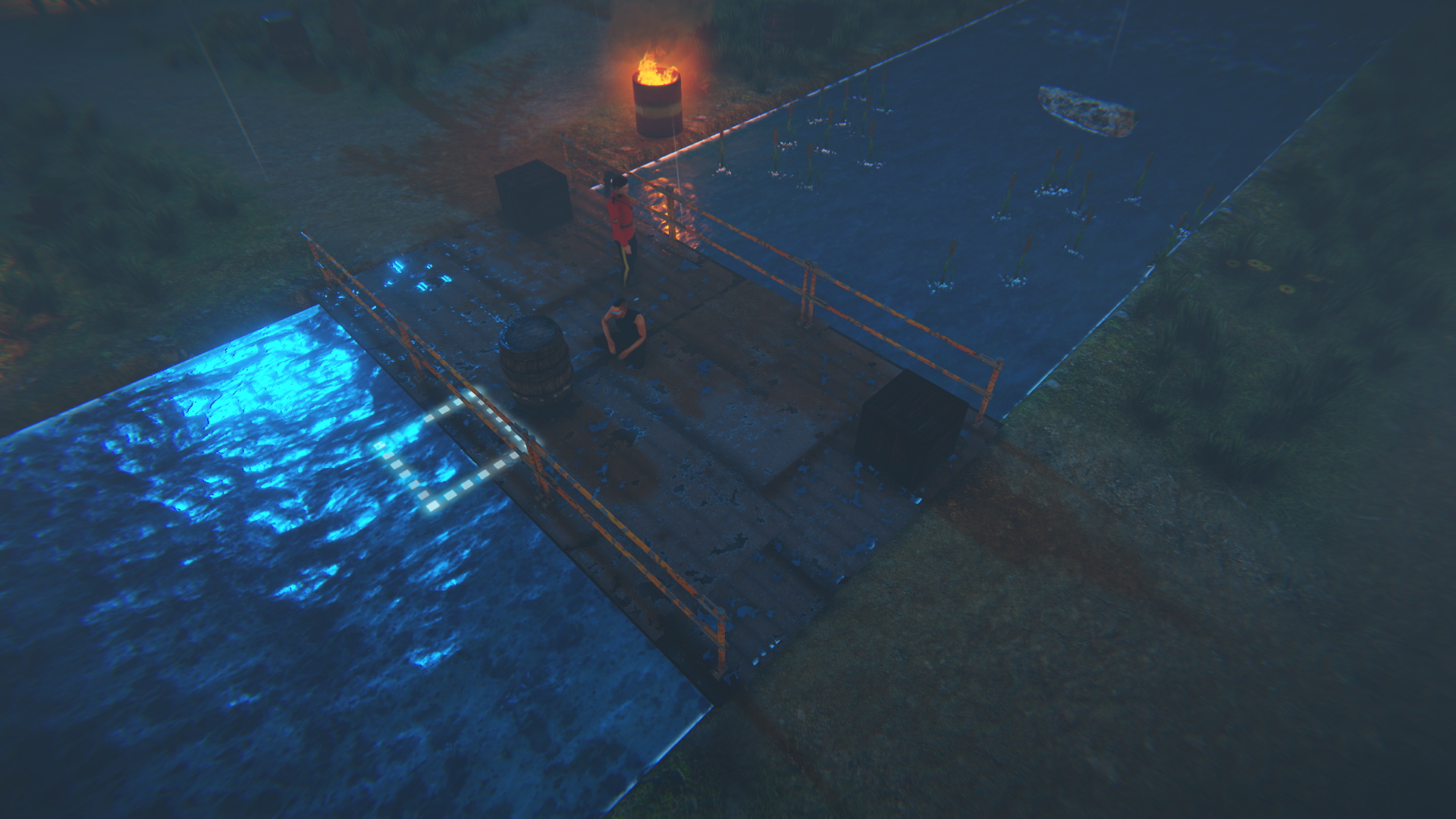 At this stage, most of the writing and scripting is complete for the first play area, though the focus hasn't entirely been on these activities. Handling all the events which can happen in-game requires a lot of work on the dialogue system, and in the interest of gameplay variety I've been talking about, a special set of rules has been coded for the finale of this area. The demo will likely comprise this area and one more, but there's still a lot of work to do in terms of balancing, polish and building the infrastructure on which the game will run.

This is all a bit vague, so if you're okay with spoilers, here's some more concrete info on what's happening in the initial play area:

Spoiler
The first play area is called The Drag. It's a small village which focuses on fishing/transit and is under the protection of the primary location in act 1, Sunny Pines. Soon after entering Sunny Pines, you will be recruited by the mayor to deal with an emerging situation: an outbreak of mass hysteria in The Drag, characterised by violence and madness. You travel there at night, with the fishing boat captain who raised the alarm, with the goal of scouting the area in advance of the arrival of Sunny Pine's militia, and doing what you can to protect the citizens and fishing fleet.

So, Atlas shrugged and Prometheus wept, what did the other ones do?

Well, Onan masturbated and Heisenberg was completely uncertain what to do.
--
Proud leader of the Shit Games Liberation Front
All your shit games are belong to us

November 25th, 2020, 23:47
Hey all. Apologies for slow response - I'm not getting emails to notify me of responses.
@porcozaur - I had a look at geforce now, and based on what I'm reading, it seems like I would need to integrate and configure third party plugins to the game to add it. It doesn't looks like it's just a matter of opting in to the program.
--
Developer of Prometheus Wept, Vigilantes and Deadstone
Last edited by Timeslip; November 27th, 2020 at 12:47.
Quote

November 25th, 2020, 23:48
A quick update: The last few weeks I've mainly been building infrastructure to handle changes to the game world, stuff like moving NPCs between locations, configuring and saving them. Trickier than expected, mainly due to the large number of different cases which need to be handled. Today, I starting improving one of the maps for the demo. Nice to get away from coding after a couple of weeks of it. Here's a screenshot. 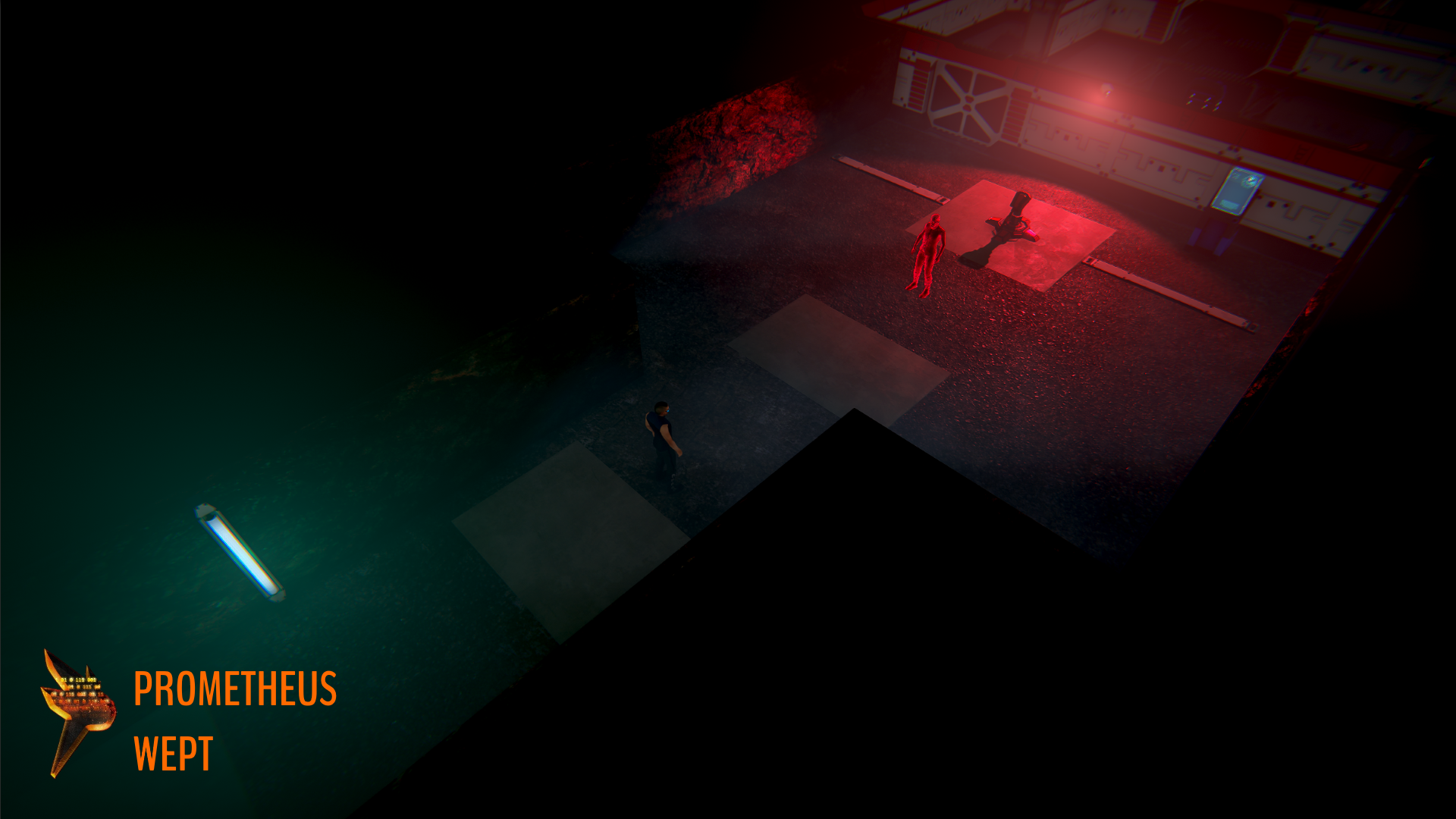 November 27th, 2020, 17:10
A screenshot of the resources which can be harvested in Prometheus Wept. The metals are used in armour, weapon and weapon component crafting, while the plants can be used to create combat stimulants. 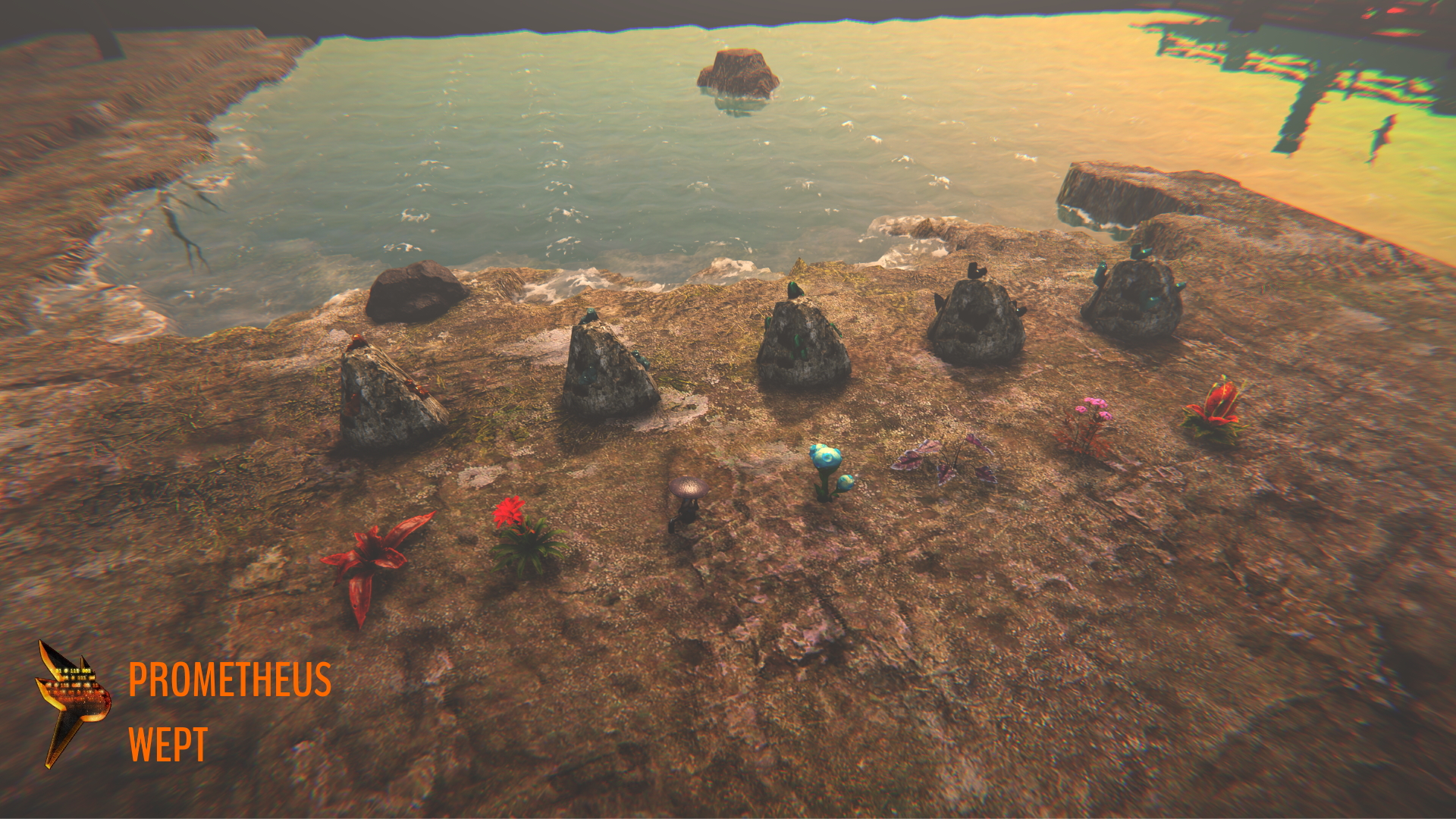 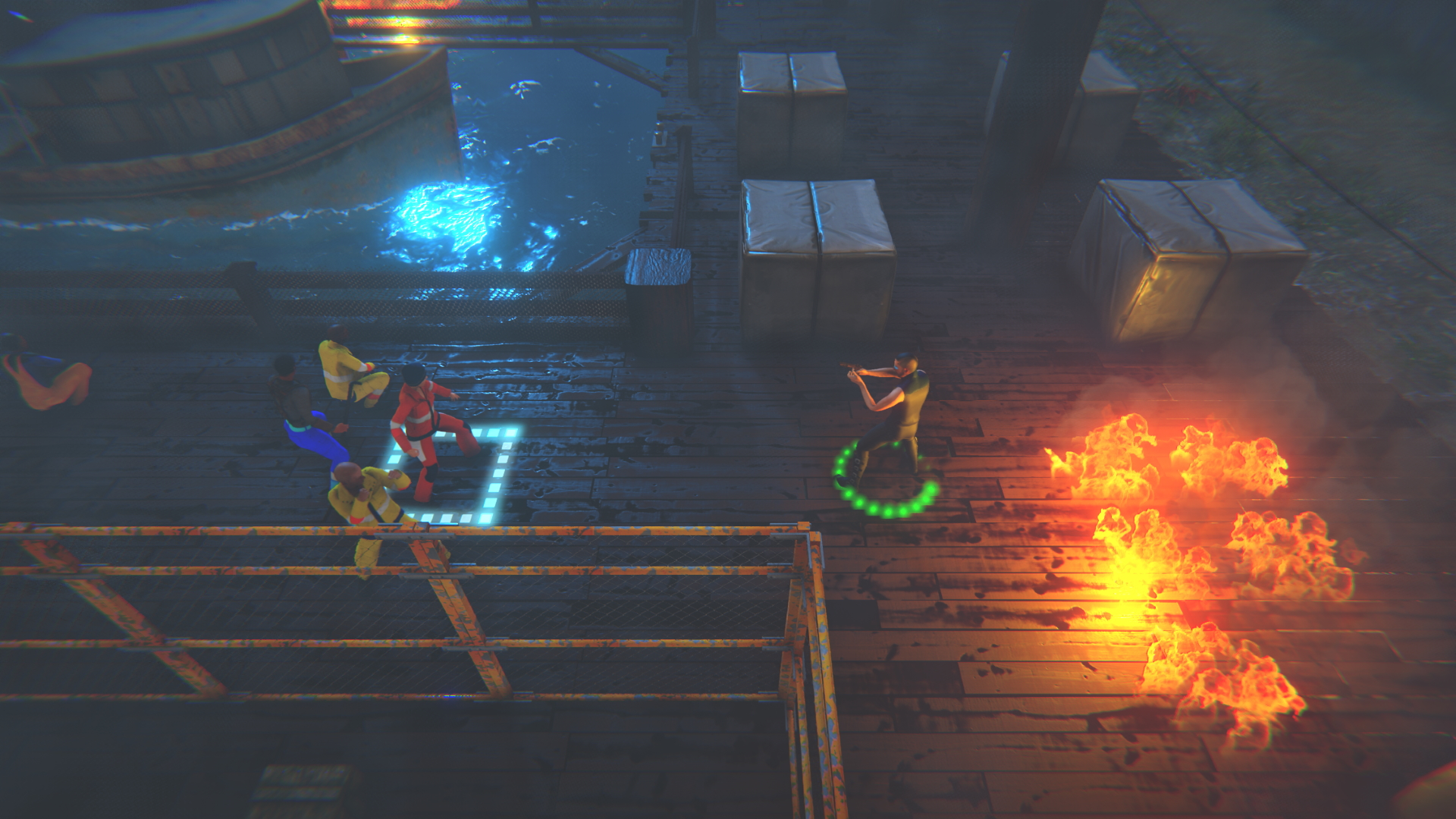 February 9th, 2021, 19:29
Hi all. Since the last post, I've worked on improving the appearance of the UI, taught computer controlled characters how to open doors (and not throw a load of errors), and am currently working on the second of two play areas for the demo. You might be able to guess from the updated image below, that this isn't going to be a typical post-apocalyptic RPG which focuses on fighting dirty bandits in a burned out wasteland. 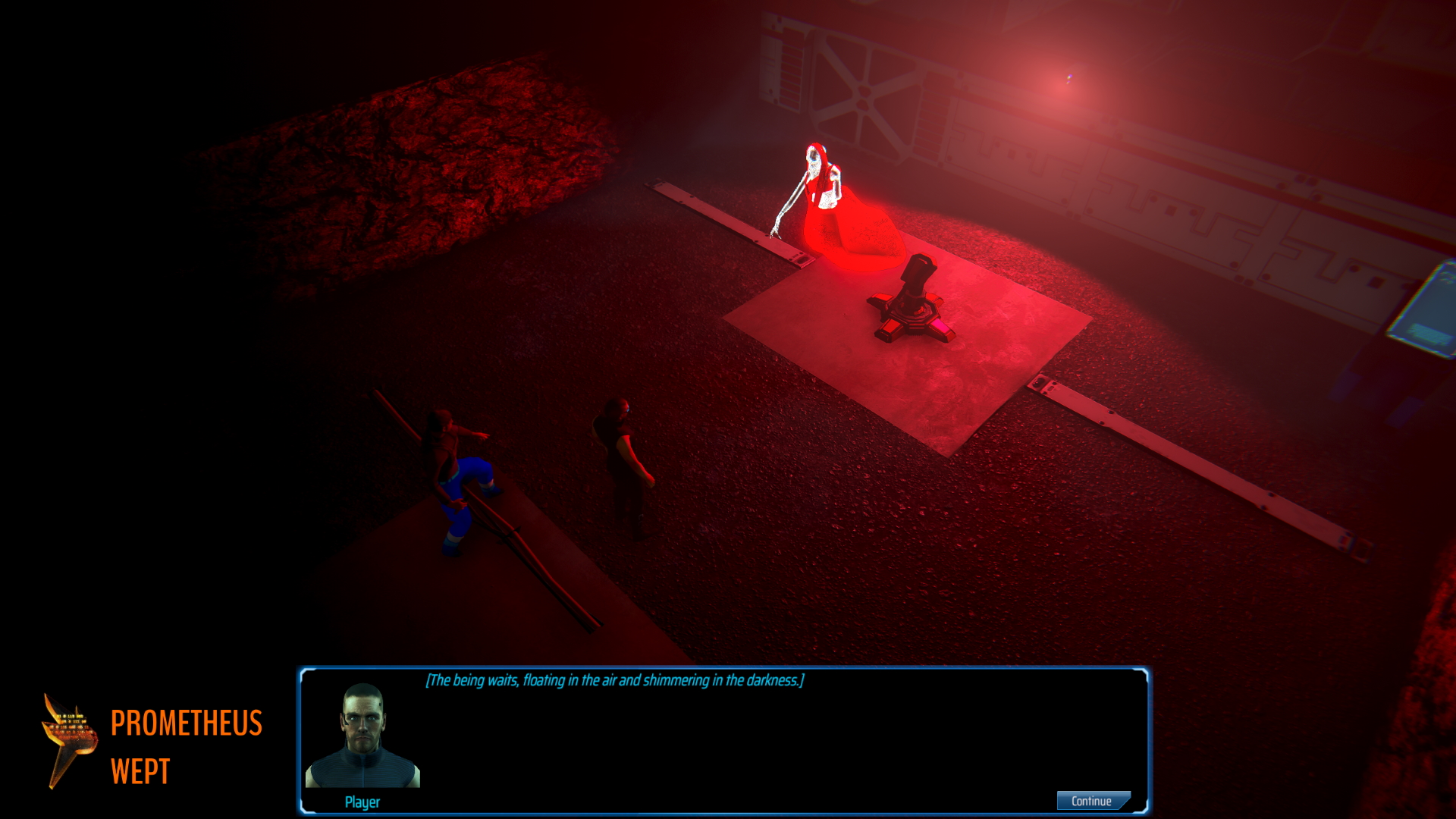 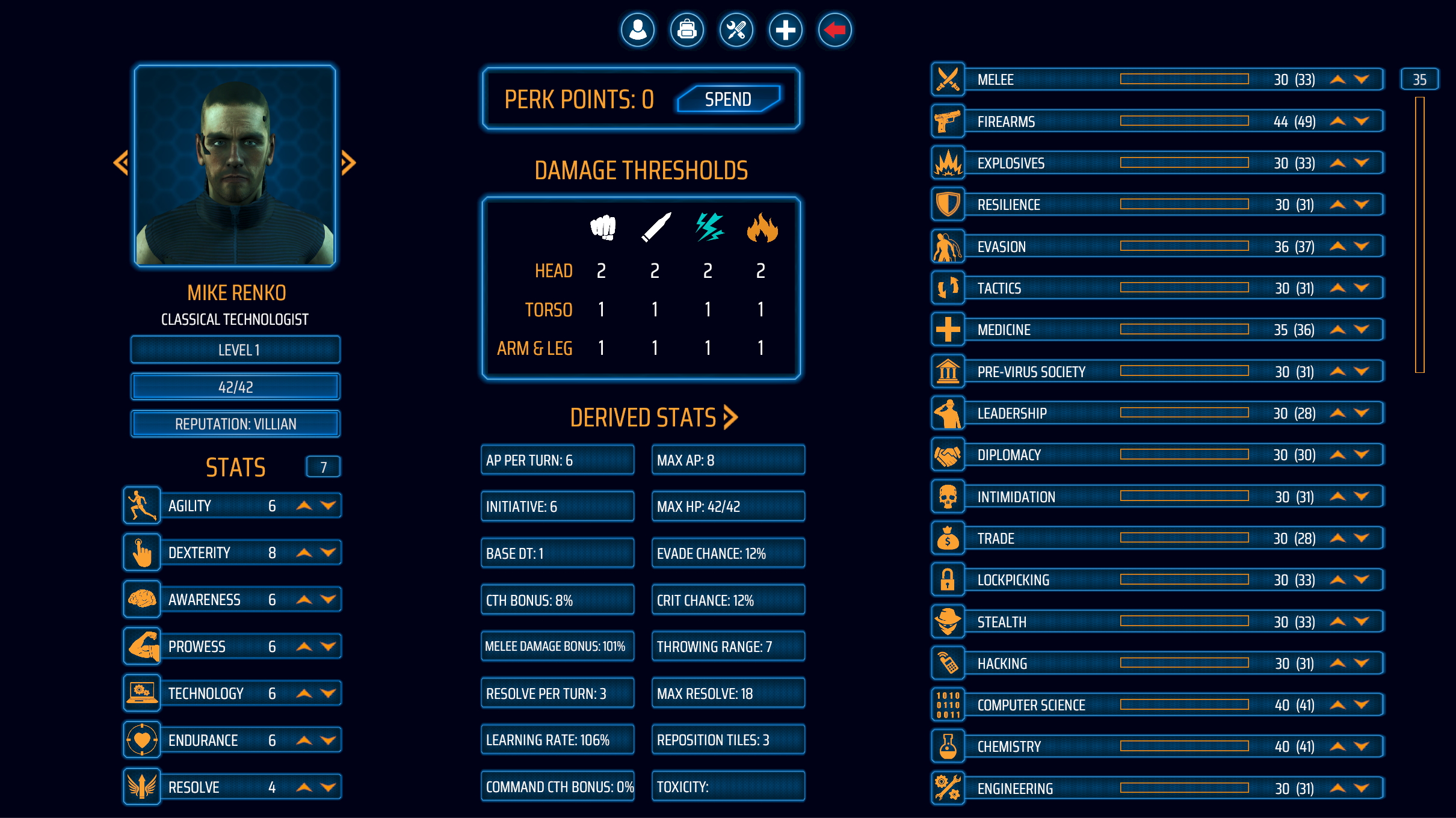 A refresh of the character screen. Most of the UI screens which will appear in the demo are nearly there.
--
Developer of Prometheus Wept, Vigilantes and Deadstone
Quote

February 24th, 2021, 12:54
Hey Carnifex! Cheers - yeah, it seems cleaner to me than the UI in Vigilantes.
--
Developer of Prometheus Wept, Vigilantes and Deadstone
Quote

February 24th, 2021, 17:57
Much cleaner, aye. That's a good game though, I enjoyed my first jaunt through Vigilantes and I know I'll be doing a replay at some point.
Quote

Previously, I've hinted at a big, unannounced feature of Prometheus Wept. Finally, enough progress has been made to talk about it. To begin, you may be aware that Prometheus Wept takes place in the aftermath of a cyber attack which corrupted most of our digital technology.

The new feature allows the protagonist to digitise their consciousness and enter corrupted computer networks as an avatar. This means that two turn-based battles can occur simultaneously and the actions taken in one battle can affect the other. Typically, this will involve your allies protecting the player character from physical enemies, while your avatar battles the network's security protocols.

Each network is comprised of a number of nodes. Each node controls a system in the physical world, for example a door or defences. When an avatar defeats and captures a node, the player gains control of that system. To make more sense of this, here's a concrete example which will be available in the upcoming demo.

You can find more info and add Prometheus Wept to your wishlist on Steam! 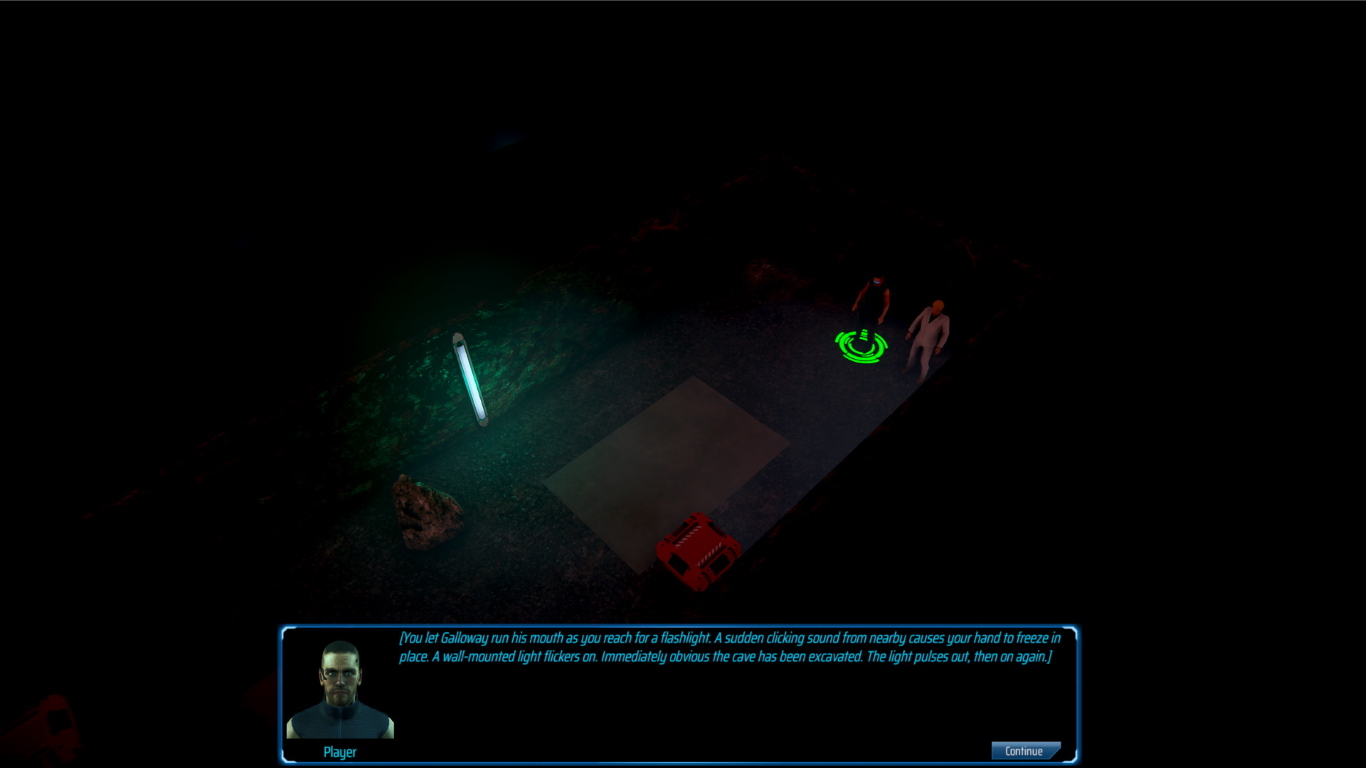 In the company of your first companion, Ferdia Galloway, you discover an underground complex. 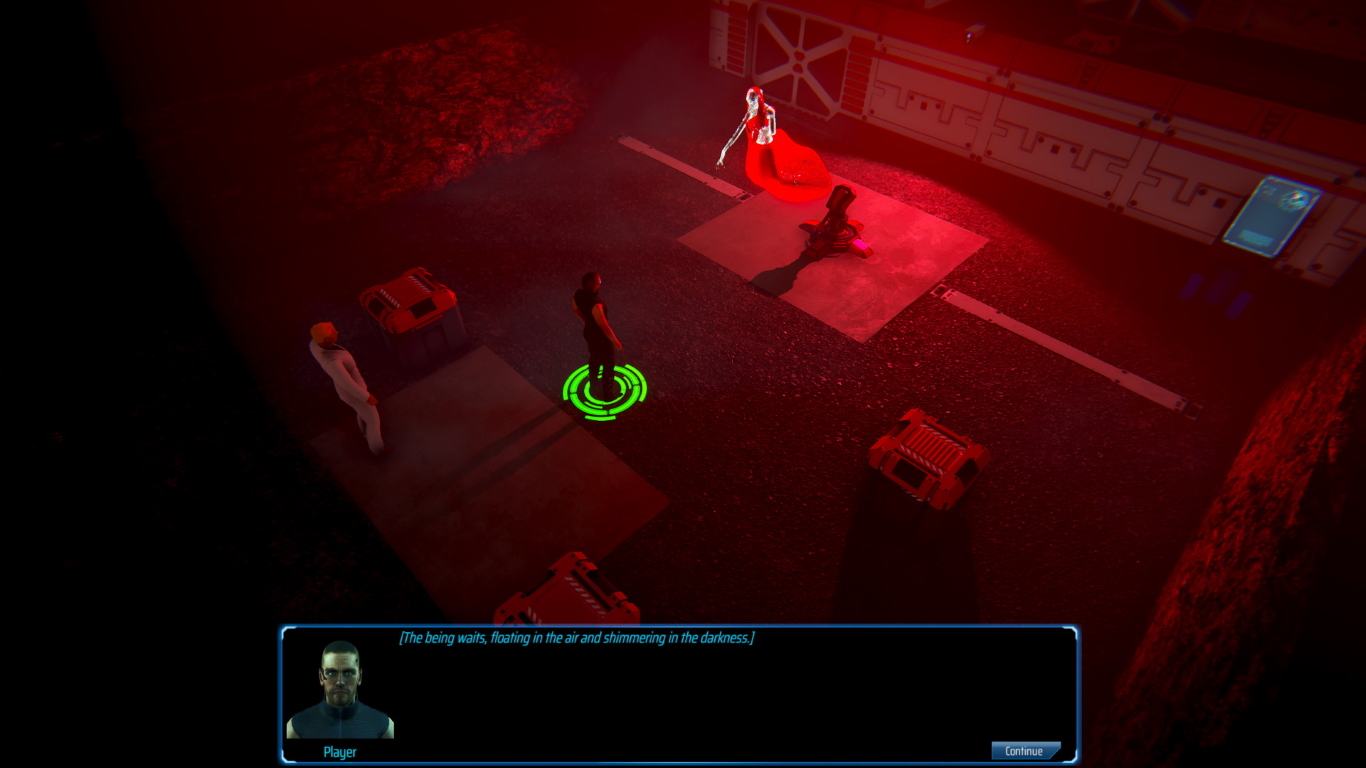 You continue along the tunnel until you are accosted by the complex's mysterious guardian. 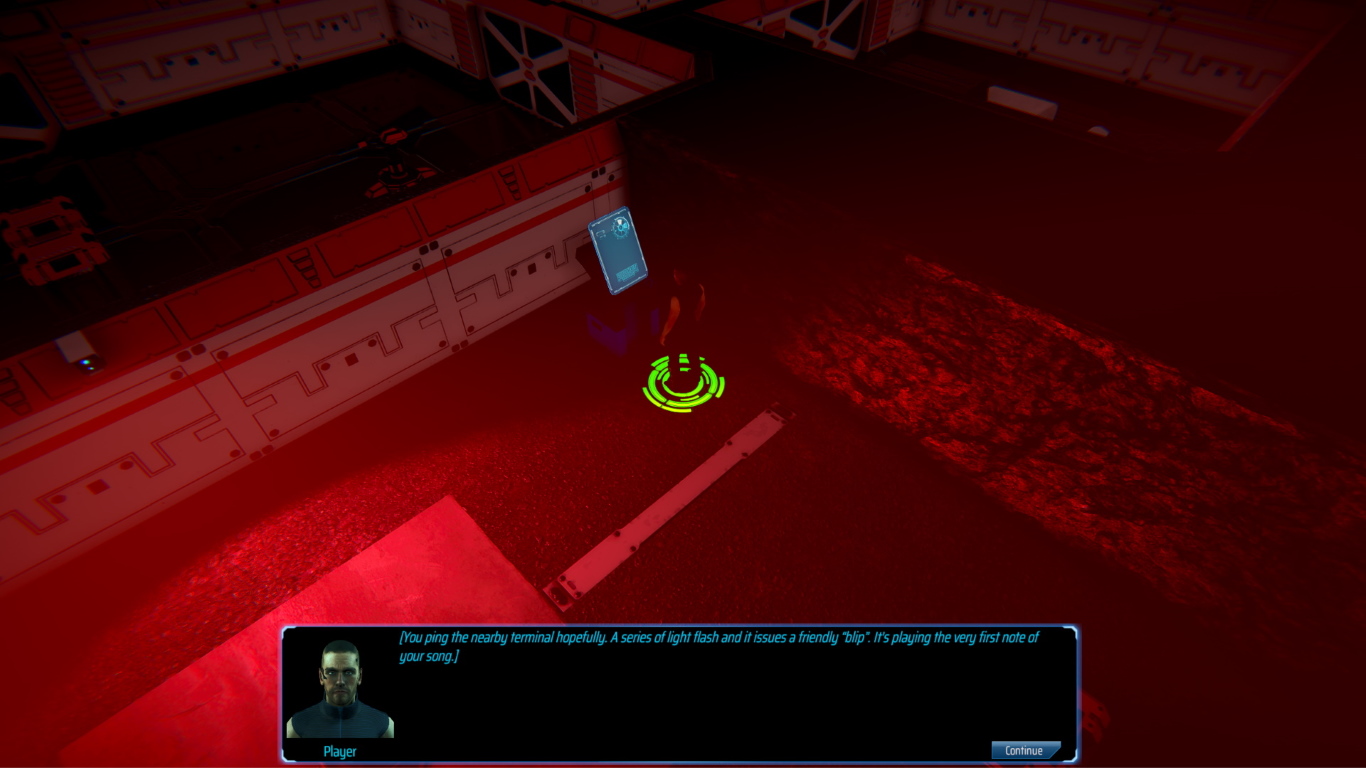 There's no way you're getting through the door, but there is a terminal nearby. You might be able infiltrate the network and get control of the door that way, however, when in cyberspace, you can't act in the physical world. 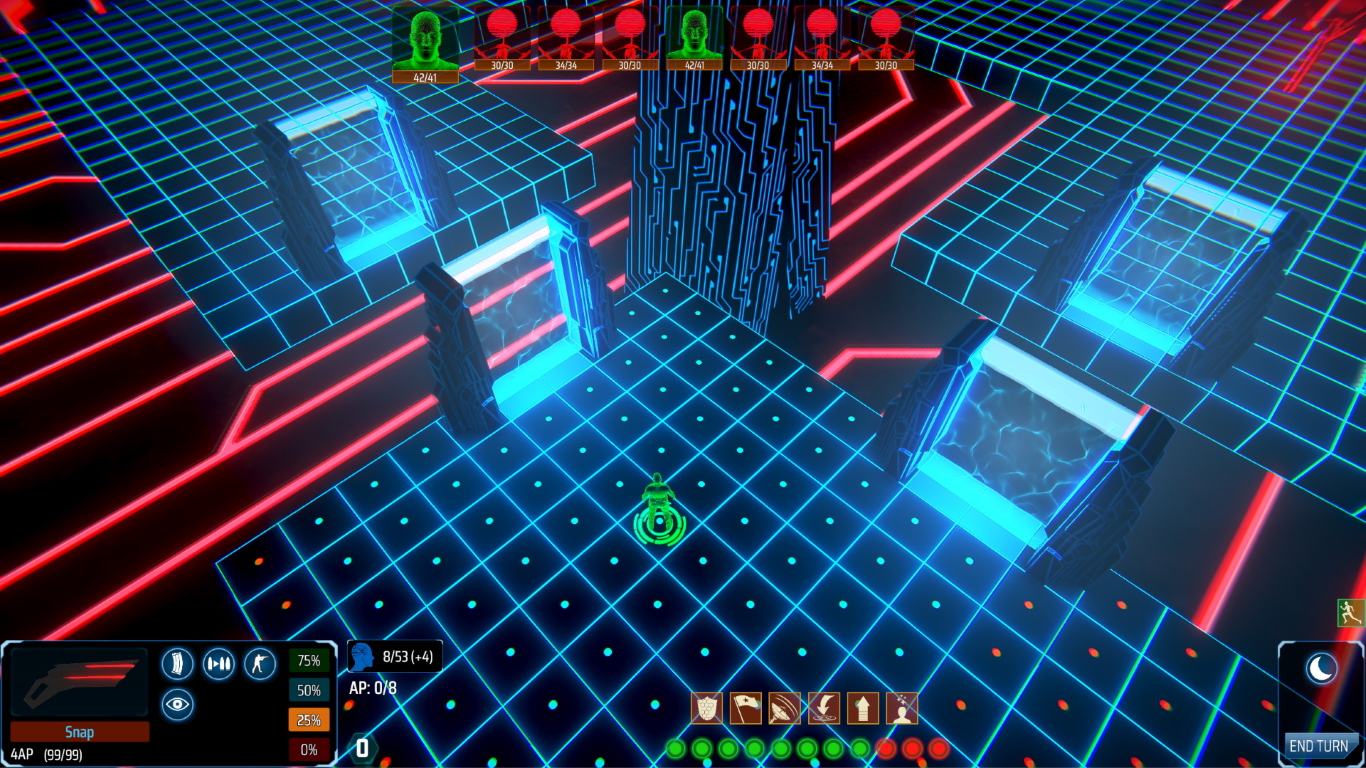 Here we are. Cyberspace. The terrain is fragmented, but you can use the portals to island hop. You can use viral projection, a ranged attack, on any hostiles. At the bottom centre of the screen there are six buttons, which correspond to abilities called scripts. Scripts cost power to run and you generate power each turn in cyberspace based on your tech stat.

Continued in next post:
--
Developer of Prometheus Wept, Vigilantes and Deadstone
Quote 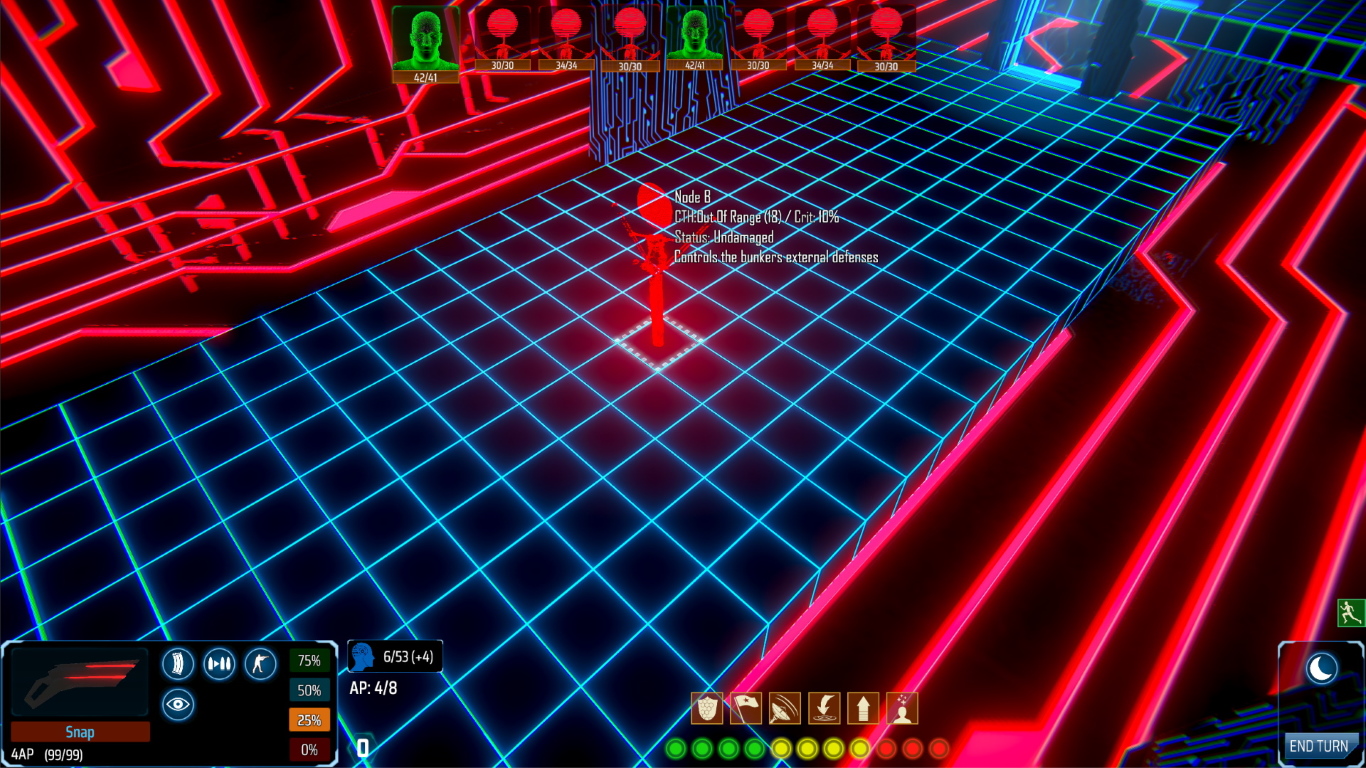 Using the ScanNode() script, you discover that Node B is responsible for external defences. The other two nodes control the main door and interior defences. Node B is a good place to start, in case you are attacked in the physical world. Spoiler: you will be. 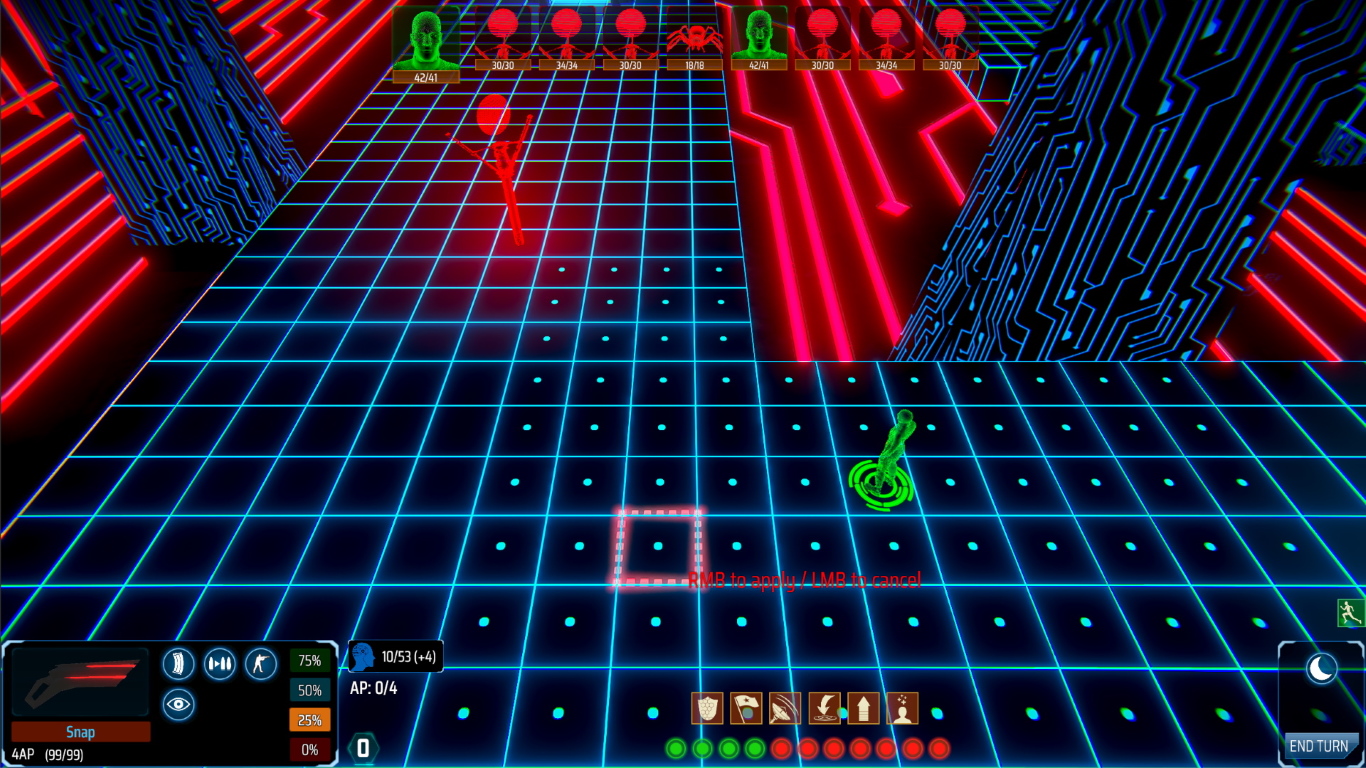 The node's attack range is greater than yours, but you manage to avoid its attacks. You don't have enough AP to close in and make an attack this turn, so you call the SetMemoryLocation() script, which allows you to relocate to a position up to five tiles away. 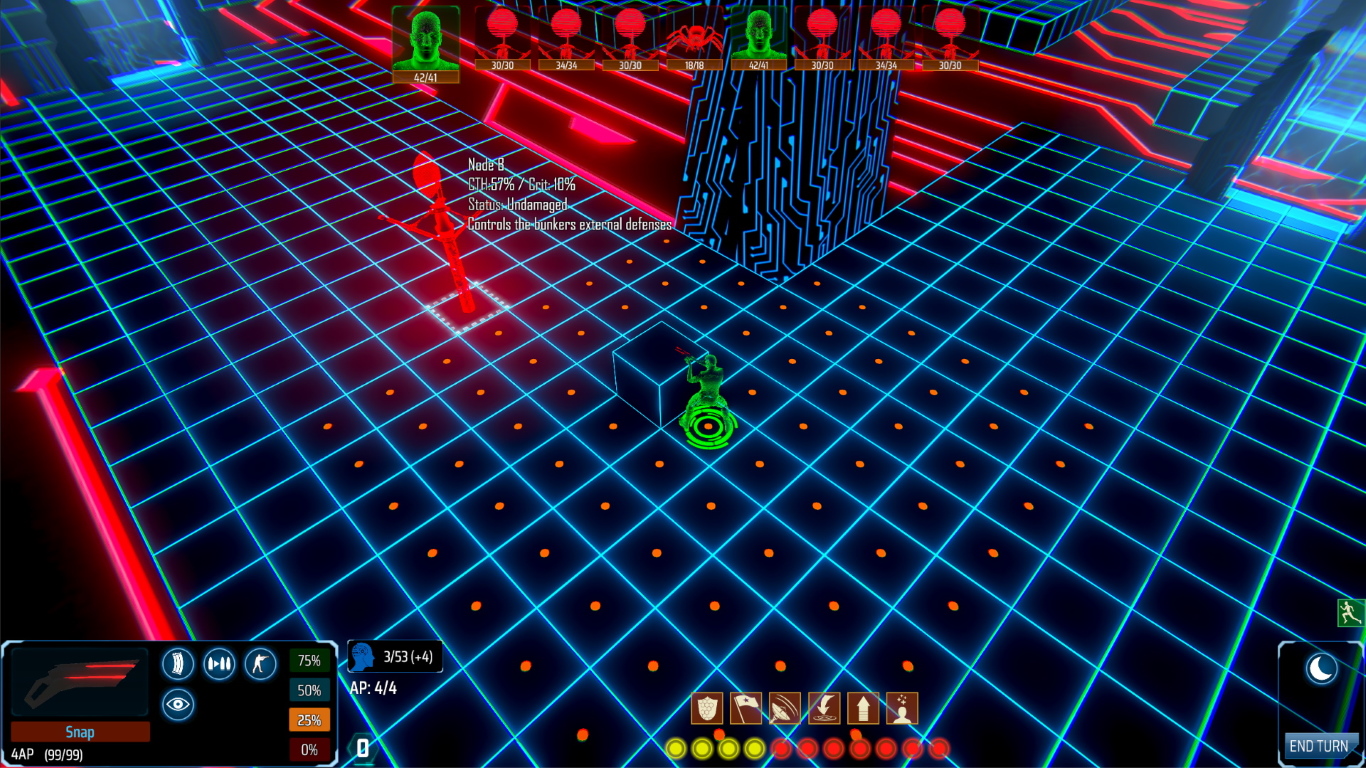 You've got one last trick up your sleeve. You call the InstantiateCover() script to create cover to help protect from the nodes attacks. 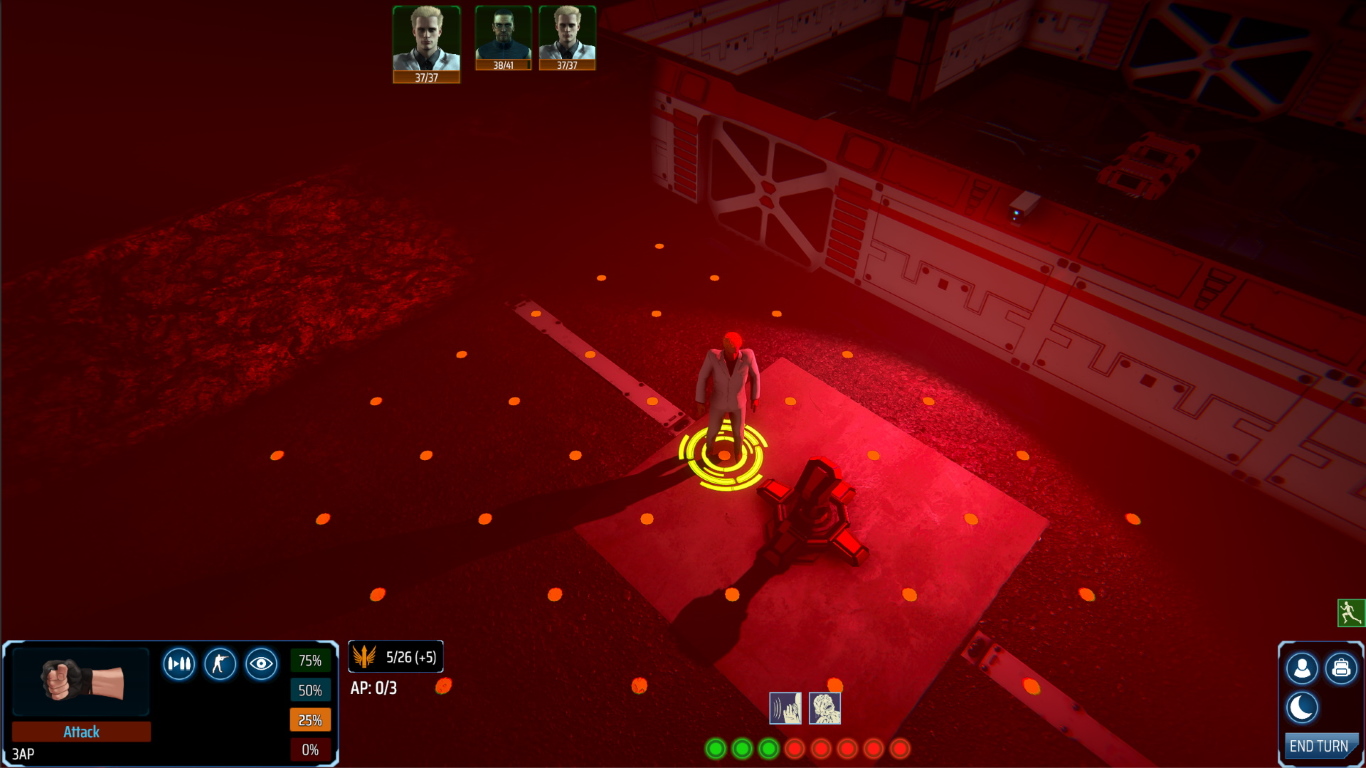 Control returns to the physical world. All quiet… so far.
--
Developer of Prometheus Wept, Vigilantes and Deadstone
Quote