KotOR Remake - In Development Outside of EA?

January 25th, 2021, 01:43
Wccftech share a rumour about a possible remake/reimagining for Star Wars: Knights of the Old Republic. The source revealed that development is being done outside of any EA studio.

"Amongst my digging, I heard there is a Knights of the Old Republic project in development somewhere. I talked to a couple of people, and I also found out that Jason Schreier said that it's not with EA, and we'll 'never guess' who the studio is that's making this game."

Well-known insider shinobi602 confirmed that a new Stars Wars: Knights of the Old Republic is in the works, adding that the studio working on the game is not a household name.

January 25th, 2021, 02:07
I'm sure a lot of people will rejoice about this, but I'd much rather have a new RPG in that setting as opposed to a remake of KotOR.
Quote

January 25th, 2021, 03:29
These rumors pop up every year only to be proven wrong so we'll see. Though from the info given it will be a possible unknown developer, and probably might not be an RPG.

Also the leaks say a new game/entry not a remake of KotOR.

One of the comments they mention Archetype Entertainment. It's a new studio funded by older Ex-BioWare developers, and they have an unannounced game in development.

OUR GOAL IS TO CREATE THE GREATEST STORY-DRIVEN ROLEPLAYING GAMES IN THE WORLD.

Archetype Entertainment is a game development studio in Austin, Texas led by industry veterans from BioWare and other AAA studios. Founded in 2019, Archetype is an autonomous division of Wizards of the Coast. We are assembling a world-class team to build a multi-platform roleplaying game set in a new science fiction universe.
​
At Archetype, we believe there will always be a place for story-driven roleplaying games that put the player at the center of an epic personal narrative with impactful choices. We are building games that represent the diversity of our audience. We also believe that game studios should empower top developers and challenge them with ambitious projects that are shaped by a strong, clearly communicated creative vision. 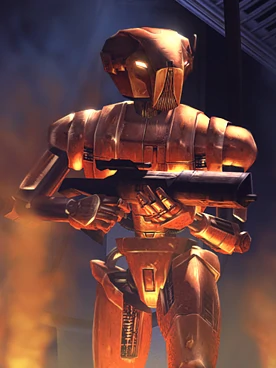 I'd certainly welcome a remake, or better indeed, a new RPG in the same setting! As long as it features HK-47

Did you play the cut content and expansion mods for the sequel? If not get to it.

As HK had a whole mission on a mech planet that was cut.

Doubt it as Obsidian/Microsoft are well known.

January 25th, 2021, 16:16
I would also much prefer new game over remake. Story is important part of single player RPGs and this takes part of the experience away (from those who played it ofc).
Quote

Did you play the cut content and expansion mods for the sequel? If not get to it.

As HK had a whole mission on a mech planet that was cut.

It came at a time I had so much work I could hardly get a normal week-end at home or take any holiday.

Thanks for the tip! I'll have to check that.
Quote

January 25th, 2021, 17:28
Kotor 2 could really use a Remake cause it had so many plotholes.
Sure, with the Restoration Project Mod it's a great Game but i always felt that Kotor 1 was the better polished of the two out of the box.

That aside, i'd really like to see a new Game continuing the Sith War Story following Kotor 2 with Revan and the Exiled.
Quote

January 25th, 2021, 18:28
It would surely have to not be affiliated with Electronic Arts, if it was well done with even a bit more new content, I think it could be successful.
Quote

January 25th, 2021, 19:15
I don't believe in rumors, but Kotor does need a remake. Kotor2 too.
Not because of me, but because youngsters do not want to touch the outdated feel to it.
--
Toka Koka
Quote

I don't believe in rumors, but Kotor does need a remake. Kotor2 too.
Not because of me, but because youngsters do not want to touch the outdated feel to it.

Even better. a VR remake would be ideal for youngsters. Lightsaber not included.
Quote

I don't believe in rumors, but Kotor does need a remake. Kotor2 too.
Not because of me, but because youngsters do not want to touch the outdated feel to it.

I'm not sure it feels that outdated.
--
If you don't stand behind your troops, feel free to stand in front.
Quote

January 26th, 2021, 21:46
Both are still quite playable, in my opinion. Oddly enough while I love the actual combat system in both games, I rarely ever feel an urge to replay either one.
Quote

January 27th, 2021, 23:35
All of these games are getting their remakes and I still haven't played the originals. I really need to do something with that huge backlog!
Quote

January 28th, 2021, 15:41
So I thought about an XCOM-camera KoTOR: Jedis beating the SHT out of each other in turn-based mode with lightsabers.

--
SSI Gold Box-style game, we are working on.
Quote

April 22nd, 2021, 04:30
So… the cat is out of the bag that there is indeed a new KotOR being worked on. Still not clear whether it's an entirely new game or a remake though…

*Edit* He does say "remake" in the video.
Quote

Same video from the link above for easier access.

April 22nd, 2021, 04:47
Wonder what will be changed? Also the developer is Aspyr mostly known for porting games. I remember they handled the new patches for the KotOR games on Steam.

Hopefully it's not a forced protag and keep the option of being male or female. As I recall the official cannon was female at one point and then changed again in the online game.

Disney's also thinking making a TV or movie based on cannon as well.
--
"Wise men speak because they have something to say; Fools because they have to say something." & "What is the secret to eternal happiness? To not argue with fools."
Quote