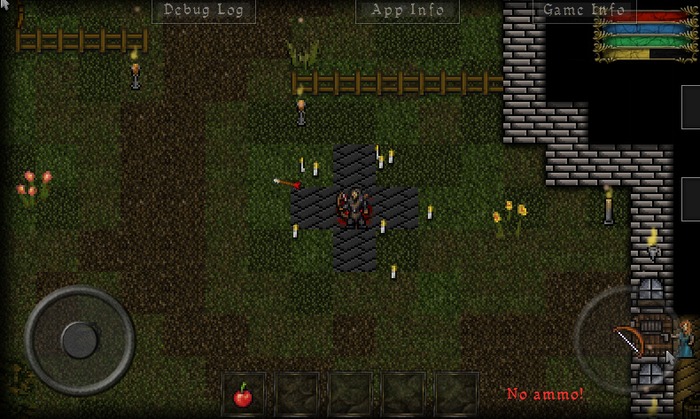 Hey guys! A few months ago, we put up an announcement for the demo release of our upcoming game, 9th Dawn, which is being released for Android, iOS, and the PC. Since then, we've been working hard on the project and have made significant progress and received a large amount of positive feedback for the game.

We have initiated a Kickstarter campaign to help raise funding for various costs associated with the project and also to give our fans and prospective players the opportunity to pre-order a special Kickstarter edition of the game with a few features not included in the Google Play, Amazon, and Apple stores.

To find out more about our game and company, please visit the Google Play page for our game, which features a playable tech demo, and our Kickstarter page, both of which are linked below.

Our Kickstarter
Google Play Page for the Demo

We made this game in C++, coding our own engine on top of the MadeWithMarmalade library. It was exhaustive, but we get great performance and capabilities out of it.The game has lots of features that you don't normally find in a smartphone game, and the action-packed realtime combat system makes it a fun and engaging experience hopefully. We have two videos demonstrating gameplay and other mechanics on our Kickstarter page.

As always, we are open to suggestions, constructive criticism, and general feedback for the game. Just shoot us an e-mail at support@valorware.com. Thanks for looking!

I was on an Android 4.65" phone and found everything to just to to small. On a computer or a 10" tablet it will be playable I'm sure.

Movement on my phone just wasn't good. Aiming was a bit hard and I easily got killed by the first creature I met. Controls are very hard to get acceptable on a phone which is why I prefer turn based games on it.
Quote

December 18th, 2013, 19:33
Played the most recent version on both my iPhone 5 and my iPad 2. No issues with the controls after changing a few in game options. A very fun little handcrafted "openish" world rpg. The graphics and music/sound effects are pleasing. The character development systems are nothing special - 3 classes with 5 points per level assigned to various attributes. Not a lot of depth in the system, but a pretty well done world to explore. Definitely worth the cost of entry.
Quote