March 14th, 2019, 13:32
In a new blog post for Vagrus: The Riven Realms, more information is provided on how news is being delivered in the world of Vagrus.

This time we would like to introduce a brand new game mechanic to you that you will see quite a lot in Vagrus: the acquiring and delivering of news across vast tracts of wasteland. Carrying news between settlements not only makes sense from a gameplay perspective but has its foundations in-world, too, that is, *comitati *are known to have a vital role in distributing news and taking messages all over the continent of Xeryn.

News are tied to settlements: each settlement, however small, has its own News entry. You will acquire the entry for the given settlement when you enter the mansio in it. Alternatively, if you already have the entry in your Journal, it is reset to the freshest state when you enter the mansio. Sometimes you can also find News entries through Events as well - these often give you entries from faraway places.

You can deliver news by turning them in at the [cur]mansio[/cur] in settlements. Doing so will grant you coins depending on the number of entries, their freshness, and your current distance from their source. Note that News entries are not lost when you turn them in but you can not turn them in at that settlement again for a while. Entries can only disappear from your Journal when they lose all their freshness (but this can be reset by acquiring that same entry again). 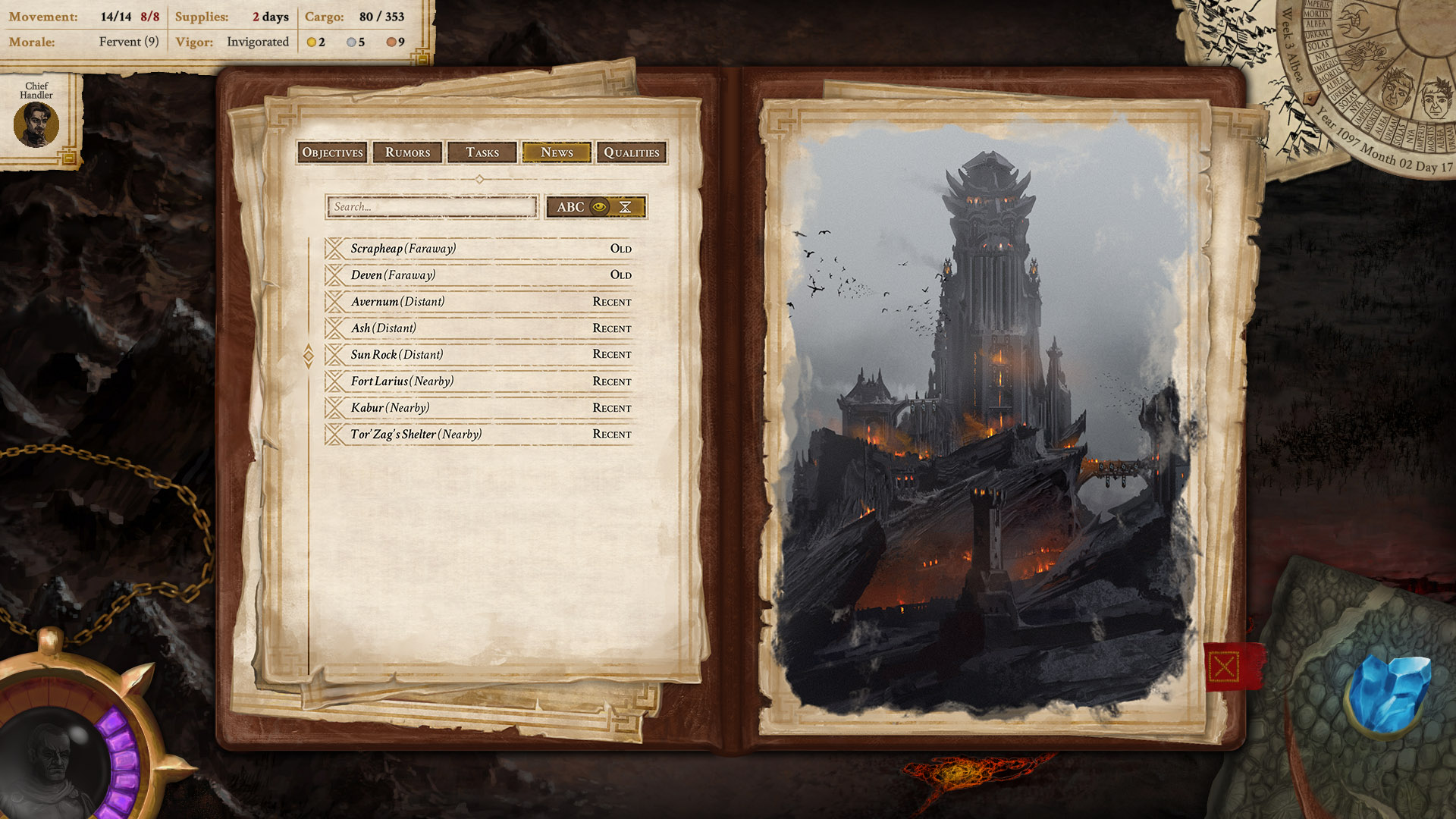 March 14th, 2019, 15:10
I kinda don't understand the point of that game.
Not saying it should have a point to be fun, but from what I've seen on it's steam page it doesn't look like something I'd eagerly wait to get my hands on.
--
Toka Koka
Quote

March 14th, 2019, 18:01
Feel like setting up a news network is kind of 8th or 9th priority, something one would add on when the game is basically feature and content complete.
--
contributed to: Age of Decadence | Dead State | Battle Brothers | Fell Seal+DLC | Stygian | Realms Beyond
working on: Colony Ship RPG | Encased | ATOM RPG+DLC | Black Geyser | Chernobylite | King's Bounty 2
Quote

Feel like setting up a news network is kind of 8th or 9th priority, something one would add on when the game is basically feature and content complete.

Well, looking at it from an importance to the game perspective, you are right. It was not something high on our priority list.
On the other hand, game design is just like any creative process. Sometimes a little voice in the back of your head starts to nag you about an idea. You can force yourself to shut it down, or choose to just let it free for a bit of time in one of your breaks and see where it leads.
That is what we did. Brainstormed about the design for 2x30 mins, then our UI guy put together a mock-up in 15 mins, and by the the end we all felt so happy about it that we decided to share it in a devlog post.
Now, actually implementing the design is something we will prioritize based on importance and work bundle efficiencies. Since based on the players' feedback we need to touch the Journal - which is going to hold the News, beside Rumors and Tasks (future devlog posts) - anyway, we will probably create the UI for the four all at once to make it efficient. Plugging them in to work, will see.
We like to look at ourselves as a team fueled by genuine enthusiasm towards role-playing and cRPGs, and so we time to time allow that passion to take over and just see what comes out. We feel it adds to the game, and also to our team spirit.
Quote