January 9th, 2020, 22:09
GamePressure reports on the development of a new science fiction game based on the literature of Stanislaw Lem. 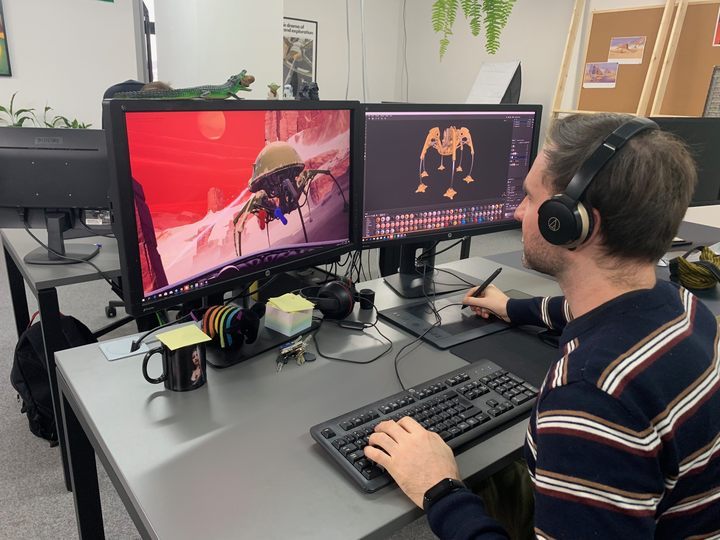 Piotr Mierzwa (hardsurface artist) is designing one of the robots we'll meet in the game.

Indeed, all the displays I saw in the game were old, convex CRTs, and the gadgets I used resembled devices used in the 50s or 60s. Lem imagined the future that derived directly from the present. That's why today, his approach is defined as retrofuturism. Consequently, all the devices in the game are analog. The creators emphasize they devote a lot of time to properly designing the machines - "We wonder how the device should look in order to evoke the analog era. A touch-screen, wireless tablet would be a show-stopper for us."

You can imagine the problems such an approach creates. Just take the map, for instance - Lem had no interactive maps, nor modern UIs that would display points of interest. Things ought to be quite similar in Project I - about the only aid we will get during exploration will be an absolutely regular map, and we'll have to mark navigational points manually. Let's remember - you are a scientists on an alien planet. Your main job is exploration, and that just can't be easy without digital systems. Doesn't such a concept curb creativity? "These limitations create the impression of integrity of the entire game. It requires some effort, but once we finally implement, we get massive satisfaction from creating something that challenges the regular approach; something original," explains Marek Markuszewski.

Fallout ofc is the big gaming example, Bioshock and Dishonored as well maybe. But that's it with the bigger ones.

Currently I am playing Insomnia, which (except of it's bugs) is quite a cool game which has a really unique and dense atmosphere in a "Dieselpunk" scenario.
The last couple of days I am also watched several Jules Vernes Movies and I find it somewhat fascinating how people in the past imagined the future, or content of unexplored areas.
Ultima 6 had this spinoff called Martian Dreams. While I never played it, I find it quite intriguing to be shot to Mars and explore the native Martian Cities, which as we all know had to exist there (like Dinosaurs have to be on Venus, right?), meet Tesla and other people from times of exploration and experimentation.

So I welcome any new game (and movie) which has a interesting alternative setting.
--
Doing >Let's Plays< and >Reviews< in German. Latest Review: Pathway
Mostly playing Indie titles, including Strategy, Tactics and Roleplaying-Games.
And here is a list of all games I ever played.
Quote

January 10th, 2020, 10:04
Yeah, I've only read one Lem book, Return from the Stars. The underlying idea, setting, and philosophy of safe-utopia vs the driving-force-of-risk was pretty interesting, sure, but I found the characters and actual story mind-numbingly boring so I never tried any of his other works. Maybe that was the translation, maybe it was the underlying original story - I don't know. Might be that something interesting could be made out of his world-building?
Quote

January 10th, 2020, 11:56
Am a bit sad that a game based on Lem's work is concentrating on low tech equipment, retro future, and… you know… the non-essential stuff.

Where is the soul of Lem's works in this game?
Lem was more of a philosopher than a hardcore sci-fi writer, so if I'd play a game based on his work, I'd want to experience his thoughts rather the (very limited) action in his novels.

In doubt?
Read Solaris (IMHO his best book), then compare Tarkovsky's Solaris movie with Sodenbergh's Solaris movie.
One of them totally misunderstands the source material. Which one is it?

Am a bit sad that a game based on Lem's work is concentrating on low tech equipment, retro future, and you know the non-essential stuff.

Precisely my thoughts. I suppose Lem was smart enough to realize that good Science Fiction does not have to be about fancy technological gadgets, but rather about confronting human characters with settings and situations merely brought about by the use of advanced science and technology. Hence, presumably he felt no great pressure to extrapolate certain technology.

It's a bit silly to misinterpret that as a conscious decision in favor of "retrofuturism" on the author's part, and almost feels a bit like a Cargo Cult. After all, punch cards were pretty much cutting edge computer technology at the time.

Still, if they focus on exploration aspects (and hopefully not on shooting steam-powered robots with flintlock pistols), this might be worth a closer look.
Quote

In doubt?
Read Solaris (IMHO his best book), then compare Tarkovsky's Solaris movie with Sodenbergh's Solaris movie.
One of them totally misunderstands the source material. Which one is it?

Tarkovsky went with style to extreme, risking alienation of the audience. Deliberate or not, it was a brilliant move - Solaris was never supposed to be appreciated by pigs, they can't understand any of it. His adaptation requires patience, and that's something facebook's drones don't have.
Sodebergh's version was basically concetrated on the irrelevant "romance" while ignoring everything else that made the book great. If it was released under a different name, I'd say today it's a decent scifi flick. But it did not deserve to be titled Solaris - because it was, I say skippit and forget it exists. Unless you're a rare beast who watches scifi only for romance instead of playing alien dating sims (mass effect).

IMO Lem's name is (ab)used only to create some buzz. From a project that is trying to be an author instead of a specific work, I expect a turd.
--
Toka Koka
Last edited by joxer; January 10th, 2020 at 14:36.
Quote

Here we have a bookauthor2game adaptation. How many of such games you know about? Is there a sci fi game based on Arthur Clarke or a game based on Isaac Asimov?

For the record, there was a game called Rama based on (gasp!) Rama by Clarke. It wasn't a terribly good game (I liked it though), but at least it was quite faithful to the original book (Clarke himself was involved in the making)
As for Asimov: I think in the early 80s there was a text adventure based on his Robot universe, but I don't remember clearly.

But let's not go this far: There was this unknown game STALKER, based on the Strugatsky brother's best work (Roadside Picnic) and/or Tarkovsy's famed movie Stalker (YMMV) -- and while the game was interesting on its own merit, I still hate it for raping the excellent source material.
Quote

Many book2game works do exist ofc. TW3 is one although not scifi.

FYI, there are many examples for this "author2game" stuff, e.g.:

The Witcher games, as the games happen after the books storyline, and even deliberately alter some of the original lore for the sake of the gameplay (dual sword, etc)

Moreover, Douglas Adams did a direct-to-game work with Buerocracy and Starship Titanic. Not good games, but the author's original style shines through.

Also worth mentioning is Discworld Noir, where Terry Pratchett was not involved at all, but the game brilliantly used his Discworld setting in a totally original story.

Finally, Betrayal at Krondor was a game based on Raymond Feist's Midkemia stories, mainly written by one of the game designers -- and then, Feist himself transformed the script into a book. Go figure

January 10th, 2020, 17:36
Retrofuturism is lazy development because you don't need to be inventive about the technology. But if that makes the rest of the game better, then it's probably a good thing.
Quote

January 10th, 2020, 21:54
I loved reading Lem, especially The Invincible and Fiasco. While I can see where the doubts come from, I'd still hope they get it right.
Quote

January 13th, 2020, 03:10
I've read some Lem books. There's a lot of philosophy and humor which sometimes works and sometimes not so much.

The main character of Project I will be a scientist. Not a soldier, not a mercenary – our main goal, at least initially, is exploring and probing an alien planet and uncovering its big mystery.

We've known that Starward Industries are making a game based on Lem's book for a while. We can't disclose which book that is just yet, so expect a surprise.

Well, it isn't Solaris. That was an ocean world and this looks more like a desert. My bet is on Eden.

It's Lem so expect some seriously weird aliens.
--