In this dev log, I'm going to give you a little sneak peek of what character customization will be possible in the new engine. Today, I'll only be showing and discussing male characters, but you can expect analogous customization for females as well.

As I mentioned in the previous dev log, we're now using PBR (physics based rendering) for characters. Might not be that apparent in the screenshot below, as all the characters are naked, but it'll definitely make a lot of difference once we start equipping them with gear made of different materials.. 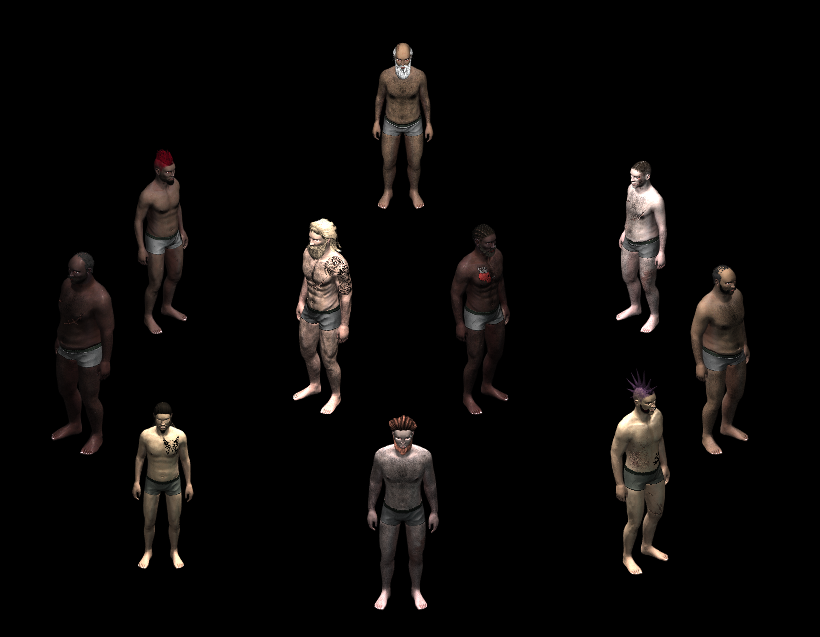 Of course, first and foremost, you'll finally be able to pick a skin color. Then you'll be able to select your hair style, beard and mustache styles and colors. Both skin and hair colors will be chosen from a predetermined list, so no orc, alien, or other unnatural silly characters will be allowed.

You'll also be able to choose a face from a predetermined list, though this will probably have the least visual impact due to the size at which models are rendered.

Characters also support having piercings, tattoos, scars and the like, but we'll see how we're going to make these accessible to player. For the most part, you'll probably not be able to choose these at characters creation, but will instead have to earn them along the way.

The most important feature, for me at least, is the body type variety. This you will not be able to pick freely, but instead, your visual body type will correspond to your physical attributes: strength, agility, and constitution. Strength will make you bigger, while agility will make you leaner. Constitution has a more complex interaction with your visual appearance as it is both a measure of physical sturdiness and endurance.

These things will also, generally, apply to the NPCs, so you'll be able to gauge their physical properties from their appearance.

That's it for now. I know a lot of you are very interested to see some environment screenshots, so hopefully we can get those out relatively soon as well. I think you'll be quite impressed with the upgrade from the previous game.

Staff Member
Moderator
RPGWatch Donor
Original Sin Donor
From my perspective this fame is butt-ugly. Customising my character is the least important thing they could be doing....

Original Sin Donor
I still need to fully play through the first game. It's one of those titles I really enjoyed when I tried it, but for some reason it never makes it to the front of my queue.

I like the visual style of Underrail despite the simpler aesthetic. I hope he doesn't lose that in the switch to 3D.

I still have to finish playing the last Underrail expansion. The switch to 3D is welcome in my book. Just keep everything that made the game good with a new paint job.
"Opinions are like assholes. Everybody's got one and everybody thinks everybody else's stinks."

I dont care much about eye candy, as long as graphics helps set the atmosphere in right way. This game is in my backlog since release, but still didnt get to play it. Too many games out there and too little time. At least I know what will I do in retirement
C

I care nothing at all for appearances, I'm all about content, exploration, quests, etc. Give me a fun text game and I'll be happy for months!

I hope their improvements can make me enjoy this one. The original should've been right up my alley, but I just got so bored by the backtracking and the slow, repetitive fights. Better visuals, music and sound effects could probably make an impact for me even in the original.

About the dev log itself, I don't see why they have agility making people leaner. There's no big connection between agility and being lean, so why do it that way?

Yeah one big drawback was the constant back tracking, but the developer did implement a in-game mini-map. It just wasn't that informative or user friendly for most players.

If I remember this was a design choice by the developer.

"Opinions are like assholes. Everybody's got one and everybody thinks everybody else's stinks."

Couchpotato said:
Yeah one big drawback was the constant back tracking, but the developer did implement a in-game mini-map. It just wasn't that informative or user friendly for most players.

If I remember this was a design choice by the developer.

When I played the game, I didn't know the mini-map was implemented later, but I wouldn't have played the game without it. It's way too confusing otherwise.

I'm another member of the 'Still Have to Finish This Game'-Club, which says a lot! Didn't have any of these problems with Monster Train, Blackguards I-II, Urtuk, Dark Quest 1-2, Vandal Hearts 1., Sanctus Reach, and a handful of amazing smaller Steam tactical fantasy and space bounty hunter games.
SSI Gold Box-style game, we are working on.
You must log in or register to reply here.
Share:
Facebook Twitter Reddit Pinterest Tumblr WhatsApp Email Share Link