So, I thought I'd start the World Cup 2022 thread. I know it's a while away starting on the 20th of November, but was wondering what people thought about the teams.
Groups are as per below: From my limited knowledge, I think it's very likely the following would get out of groups, and then I think it could be anyone's game:
- Netherlands
- USA
- England
- Argentina
- Mexico
- France
- Spain
- Germany
- Belgium
- Croatia
- Brazil
- Portugal

From those, I would expect however that Spain, Germany, France, Belgium, Brazil, Argentina and the USA to get farthest.

RPGWatch Donor
Original Sin Donor
Original Sin 2 Donor
Nah, sorry to say, but Belgium's not looking like they're in their best shape. Their group should also not be underestimated: Canada for example have a few really good players.

I'd say the Dutch are the lucky ones with their group, they're pretty much guaranteed to steamroll group A and I expect them to get far (as I am sure they expect as well).

I'd say Brazil is my clear favorite to hoist the trophy (again) though.
Exitus acta probat.

Sorry if there are any qatarians? here but fuck Qatar or fuck FIFA or whoever decided to be played there; rain is a big part of the beauty of football and since there it rains once in 50 years, yeah fuck the desert.
Steam
Favorite game Witcher 3/Gothic 2

RPGWatch Donor
The last two World Cups were bought by Russia and Qatar. I'm going to have a hard time watching this World Cup knowing how many people died making the stadiums and how corrupt the old FIFA officials were.

The USA is playing really badly right now and if they don't wake up they won't make it out of their group. Wales could easily beat them. I think France is the favorite but maybe the Dutch can get over the hump one of these years.
"From knowledge springs Power, just as weakness stems from Ignorance."

I feel sick over how corrupt FIFA is, I really really love the world cup, but I'll probably boycott it this year.

TBH, I think FIFA has always been run by smarmy crooks, and I doubt there's been a World Cup hosted without the giving and receiving of suitcases full of unmarked bills.

RPGWatch Donor
Well Ireland won't be there which I suppose is a good thing considering the circumstances. Terrible to admit but I will probably watch despite the despicable things that have happened around it. Still if you are willing to give the world cup to a homophobic dictator who has since decided to invade a country hard to be shocked if they go for 2 for 1 and sell it to Qatar as well.

As to the football looks like my ex-European neighbours have an easy enough group but they are saddled with a cautious manager wasting what is possibly the most gifted attacking players of a generation so unless they get the kind of draw after the group that they got in the last 2 tournaments I suspect they won't do as well. If they win I'll have to avoid watching British TV for a few years Could be a close run thing between Wales and USA for the second spot. Are there qualification spots for best third places here?

Groups E and G look like the tightest or most qualified for the title of 'Group of Death'. The usual suspects will be there in the end. Germany (not as good as they once were but it's all about mentality and they always have that), France, Brazil. Tough group for Argentina with both Mexico and Poland but I must admit to see Messi lift the trophy would make my year.
I

I think it will go to either Brazil, France or Argentina but a surprise can always happen. Hopefully Serbia gets out of the group stage but it will be tough. We'll have to beat the Swiss but I wouldn't underestimate Cameroon either. Brazil I expect to win the group easily, they have a great squad, as always.

As for the other groups, Netherlands has the easy group. In group B it will be a fight for the second place between Wales and USA, but I don't expect England to go far if they get a tougher opponent in the knockout stage. They have a great squad on paper but they don't play consistently good together for some reason. One bad game and it's game over for them. Group C is Argentina's with Mexico winning second place, group D is France and Denmark who I can see possibly getting to a semi-final or even a surprise final.

Group E is Spain and Germany but I don't know in what order. Group F, I expect Croatia to win, Belgium's golden era is starting fade and they are not as good as the were 5-10 years ago. They could even possibly lose the second place to Canada who are playing really well. They easily won their qualification division ahead of USA and Mexico who really struggled. And group H is easily Portugal and Uruguay, and I can see Portugal getting all the way to the semis.

It will probably be the last international tournament where we'll see both Ronaldo and Messi and is the one tournament neither has won so I expect them to play their best so we can expect to see some beautiful football.
B

RPGWatch Donor
I wouldn't write off Poland as long a Lewandowski is there. They could pip Mexico to second. Hard to know what to expect from Ronaldo since he isn't starting regularly for Utd. but you can never underestimate him. 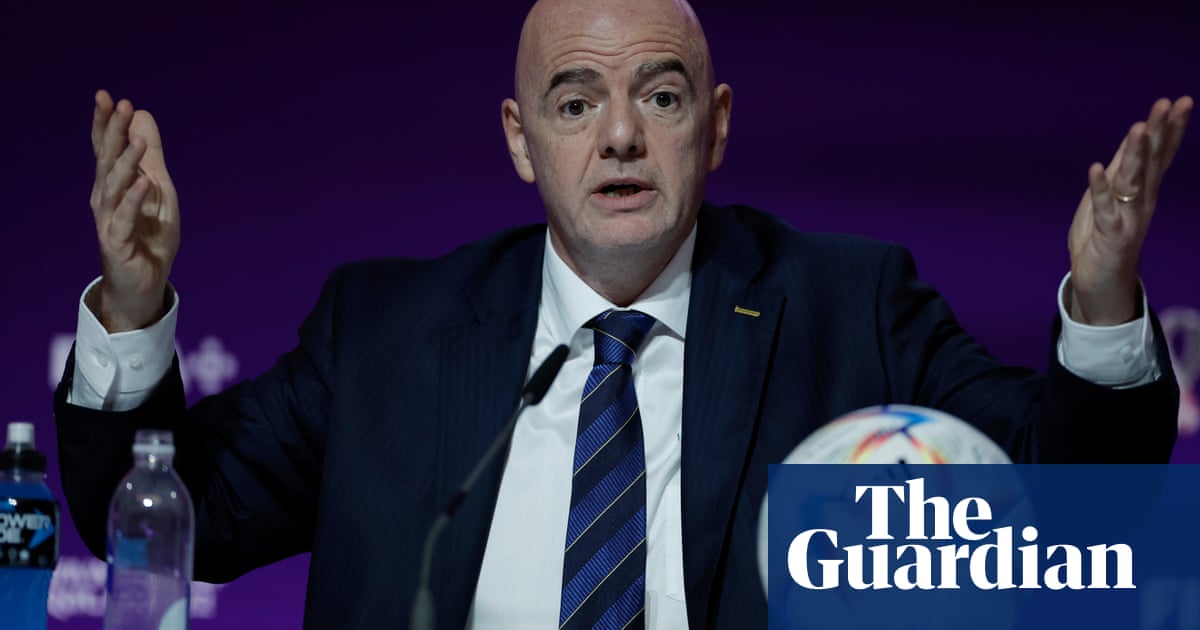 ‘I feel gay, disabled … like a woman too!’: Infantino makes bizarre attack on critics

The Fifa president, Gianni Infantino, has hit back at criticism of Qatar from Europe in a press conference on the eve of the World Cup

HiddenX said:
I have decided to ignore this world cup.
Click to expand...

I assume because it's a money-driven shitshow.

Shame this is likely to be Messi's last

Drithius said:
I assume because it's a money-driven shitshow.
Click to expand...

If so then HiddenX should/must have skipped, what, the last 8 World Cups (at the very least)?
Sou tricolor de coração!

Anyway, you're either going to watch it or you're not. I might tune in if Argentina makes it to the final, but otherwise I'm not overly interested in adding to ratings and FIFA's leverage for bargaining in future Cups. Especially after Gianni's blowhard commentary.

Drithius said:
Anyway, you're either going to watch it or you're not. I might tune in if Argentina makes it to the final, but otherwise I'm not overly interested in adding to ratings and FIFA's leverage for bargaining in future Cups. Especially after Gianni's blowhard commentary.
Click to expand...

By the way, are you Argentinian ? (just asking)
And about Infatino's commentary, oh yes that was shameful, totally wrong.
About those allegations of Catar trying to bribe Ecuador Team, are they truthful?
Sou tricolor de coração!

henriquejr said:
By the way, are you Argentinian ? (just asking)
And about Infatino's commentary, oh yes that was shameful, totally wrong.
About those allegations of Catar trying to bribe Ecuador Team, are they truthful?
Click to expand...

No, not Argentinian - Portuguese actually (and I hate Ronaldo ). I hadn't actually heard about the bribery allegations. Crazy if true, but I'm not seeing it corroborated by many sources.
I

I agree that this one is distinctly the worst, but every WC I can remember was marred by corruption and scandals. If I remember correctly there was also the talk about workers' conditions at the Brazil WC in 2014.
C

I know all about the indepth corruption, yet I still have to watch my football. It's a way of life

Staff Member
Moderator
RPGWatch Donor
Original Sin Donor
As in the previous one was in Russia where we know what's happening today, right ?