Aeon of Sands: The Trail - All News

RickJoystick checked out the oldschool dungeon crawler Aeon of Sands: The Trail:

Aeon of Sands - The Trail Review

Forgottenlor chatted with the developers of Aeons of Sands: The Trail, for the Indie Showcase series of interviews.

Florian is a Software Architect and Software Developer and responsible for technical direction, game-mechanics and programming.

I (Marco) am a draftsman and illustrator by trade and a social narrative artist; I'm responsible for game direction, story, visuals, testing and audio editing.

Concept and engine prototyping from 2012 to 2014, plus six months for the first draft of the game's story (the bulk was more than 80,000 words, and it grew ever since).Then 3 years of production: all the graphics and mechanics, and a lot of testing and polishing.

The developers of Aeon of Sands were interviewed by Matt Chat.

This episode features gameplay and commentary about the game Aeon of Sands: The Trial by Matt and Marco Pedrana of Two Bit Kid. It's a great new CRPG in the vein of early Might & Magic and Lands of Lore, but with a post-apocalyptic setting.

The dungeon crawler Aeon of Sands - The Trail is now available on Steam:

Aeon of Sands - The Trail

We are happy to announce the release of our game "Aeon of Sands - The Trail". After 6 years of work it's finally done!

The Last Game shows the first 30 minutes of the upcoming dungen crawler Aeon of Sands: The Trail:

The Trail is a retro low fantasy RPG set in a post-apocalyptic world, with first person, grid-based exploration, puzzles, real-time combat, and a fully illustrated, non-linear.

Aeon of Sands now has a release date of December 4th. Check out the Steam page here.

Aeon of Sands - The Trail is a retro low fantasy RPG set in a post-apocalyptic world, with first person, grid-based exploration, puzzles, real-time combat, and a fully illustrated, non-linear story.The game follows the misadventures of a likeable slacker, who is suddenly thrown out of his cosy home into a terrible, infinite desert that seems to hate him.

Accompany the vain, nap-loving clerk Setrani through his story.
Guide his travels over a dangerous land, ravaged by the weather and by tribal enmity. Struggle with him, as the desert's wicked sense of humor and unpredictability set him trap after trap on his path.
Setrani is introduced to new situations via multiple choice illustrated dialogues.Based on your decisions, new areas can be explored while other become inaccessible, you meet new companions or make enemies of them.

Aeon of Sands - Steam Page Up

The Steam page for Aeon of Sands has appeared. No release date has been listed yet.

Aeon of Sands – The Trail is a retro low fantasy RPG set in a post-apocalyptic world, with first person, grid-based exploration, puzzles, real-time combat, and a fully illustrated, non-linear, choose your story adventure.

The game follows the misadventures of a likeable slacker, who is suddenly thrown out of his cosy home into a terrible, infinite desert that seems to hate him.

Accompany the vain, nap-loving clerk Setrani through his story.
Guide his travels over a dangerous land, ravaged by the weather and by tribal enmity. Struggle with him, as the desert's wicked sense of humor and unpredictability set him trap after trap on his path.

Setrani is introduced to new situations via multiple choice illustrated dialogues.
Based on your decisions, new areas can be explored while other become inaccessible, you meet new companions or make enemies of them.

How many levels does the Aeon of Sands - The Trail have?

We could answer that with a number, which is higher than 60, but that tells only a misleading (or partial) story. Aeon of Sands is not a game where you face one level after the other in a linear way.

You will see the desert landscape, obscure mazes, from small to large size, fast paced arenas, nested in about 20 sites spread across the world. During one play-through, you see between one third to half of them, based on the choices you take during the extensive choose-your-adventure part.

The reason for that is that we developed a much more bigger game than you can see in one playthrough. So you can play the game only once to create your unique storyline, or repeatedly to discover different sides to it.

We wanted to give the player the opportunity to make real choices and and we wanted these choices to create the explorable paths of the world for him; your story choices create the game areas: it opens some paths and closes some others.

How long has the development taken so far?

Starting in 2012, about 2 years of research, planning, story and pipeline (how to get the exact old-school look and feel), followed by 3 years of implementation (code, graphics, gameplay, story, audio), and almost 1 year of beta-testing and polishing.

The development of Aeon in some numbers, (as of the moment of writing):

Aeon of Sands is coming soon to Steam although no date has been announced yet.

@IndieRetroNews Aeon of Sands is a love letter to dungeon crawlers.

Grimoire isn't the only game we should be talking about today, as we've also heard from the developers Two Bits Kid, based in Germany, that the dungeon crawler ' AEON OF SANDS ' is basically finished, although 90% of the mazes are in alpha state with all dialogues and graphics. Now for those of you that haven't heard of this game before, this dungeon crawler harks back to the days of Eye of Beholder or Lands of Lore and is a "Dungeon Adventure" story-driven RPG love letter to the golden Amiga, PC classics of the 90's.
[...]

The release of the dungeon crawler Aeon of Sands: The Trail seems not so far away anymore:

As you can see, we're not very active on socials in this leg of the year: between working on the dungeon crawler's parts of the game and creating a 2.0 site and forum from scratch (more about it soon-ish), we do what we can.

One could argue that, marketing being most important, you're never too late to do it properly.
Personally, I embrace our anti-hero philosophy of non-achieving, and made peace with things I cannot handle at the moment.

So, THANK YOU for keep checking this page and our other online caves and huts, with a frankly encouraging patience, to see if we are getting somewhere :)

One thing we do handle on the development front, though, is bringing Aeon of Sands to the finish line with each day' work!

We aim to have the whole game playable, from start to finish, between the holiday season and early 2017, and after that, polish it  and test it extensively!

And maybe, just maybe, learn how to market it in the meantime, so that we don't end like the guy in the animation here, devoured by large crows, while trying to sustain himself with not-edible mushrooms in the wilderness...

Aeon of Sands released a progress update recently. They have been working on opponents, text presentation and a new dynamic light system. 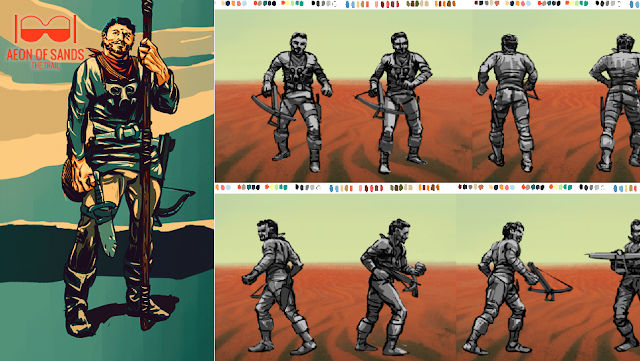 A major NPC, Harro, from the concept to the greyscale animation.

Take the example above: that's Harro, a city guard, a soldier of the domed city where the game starts.
He was first imagined, character and purpose, as part of the game story in 2012; then his appearance designed the next year, you can see it in the left of the image, as his dialogues were written.

Last month he was finally greyscaled in animation, and these days he gets colored and completed.

The animation of the opponents is an ongoing task. The completion of the last ones will take us somewhere around the month of july. With that, all the graphic assets will be finally done!

There's a feeling of exhilarating freedom about it: >90% of the graphics are there, the engine is ready, the A.I. gets finetuned every week, and new mechanics implemented.
Now we can finally construct more complex scenarios, stage more challenging fights and have fun adding puzzles that we talked about for months.

Aeon of Sands - A Dungeon Crawler

We have recently been made aware of the game Aeon of Sands: The Trial, which is currently in development by two persons. The game is schedule for release in 2015 and claims to be in the style of the classic PC and Amiga dungeon games of the 90s.

Aeon of Sands is a "Dungeon Adventure": a story-driven role playing game and a love letter to classic PC and Amiga games of the 90s.

"The Trail" is the first chapter of the Aeon series, in which you follow the adventures of a young city clerk in a world that is orbited by two suns. The clerk Setrani is sent on a investigative mission: the search for a missing diplomatic caravan in a territory ravaged by bandits. Will he track it down? And what if he does? Will this save the dome city from the fall of its sacred tree?

Explore the long shadows of the gigantic Kinami tree, which is the sacred totem and protector of mankind. The world is permeated by a magical energy that is absorbed by all beings and things. People use items to adopt their magical energy. Magical items produce different effects depending on the ethnic group and their current magic skills.