The May progress report for Cyber Knights: Flashpoint talks about production milestones.

We’re waving goodbye to May and welcoming June and so it is time for another monthly progress report. We’ve been in a ton of areas, including improvements in animation integration, level building and automation tooling to help our team develop content for the game faster.

During May we made substantial progress testing our over-map story and dialog system which is used to inject story events and mission chatter directly into the game map. This required some new loading and asset management code, to ensure that both characters on the map and characters off the map (like your team’s Face and Contacts) were still able to appear correctly.

Another feature that saw significant improvement during May is the snap to cover movement mechanic. While Cyber Knights: Flashpoint is tileless, we’ve found in testing that a snap-to-cover mechanic is a necessary one to ensure player’s expectations are met in regards to taking cover and controlling sight lines. When combined with raycast based line of sight detection and feedback about targets, snap-to-cover gives us a best of both worlds hybrid with the benefits of tiles where players would use them, and with the freedom of tileless where players would want it.

Our animation team is completing an overhaul of the weapon’s targeting suite during May to allow characters to raise or lower their weapons up to 45 degrees when selecting high or low targets. Using reference frames and additive animation techniques, the engine can dynamically slide across the scale between straight out aiming to high or low or anywhere in between.

As our first set of playable levels comes together, we’re working hard to make sure they’re as beautiful as they are playable. We’ve just completed our first four ambient-only lighting setups which will act as the baseline lighting for different levels and thematic feelings established. Unity provides a rich set of tools for both lighting and color grading and we’re experimenting with different tools to apply LUT and color correction in both cut-scenes and gameplay. 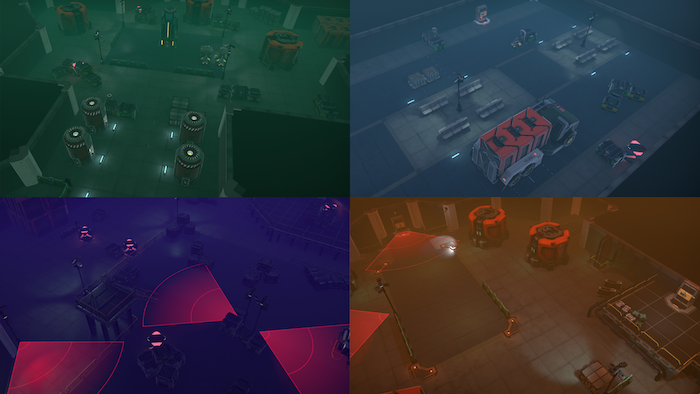 May also included some heavy lifting on our shader implementation which is a critical pre-alpha task. Finalized physically based rendering (PBR) shaders that are both performant and beautiful and still support our feature requirements are necessary for all the Cyber Knights: Flashpoint platforms to live together. We’re experimenting with replacing our custom, hand-built shaders with more flexible ones created in Amplify Shader Editor which might give us more flexibility as we approach the wide variety of platforms and hardware in our target set.

Our team has grown substantially for Cyber Knights: Flashpoint, but the core machinery of the studio is still the two of us, Andrew and Cory. We don’t really plan to change that for Cyber Knights: Flashpoint, and so we continue to put a major focus on automation wherever possible. In May, one area that got some serious attention was the Level Builder’s light probe placement and alignment system. The levels and environments you’ve previously seen us demonstrate and show off to Executive Producers and Twitch streams have all used manually placed probes, which we’ve found takes a lot of time to create and maintain. Recognizing that we will need MANY levels for Cyber Knights: Flashpoint to live up to our ambition, we’ve created a new light probe automation layer that will save many hours and deliver a level of fidelity in probe placement that would be challenging to achieve consistently by hand. 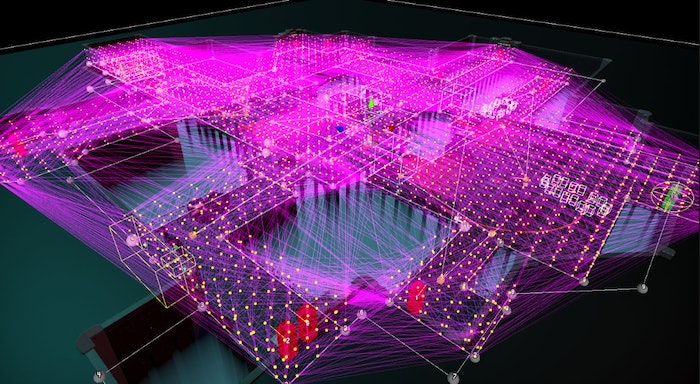 Each dot in the screenshot is a light probe -- I think we want to automate this one :D

Indie developers Trese Brothers are set to release their second game in 2021, a cyberpunk tactical RPG titled Cyber Knights: Flashpoint. Cyber Knights will interweave the story of an elite team of "hackers, mercs and thieves" with deep game systems and XCOM-esque tactical combat that includes stealth and hacking. The kicker is that the game has procedural elements, much like Trese Brothers' highly-regarded previous game Star Traders: Frontiers. These generated elements in the story and combat mean that Cyber Knights aims to be highly replayable, giving you a new cyberpunk story each time.

Asked to say what makes Cyber Knights stand out from other tactical RPGs, developer Andrew Trese told PC Gamer that it was an emphasis on "Deep systems and extreme replayability," noting that it had "Heist-style missions with a distinct planning phase and balanced mix of stealth, hacking and combat in encounters."

It has been a little longer than we expected since the last update -- a month and 3 days -- but we’ve got a massive slew of news today including new artwork, the snow leopard reveal, exciting language pack plans, details about the first upcoming Exec Producers meeting, reward deliveries and more. We've got at least one more Kickstarter update scheduled before the end of June, so we'll keep the pace a little more snappy.

With that much to cover, let’s get going!

Thanks to all of our backers, we unlocked cyber cats and the Assassin Job at the $225,000 stretch goal. Even better, we decided to unlock the additional cat breed from the $235,000 goal as well -- because, two cats are better than one! And then, in a run off between three possibilities, you voted for the Snow Leopard to be the additional cat breed.

And that leads us to today, where the concept art team -- led by some cat lovers! -- has delivered this amazing piece for the snow leopard design. What a beast! Clearly, this will not be an easy cat to find and recruit, but to have such a majestic animal at your Assassin’s side will never grow old. 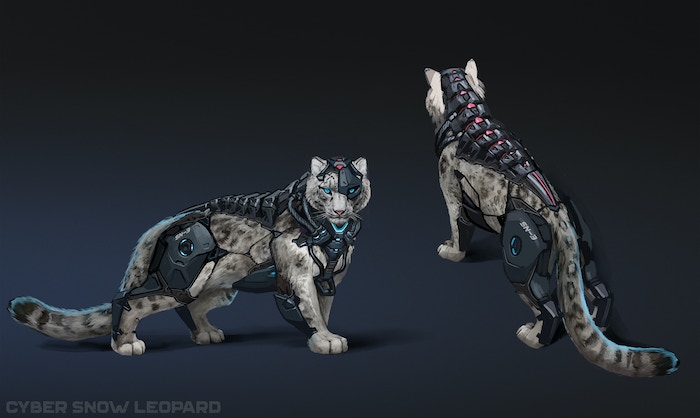 Since the close of the Kickstarter, we’ve been extremely busy building new engine components and adapting our workflows and content building systems for Cyber Knights. These are some major tasks that will set the foundation of Cyber Knights and include items like rewriting our UI toolkit and establishing a proper text management system within Unity.

Each of our future Kickstarter updates is likely to touch on the results of some of these major engineering tasks. Today, we’re excited to share our plans and progress for translating Cyber Knights: Flashpoint into many languages. Despite being only available in English, our previous game Star Traders: Frontiers has a large international fanbase and we’ve always hoped to be able to translate the game for those players. However, this is much easier when we have a fresh start and this Kickstarter and Cyber Knights has afforded us that opportunity.

Flashpoint will feature a diverse set of character classes with unique traits. What philosophies do you take into balancing elements like leveling and character class?

Andrew Trese: At a high level in the game, we are balancing player agency—picking the exact bonuses from your level and class—with gameplay-driven impacts like gaining Traits in reaction to your actions or things that happen to you like getting shot or shredded. The interplay between these two create all sorts of new opportunities and enticing angles for players to explore. It’s one of the most exciting parts of our core RPG system which we call the Motivation Engine.

Your promotional materials suggest the game might come to consoles as well—have you spoken with any representatives at Sony, Nintendo or Microsoft?

Cory Trese: We have had some preliminary discussions, and we have a good working relationship with Microsoft, Nintendo and in the past, Sony. We’re working on a port of Star Traders: Frontiers to the Nintendo Switch and we discussed an Xbox port with Microsoft. Nothing is certain for Cyber Knights: Flashpoint, and that’s why we didn’t make any firm promises in the Kickstarter, but based on our experience with Star Traders: Frontiers we believe those ports are pretty likely.

Do you have any interest in developing multiplayer games in the future?

Cory Trese: We absolutely do have multiplayer dreams. We both have enough experience as software engineers to know that multiplayer isn’t free—and supporting multiplayer infrastructure to a level we’d be proud of won’t be easy or free. For us to release a multiplayer game, we’d need to be confident that it could live up to our standards of quality and support over the long-term. Secretly I want to make sci-fi ARGP MMOs but I’m not willing to bankrupt the company trying to make them.

Missions in Cyber Knights will be both handcrafted and procedurally generated. So you can replay a quick scavenger run multiple times and enjoy a fresh experience every time. Or you can reattempt a more complex operation using different tactics to try for a different outcome.

Prepping before heading into a mission can mean the difference between victory or failure. In order to nudge the odds of success in your favor, it will often be advisable to bribe a security agent, forge security passes, hit up a contact for a stolen passcode, or purchase a virus from a hacker to disrupt the security network of your next target.

Weaponry in the game is stronger than defensive armor. This means that taking hits even a few times during a firefight can lead to serious injuries to squad members or, even worse, elimination from the fight. So your goal is to not get hit. You will need to use traditional turn-based tactics such as combining long- and short-range weapon use and taking advantage of cover, high ground, and overwatch if you want to come out victorious. Utilizing the game’s stealth mechanics to take out lone enemies without alerting their comrades will also be key in gaining the upper hand during missions.

Cyber Knights Flashpoint has funded in 12 hours and has posted stretch goals. 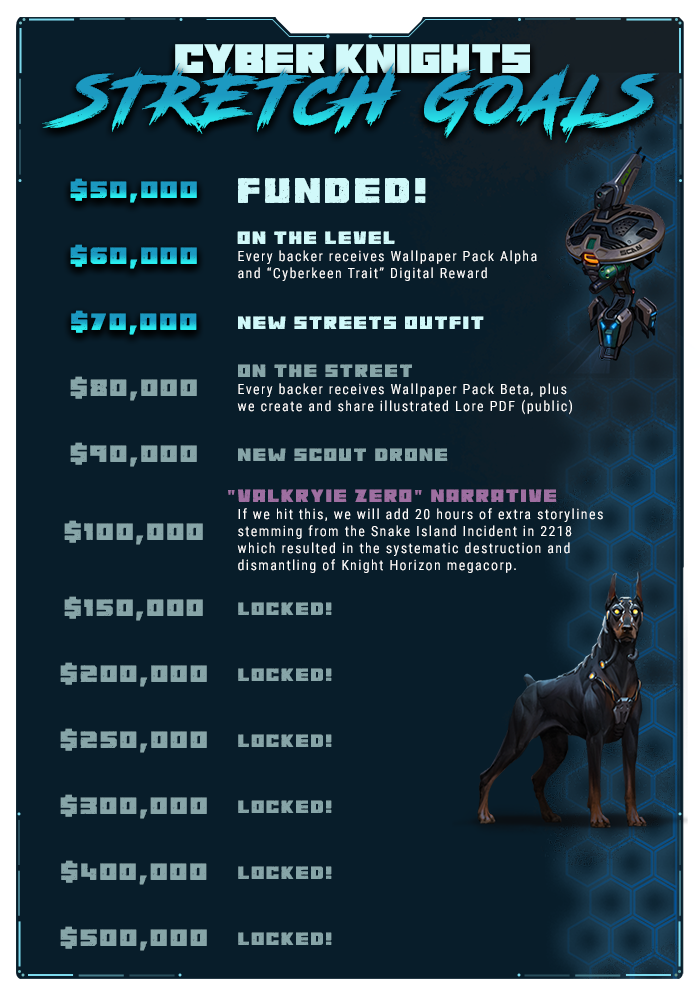 Andrew and I will be hosting an AMA (Ask Me Anything) on Reddit tomorrow in the /r/pcgaming subreddit at 11AM EST. Watch our Twitter, Discord and Kickstarter page for links to the Reddit around that time. In attendance will be myself, Cory Trese (Design, Development, Dinosaurs) and my brother, Andrew Trese (Creative Director, Art Director, Pumas) answering any questions you might have. We’ll be around for at least the first four hours, and then we’ll jump over to Twitch …

Trese Brothers has led Andrew and I on a pretty wild adventure between 2010 and 2020, and “How did you get here?” is a question we’ve heard from backers this week. We figured one of the best ways to share that journey is to sit down and tell the story, together. We’ll be co-hosting a Trese Brothers stream on Twitch, at 4PM EST. There will be stories, jokes, toasts and roasts as we recount the decade that made Trese Brothers what it is.

Explore the dystopian cyberpunk future of 2231 as you command a company of shadow mercenaries working for the highest bidder. Cyber Knights wraps a world full of consequential story choices and significant character development around a rich core of classic and new mechanics.
The game combines tactical elements like stealth, hacking and tense combat with strategic features like base building, contact management and in-depth squad customization. Cyber Knights invites you to jack in and explore a unique cyberpunk world and the immersive, human stories of your merc team in the dark future of 2231.

Cyber Knights: Flashpoint is a turn-based squad tactics gameset in the dystopian cyberpunk future of 2231.

In less than seven days, we will be launching our next Kickstarter, Cyber Knights: Flashpoint, for PC (Windows, Mac, Linux) and mobile (Android, iOS)! The campaign will go live and start accepting pledges at noon EST on Monday, February 3rd.

As a member of our core community, we want to ask for your commitment to pledge on day ONE so that we can have the strongest launch possible.

As a special incentive, If you back Cyber Knights within the first 48 hours of the campaign, you’ll receive a digital code to unlock the starting storyline expander, “Horizon Cypher”. This optional expanded storyline adds a major twist to your first weeks after your cybernetic surgery and transformation into a Cyber Knight.