Empire of Sin - All News

Davo checked out Empire of Sin:

The Strategy-RPG Empire of Sin has been released:

This character-driven, noir-inspired game puts players smack dab in the glitz and glamour of the roaring 20s, all while working behind the scenes in the gritty underbelly of organized crime. It’s up to you to hustle, charm and intimidate your way to the top of the pile and do whatever it takes to stay there. Empire of Sin’s gameplay is structured around three pillars:

Roleplay: Choose one of fourteen unique bosses based on fictional and real-world gangsters, then set out to build and manage your criminal empire in Chicago’s infamous Prohibition era. Go to the mattresses as Al Capone or Goldie Garneau and send the rest of Chicago’s underworld to sleep with the fishes!

Turn-Based Combat: Assemble a killer gang from Empire of Sin’s more than fifty recruitable gangsters and slug it out in turn-based combat to defend and expand your territory – or send a  message to opposing gangs.

Shacknews has reviewed the Strategy-RPG Empire of Sin:

Empire of Sin review: A strategy you can't refuse

Romero Games and Paradox Interactive's new strategy game takes players inside the criminal underbelly of Prohibition-era Chicago as a gang leader looking to take over the city.

Strategy games have run a gamut of topics over the years between fantasy, sci-fi, historic civilizations, and ancient and modern wars to name a few. There have been quite a few subject matters tread and retread in real-time, turn-based, and/or 4X strategy, but Romero Games and Paradox Interactive are using a very particular setting in their latest endeavor. Empire of Sin is a strategy-RPG hybrid that focuses in on the 1920s era of Prohibition in Chicago, when alcohol was illegal and criminal organizations were looking to build underground empires under the nose of federal law enforcement. Your role? An up-and-coming gang leader looking to create your own empire and take all of Chicago as your own. More than just adding another unique backdrop to the strategy genre, Empire of Sin brings tycoon and tactics gameplay to being a 1920s Chicago gangster in very fun and interesting ways.

There’s a lot going on in Empire of Sin. Romero Games and Paradox Interactive build quite a hybrid of business management, character growth, and turn-based combat, and the 1920s Prohibition-era backdrop makes for an interesting story. The gang leaders are varied in so many ways between their business, combat specialties, and personal stories. Meanwhile, the overall flow of business expansion, hostile takeovers, and diplomacy or confrontation with other gangs also makes for a mostly engaging gameplay loop. Empire of Sin doesn’t always keep it riveting. There are sometimes lengthy stretches of repetition in combat and business between the highs of the game and the stiff acting and character interactions are extremely noticeable. Even so, overall, Empire of Sin is a racket I’ll easily go back to over and over again as I figure out each particular crime lord’s path to an undisputed throne of 1920 Chicago’s booze biz.

How to manage an Empire of Sin:

There can only be one king or queen of Chicago. How you get there is up to you. Empire of Sin has a lot of roleplaying elements, including quests, missions, and different ways to customize your gangsters. In this video we show you how you can tailor your crew and your empire to suit your own play style.

RockPaperShotgun went hands-on with Empire of Sin and found it a game of four halves.

What you’ve got here, is your classic game of four halves. Empire Of Sin is a stats-based management game, about running the speakeasies, breweries, brothels and casinos of your chosen mob. It’s a turn-based squad tactics game, where you fight to take premises off other gangs, or for any one of a dozen other reasons. It’s an RPG, where you lead your growing bunch of naughties around the city streets, pursuing various story quests, and tooling them up with new weapons, equipment and skills. And of course, it’s a gang-based grand strategy game about taking over a city, where its heritage as a Paradox publication becomes immediately recognisable in diplomacy, warfare and so on.

And there’s more. It veers into being a close-up narrative game during boss-on-boss sitdowns, into citybuilding territory with its building upgrades, and even into the realm of Crusader Kings with its dozens of recruitable gangsters, all of whom have grudges, affections, ambitions and personalities.

PC Gamer reports on a new trailer for Empire of Sin as the game is set to release December 1st.

Now, developers Romero Games and publishers Paradox Interactive have confirmed a December 1 release date for the Prohibition era-set game, which features a mix of turn-based combat, empire management, and RPG elements. Looking and feeling like an entry in the Mafia franchise but playing more like an X-Com game, Empire of Sin as a whole so far looks as cool, glamorous, and vaguely threatening as Goldie Garneau's truly stunning outfits in the above pre-order trailer.

The Empire of Sin Twitter account has announced that the release date is being pushed back to Fall 2020.

Extra! Extra! Read all about it! We have an update regarding the release of Empire of Sin: 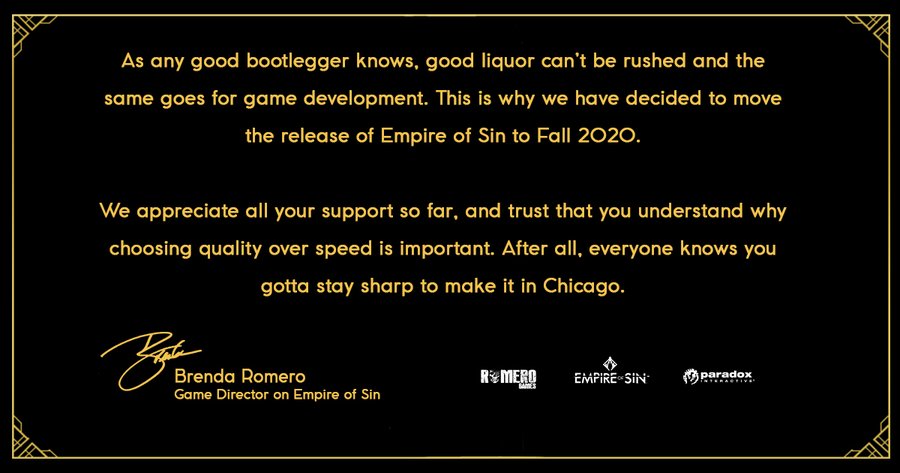 Empire of Sin - Preview @The Guardian

The Guardian took a look at Empire of Sin and ask what inspired it.

Empire of Sin is a passion project for Romero, Bafta-winning designer of the acclaimed Wizardry series. Its roots go back to her childhood in Ogdensburg, New York, a town just across the river from Canada. Ogdensburg is home to a bar, The Place, that is said to be the oldest continuously operating drinking establishment in the US, even staying open during the Prohibition era. How on earth did they get away with this, the young Brenda wondered? Not wanting to sour her daughter’s view of the police, her mother kept stumm – and unwittingly sparked a lifelong obsession. Romero’s husband and co-developer John (otherwise known as the co-creator of Doom) has a more direct family connection to the premise of Empire of Sin: Elvira Duarte, one of the game’s bosses, is his great-grandmother.

Empire of Sin is a rich and surprising simulation, split between a white-boxed city management perspective in which time passes continuously, and the grimy or glitzy distilleries, casinos and brothels where battles are waged. Everything hinges, however, on the production and sale of alcohol, your chief source of income. To safeguard your breweries while expanding your dominion, you’ll need to recruit gangsters from a pool of 60 characters that is shared between player and AI-controlled gangs.

@Gamasutra Brenda Romero talks about the relationship system in Empire of Sin.

Units can become alcoholics, fall in love with someone else, go insane from continuous violence, and even get a sexually transmitted disease. Each effect has different impacts on characters, if a unit falls in love and unit they fall in love with dies, they may go on a senseless rampage. It could affect their accuracy, their health, and their obedience in combat sequences. All these things, which Romero says are both superpowers and super weaknesses, can vary dramatically from playthrough to playthrough.

"It works the same way it does in the real world. So prolonged exposure to something, right?" Romero said. "People talk about love at first sight but odds are it's not going to work out. Prolonged exposure to a thing can either provoke a trait or cause a trait."

Gamereactor checked out Empire of Sin at the Gamescom and interviewed Brenda Romero:

We got our hands-on the gangster-filled tactics title and spoke to game director Brenda Romero at Gamescom.

We were sold on the prospect of Empire of Sin before we sat down to play it this month, with Romero Games' systems-driven tactics game brewed with a bunch of ingredients that we're rather partial to. The sales pitch of "Xcom meets prohibition-era Chicago" certainly resonated with us, and after talking to John Romero earlier this year, we were more than looking forward to getting our hands on the game.

In fact, generally speaking, that feedback holds true for most of what we saw and played in Cologne. Empire of Sin represents a smorgasbord of good ideas wrapped up in an excellent theme, yet it all feels a little loose and potentially repetitive based on the hour or so we spent playing. However, with the game not expected to land until Q2 of next year, there's plenty of time for the team to add more variety, smooth out the kinks, and balance the overall pacing of the experience. If Romero Games can do that, we're in for an absolute treat in 2020, and our fingers are crossed that Empire of Sin turns out to be just as good as its intoxicating pitch suggests it will be.

Empire of Sin - Announced for Spring 2020

Pladio spotted the strategy RPG Empire of Sin on PCGamesN:

Empire of Sin, the strategy game from Romero Games and Paradox Interactive, puts you at the heart of the ruthless criminal underworld of 1920s Prohibition-era Chicago. It’s up to you to hustle, charm and intimidate your way to the top of the pile and do whatever it takes to stay there. This character-driven, noir-inspired game puts players smack dab in the glitz and glamor of the roaring 20s, all while working behind the scenes in the gritty underbelly of organized crime.

PCGames tells us some more about the gameplay:

The new strategy game from Romero Games is garnering a lot of attention due to its XCOM-like combat, but after seeing Empire of Sin at E3 2019, it’s clear there’s a lot more going on under the hood to excite strategy gamers of all types.

Your goal is to dominate Prohibition-era Chicago. Starting as a lone mobster with no assets, you’ll grow your faction into a criminal corporation running everything from breweries to brothels. This involves both tactical and strategic decisions – commanding your units and managing your empire – and what makes Empire of Sin special is that there’s no schism between the two. You get to manage every aspect, from the abilities and weapons used by your crew, all the way up to your faction’s alliances and rackets.