As far as the schedule of Black Geyser is concerned, there are two updates. One is for the late backer option that ends on the 26th of December and the second is about the game being available in Early Access on the 24th of March.

And then there is also an update about the player stronghold.

For this update we wanted to show you something we’ve been working on. Our Stronghold system will allow players to have a base of operations. Strongholds are specific to each party role and class, with each of the four roles (Warrior, Wizard, Priest and Outlaw) getting their own unique area, and aesthetic changes to the Stronghold based on the player’s class within each role. While we’re not ready to show off the final in-game map yet for the Strongholds, we wanted to give players a sneak-peek into how our concept artist has worked to design our Stronghold maps. 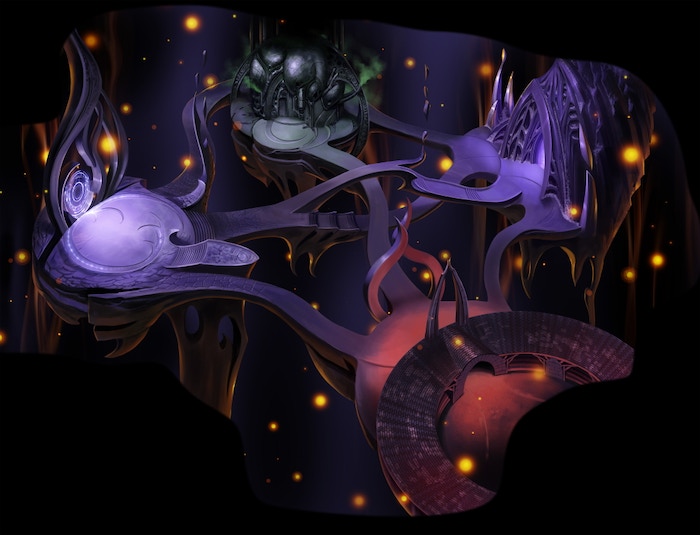 The image above depicts Locus, the Wizard stronghold. Clever players will find a way to summon a portal to Locus, deep in the woods south of Isilbright. Each area within Locus contains a puzzle, allowing you to further access the remaining areas (those walkways don’t start out as straightforward as they look here!). Once the puzzles are completed, Wizards will be able to utilize each of the buildings for a variety of purposes, and recruitable NPCs who are not currently in the party will make themselves at home so that it’s easier for players to enlist their services later without having to travel all over the world map.

As mentioned earlier, specific classes will see aesthetic changes to portions of their role’s Stronghold. Wintermages will find the Sanctum appropriate to their frosty pursuits after claiming Locus as their own.

Warriors and Priests will have more combat-oriented challenges to unlocking their Strongholds, while Outlaws will find themselves meddling in intrigue that affects the whole nation! Additionally, players who are not of the correct role for a given Stronghold will still be able to play through the quest related to each, so never fear about missing any content! As the game continues to develop, we will be showing you more information about the Strongholds you can call home.