The first dev blog for Broken Roads looks closer at The Moral Compass.

Before we dive into this, I have to preface that were only beginning alpha development now, so anything in this blog can change. We’ve got at minimum of 18 months or so until launch, a lot of testing, refining and designing still to do, and so please understand that by then a lot of things could be different to how they are right now! 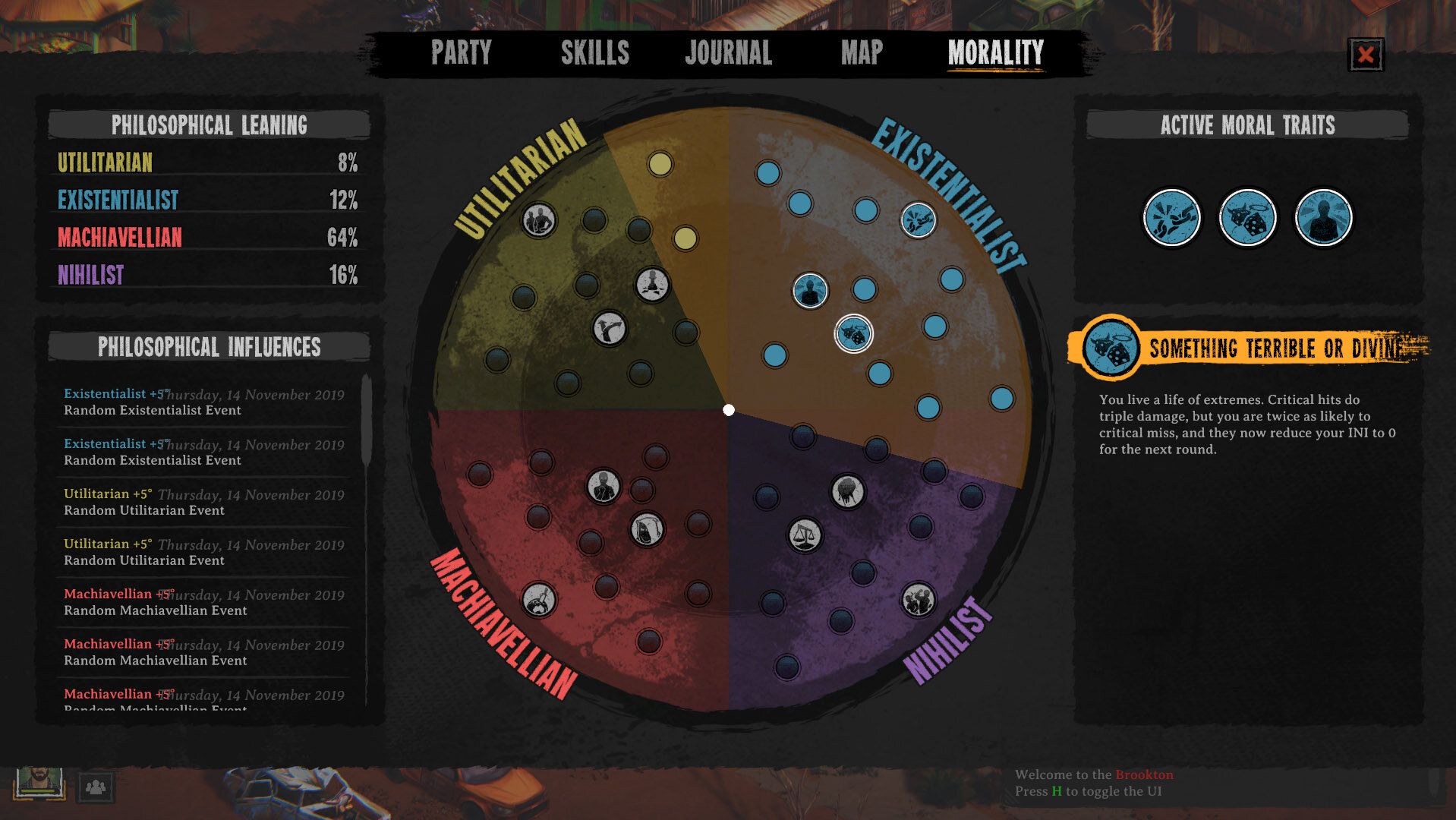 For the purposes of this blog we’ve added in examples of where decision points may be found on the moral compass - ll the smaller dots would not be in the actual game, but rather represent dialogue options or adventuring choices which may come up during play. Each decision is tracked, with a full history of your philosophical influences (“You chose to leave a stranger to die in the outback…”) as well as a percentage breakdown of where your choices were made in the different philosophical quadrants throughout your adventure.

The Moral Compass is an attempt to add more depth to the computer role-playing experience. Morality systems have largely ranged from a simple selection from a list of world views that is barely ever referenced again, to more deeply developed examples like what we see in Fable and Star Wars Knights of the old Republic.

Still, I felt that there was much more to explore here, in particular what it would be like if your character was actually of the world view you were role-playing. More specifically, I wanted to look at enforcing some kind of consistency of character so that your alignment was not quite so arbitrary – the easiest example would be how many role-playing games let you be noble in one quest and evil immediately after.

While obviously fun and allowing a lot of player freedom, it can also feel a little bit cheap and too easy to game when you can basically dictate which parts and which rewards you take on a whim.

The Moral Compass in Broken Roads was born of a combination of seeing this in many games, and a feeling I had for quite some time that games had so much potential to explore philosophy, and I worked at designing something to combine the two.

At character creation, you will be asked a series of questions that present moral quandaries or describe situations where there is no clear right or wrong solution. How you answer these will determine your starting position on the Moral Compass.

The compass itself is divided into four quadrants, which for now are utilitarian, existentialist, nihilist, and Machiavellian. Even these may change, but the intent here is not to have directly opposing moral positions and have things quite simply ‘you are good or bad if you are here or there’, but to present a range of attitudes towards being in the world.

As you go through the game, certain choices, dialogue options, quest or adventuring decisions and the like can have a moral component - of course they don’t all, as a lot of conversations just conversation - or relates to a particular world view. These options are all located somewhere on the moral compass. Your character’s philosophical leaning is marked by a white dot, and there is a golden arc extending around that point, which is their World View.

Your range of possible options that you can choose from is determined by your World View. If you make a decision on the fringes of your World View, your philosophical leaning will shift slightly towards that direction. You may also find that the dot which marks your current position moves more towards the centre of the compass, widening the golden arc. Alternatively, if you make choices very close to your current philosophical leaning, the white dot will move more towards the outside of the compass, and your World View will narrow. This is intended to simulate broad mindedness and narrowmindedness, as you have a character who is either open to a wide range of ideas but not necessarily focused on any particular system of thought, right through to somebody who is incredibly focused and possibly rigid in their ways of thinking.

While being broadminded opens up more options for you, it does prevent you from benefiting from particular moral traits and attitudes that are dedicated individual may be able to enjoy.

Moral traits in Broken Roads behave like unlockable skills or talents which you can have active when they are within your worldview. If you look at the moral compass you’ll see an inner darker ring, and an outer light to ring, which marks the difference between higher-level and lower-level moral traits. Higher-level and lower-level here simply refer to if you’re focused enough to have your philosophical leaning such that you are in the lighter area of the circle.

Moral traits generally provide bonuses and penalties that range from simply unlocking more dialogue options, through to allowing the use of certain weapons, or temporarily providing extra talent points or buffs to your base attributes. Here as well we don’t want things to be too easy: many traits bring with them some kind of detriment as well, ranging from combat penalties to outright preventing choices from certain moral quadrants while active.

One of the things we are conscious of and have been working to balance from the beginning is ensuring that it all stays fun. There is a lot of work to be done to ensure that a mechanic that limits player choice does not feel restrictive and actually ends up feeling hindrance. How we solve this really will just come out of the next six months or so of testing internally. Perhaps we find that were able to balance this with a slightly wider golden arc and players don’t feel restricted in fact enjoy the forced role-playing that this adds, or perhaps we find that we should give players the option that their World View perhaps determines only their available moral traits and certain bonuses/penalties, but still allow all dialogue/quest options even if they are outside of the golden arc. And hey, perhaps the system is already close to working just fine as designed (because that’s how game dev always works you know). Watch this space – we will be posting updates as we go.