So mark your calendars!

And now, onto our third feature video, which is about the technology and special abilities available through the Elite Guardian Suit of Nora Harwood.
loading...
Nora’s Elite Guardian Suit can be upgraded in various ways. The suit’s offensive capabilities allow Nora to unlock skills such as the Forcefield which acts as a makeshift cover during battle, blocking enemy attacks but allowing Nora’s shots to pass through. The forcefield can also be upgraded to withstand even stronger enemy fire and at its highest level, it can be deployed faster so Nora may truly shape the battlefield to her advantage.

Shield Overload is another offensive ability of the Elite Guardian Suit that discharges all of Nora’s shields, destroying everything in her immediate vicinity. However, Nora needs to be careful about utilizing the overload ability, as it completely fries her personal shields, leaving her completely defenseless. For that reason, if Shield Overload is applied at the wrong time, Nora may quickly find herself surrounded by enemies and without the means to protect herself. 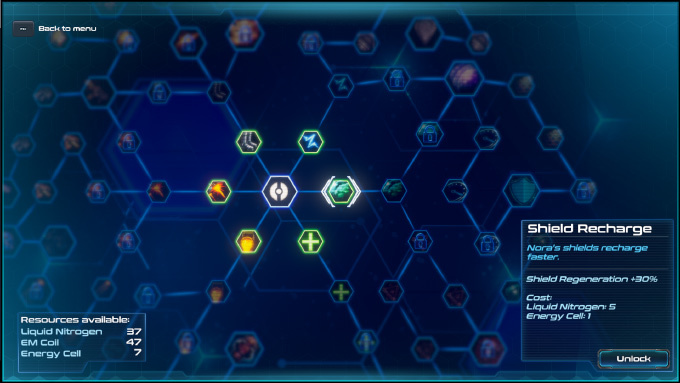 The Rush ability is a mix between an offensive and an agility-based ability. When activated, Rush allows the suit’s wearer to move and attack faster. For the duration of Rush, Nora can sprint endlessly without fatigue, allowing her to run for cover or surprise an enemy at the far side of the battlefield.

These are just a few ways Nora can upgrade her suit, its capabilities are numerous and the ways they can be combined together allow Nora to truly decide how she wishes to approach each conflict.

And that concludes our Secret Documentation series! In the name of EverReach Industries and our Security Division, we welcome you to Eden next week!