Ave! Welcome to our second DevDiary for Expeditions: Rome. In our previous DevDiary (link here), we covered the vision for Rome and what the game is about overall. We also discussed this live in our first DevStream which you can watch a replay of here (link here). For DevDiary 2, we’re going to get a little more specific and take a deep dive into our core combat system. So gear up and let’s get started!

Combat in Expeditions: Rome is predominantly expressed through turn-based tactical gameplay. While the legions fight the bigger battles for you on the world map, you and your elite team of praetorians will engage in tactical close-quarters fights on a hex-grid layout using a variety of skills and items.

Let’s start with the basics: Turn-based combat starts when you encounter enemies, so you can explore the area in real-time after any fight, and often before a fight begins as well. Once a fight starts, the very first turn of combat is what we call the preparation phase, where you can strategize and position each of your combatants on the hexes that are available before initiating combat. Once you’ve chosen where your characters will start, it’s time to get into the fight.

During combat, you can move each character, activate skills, and use any tactical items you have equipped. The amount of movement a character can make is based on how much armor they’re wearing, which grants them a certain number of movement points. If a character wants to move farther, they may have to sacrifice their ability to take certain actions. 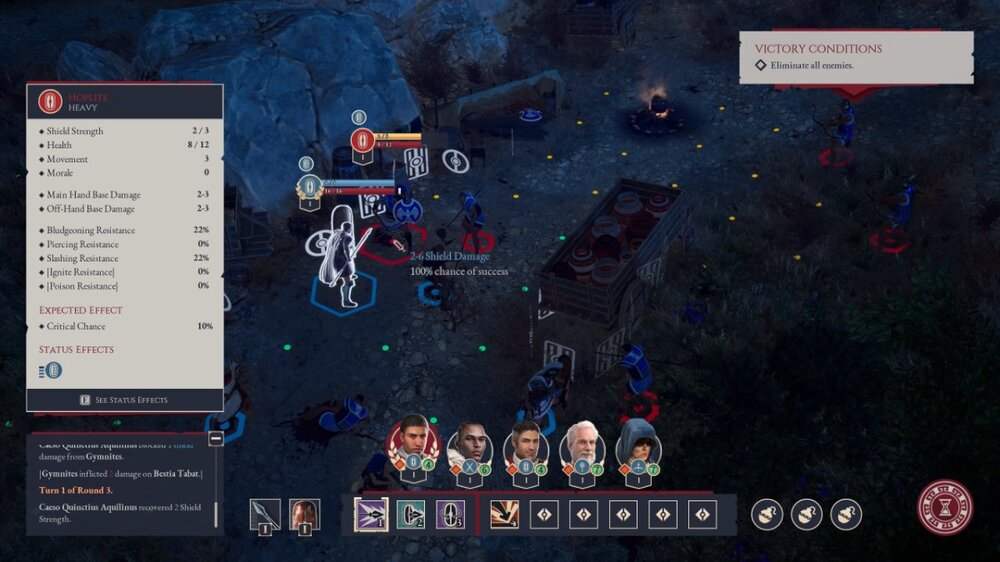 Most character actions are executed via skills that are made available by either their weapon or their class. Unlike our previous Expeditions games, we no longer have basic “white” attacks. Instead, every attack is executed through a skill, and each weapon has a collection of skills it can roll with. This means that you can acquire two different Gladiuses, for example, and the skills available can be completely different, providing a ton of variety.