The background of the companion Khaldun has been shared  by the The Waylanders team.\

Khaldun is in her mid twenties, and is intelligent as hell. The eldest daughter of a noble family in Meroe, in The Kingdom of Kush, she was sent to Egypt as a young teenager and educated in the best schools Alexandria could offer. She relocated to Brigantia with Queen Escota and Prince Lugaid five years ago. Khaldun can read, write, and speak nearly a dozen languages, and can tell you anything about the vast pantheons of Nubian & Egyptian gods and goddesses without checking reference materials. 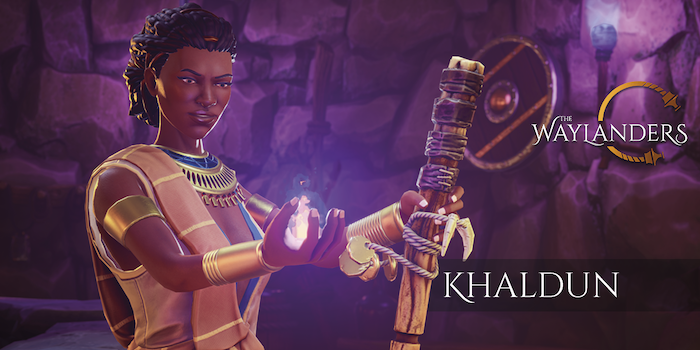 Khaldun prefers to wear clothing styles that reflect her adopted Egyptian culture. These costumes and styles may seem foreign and overly elegant to her Celtic peers, but Khaldun doesn’t mean them that way, and she doesn’t care. She is proud of her heritage.

Her necromantic powers come from her unwavering faith in the Egyptian pantheon, and she is a devoted priestess to the god Osiris. This may put her into direct conflict with some of your devout Celtic party members on occasion.

Khaldun views sex and romance quite separately. She’s generally down to play a little, but if you want to fully romance her, she wants you all to herself. She’s had a few bad experiences with some open relationships since moving to the land of the Celts, and she needs to know that she’s your one and only. If you’re not willing to commit to her, and only to her, she won’t have any reservations about ending things. But if you do commit, she is a powerful and loving partner.