Pathfinder: Wrath of the Righteous - Interview With the Queen

A new update for Pathfinder: Wrath of the Righteous presents a quasi interview with Queen Galfrey.

The Absalom Reporter presents its readers with an exclusive interview with Queen Galfrey, ruler of the northern kingdom of Mendev, leader of the crusaders guarding the borders of the Worldwound, and illustrious servant of Iomedae. 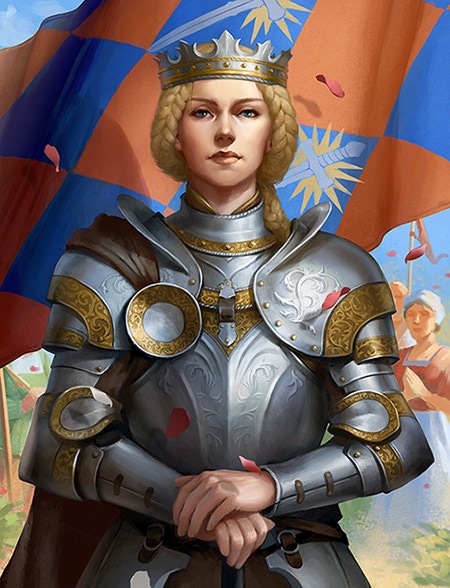 Greetings, Your Highness! Thank you for agreeing to this interview.

Greetings to you and your readers. I don't usually have time to converse with bards, chroniclers, or the press, but if this interview attracts even a handful of new recruits to the ranks of the crusaders, then it is my pleasure.

Today you are famed throughout Golarion as one of the leading lights of the church of Iomedae. Many people call you "the Sword of Iomedae." However, some of our readers will be unaware that you started out as a paladin of another deity, Aroden, who was taken from us, to the profound sadness of all his faithful.

That is correct. Sometimes even I am surprised by how young the church of Iomedae is. And by how long we have been without Aroden. The beginning of the last century was a difficult time for me. I had lost my father and my god, I was crowned queen, and then the gates to the plane of chaos burst open right on the borders of my kingdom. Iomedae took up her heavenly post at that time, shouldering the heavy burden of protecting all mortalkind as Aroden did before her. My faith in Iomedae was my salvation. If you will permit me to wax poetic, finding my faith in Iomedae was like drowning in a raging sea and suddenly finding granite beneath my feet, raising me up. That’s what my faith in Iomedae means to me.

That leads us to our next question. You are more than one hundred years old, Your Highness. There are few substances on Golarion capable of extending the natural lifespan of any given race. It is assumed that you use one of these substances to prolong your life: the extremely costly and extremely rare sun orchid elixir.

I make no secret of it. The decision was taken by the church of Iomedae. You can ask the leaders of the church for further comment if you wish to know more about the reasons behind the decision. But the long and short of it is that the church feared the disorder that a change in leadership would bring while Mendev was embroiled in a war against the demons. For myself personally, this forced longevity is not a boon, it is a necessity, one that is bound up with my duties as the leader of the crusade.

Your Highness, our next question may seem provocative, but we would be remiss not to ask it. Many of your political opponents see your prolonged life as a power play. Some even go so far as to claim that you are exploiting the situation with the demon invasion to hold onto the throne of Mendev, your youth, and control over the flow of money funding the crusades from wealthy supporters.

My "political opponents" clearly have a low opinion of both my moral rectitude and my intelligence. Amassing power in a country that at any moment could be wiped off the face of Golarion by hordes of demons from the Abyss? I would rightly call a fool anyone who came up with such a scheme. And I say "fool" rather than use more strident language that is beneath the dignity of a monarch.

That is not an outright denial, Your Highness.

You would prefer a more direct answer? Then, of course, I deny it. I am not selfishly holding on to the reins of power, I am not treating the crusade coffers as my own personal bank, and I have no intention of living forever. Whoever is making these wild claims clearly has no understanding of the concept of duty. I, however, do. I have a sacred duty to my people, to my goddess, and to all Golarion.

The other argument that is often put forth in these debates is that Mendev is hosting too many foreign fighters. Volunteers flock here from all across Golarion to fight in the crusade. Crusaders do not answer to the government of Mendev, but to you personally, as the figurehead of the crusade movement and the leader of the paladins of Iomedae.

I must correct you on that point—the troops fighting in the crusade do not all answer to me directly. Far from it, in fact. For instance, the Hellknights are wholly independent and act as an allied force. I merely coordinate the actions of all the crusade troops.

And yet you still wield considerable influence over this massive military force.

Remind me to make your newspaper office my first target when I reveal my true visage and declare myself the tyrannical eternal queen of the entire continent. But that moment has not yet arrived, alas. Until then, I must continue battling the unending hordes of the Abyss. And thank Heaven that across all Golarion there are brave souls who are willing to leave hearth and home to defend our world.

It must take a special kind of person to do that.

Yes. Indeed it does.

Thank you for taking part in this interview, Your Highness.

Conducted exclusively for The Absalom Reporter by Dessi Kiess.

Pathfinder: Wrath of the Righteous